Brentford have made a mark on their return to the English Premier League. The team managed by Thomas Frank finished 13th in the 2021/22 season and is now looking for a top-half finish this season. The Bees have performed well on the big stage and are likely to play three consecutive seasons in the English Premier League. They have earned victories over the likes of Manchester City, Manchester United, and Liverpool. Brentford now sits eighth in the league table, ahead of Liverpool and Chelsea. One of the reasons why the Bees have entered the top half is their current form. They are unbeaten in their last eight English Premier League games. Thomas Frank’s men have proved to be quite dangerous for the opposition. We now look at some of the stats that show how the team has fared in their last eight matches. 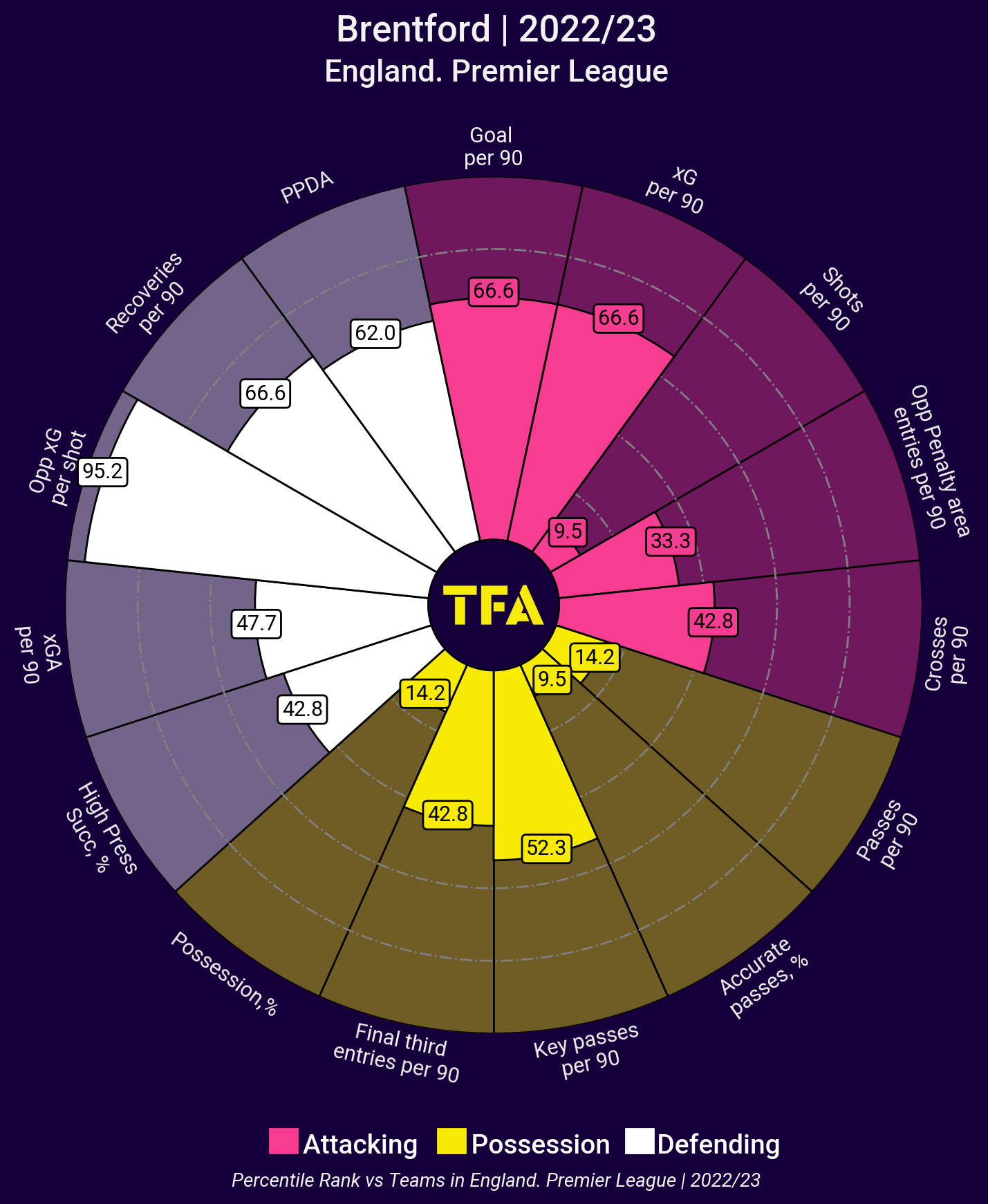 Brentford have won seven, drawn nine, and lost four matches this season. The Bees have scored 32 goals and conceded 28 in total. They average 1.56 xG and 1.44 xGA per match. The above viz shows the percentile rank of the team in comparison to other teams in the English Premier League. It can be observed that Brentford are ranked decently for scoring goals and their xG. The recovery rate and key passes per 90 minutes are also on the high side. In other areas, Brentford tends to struggle and have a low percentile rank.

Brentford’s eight-match unbeaten streak includes four wins and four draws. The Bees have recorded victories against the likes of Manchester City and Liverpool. In the first 12 matches of the season, Brentford earned only 14 points. In the last eight matches, they have earned 16 points.

Clinical in front of the goal 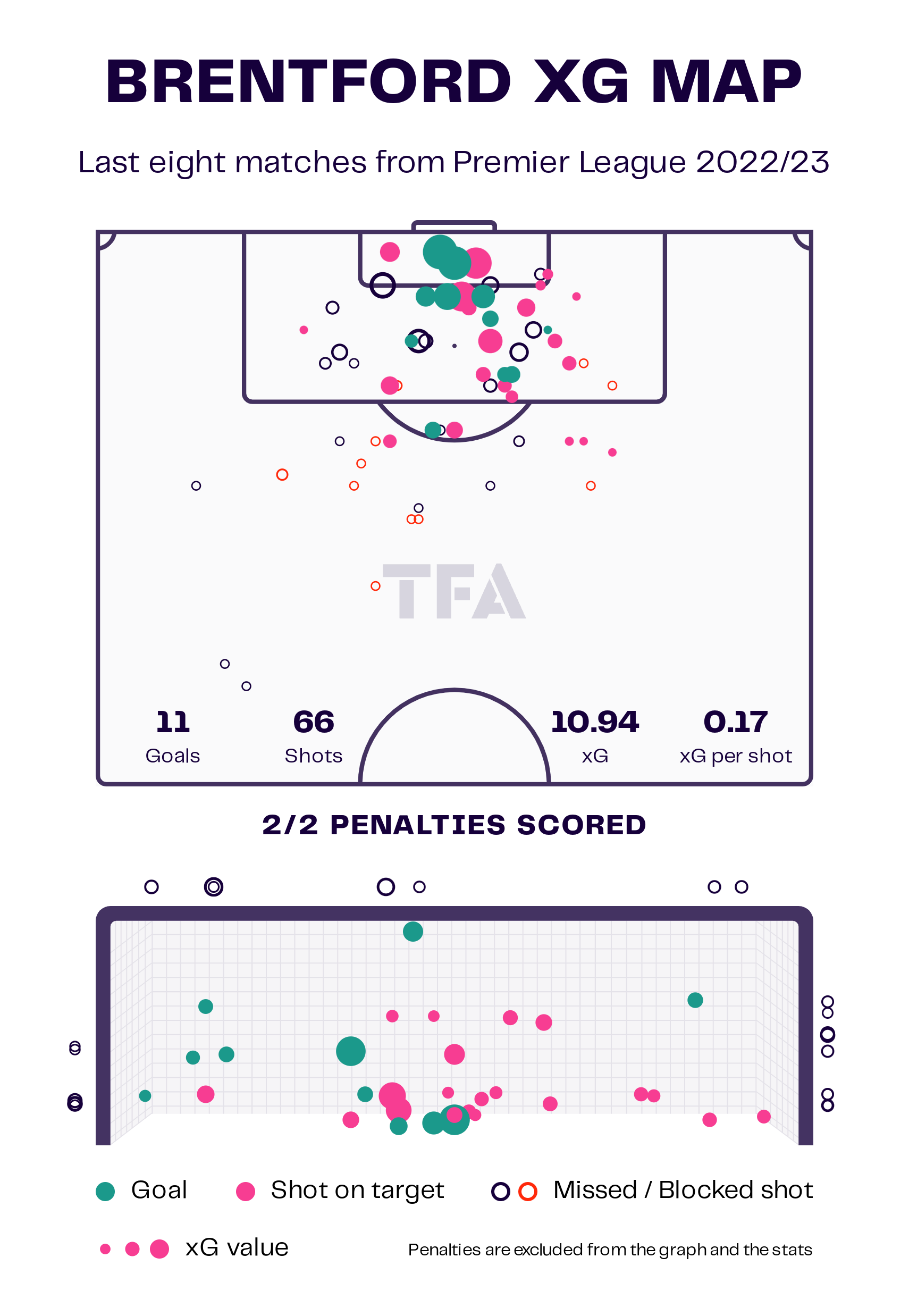 The team led by Ivan Toney and Mbeumo in the attack has scored 13 goals in their last eight matches. The above viz shows the team’s shot map from their last eight matches. They took 66 shots during that period and managed to hit the target 31 times. Of the 13 goals scored, two came from the penalty spot. One of the key observations that could be made from the above viz is about Brentford’s goal-scoring areas. They have managed to find space inside and on the edge of the opposition’s six-yard box and score a few goals. 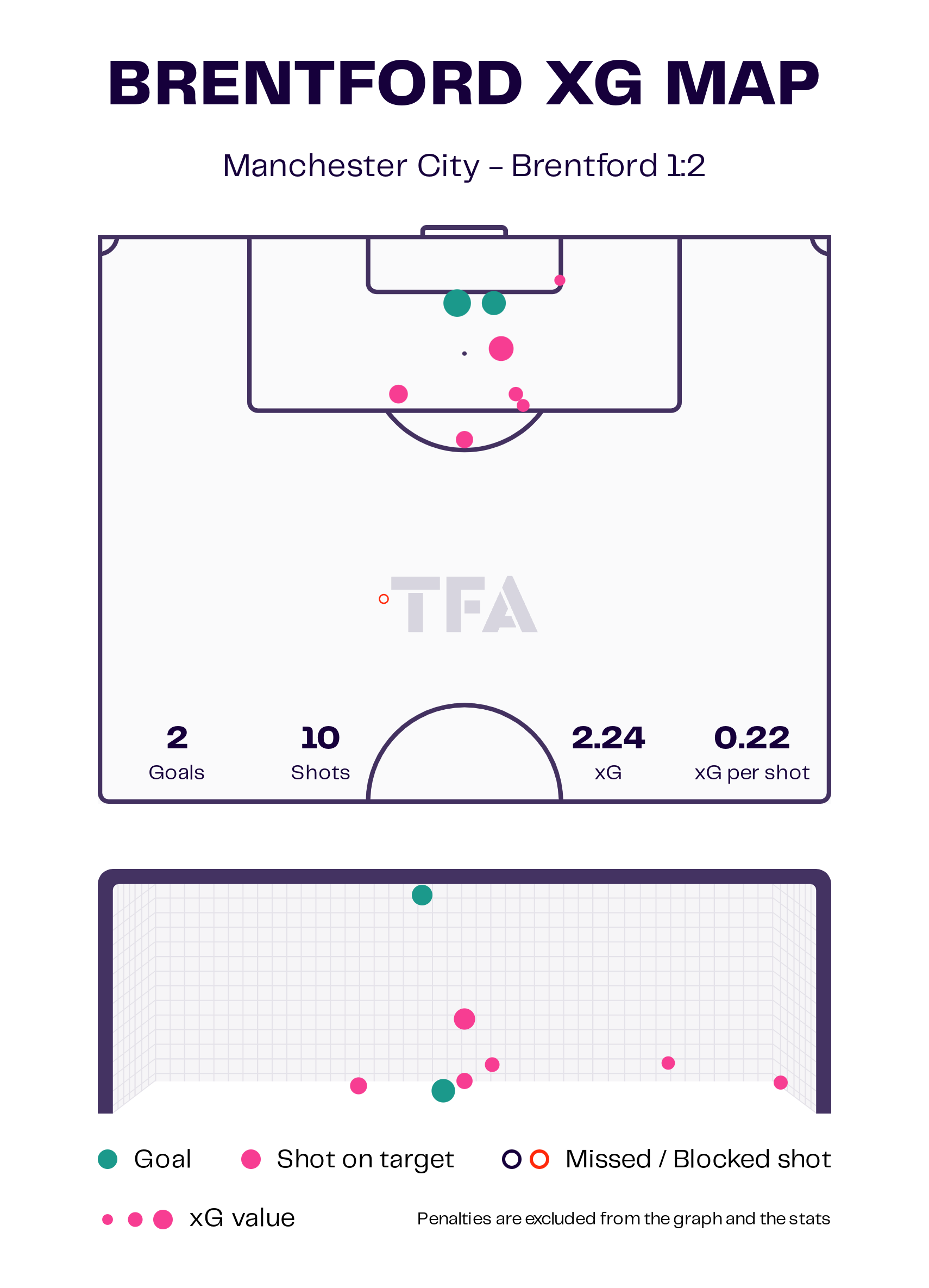 Brentford’s unbeaten run started before the World Cup. They went into the international break after a thrilling 2-1 win over the defending champions at the Etihad. Ivan Toney scored a brace and handed the Bees a famous victory in injury and stoppage time. The Bees created a lot of threats in that match. They attempted ten shots, and eight were on target. The xG rate was also high, at 2.24. 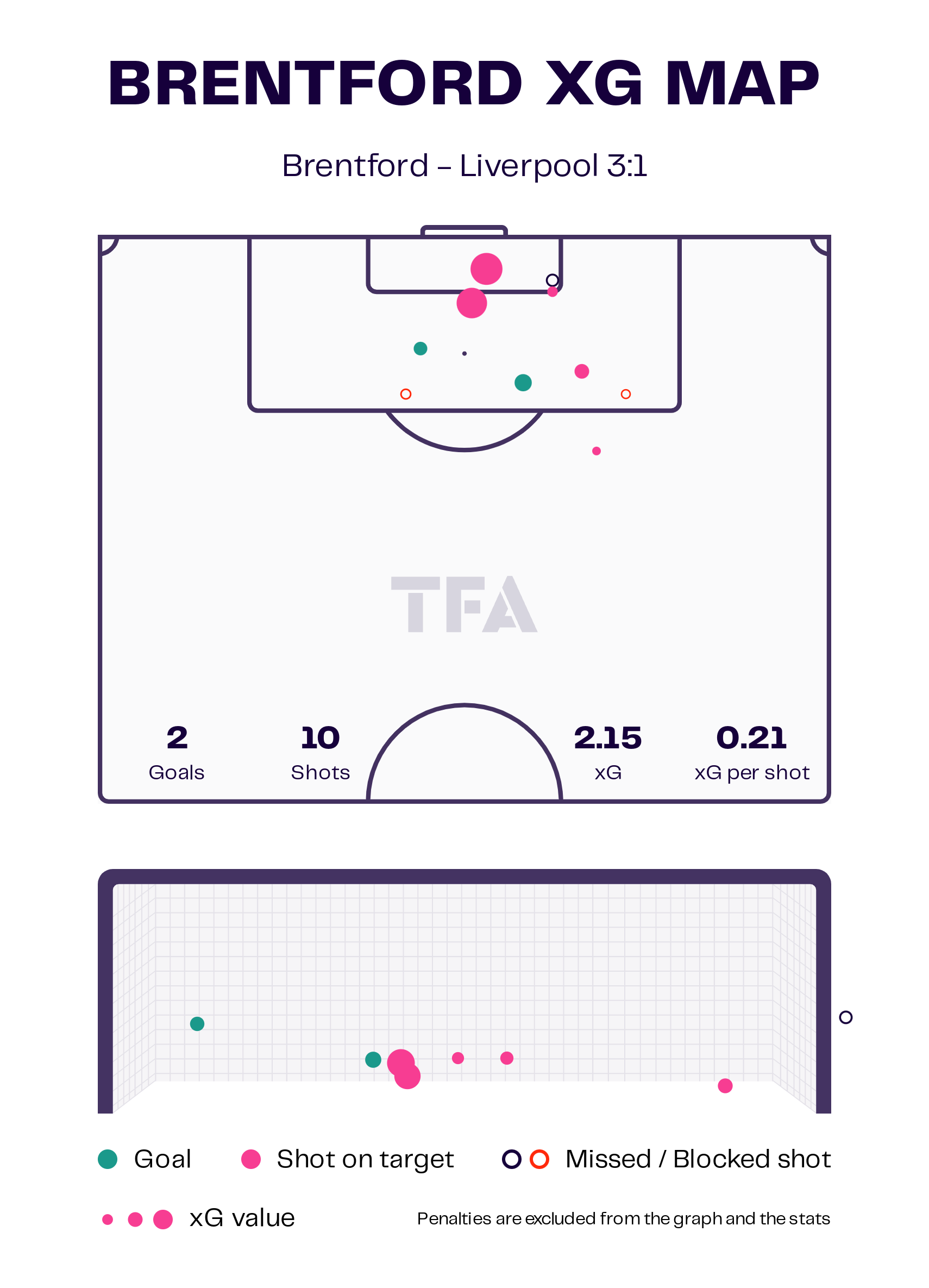 The Bees started the new year with a 3-1 win over Liverpool. Ibrahima Konate scored an own goal for Liverpool in that match. The Bees once again created a lot of threats with the attacks they made. They attempted ten shots, and seven were on target. Once again, they had a high xG rate in the match. These two results were important for the Bees, as this could give them the confidence they need for a top-half finish in the 2022–23 season. 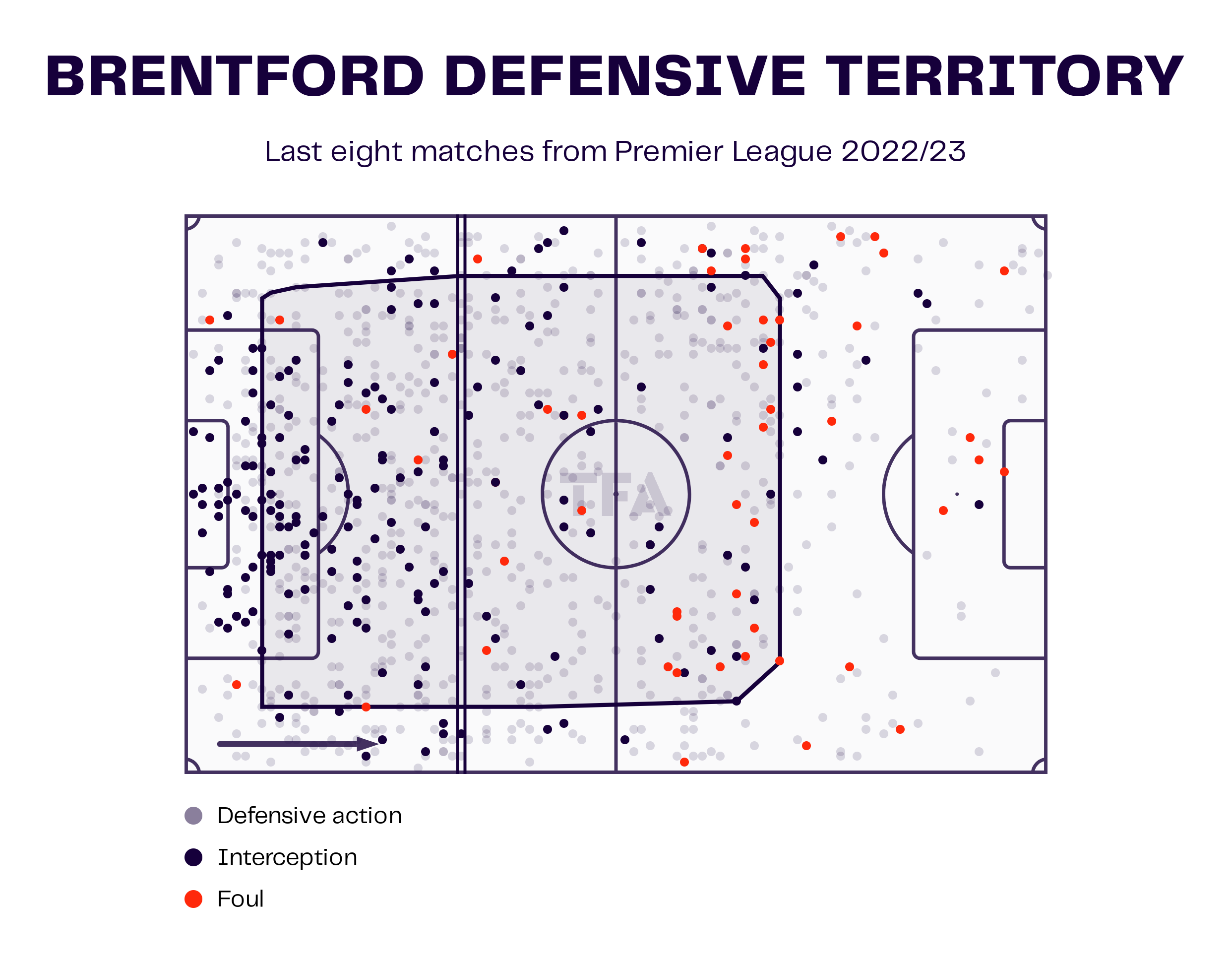 The Bees have conceded seven goals in their last eight matches and kept three clean sheets. There is a significant improvement in the stats, as the team had conceded 21 in their first 12 matches. One of the primary reasons behind their improvement in the defensive record is the ability of the players to read the opposition’s play. Brentford players have started to make more interceptions, and that breaks the momentum of the opposition. They average 48.45 interceptions this season. In the last eight matches, the average was 49.37 interceptions. Notably, they made 63 interceptions against Liverpool, 74 against Spurs, and 80 against Manchester City. The above viz shows that the majority of the interceptions have been made inside the penalty box. Brentford also have shown some discipline and have given few fouls in the dangerous areas. 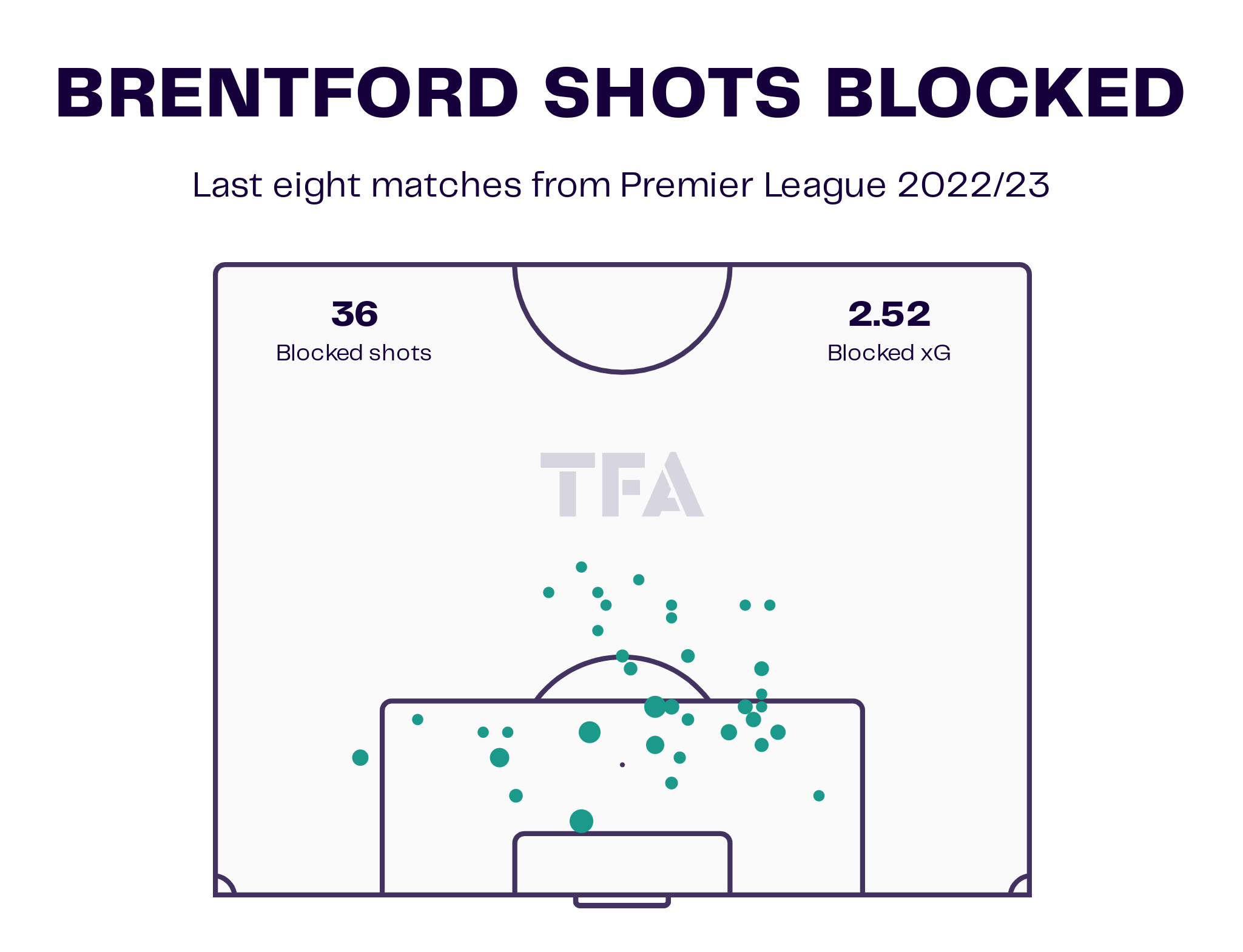 The defensive contributions also include 36 shots blocked in the last eight matches. These blocks have been made either inside the opposition’s penalty box or on the edge of the penalty box.

The 1×2 odds for Brentford are likely to decrease against the teams that are ranked below them or are struggling with form. Against tougher opponents, the odds rate is likely to remain high. However, with the team showing some spirit against the top teams, one can try their luck by putting bets on Brentford.

Brentford are looking like a mid-table English Premier League side. They have caused some upsets and are sitting comfortably above the relegation zone. Thomas Frank would be happy with the display shown by his team. They will look to create more upsets and finish in the top half of the table.

Under the microscope: How Eddie Nketiah has replaced the injured Gabriel Jesus in Arsenal’s title challenge