Tottenham Hotspur had a strong start to the English Premier League 2022-23 season and were in contention to finish in the top four. They were comfortably sitting behind Arsenal and Manchester City in the league table. However, a sudden dip in form cost them a place in the top four, and now they are eager to get back in contention to play in the UEFA Champions League next season. One of the reasons why the team is struggling is because of the attack of their forward players. Harry Kane is their only attacker who is netting goals. Son Heung-Min, who was their top goal scorer and Golden Boot winner last season, has struggled to make much of an impact this season. Richarlison and Kulusevski have struggled a bit with injuries and have failed to earn a regular spot in Antonio Conte’s side. In order to improve the attacking department, Tottenham Hotspur are targeting Roma’s 23-year-old attacker, Nicolo Zaniolo. The Italian has been on the wishlist of a few clubs, and Spurs have emerged as the favourites to sign him. Dejan Kulusevski’s loan spell will end at the end of the season, and that will be a positive for Zaniolo as it ensures him more game time. We will now look at some of the player’s stats to see why Spurs are interested in the Italian forward. 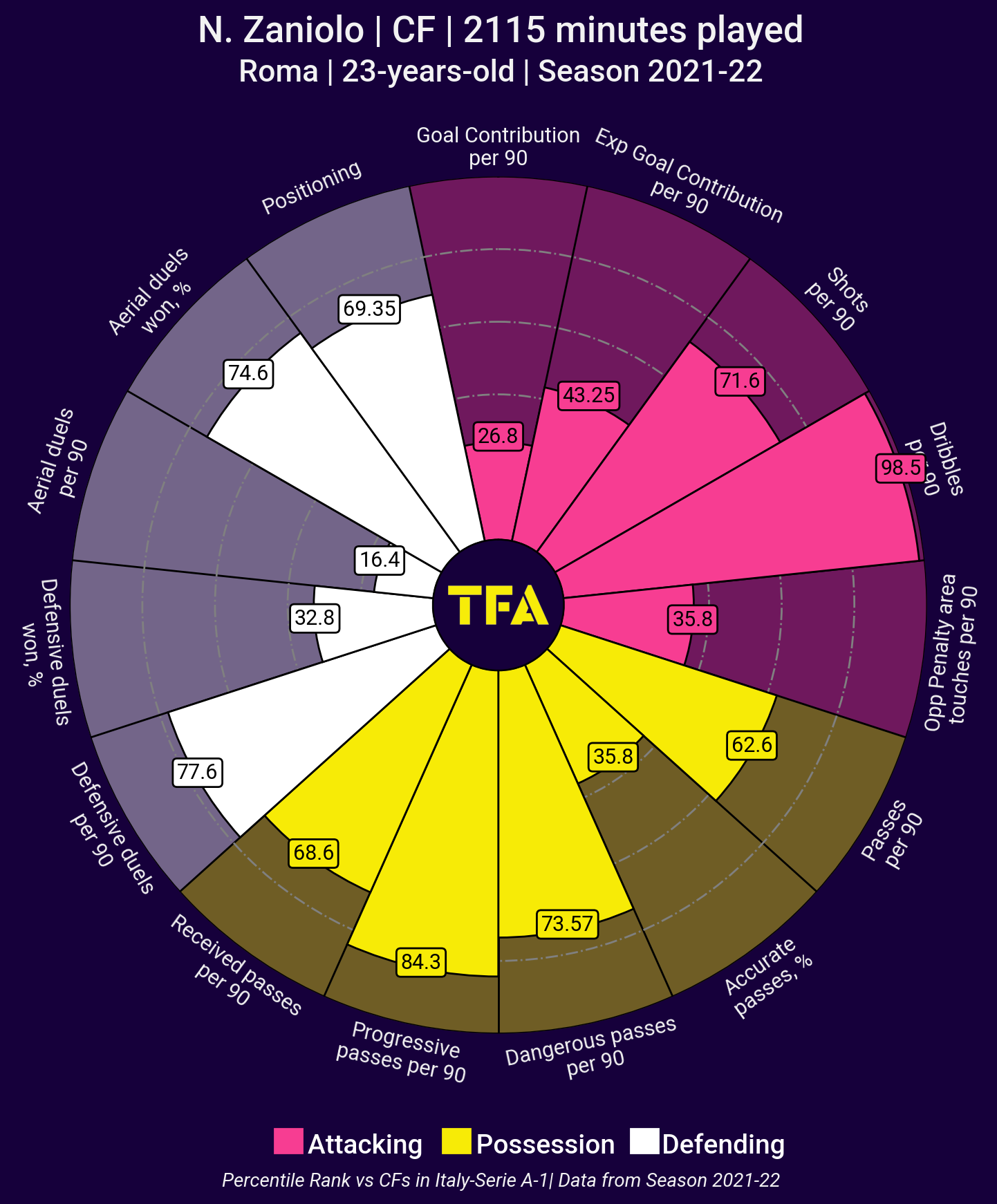 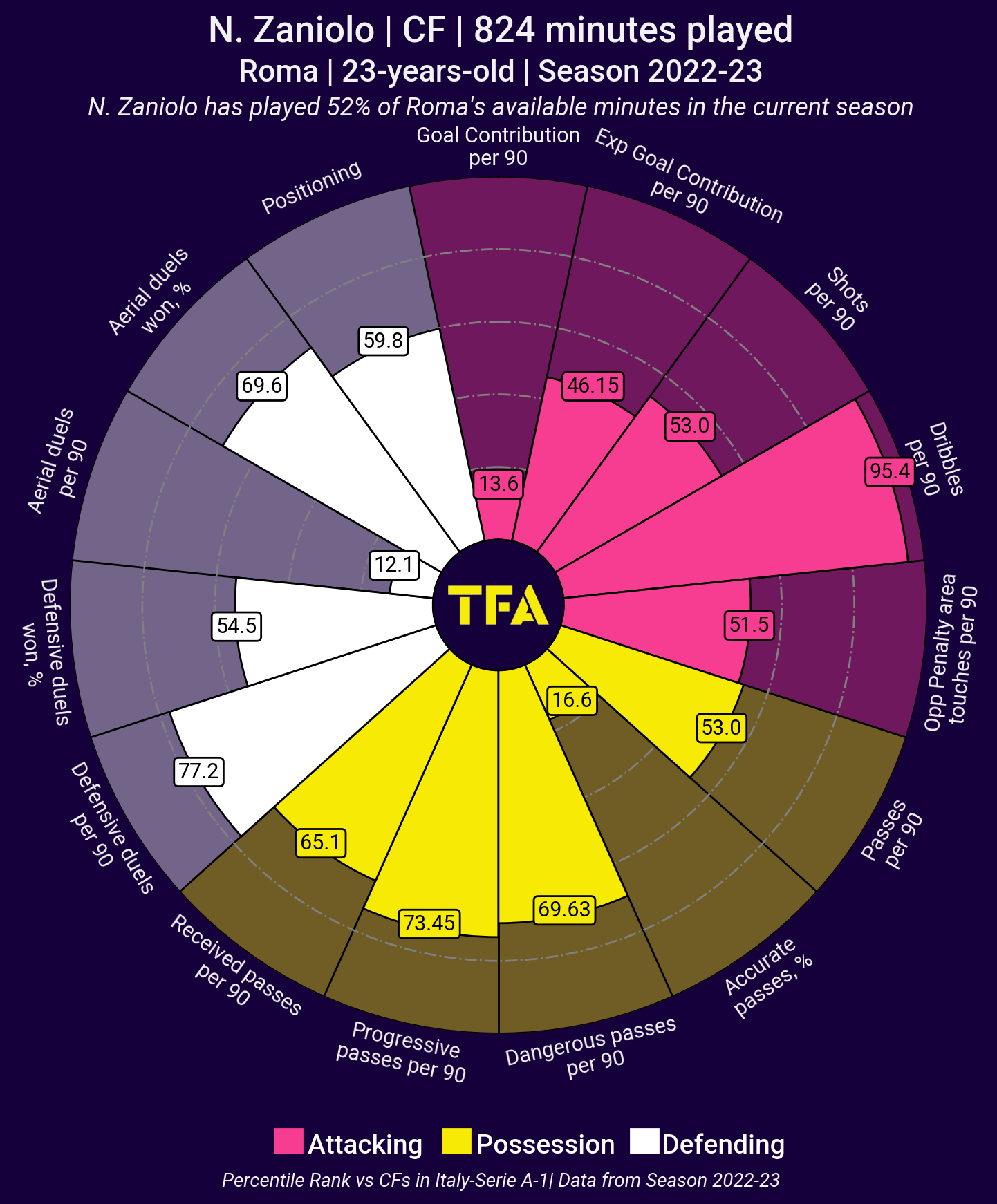 Threat from the right-wing 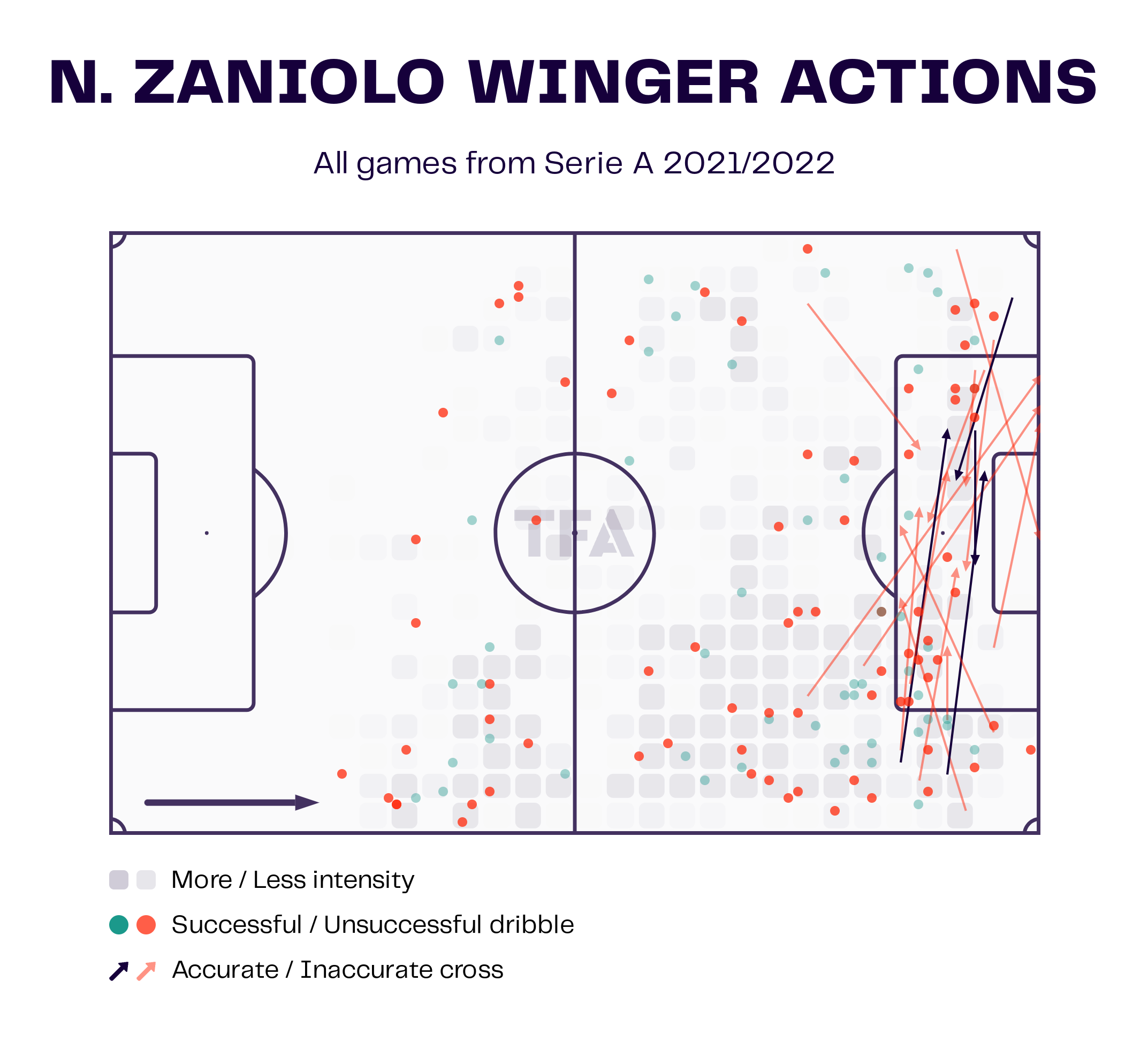 Nicolo Zaniolo runs down the right side for Roma. He likes to dribble past opponents and deliver a few crosses that could result in a goal. The above viz shows the winger actions of the player from last season. He averaged 8.2 dribbles per 90 minutes and had a 45.1% success rate. His success rate is high on the edge of the opposition’s penalty box. However, one area where he falls short is in cross-field accuracy. The 23-year-old averages 2.3 crosses and has a low accuracy rate of 16.7%. 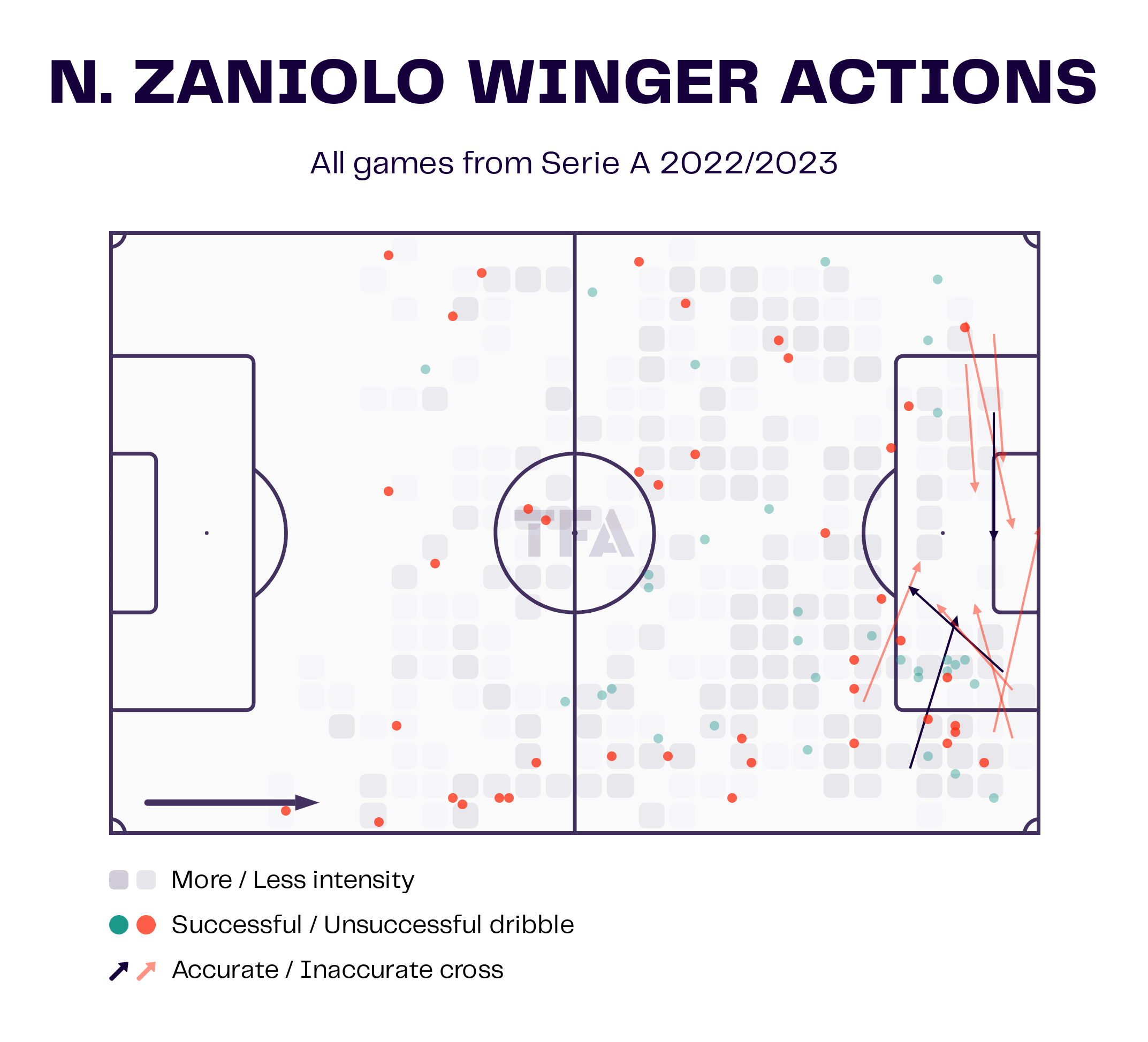 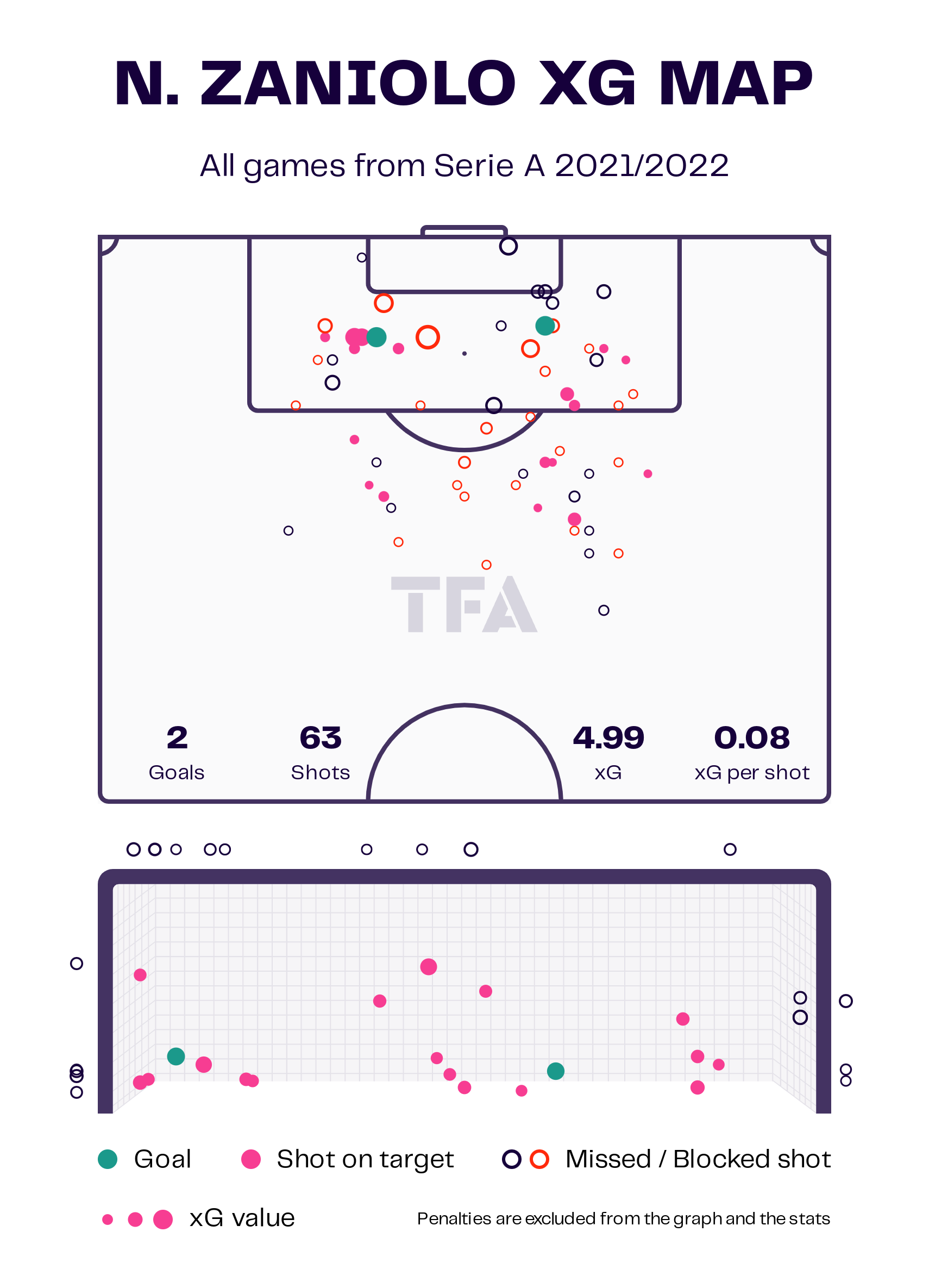 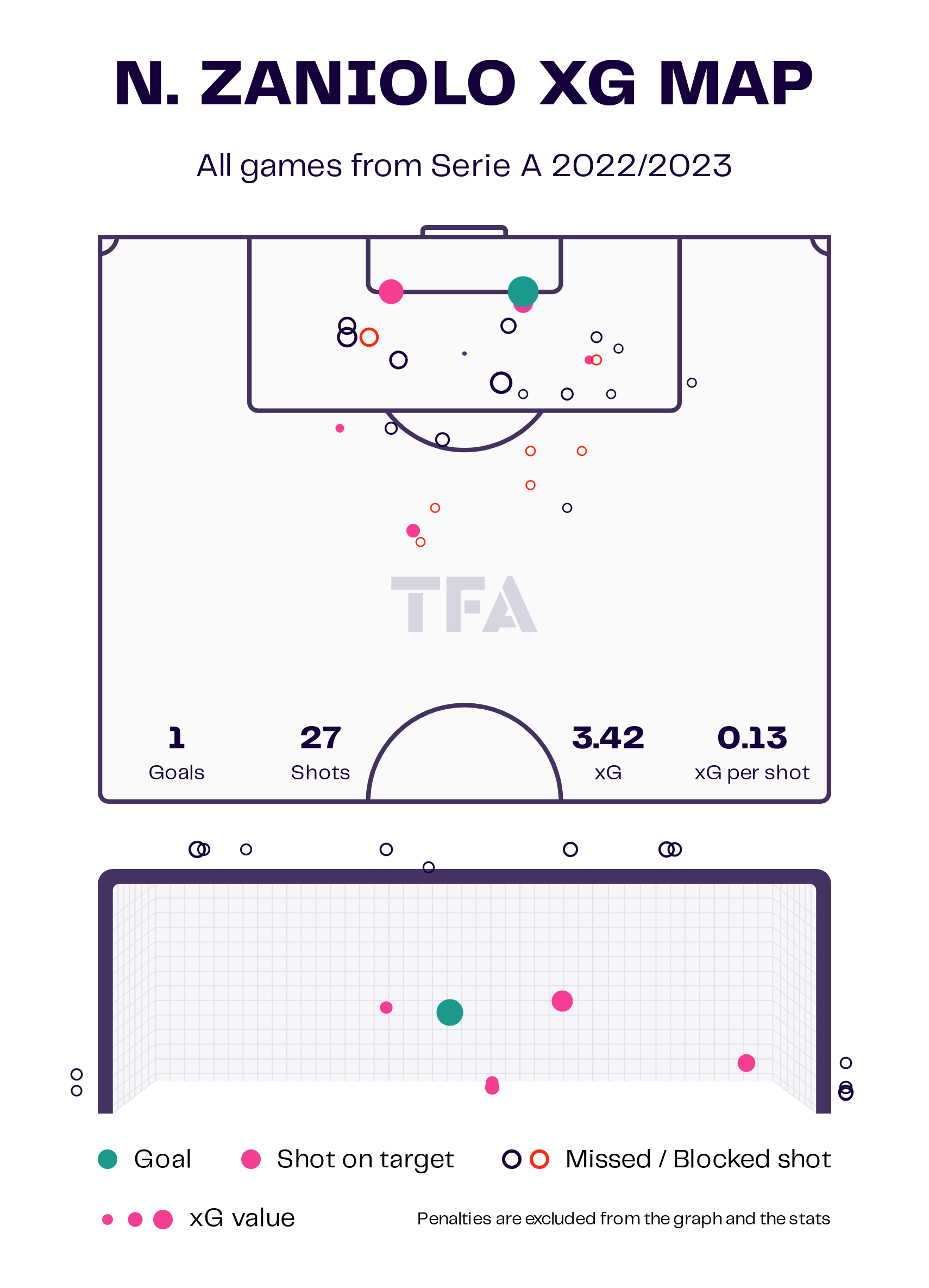 Nicolo Zaniolo is not known for scoring goals. He scored two goals last season and one this season. The above two visuals show his xG map of the last season and the current season. Last season, he averaged 2.68 shots per 90 minutes with a 30.2% accuracy rate. This season, the number of shots averages 2.54 with a 22.2% accuracy rate. Zaniolo likes to cut inside on his favourite left foot and attempt a shot. Mostly, he has been off-target. 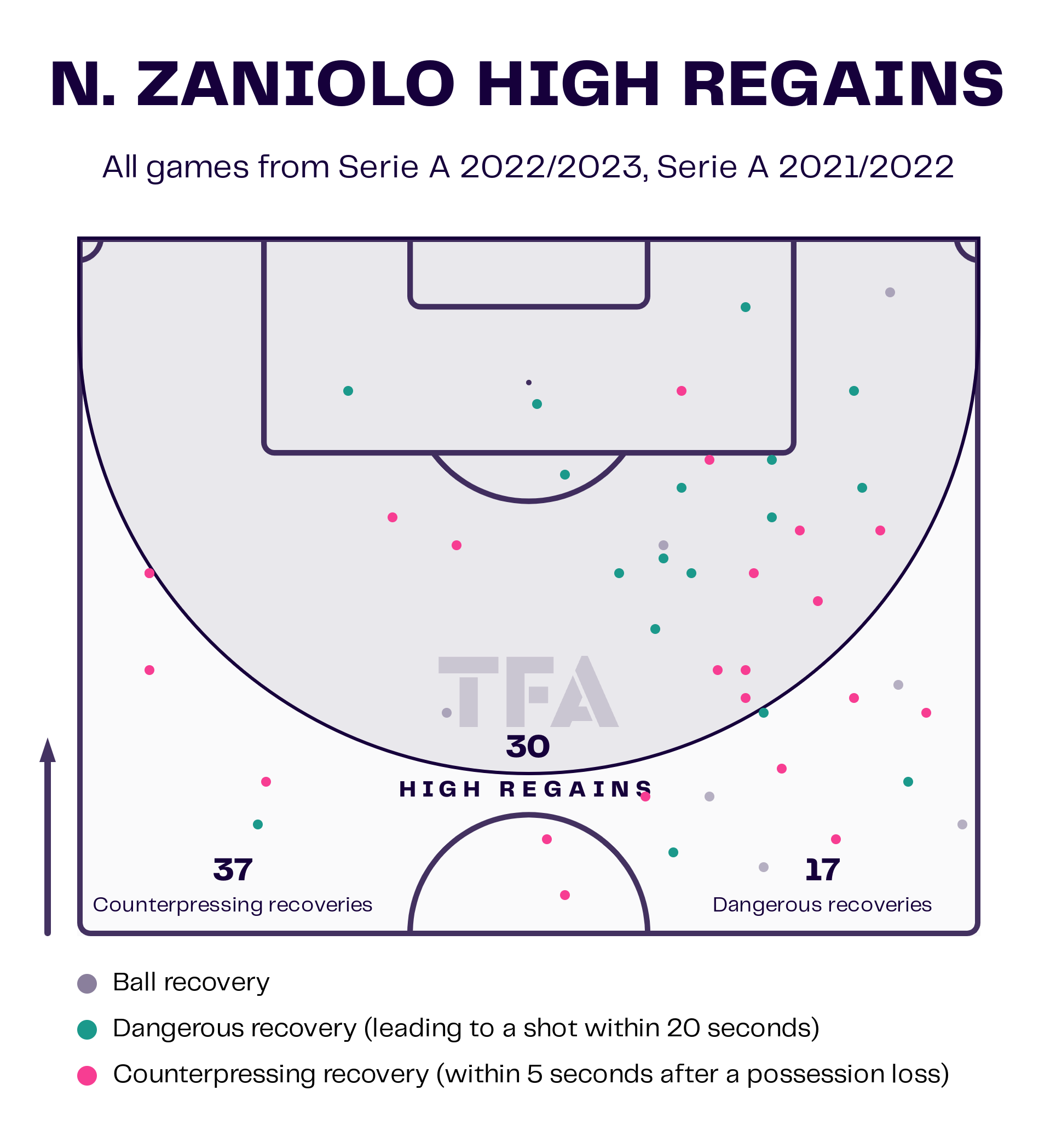 One of the areas where Zaniolo provides an extra edge to the attack is with his ability to recover the ball. He averages 2.92 recoveries this season, and last season the recoveries per 90 minutes were 3.06. The above viz shows the high recoveries made by the player in the current and last seasons. The player has made dangerous recoveries just outside the opposition penalty box on most occasions, and these have led to a shot within the next 20 seconds. This shows that the player has a high work rate, which is what the crowd would demand from their new signing.

A perfect replacement for Kulusevski? 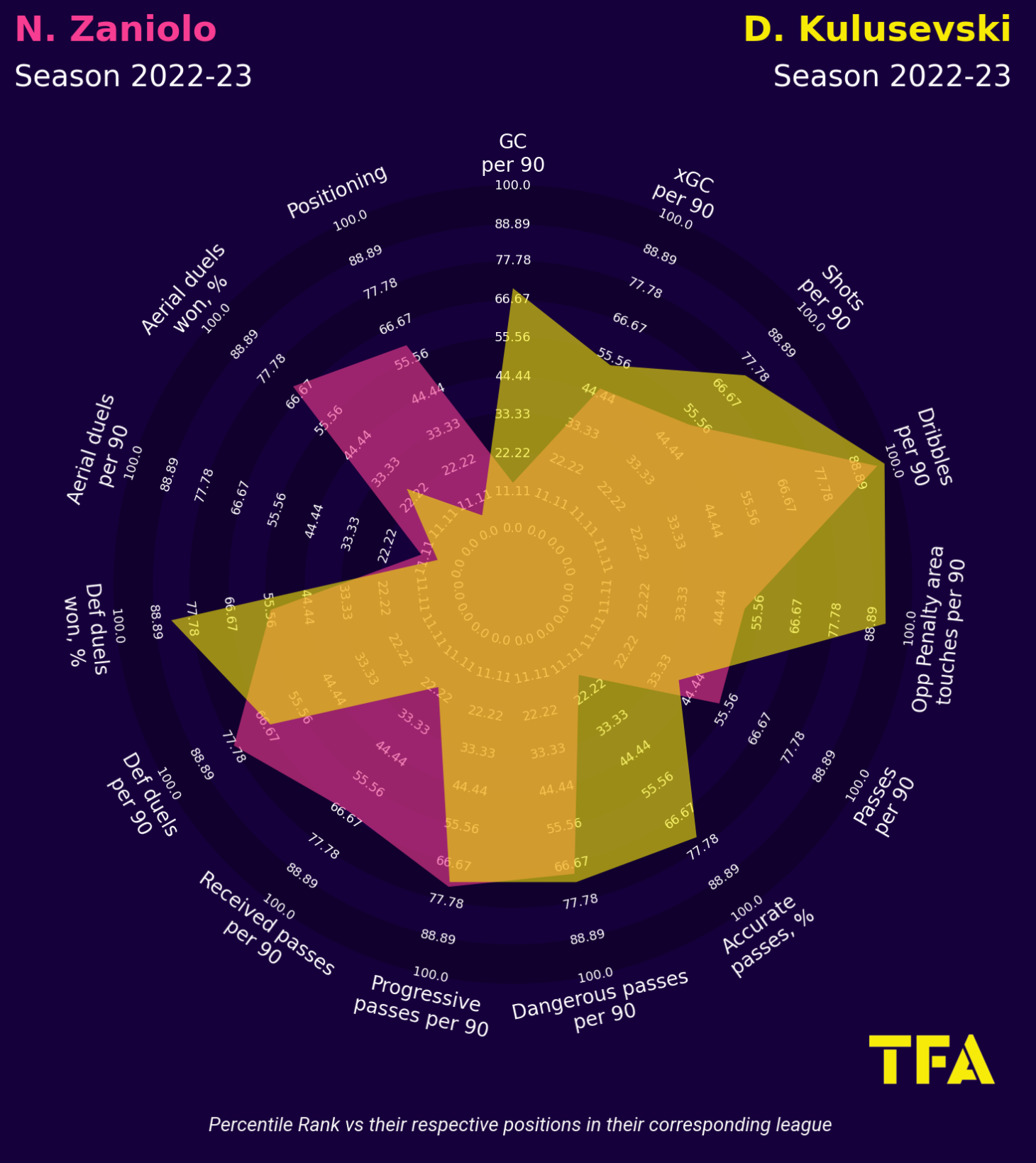 Dejan Kulusevski is likely to return to Juventus at the end of the season. Both players play on the right wing for their side. The above viz compares the stats of the player from the current season. Kulusevski is an important part of the Spurs’ setup. He has two goals and five assists in 13 league games for Tottenham Hotspur this season. He edges Zaniolo in the attacking and passing stats. Zaniolo contributes more on the defensive side. He will look to improve his attacking stats and get more on the scoresheet.

Nicolo Zaniolo’s signing is likely to have much of an impact on the 1×2 odds for Spurs as well as for the over/under lines. He is not a big goal-scoring threat, and therefore the odds are likely to get affected.

Tottenham Hotspur would like to add the talented Italian to their squad. He offers creativity on the right side and could improve a lot on the attacking side. They want to play Champions League football next season, and adding such players will add more depth to the squad. They will look to sign him in the current transfer window.

Under the microscope: How Eddie Nketiah has replaced the injured Gabriel Jesus in Arsenal’s title challenge