Leicester City signed RB Leipzig winger Ademola Lookman on a season-long loan. The 24-year-old previously played for English Premier League side Everton and joined the German club in 2019. He spent last season on loan at Fulham, and the Foxes were impressed with his displays on the pitch. Brendan Rodgers gave the youngster game-time in the league as well as in the European competition. Now, the manager wants to sign the forward player on a permanent deal. He is a versatile wide-forward who can play on both wings.

Lookman made 26 appearances for Leicester City in the English Premier League. The forward started in 16 matches and came on as a sub in the remaining ten. He also played a huge part in the Foxes’ run to the semi-finals of the UEFA Conference League. 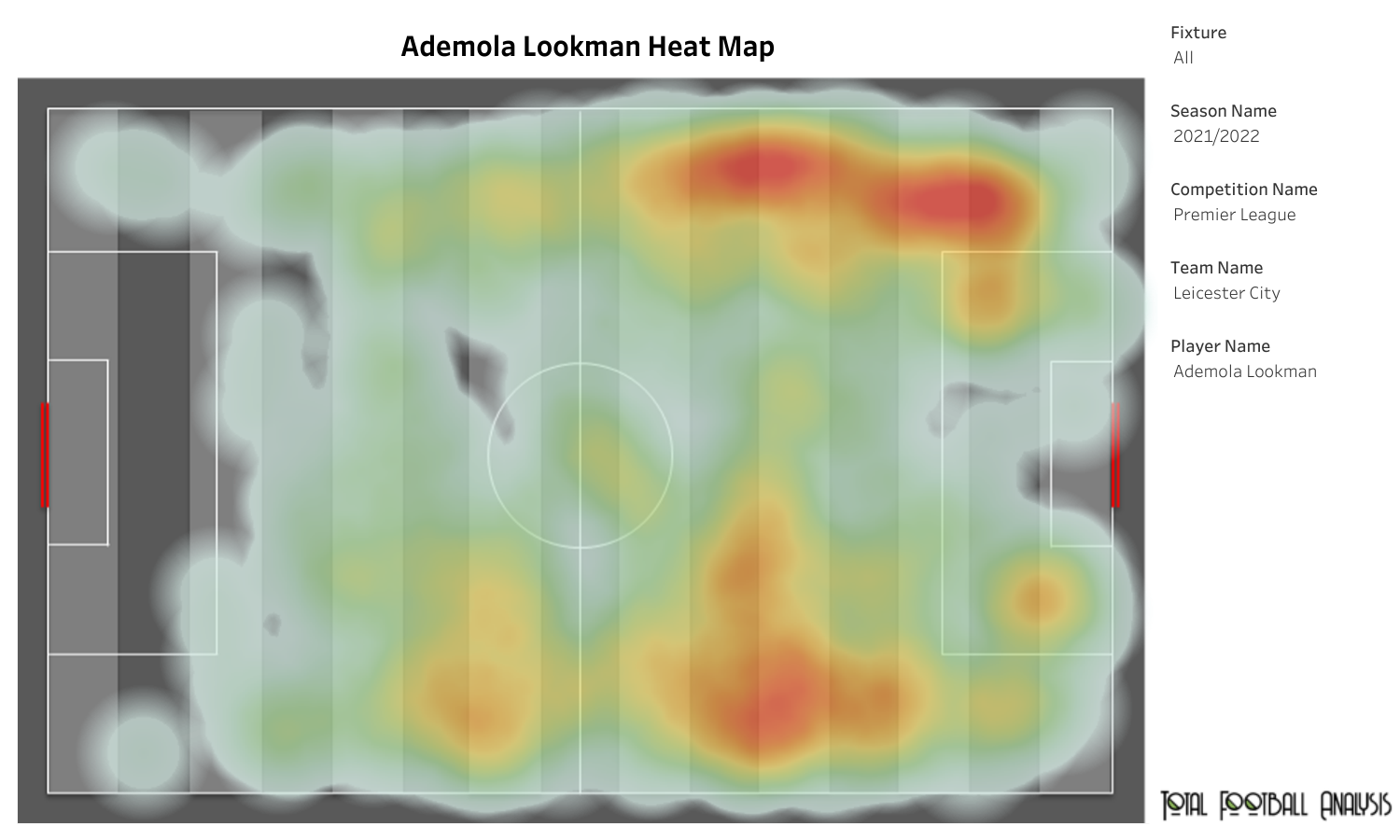 Lookman is a natural left-sided forward but can also play on the opposite side of the field. The above heat map shows that he has mostly featured on the left side, but the manager has also tried him as a right-winger. With Harvey Barnes in the squad, it makes it difficult for Brendan Rodgers to drop any one of these two players. To avoid that, he shifted Lookman to the opposite side, allowing Barnes to operate from his favoured left side. Lookman managed to score six goals in the league, and one of those goals was the winner against Liverpool at the King Power Stadium. 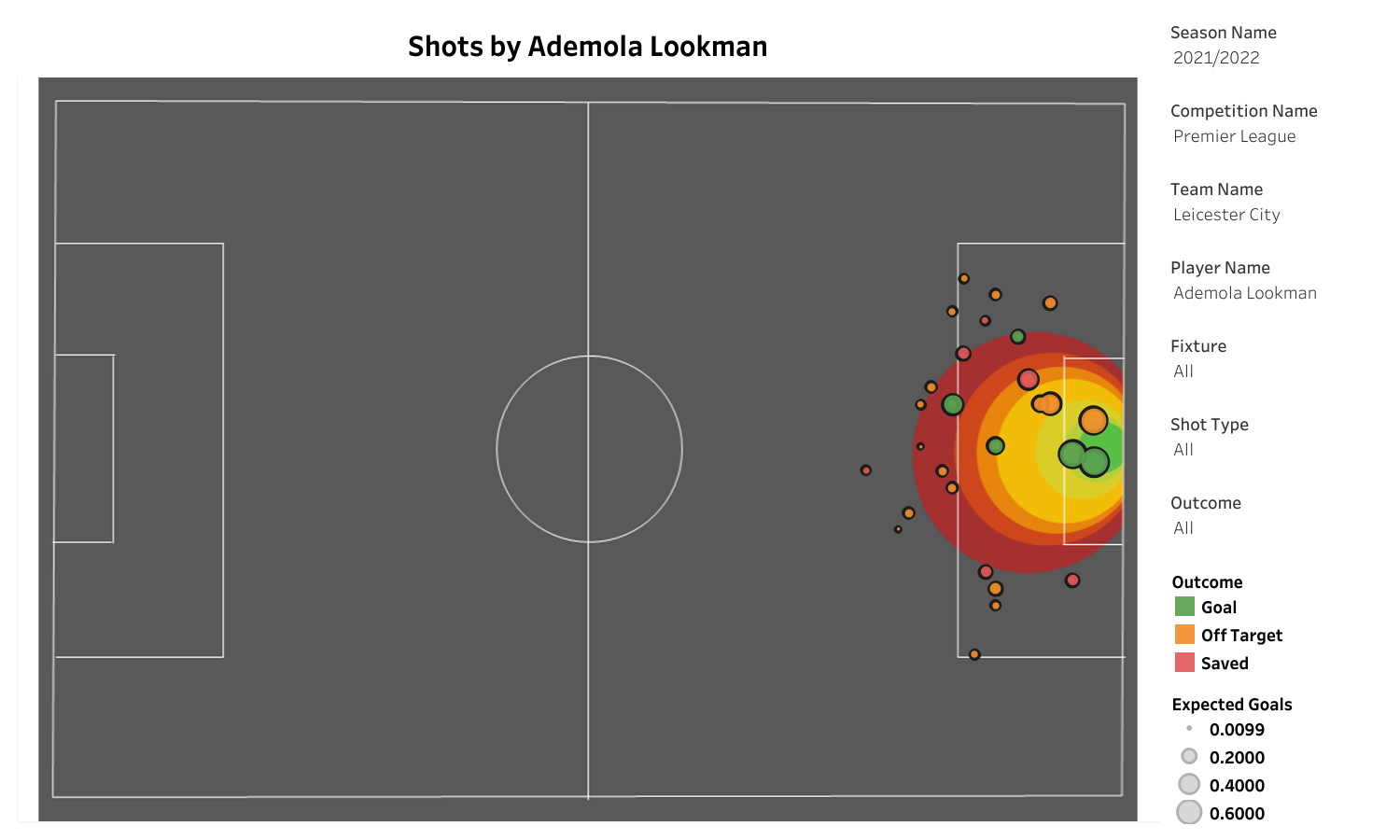 The forward was involved in 8.19 attacking actions per 90 minutes and had a success rate of 50%. He is a pacey winger who likes to stretch the opponent’s defence and beat them with his pace. The above viz shows the shot map of the player. He attempted 29 shots with a shot accuracy rate of 34.48%. From the above map, we can observe that Lookman scored all the goals from inside the opposition’s penalty box. He took some dangerous positions inside the penalty box and acted as a poacher. The 24-year-old managed to take positions inside the opposition’s 6-yard box and converted two opportunities.  The forward also attempted a few dribbles to get past the opposition’s defence. He averaged 4.32 dribbles per 90 minutes and had a 76% success rate. 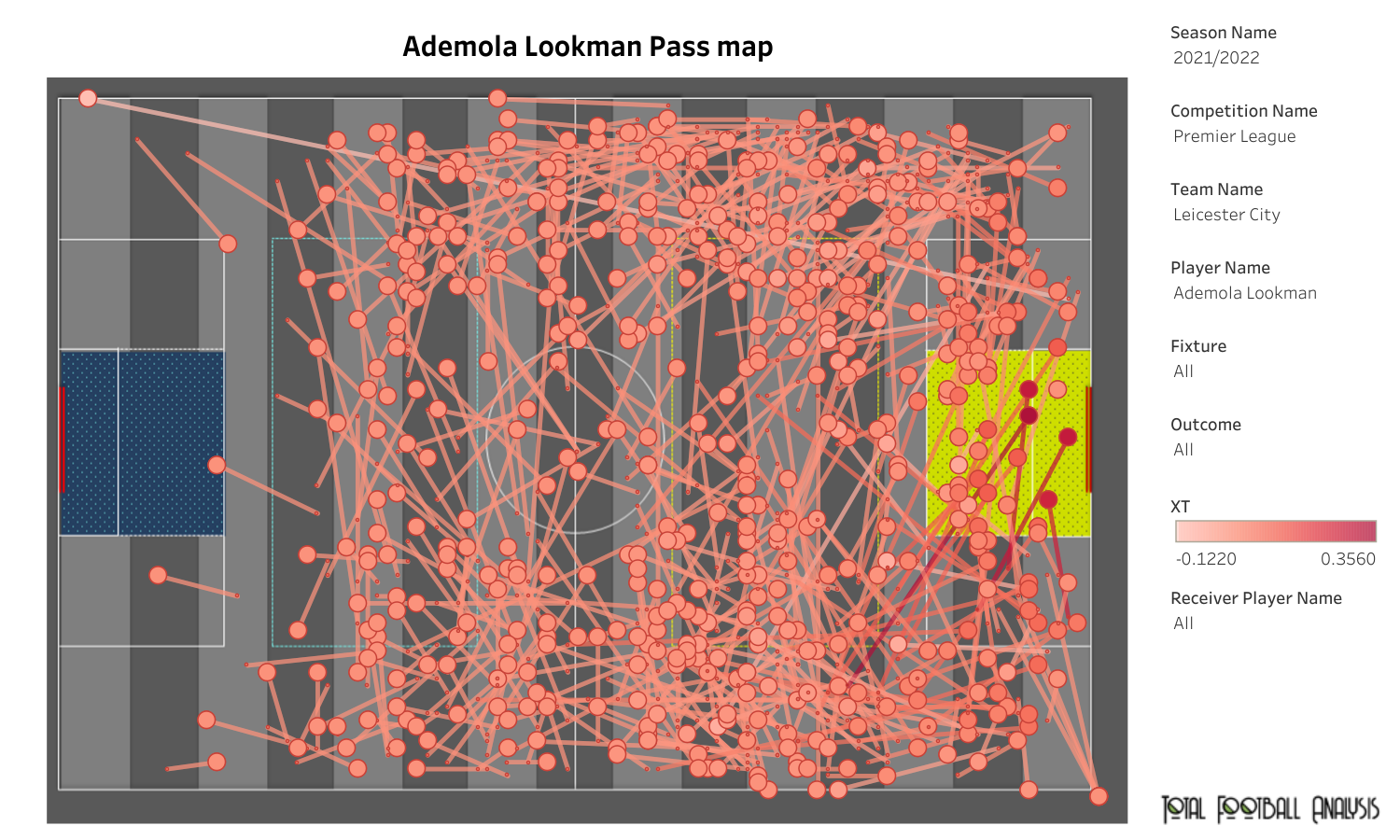 The above viz shows Lookman’s pass map. He averaged 29.4 passes per 90 minutes and had a success rate of 79.61%. He was unable to provide an assist but delivered some dangerous passes into the opposition’s penalty box. He was continuously supplying crosses and passes into the box. Most of his passes were directed towards Kiernan Dewsbury-Hall and Youri Tielemans.

Ademola Lookman is a threat on the wings with his pace and skills on the ball. Occasionally, he can score goals by beating the opposition defence with his pace and can also deliver dangerous passes into the opposition’s penalty box. Brendan Rodgers is looking to secure a move for the former Evertonian. The 24-year-old will also expect more game-time and try to contribute more towards scoring goals.

The post Under the microscope: Why Leicester City should sign Ademola Lookman on a permanent transfer appeared first on Football analysis, news, betting and opinion from Leicester City.