Arsenal are negotiating with Eddie Nketiah for a possible contract extension. Alexandre Lacazette has left the Gunners to join his former club Lyon, and that leaves the Gunners with only one striking option. Nketiah had limited opportunities at the start of the season, but Pierre Emrick-Aubameyang’s departure in the winter transfer window opened the doors for him. However, the manager didn’t show a lot of faith in him towards the start of the second half of the season, but Lacazette’s poor form gave Nketiah a chance in the playing XI. Nketiah impressed everyone by scoring goals in the limited opportunities that he had in the team. The 23-year-old’s performance showed why he deserves a new contract at the club.

Nketiah made 21 appearances in the English Premier League last season, and these included only eight starts. The player managed to score five goals and provided an assist. He only had limited time on the pitch but made full use of the opportunities that he got. 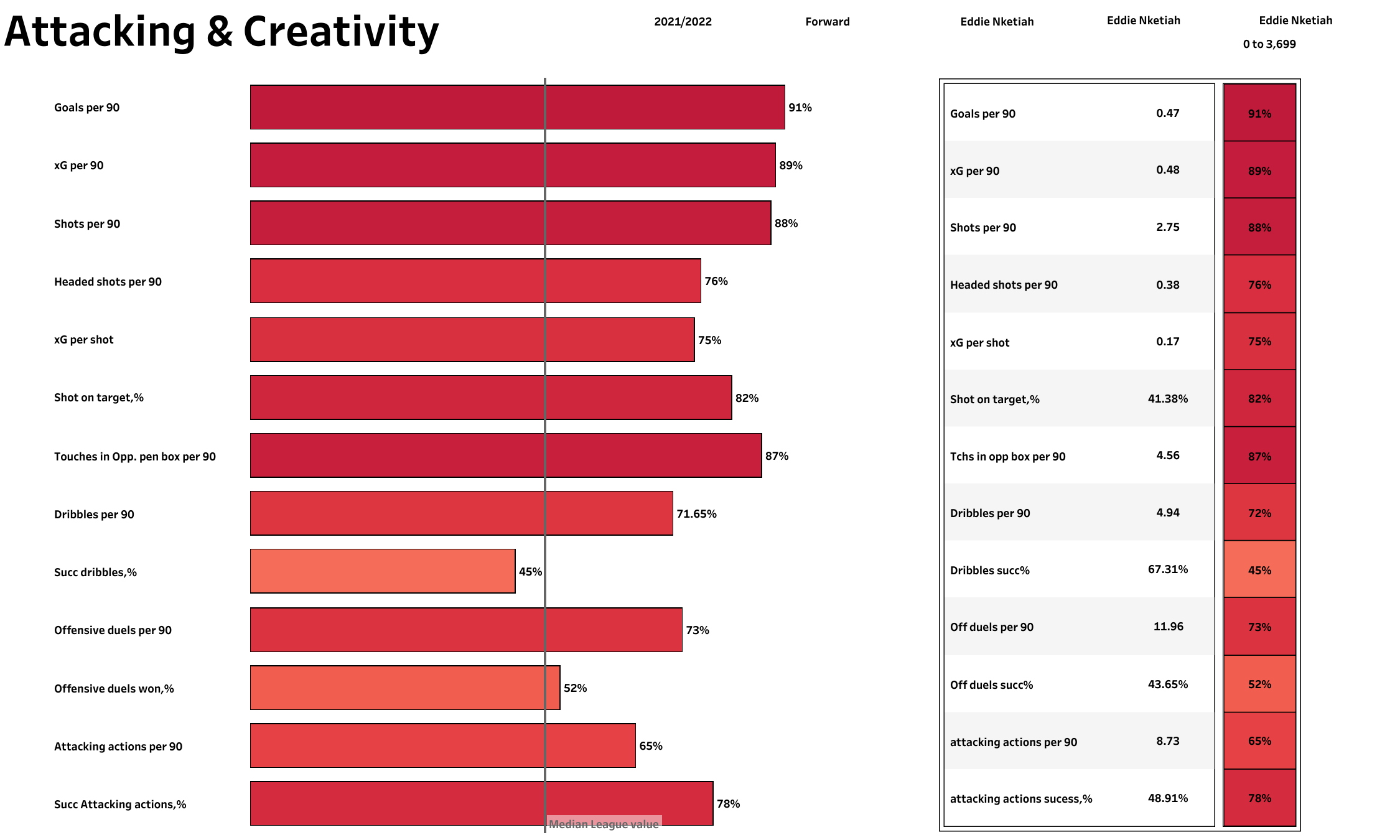 When looking at the above chart, the general rule is that the longer the bar the better the performance – you can see the league average in the middle, and the % is the percentile rank the player is in. The above viz shows the attacking stats of Nketiah in comparison to other strikers in the league. Nketiah had a high percentile rank as he spent fewer minutes than most of the regular strikers, but he had a lot of impact in whichever game he featured in. The striker averaged 2.75 shots per 90 minutes and had a high shot accuracy rate of 41.38%. He also took some dangerous positions inside the opposition’s penalty box and managed to take 4.56 touches per 90 minutes inside it. 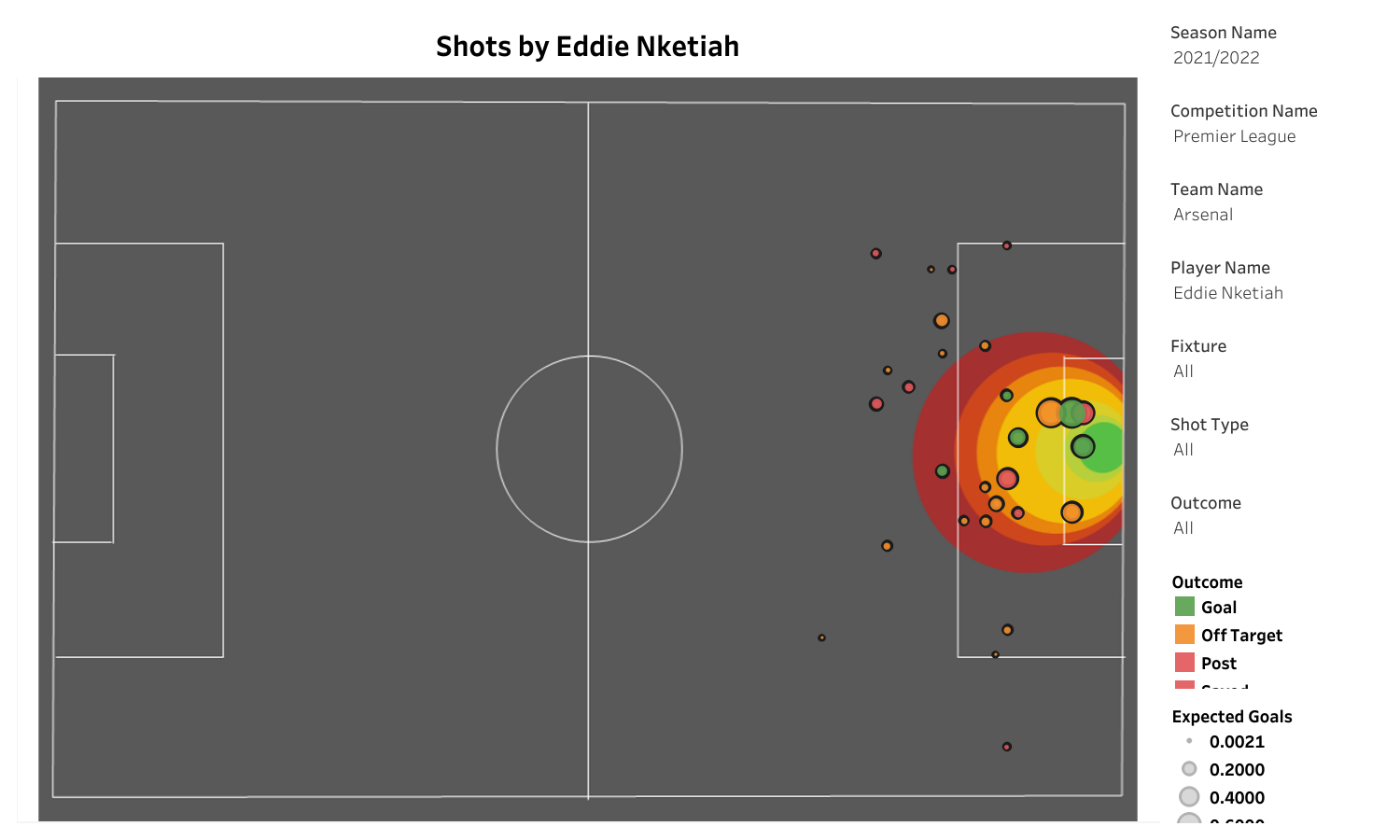 Nketiah attempted 29 shots and managed to hit the target 12 times. His overall xG rate was 5.06. The above shot map shows that the player scored four goals from inside the opposition’s penalty box, and one goal was scored from the edge of the box. He netted two goals against Chelsea and inspired his side to a 4-2 victory over the Blues. The player also took some dangerous positions inside the opposition’s 6-yard box and scored two goals. 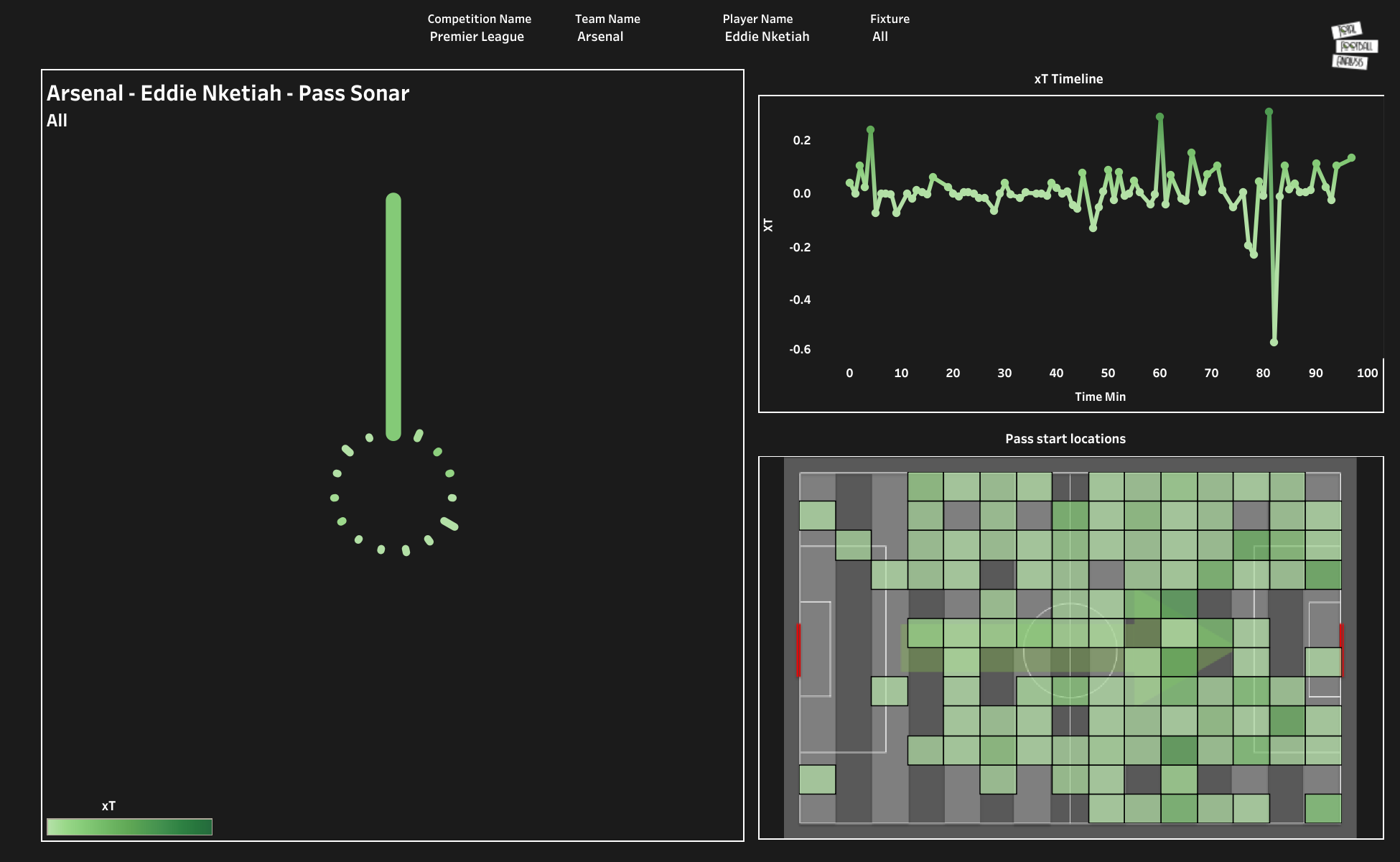 The above viz shows the pass start location as well as the threat created from passes at different time intervals. The striker was not that effective with the passing but provided an assist. He attempted a few passes from inside the opposition’s penalty box, but the passes were intercepted by the opposition defenders. Nketiah averaged 20.4 passes per 90 minutes and had an accuracy rate of 81.86%.

Eddie Nketiah scored all five goals in April and May. He only made three appearances in the first half of the season. The striker proved his worth by scoring goals against top teams and is now likely to stay at Arsenal in the future. He will be offered a contract, according to sources.

The post Under the microscope: Why does Eddie Nketiah deserve a contract extension at the Emirates? appeared first on Football analysis, news, betting and opinion from Arsenal.