Mikel Arteta’s side has started the season well and is leading the English Premier League table. The Spanish manager has a well-set squad and has a fixed set of players who start every match. However, there is still one position where the manager might have a selection dilemma. That position is the left-back role in the team. Arsenal had Kieran Tierney in their team before the start of the season. They signed Oleksandr Zinchenko from Manchester City to strengthen the squad. Tierney has been prone to injury since joining Arsenal, and the manager wasn’t going to take a risk this time around.

When Oleksandr Zinchenko joined the club, there was a chance Kierney would lose his place as the club’s left-back. Zinchenko is one of the best passers of the ball in the league, while Tierney is one of the best-attacking full-backs. Both these players have different styles of gameplay. We now look at some of their stats that show who will be the first choice left-back for Mikel Arteta.

Oleksandr Zinchenko started as the left-back in the opening fixtures of the season. The Ukrainian international started the first three matches and was injured for the next two fixtures. He made a comeback against Manchester United. Due to injuries to Zinchenko and Tierney, he got a lot of minutes on the pitch. Both these players have spent an equal number of minutes on the pitch this season. The total actions performed by these players also average similar. They have made 76.6 actions per 90 minutes and Zinchenko has a high success rate of 78.7%, while Tierney is behind him with a 68.9% success rate. 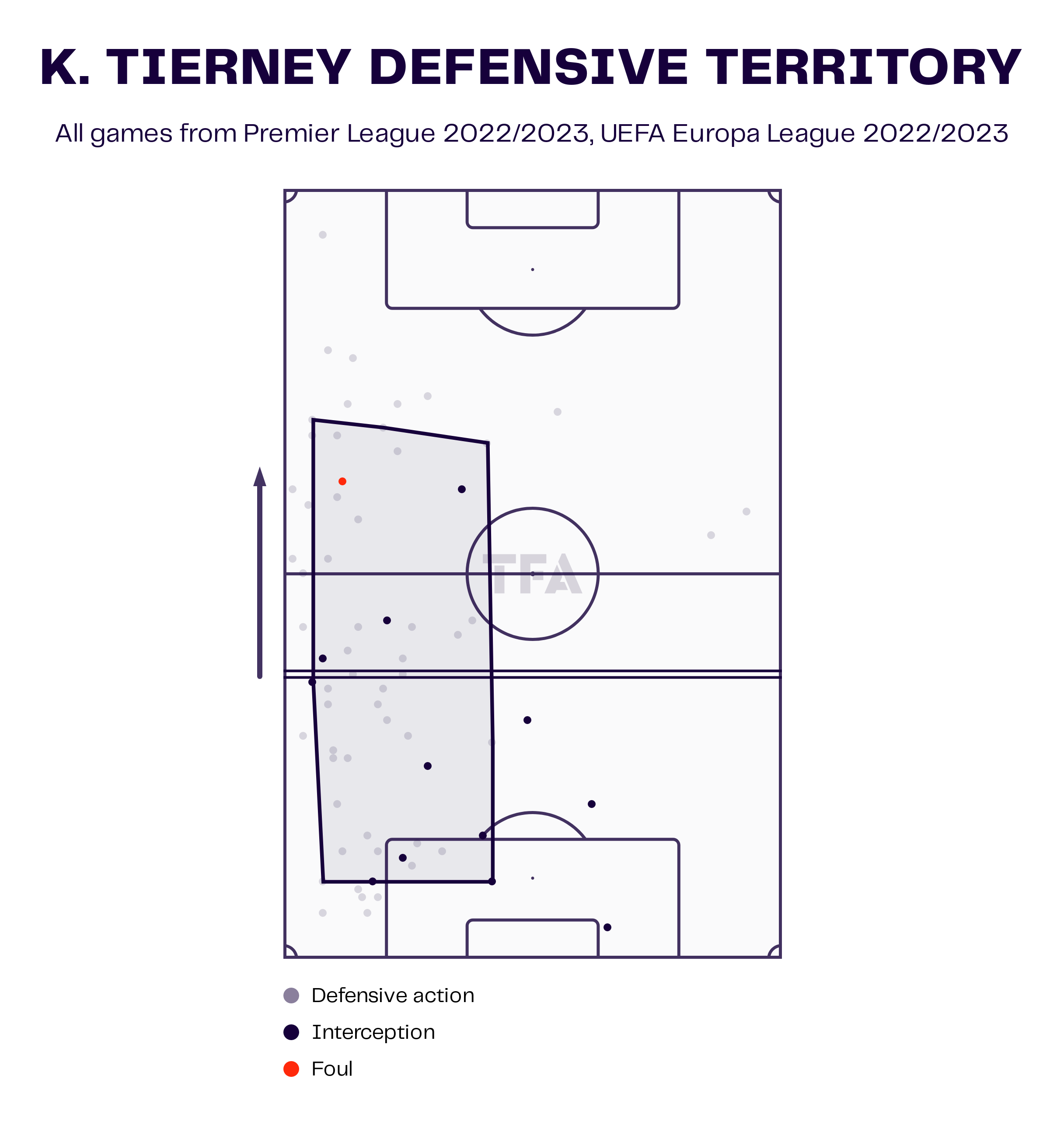 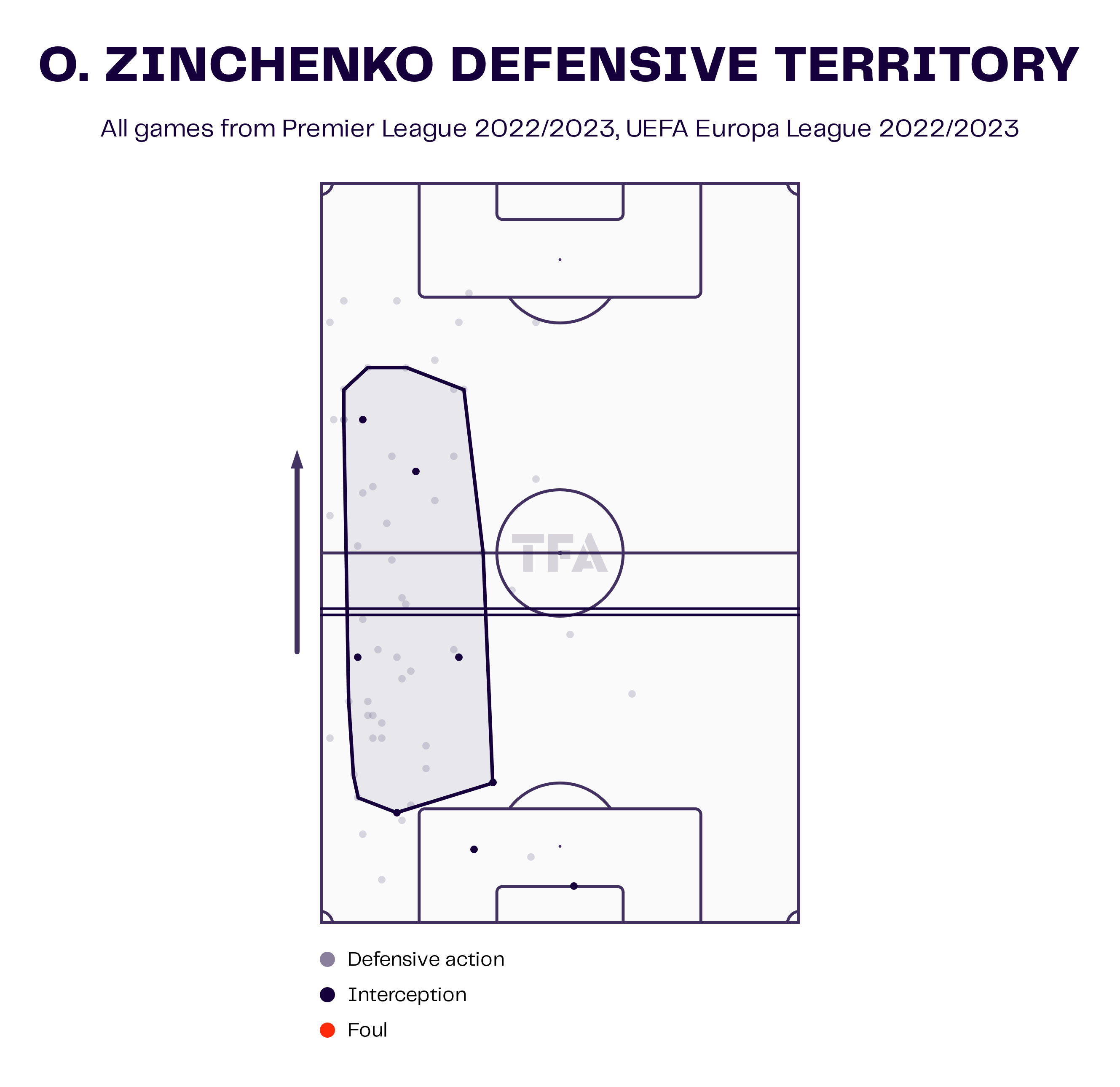 The above viz shows the defensive territory of the player. Zinchenko likes to stay in the middle third, while Tierney likes to make a lot of forward runs. Kieran Tierney has contested 15.6 duels per 90 minutes and won 50.8%. Zinchenko, on the other hand, has contested 14.34 duels and won 60.3%. Tierney has intercepted the ball 27 times, and Zinchenko has made only 12 interceptions. Because of his high duels win percentage, the Ukrainian is more defensively sound. 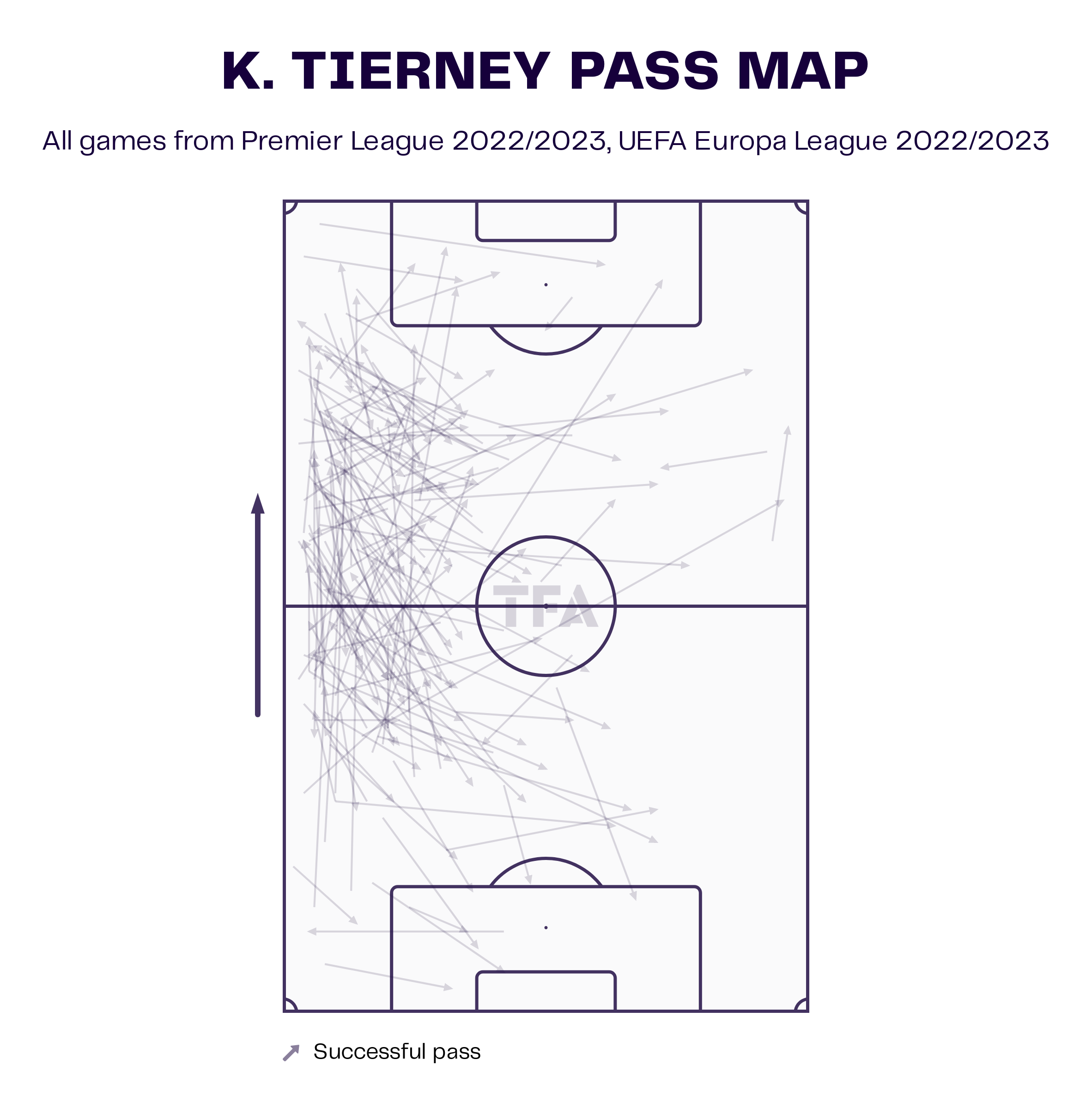 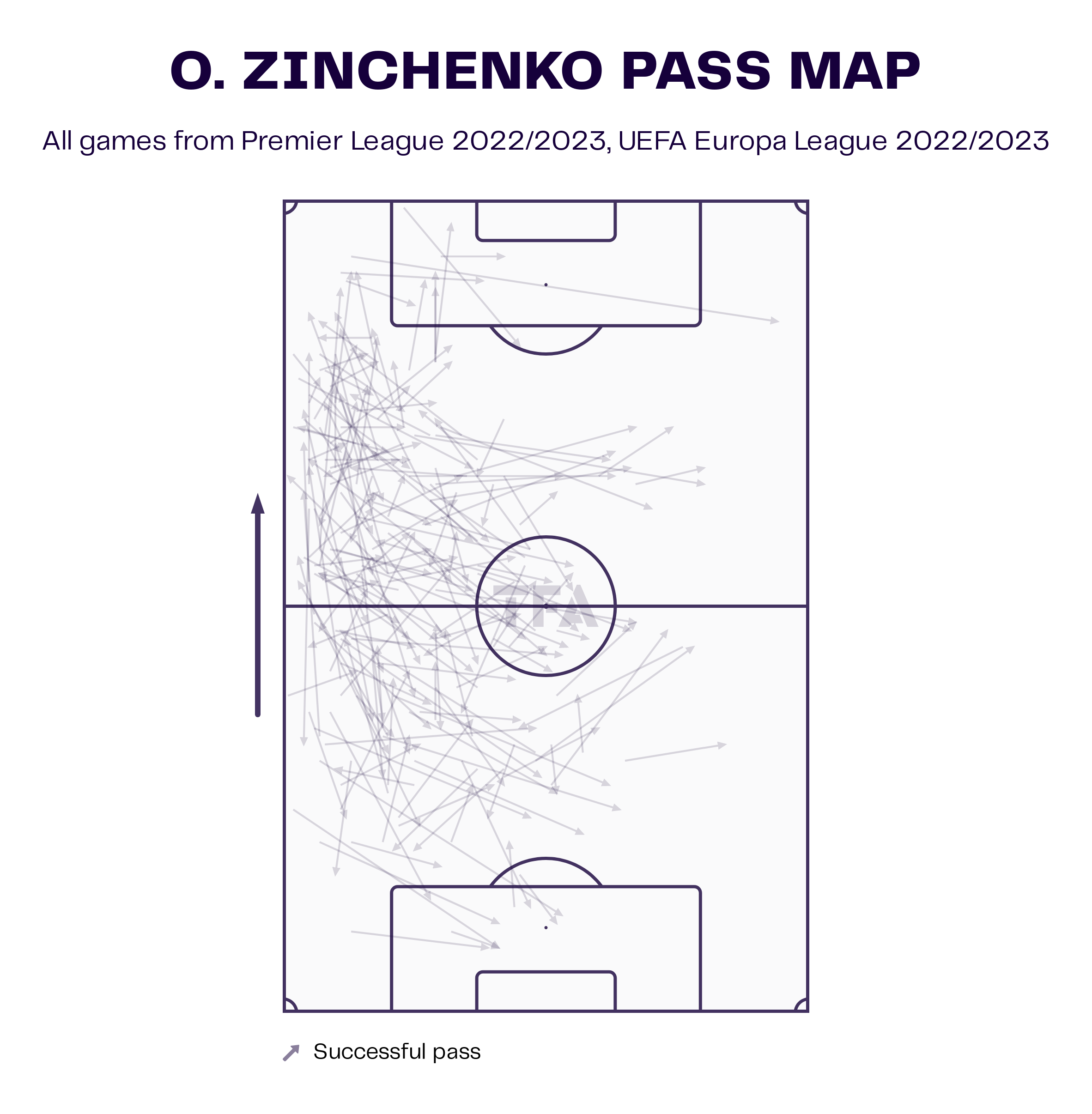 Oleksandr Zinchenko likes to keep the ball and chooses the safe options most of the time. He averages 56.13 passes per 90 minutes and has a high accuracy rate of 89%. Kieran Tierney averaged 52.07 passes and had an accuracy rate of 81.9%. Tierney has attempted more passes to the final third and the penalty box than Zinchenko this season. However, he has yet to provide an assist and is one assist behind his teammate this season. 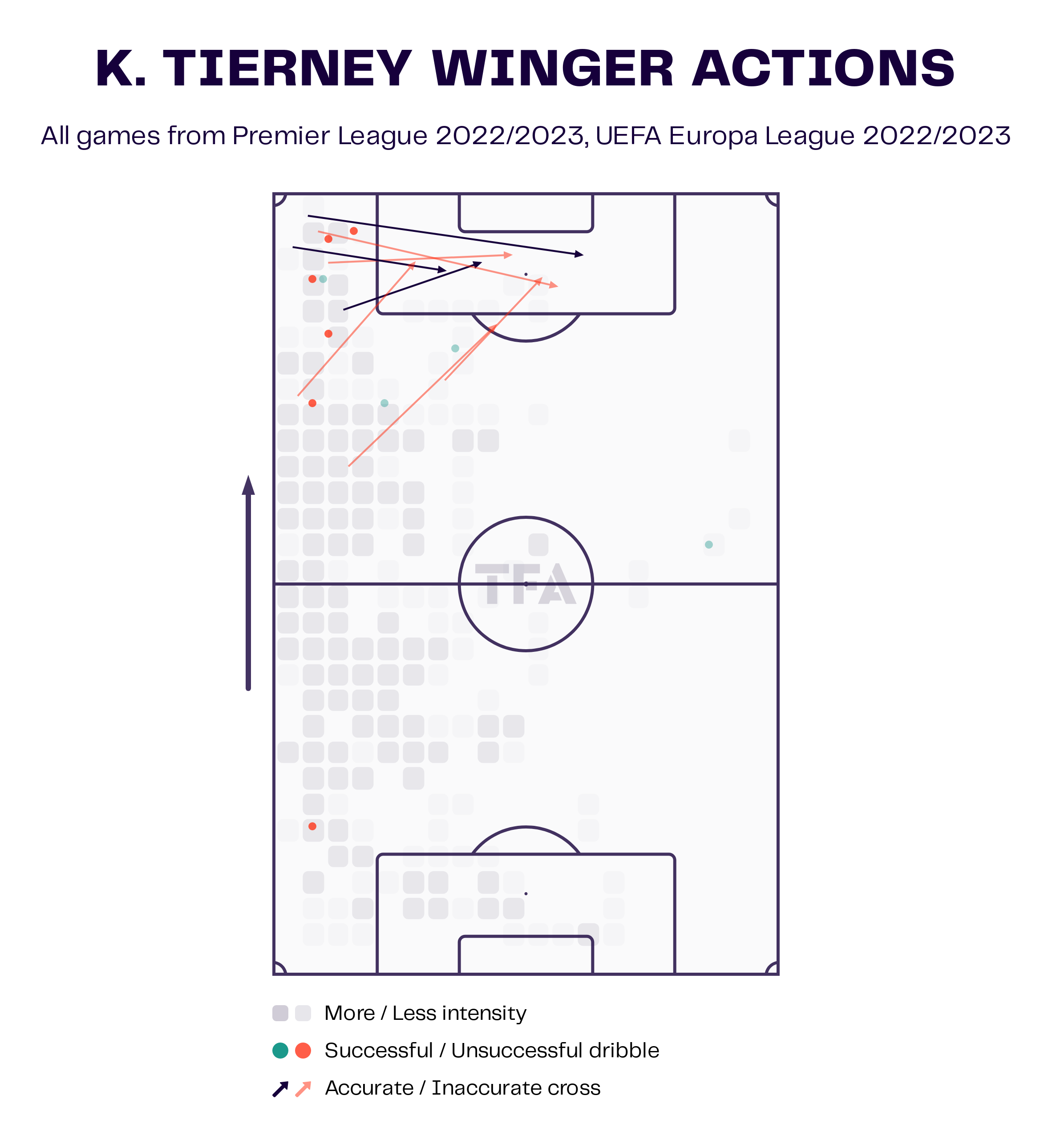 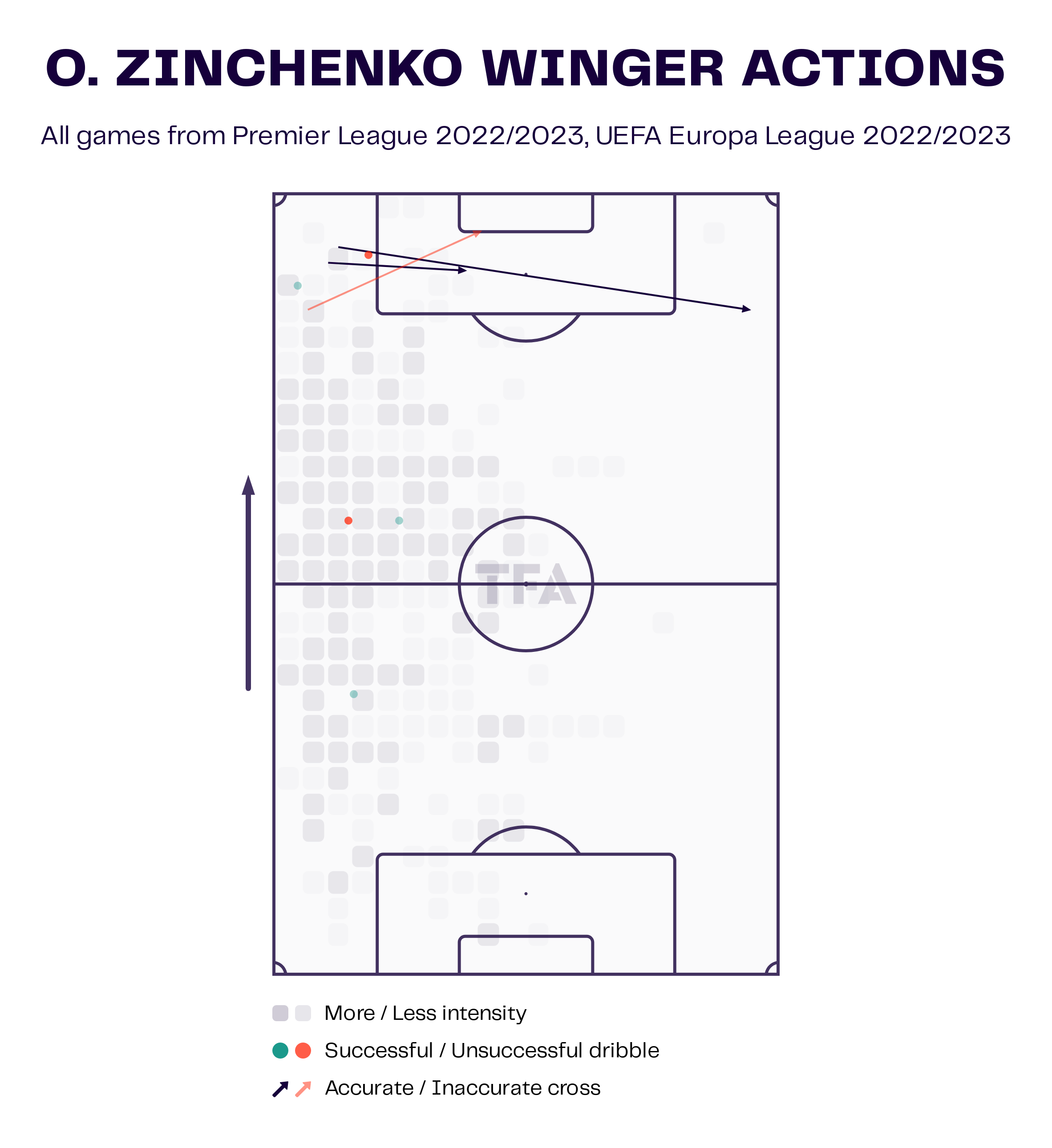 Kieran Tierney has taken more attacking positions and has been involved in a few attacking plays this season. The defender likes to stretch the defence and provides a cross or two in the match. Oleksandr Zinchenko likes to stay behind and maintain his position. He is always available to receive the ball and eases the pressure on his teammates.

Both of these full-backs have a different type of nature from each other. Oleksandr Zinchenko is more like a midfield player who likes to keep the ball and pass it to teammates. While Tierney is an attacking full-back and likes to make forward runs, Arsenal’s first choice is likely to remain as Zinchenko has the experience of winning titles and will prove to be handy in Arsenal’s search for silverware this season.

The post Under the microscope: Who should be Arsenal’s first-choice left-back? appeared first on Football analysis, news, betting and opinion from Arsenal.