Tanguy Ndombele may not have had a good season at Tottenham Hotspur last time as he regularly failed to cement himself in the starting XI and was sent out on loan to Olympique Lyonnais in the January transfer window. The signing of Yves Bissouma may have pushed him down the pecking order, but he can still be a valuable backup to the trio of Rodrigo Bentancur, Pierre-Emile Højbjerg and Bissouma. With Harry Winks most likely to leave the Tottenham Hotspur stadium this summer, Spurs will need backup at the centre of the park, and it could be in the form of Ndombele. 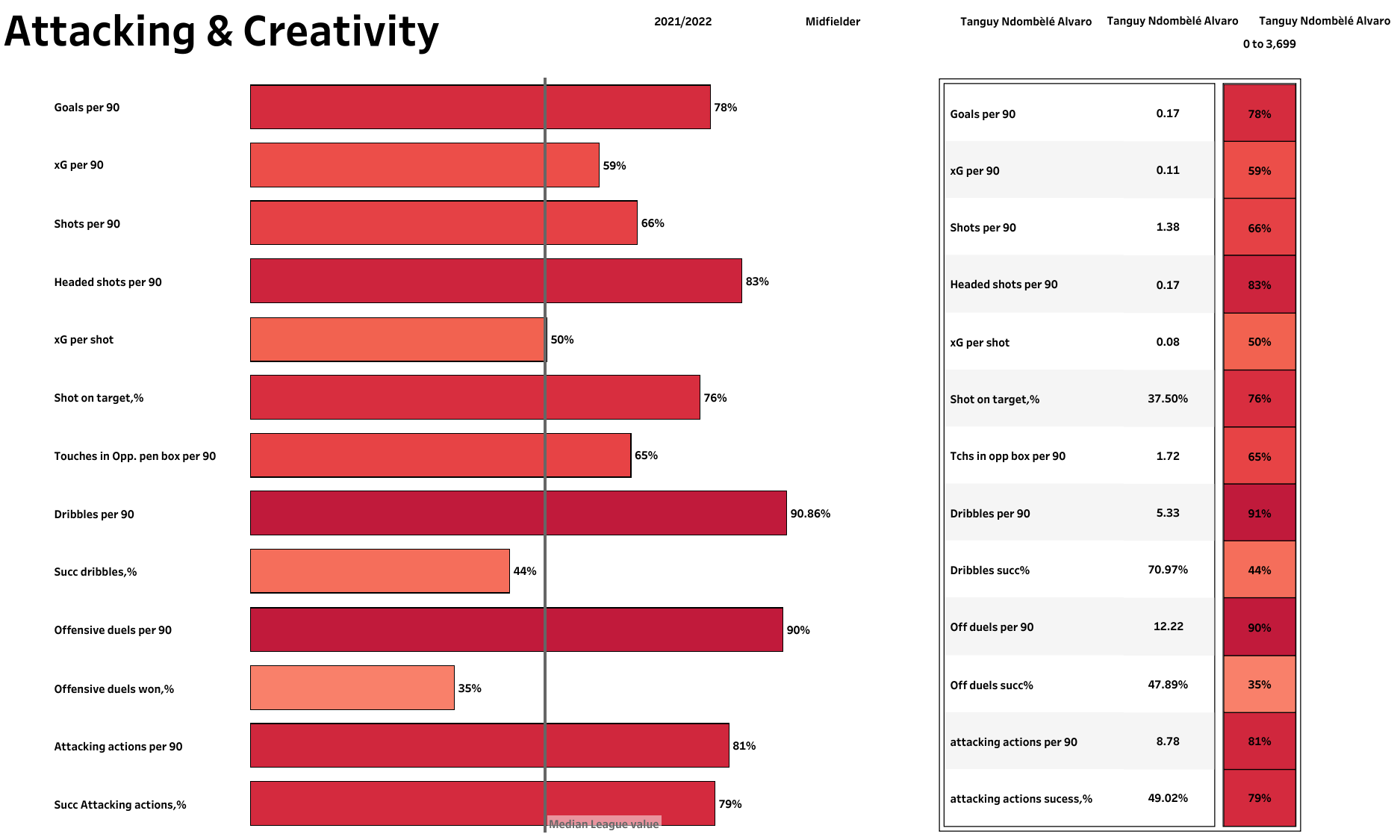 Ndombele made nine appearances for Tottenham Hotspur in the Premier League last season before going out on loan to Olympique Lyonnais. Six of these were starts, and he played for 484 minutes. He scored once and assisted one goal, meaning he was involved in a goal every 242 minutes. He took 1.38 shots per 90 and hit 37.5% of them on target. The Frenchman ranked in the top 10% for dribbles attempted per 90 among midfielders, with 5.33 to his name. He had a 71% dribble success rate. He contested in more than 12 offensive duels per 90, though his success rate of just under 48% ranked him in the bottom 35% of midfielders. 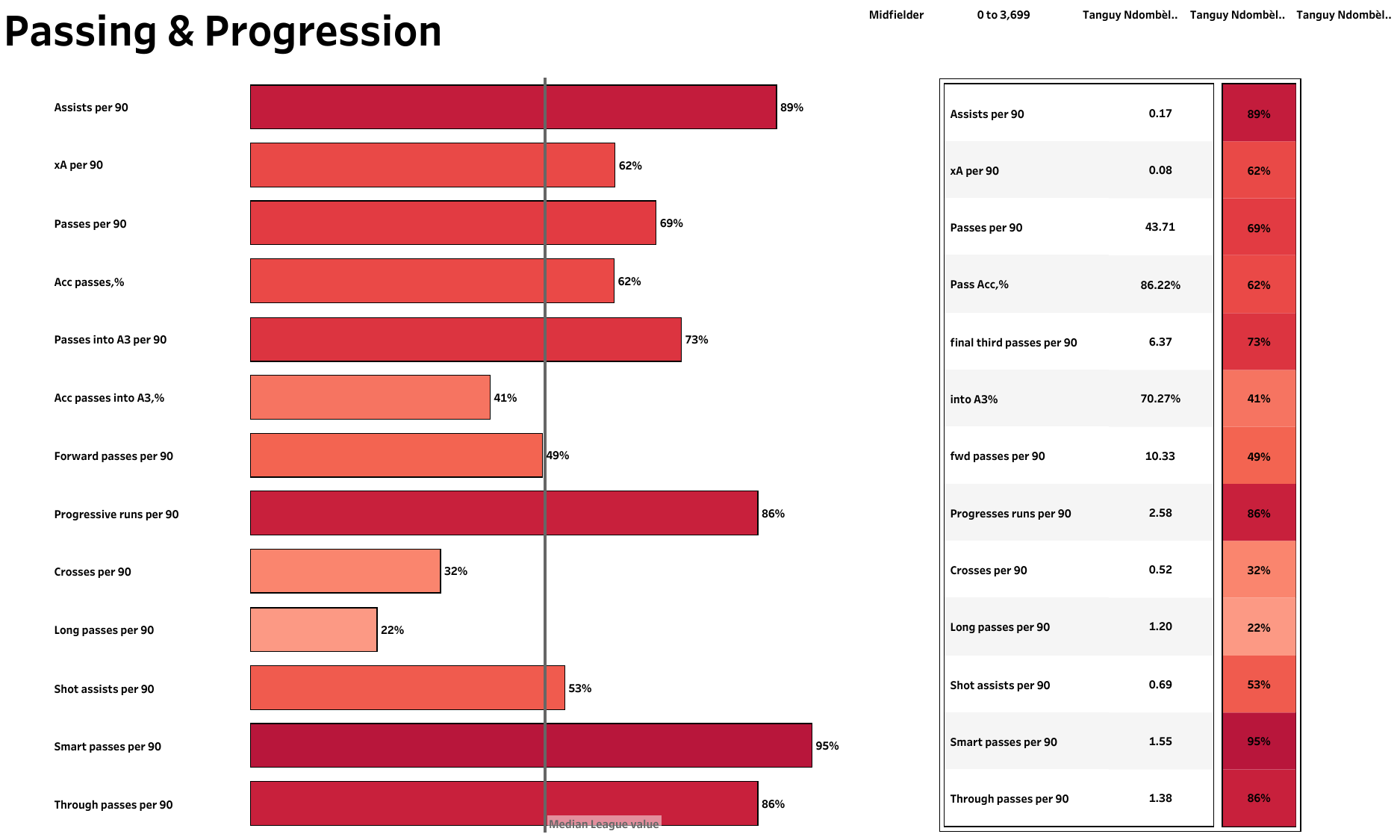 Ndombele may have provided one assist, but it was more than double what xA estimated, at least in terms of per 90 value. He attempted close to 44 passes per 90 and had a pass accuracy of 86.2 %. As far as ball progression was concerned, he completed 70% of his balls into the final third out of 6.37 attempts per 90. The Frenchman’s 2.58 progressive runs per 90 put him in the top 14% of midfielders. With 1.55 smart passes per 90 and 1.38 through passes per 90, he ranked in the 95th and 86th percentiles, respectively, for these categories. 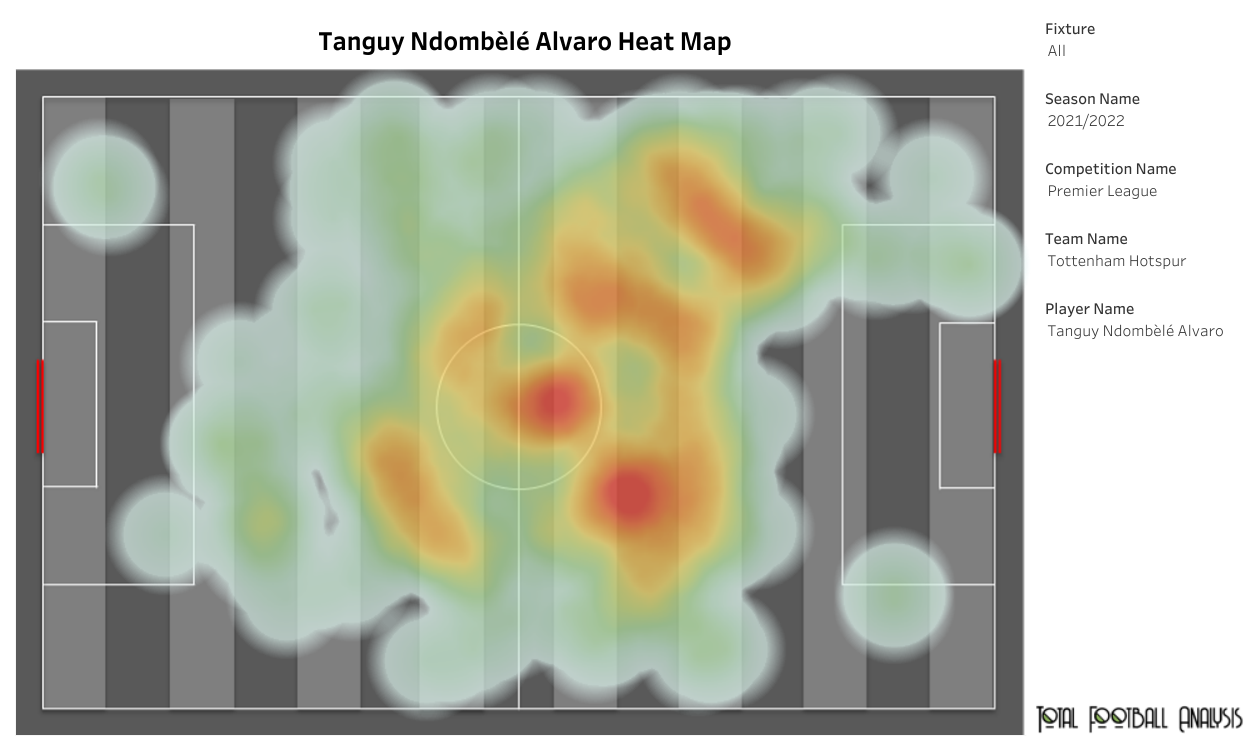 Ndombele was busiest in the midfield areas, as one would expect. He made advancing runs whenever possible, and he occasionally neglected his defensive duties. With the ball at his feet, he completed 3.7 progressive passes per 90, 4.26 passes into the final third per 90, 9.63 progressive carries per 90, 2.78 carries into the attacking third per 90 and 1.3 carries into the penalty area per 90. Defensively, he attempted 16.3 pressures per 90, only 2.96 tackles & interceptions per 90 and less than a block and a clearance each per 90.

On the face of it, Tanguy Ndombele had a pretty respectable season on the attacking end. However, the same cannot be said for his defensive abilities. Hence, if the former Olympique Lyonnais midfielder is to play at Tottenham Hotspur this season, it will most likely be substitute appearances off the bench. This way, Ndombele could be a useful backup this campaign.

The post Under the microscope: Tanguy Ndombele – Despite exit rumours, might be a useful backup at Tottenham appeared first on Football analysis, news, betting and opinion from Spurs.