Raheem Sterling arrived from Liverpool to Manchester City in the summer of 2015. One season later, it looked like one of the worst transfers of 2015-16. However, the arrival of Pep Guardiola in the summer of 2016 revived Sterling’s career and made him an important player at the Etihad Stadium for years. However, the increase in Manchester City’s depth meant that Raheem Sterling was no longer a guaranteed starter for Guardiola’s team. It might remain the same with Erling Haaland’s arrival this summer. The Norwegian superstar’s arrival means Sterling has been linked with a move away from the club, particularly to Chelsea. 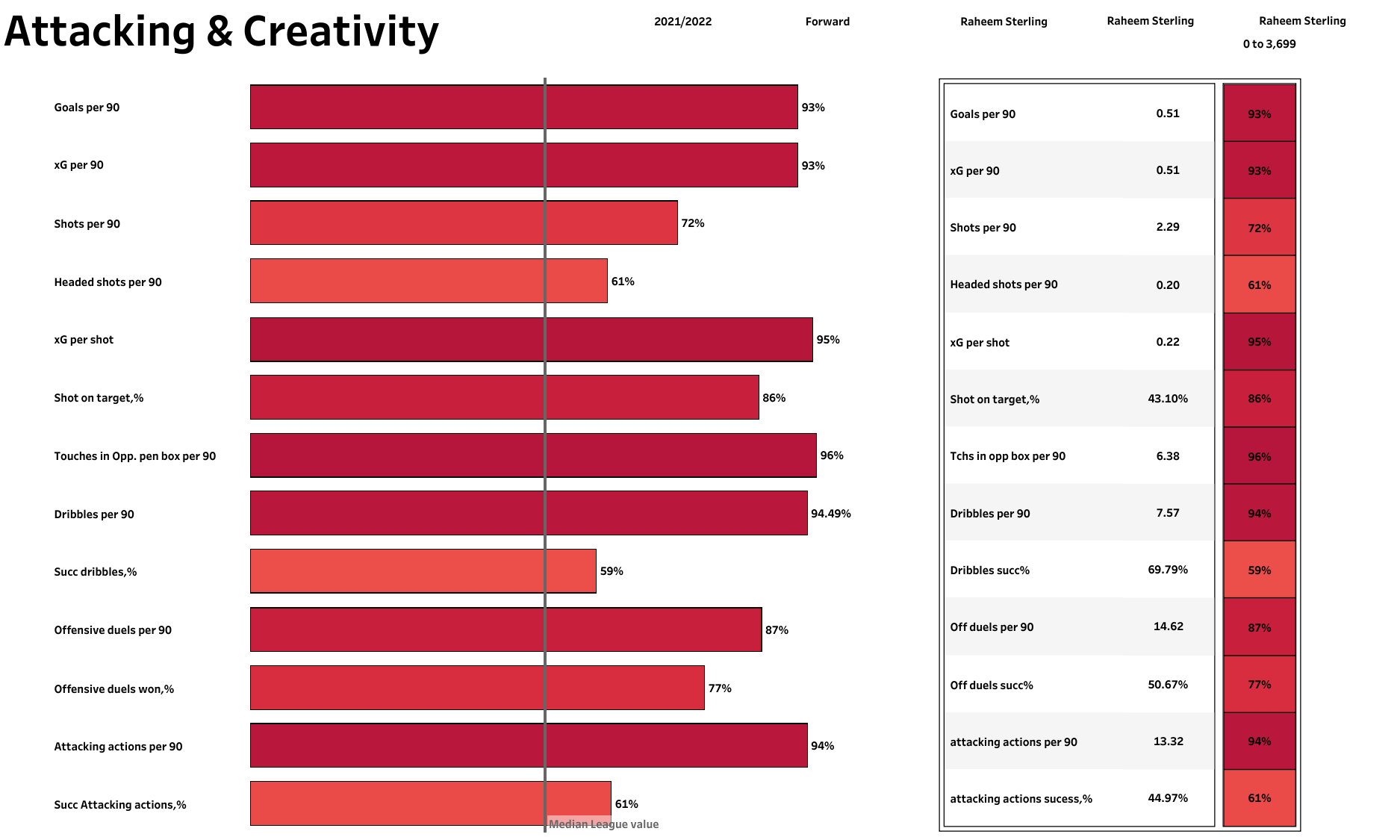 Sterling featured in 30 matches for Manchester City in the recently concluded 2021-22 Premier League season, where he played for 2,128 minutes. This ranked him ninth in the City squad. During his time on the pitch, he scored 13 goals at a rate of 0.51 per 90 which is the same as what xG predicted. The Englishman generated an xG per shot of 0.22, which ranked him in the top 5% for forwards, and he also hit 43.1% of his shot attempts on target. He recorded more than six touches in the opposition’s penalty area per 90 and completed nearly 70% of his take-ons. 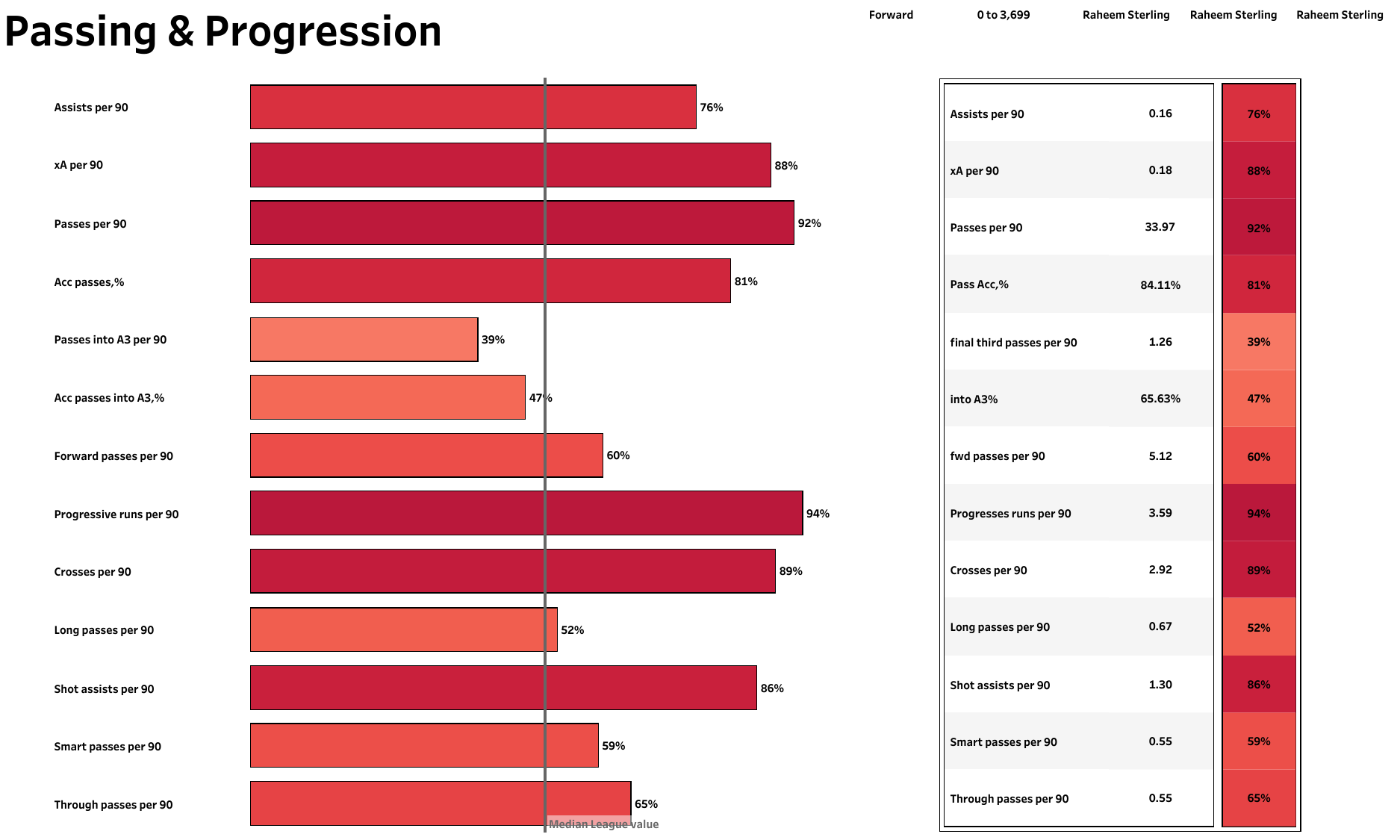 In addition to his 13 goals, Sterling provided five assists, meaning he was involved in a goal every 118 minutes. His xA per 90 of 0.18 put him in the top 12%. He was no passenger in the City build-up play, averaging just below 34 attempted passes per 9,0 which was in the 92nd percentile for forwards, and 84.11% of his passes found a teammate. The Kingston-born attacker made over 3.5 progressive runs per 90, which ranked him in the top 6%. Additionally, he delivered just under three crosses per 90, putting him in the 89th percentile. 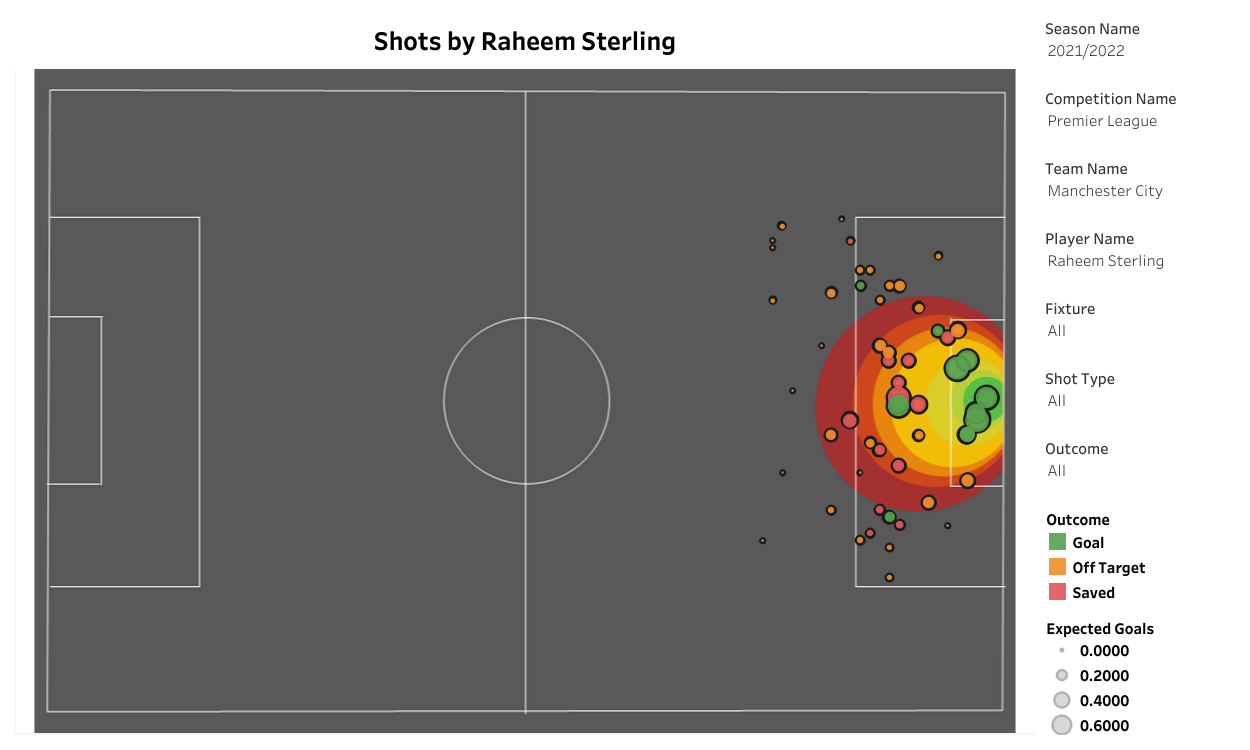 As seen from the above shot map, all of Sterling’s goals for City came from inside the box. Two of his strikes were from the penalty spot. He capitalised on a lot of big chances, especially from inside the six-yard box. Most of his shot attempts came from inside the box, and his average shot distance from goal was 13.8 yards. Overall, Sterling took 54 shots and hit 25 of them on target, which means that his shot conversion rate stood at 4.15 shots per goal scored. 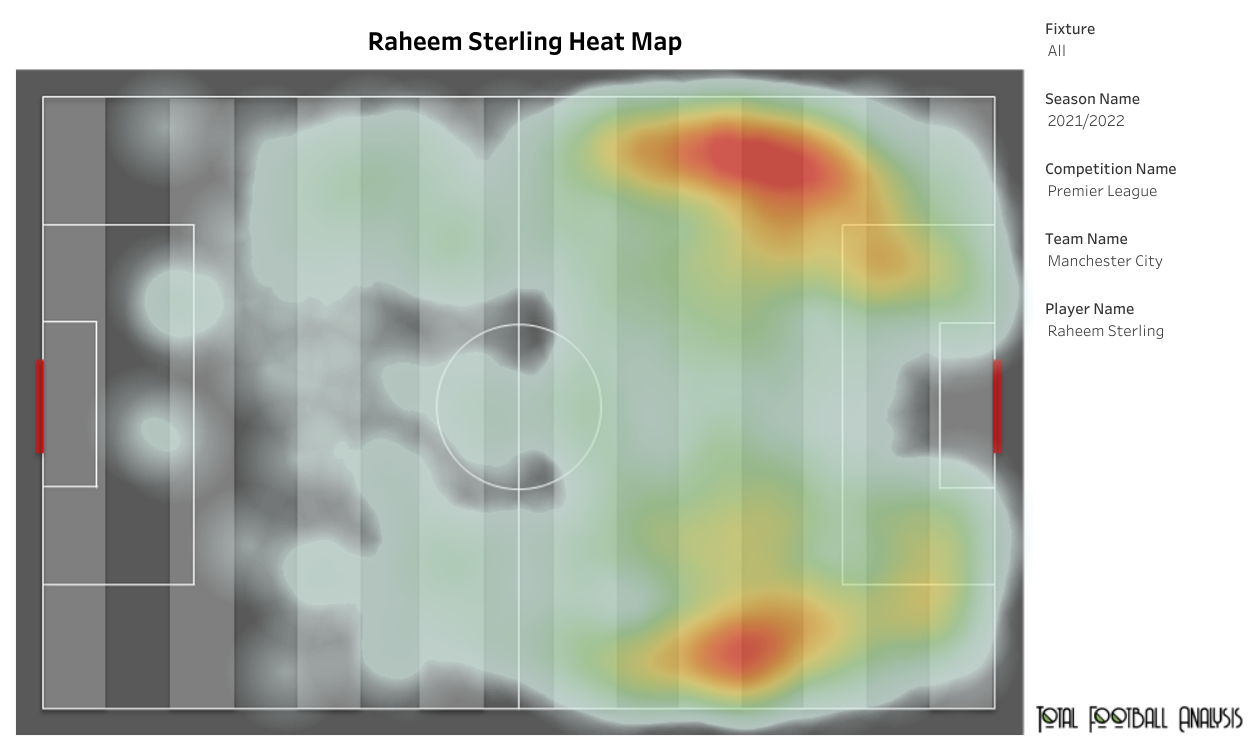 Sterling showed his versatility for City by playing on both the flanks and being just as good on the right flank despite being a natural left-winger. He frequently positioned himself in advanced areas, receiving 9.92 progressive passes per 90. With the ball at his feet, the winger completed 3.18 progressive passes per 90, 2.33 passes into the penalty box per 90, 7.97 progressive carries per 90 and 2.2 carries into the box per 90.

Raheem Sterling has performed well for Manchester City whenever he was on the pitch. But the arrival of Haaland from Borussia Dortmund is sure to reduce his game-time at the Etihad if he stays. Sterling will want to play more, either at Manchester City or elsewhere, especially with the World Cup approaching in November.

The post Under the microscope: Should Manchester City keep hold of Raheem Sterling? appeared first on Football analysis, news, betting and opinion from Man City.