When Rodrigo Hernández Cascante signed for Manchester City from Atletico Madrid in the summer of 2019, the team expected him to be the long-term successor to Fernandinho. Three seasons later, he has done exactly that. According to Transfermarkt, the Spaniard’s market value has risen from €2.5 million in June 2017 to €80 million five years later. Despite the arrival of Kalvin Phillips from Leeds United, he is expected to be the undisputed first choice at his position. As per reports, the Cityzens are ready to offer a contract extension to the defensive midfielder. 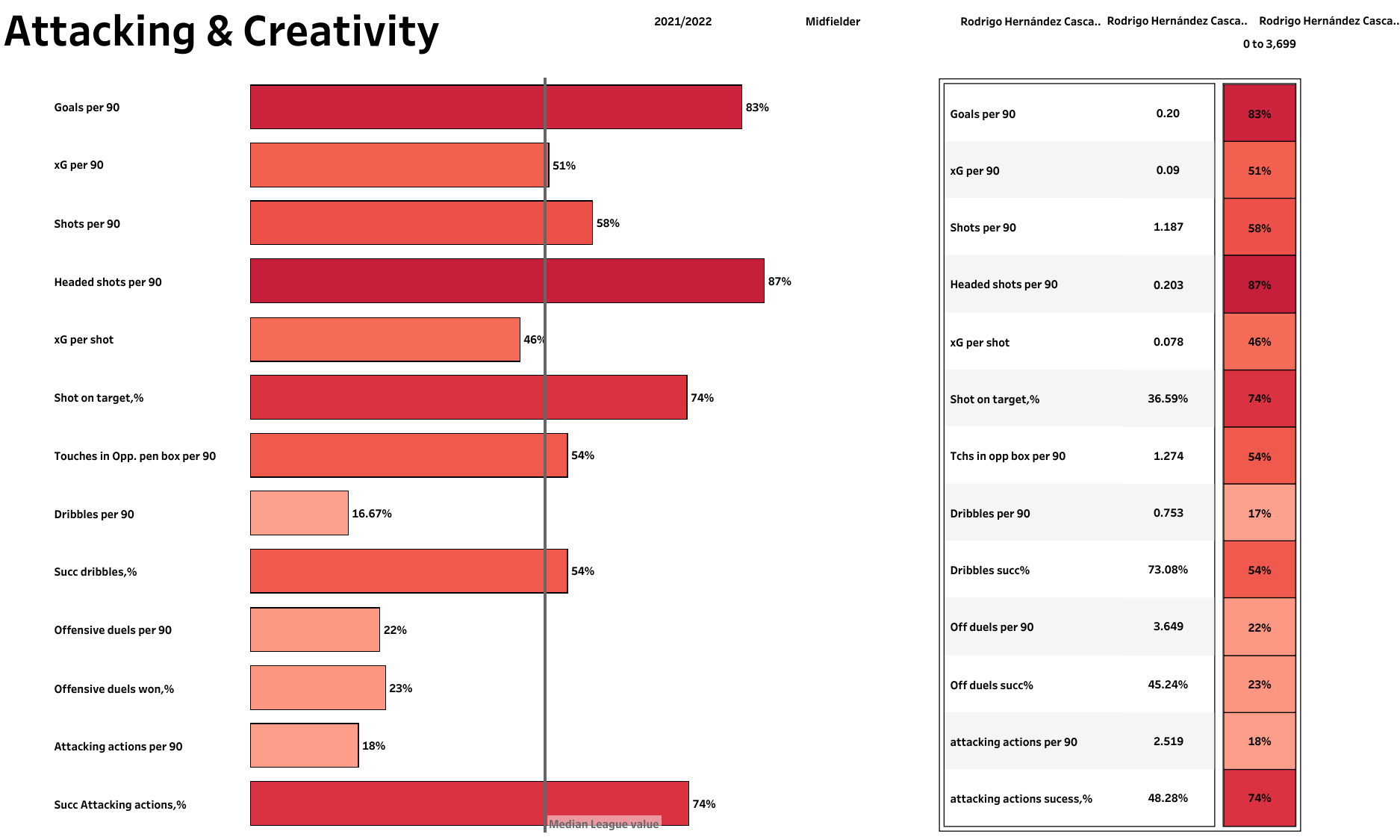 Rodri featured in 46 games across all competitions last season, 33 of which came in the Premier League. He played for 2,888 minutes, during which he managed to score an astonishing seven goals from defensive midfield at the rate of 0.2 per 90. As a result, he vastly overperformed on his xG per 90 of 0.09. With 0.2 headed shots per 90, the midfielder ranked in the top 13% of this category. He was also placed just outside the upper quartile for percentage of shots on target, with 36.59% to his name. 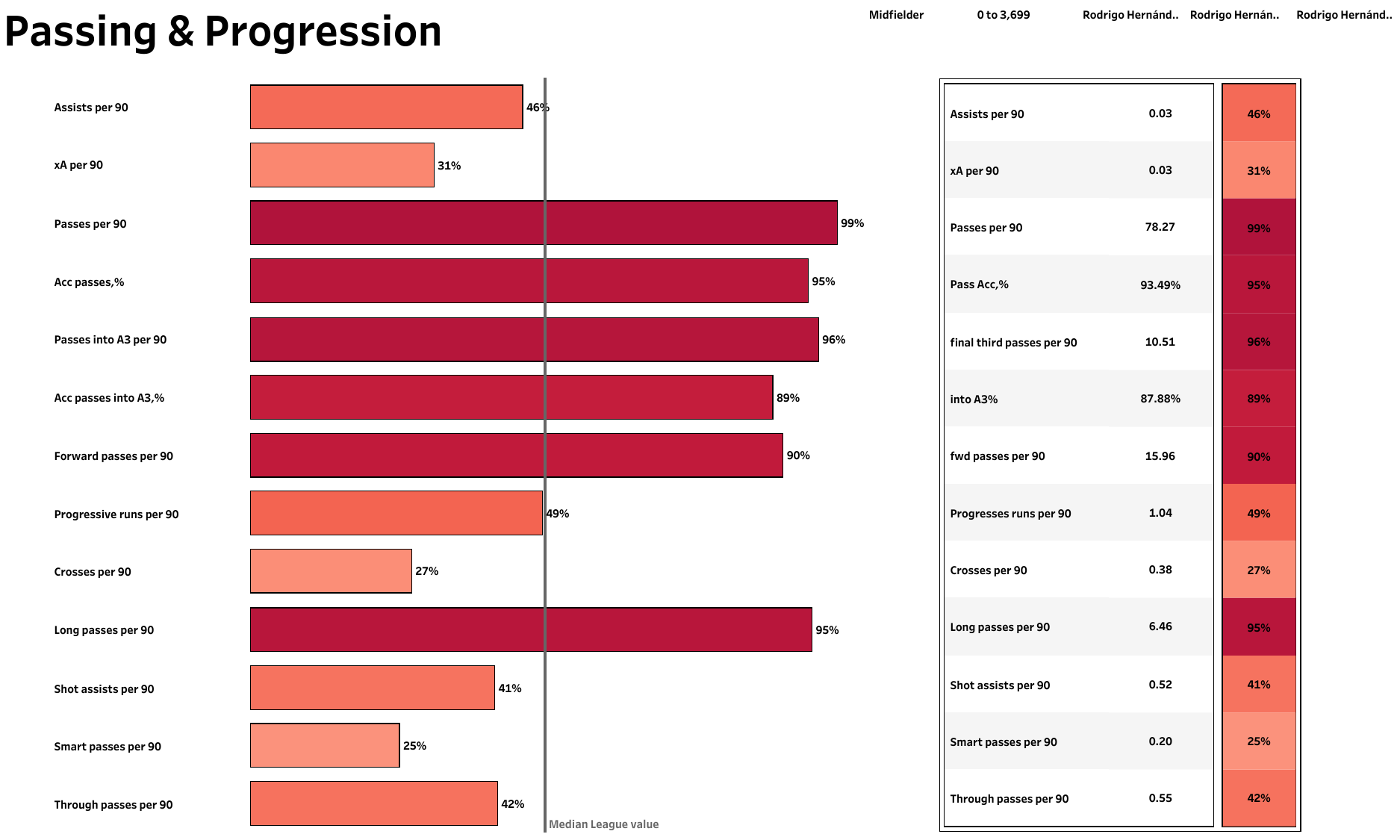 In addition to his seven goals, Rodri assisted twice, which meant that he was involved in a goal every 320 minutes. He was among the most dependable midfielders, completing 93.5% of his passes out of 78 attempts per 90. He was also excellent when it came to ball progression as he attempted 10.5 passes into the final third per 90, finding a teammate on nearly 88% of the occasions. The Spaniard’s 6.46 completed long balls per 90 ranked him in the 95th percentile among midfielders. 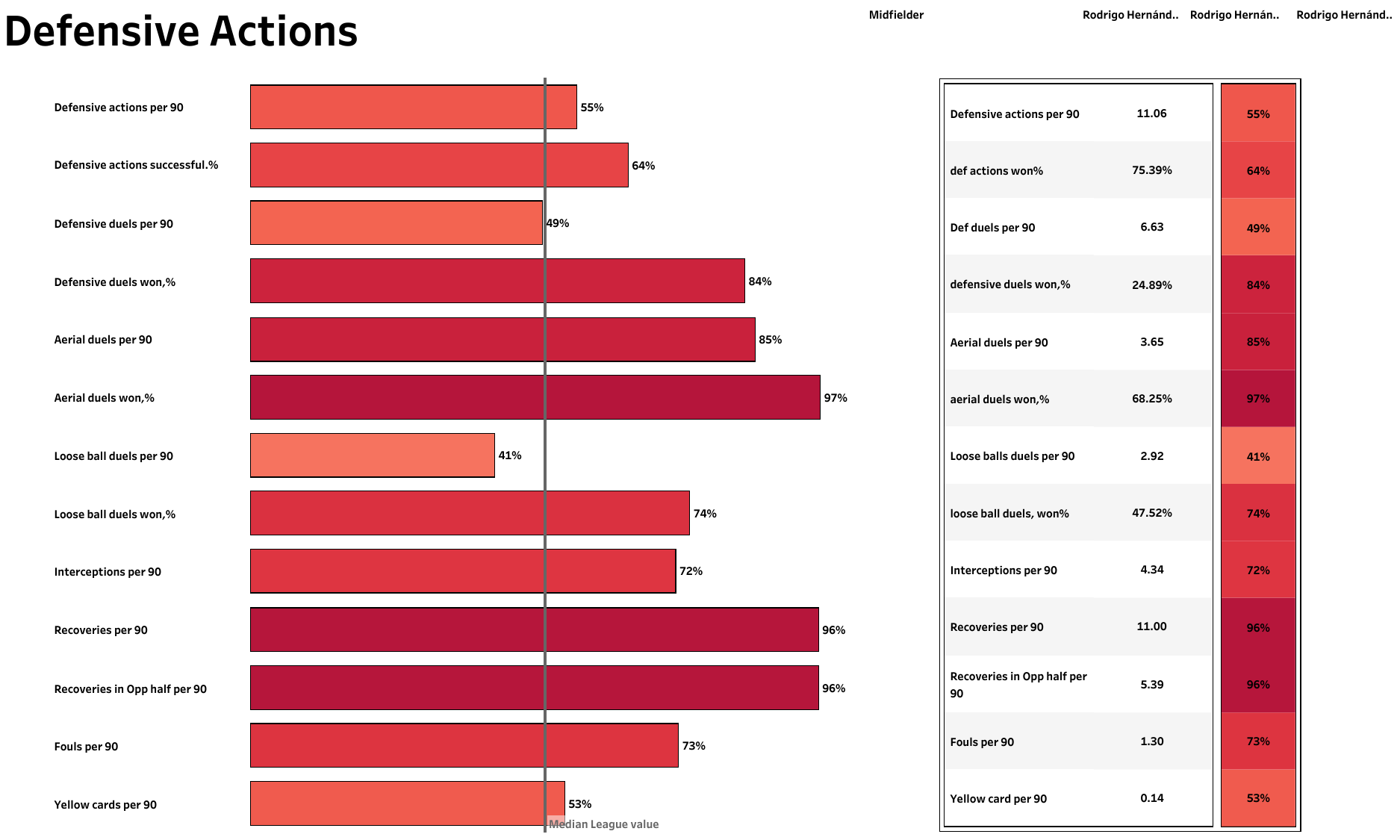 Rodri was also very reliable when defending against the opposition teams. He won three-fourths of his defensive actions out of 11 attempts per 90. With a win rate of nearly 25% in defensive duels, he was ranked in the upper quintile. The midfielder used his towering frame of 191 cm to dominate the air as he won 68.25% of his 3.65 attempted duels per 90. That win rate put him in the top 3% of midfielders. With 5.39 recoveries in the opponents’ half per 90, the former Atletico Madrid man showed his ability to press high up the pitch and as a result, was placed in the 96th percentile. 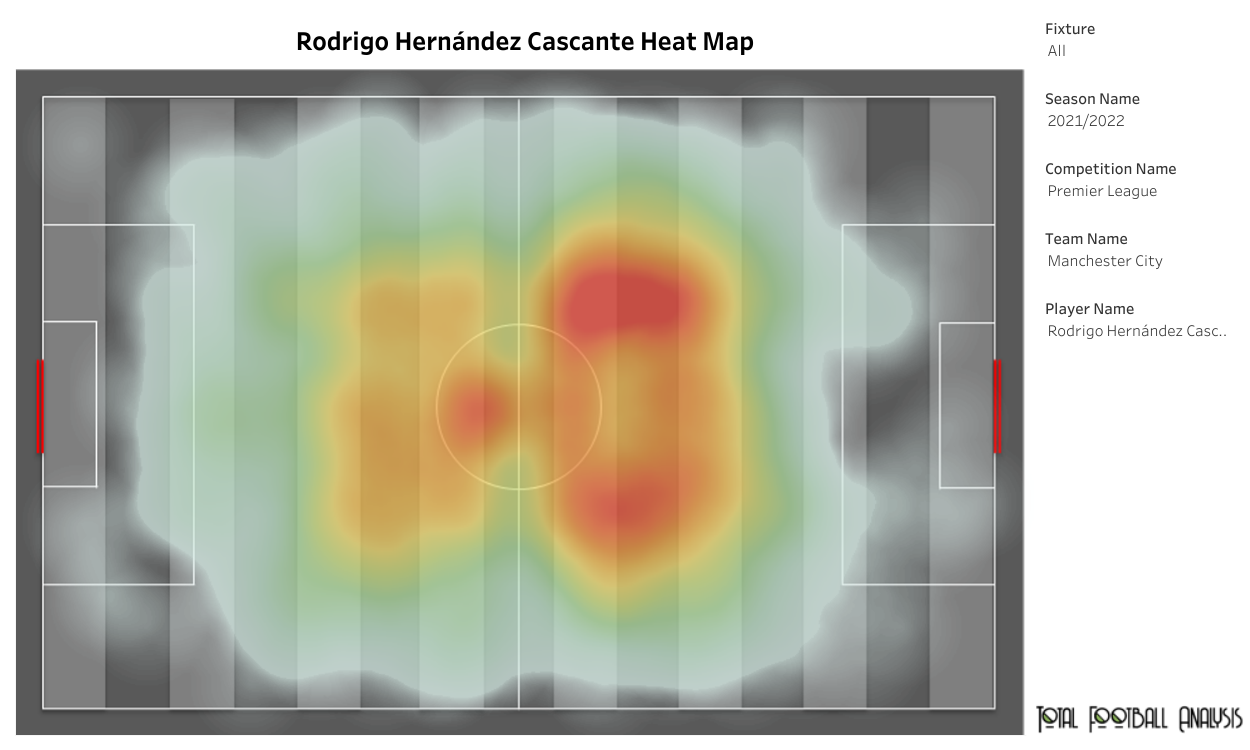 Since Manchester City spent most of their time in the opponents’ third of the pitch, Rodri was most active in the opposition’s half despite being in the base of the midfield. His ball recovery skills were essential for the Cityzens to continue attacking and prevent counterattacks against them. He completed 5.59 progressive passes per 90, 7.56 balls into the final third per 90, 1.13 passes into the penalty area per 90, 6.41 progressive carries per 90 and 1.38 carries into the attacking third per 90. On the defensive end, he attempted 15 pressures per 90 and 3.28 tackles and interceptions per 90.

Rodri has established himself as a key man in Pep Guardiola’s team from his first season in England. He looks set to be among the most valuable defensive midfielders for years to come. That’s the reason Manchester City want to offer a contract extension to the 33-capped Spain international.

The post Under the microscope: Reliable Rodri – Why Manchester City want to extend the contract of the Spanish midfielder appeared first on Football analysis, news, betting and opinion from Man City.