Raheem Sterling put up an impressive performance in the Premier League as he helped  City beat Burnley 2-0 to keep themselves ahead of Liverpool in the Premier League table by one point. The Englishman grabbed two assists for the Cityzens as he set up Kevin de Bruyne and Ilkay Gundogan to get a two-goal advantage in the first half. The England ace has scored 10 league goals and claimed three assists. He has 17 goals in all competitions and has provided seven assists.

Raheem Sterling has had to compete with £100million signing Jack Grealish at Manchester City. With both players preferring the left-winger role, Pep Guardiola has shuffled between the players in the Premier League as well as the Champions League. After his performance against Burnley, Sterling has now shown that he is fully capable of posing a huge threat from the right flank as well. Sterling started on the right wing in place of Riyad Mahrez, who has cemented his place on the right flank in Pep’s XI. Sterling has been both, a goalscorer as well as a creator for City this season. 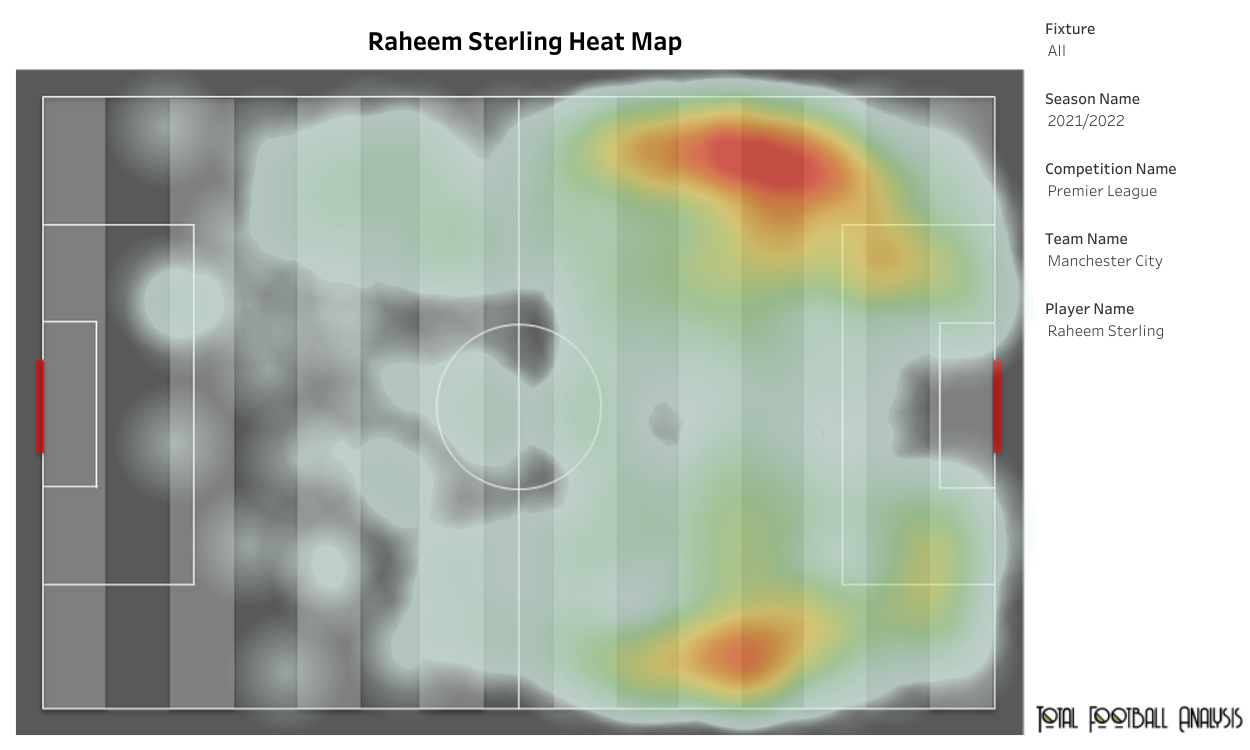 Sterling has long been a huge threat in one-on-one situations, but he has become so much more than that under the guidance of Guardiola at City. From his earliest days in Liverpool’s first team, he used his speed and acceleration to beat opponents, but over time, defenders adjusted to his preference to attack from the outside. He has been used on both flanks by Pep, but his preferred position has always been the left side. 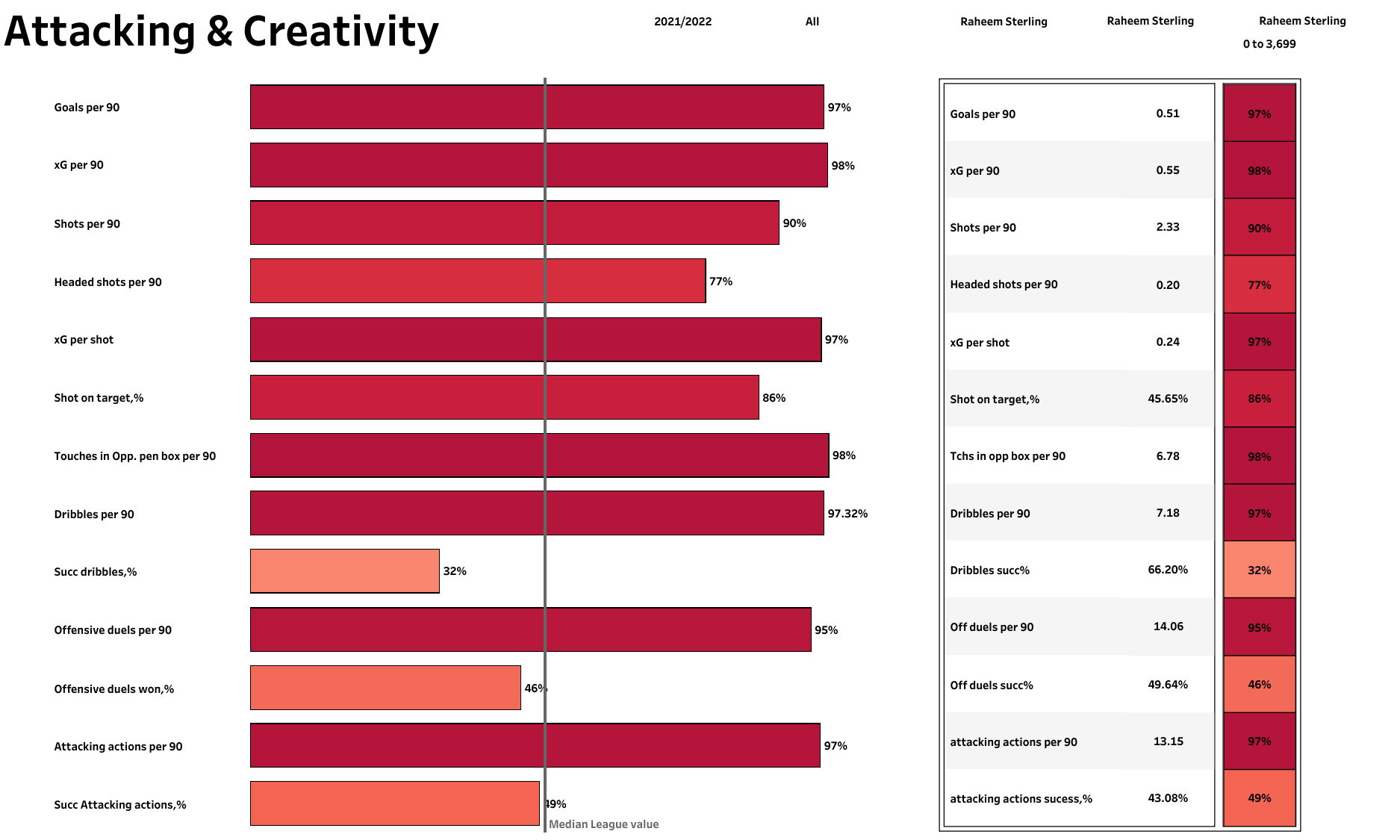 His attacking metrics indicate that his performances have been impressive as his stats are significantly higher than the league median value. Sterling ranks highly for the number of attacking actions he has attempted per 90 minutes and has also been able to complete 43% of his attacking actions. He has taken 6.78 touches in the opposition’s penalty box per 90 minutes and has completed 66.2% of his dribbles. Sterling has attempted 2.33 shots on goal per 90 minutes and has generated an average xG of 0.55. Since moving to City, he has worked on cutting back infield and has become deadly when doing so. Sterling is equally dangerous on either wing, and his ability to go down the line or cut infield makes him not only particularly unpredictable but capable of providing a better link with his attackers. 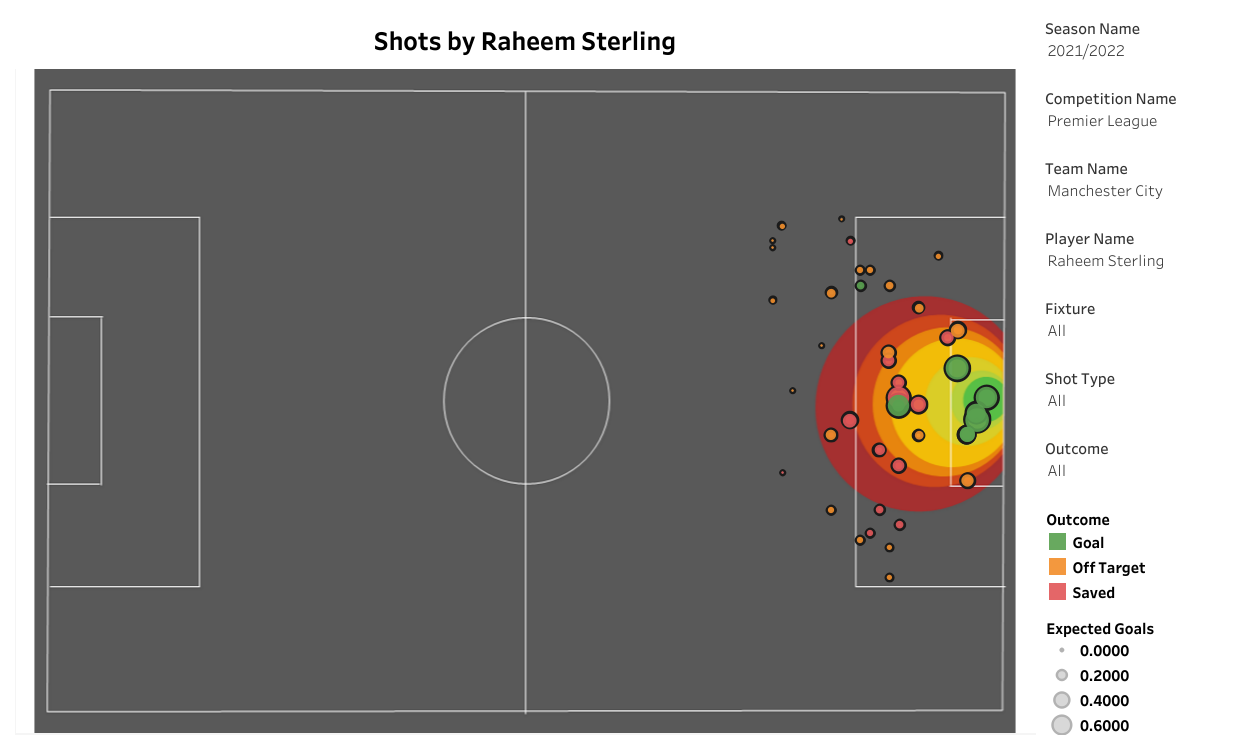 Sterling spends the majority of his time on City’s left flank, where he has become more dangerous thanks to his improved shooting with his right foot after cutting infield. Sterling has attempted 44 shots on goal and has managed to keep 45% of his shots on target. 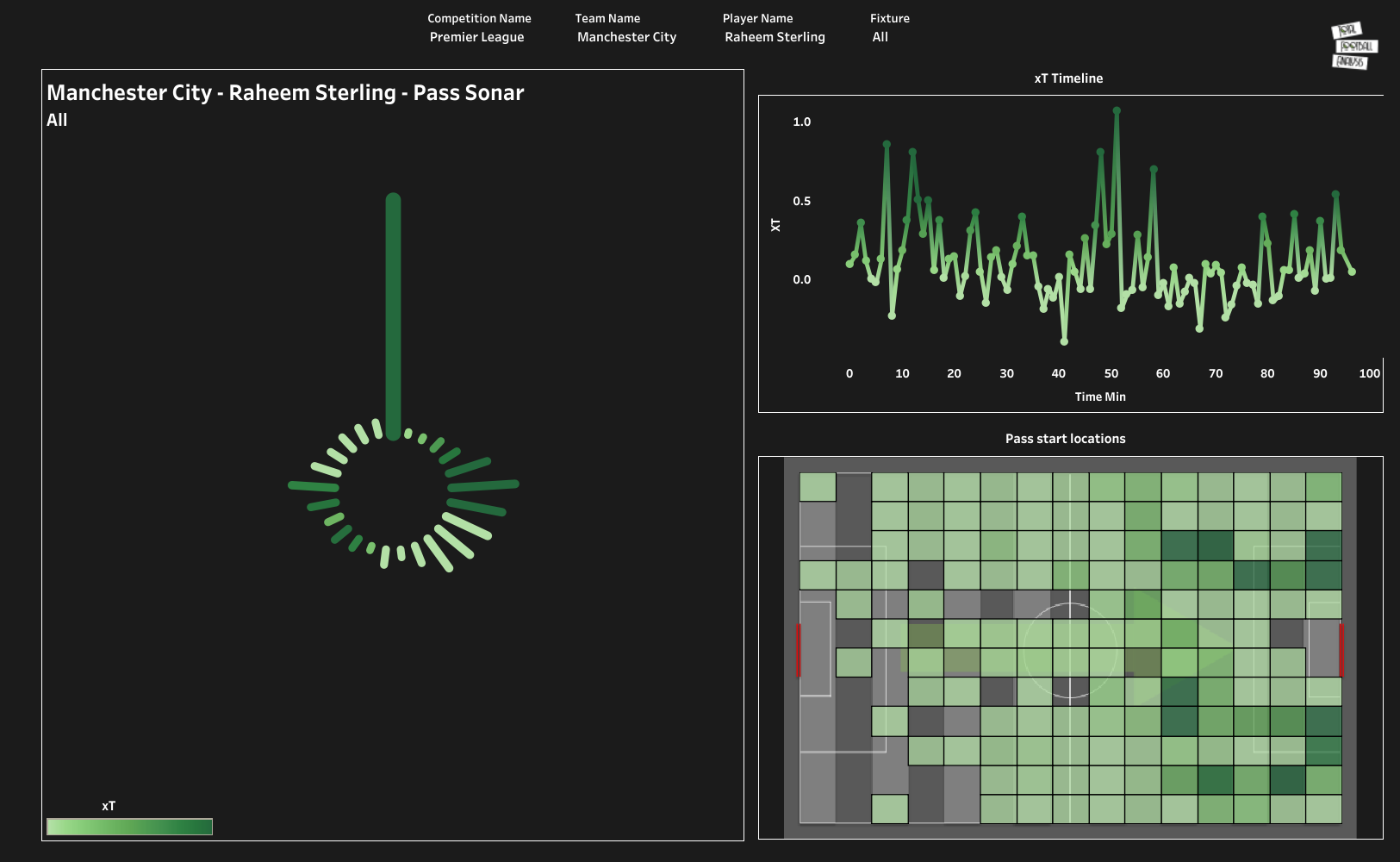 The above visual shows us the pass sonar for Sterling this season and also shows us the various positions from where he has been most threatening. The majority of Sterling’s passes have been in the forward direction, as seen in the above visual. He has been highly threatening from both flanks as he has high xT creation zones on both sides of the pitch. He has been very effective throughout the game and has generated a high xT.

Sterling’s form is a major plus as City head into a tough week where their chances of winning three trophies will be determined. With two Champions League quarter-final legs against Atletico Madrid, joined with league and FA Cup meetings with Liverpool.

The post Under the microscope: Raheem Sterling – Man City’s most consistent player this season appeared first on Football analysis, news, betting and opinion from Man City.