Phil Foden has had a remarkable rise at Manchester City, being the first notable man to break into the first team from the academy. Pep Guardiola had so much faith in the Englishman that he was tasked with replacing club legend David Silva after the Spaniard left at the end of the 2019-20 season. And Foden has not disappointed since. The 22-year-old has won not one but two Young Player of the Season awards, with the one for 2021-22 being more impressive than the one in 2020-21. 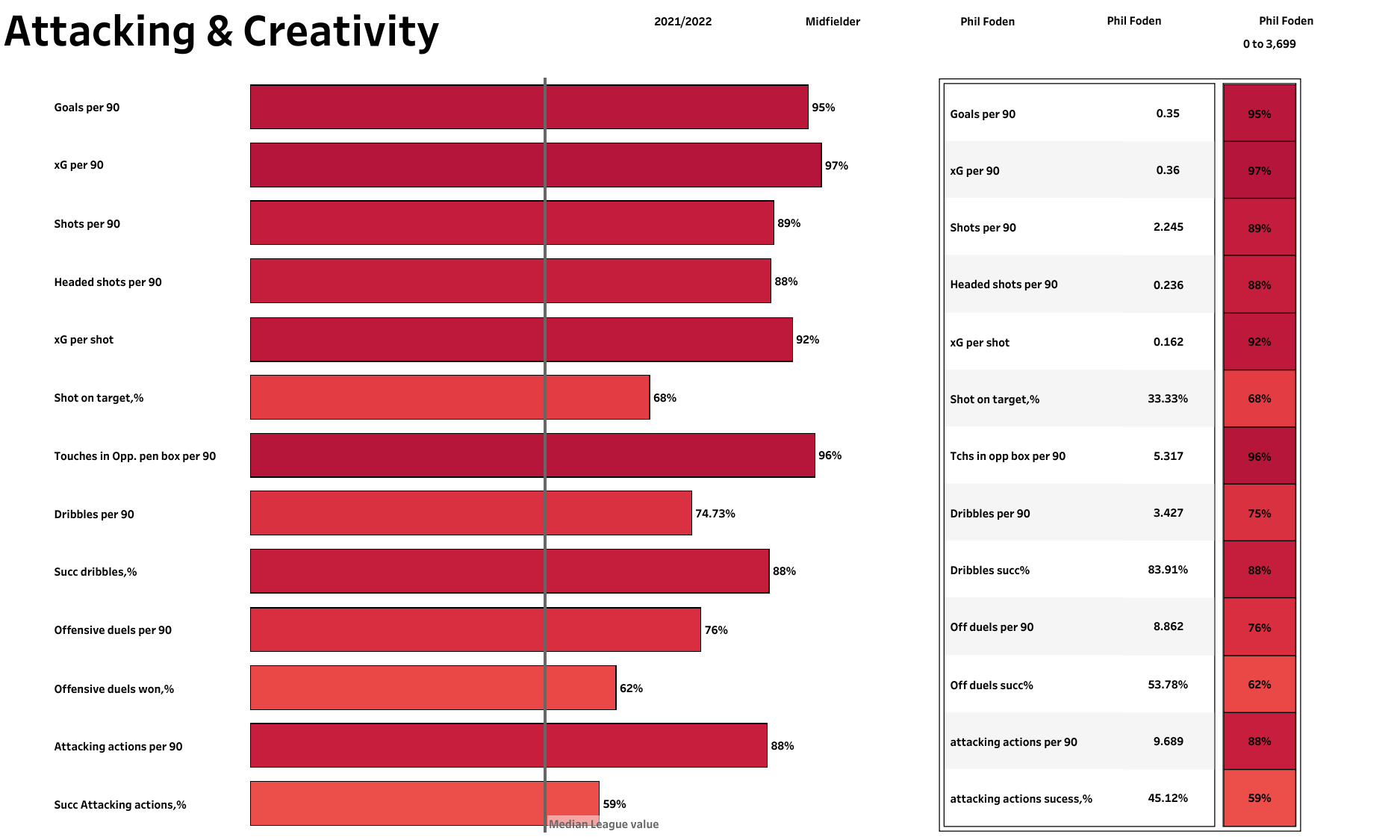 Foden made 28 appearances for Manchester City in the recent Premier League season,  starting in 24 matches and playing a total of 2,128 minutes. The 22-year-old scored nine times for the Cityzens as they won the league title on the final matchday of the season. The Englishman’s nine strikes came at a rate of 0.35 per 90, which put him in the top 5% among midfielders. Foden’s xG stood at 0.36 per 90 as he took 2.2 shots per 90 and generated an xG per shot of 0.16. The Stockport-born midfielder registered over five touches in the opposition’s penalty area per 90 – among the top 4% of midfielders. Additionally, Foden also attempted 3.43 dribbles per 90 at an astonishing success rate of 83.91%. 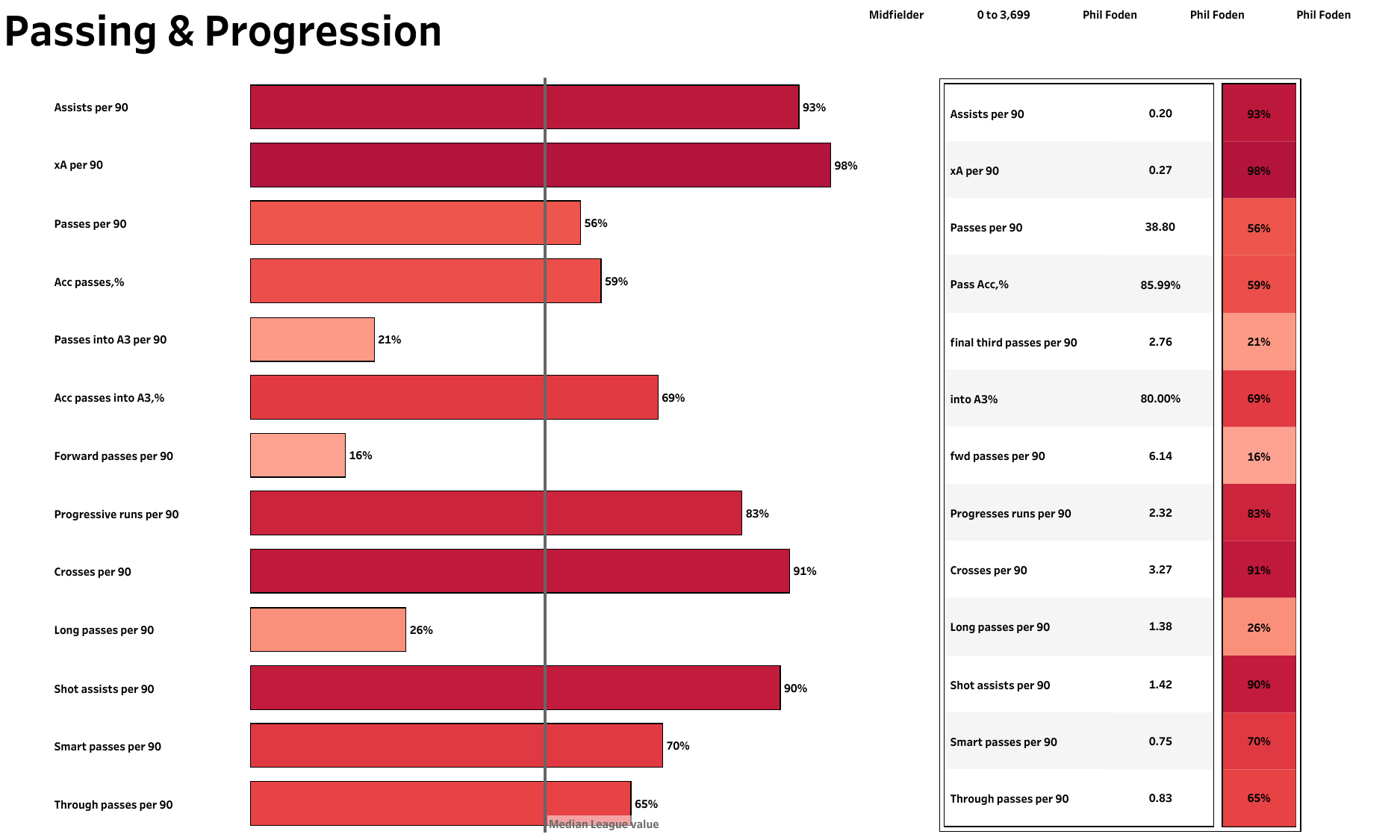 Besides the nine goals netted, Foden provided five assists in the recent Premier League campaign, though he underachieved on his xA of 0.27 per 90, which put him in the 98th percentile for midfielders. Foden attempted just below 39 passes per 90 at a pass accuracy of nearly 86%, which was only above-average for a Guardiola team. The 22-year-old made 2.3 progressive runs per 90 and 3.27 crosses per 90, the latter of which ranked him among the top 9% of midfielders. The Englishman also generated 1.42 shot assists per 90, putting him in the 90th percentile for midfielders. 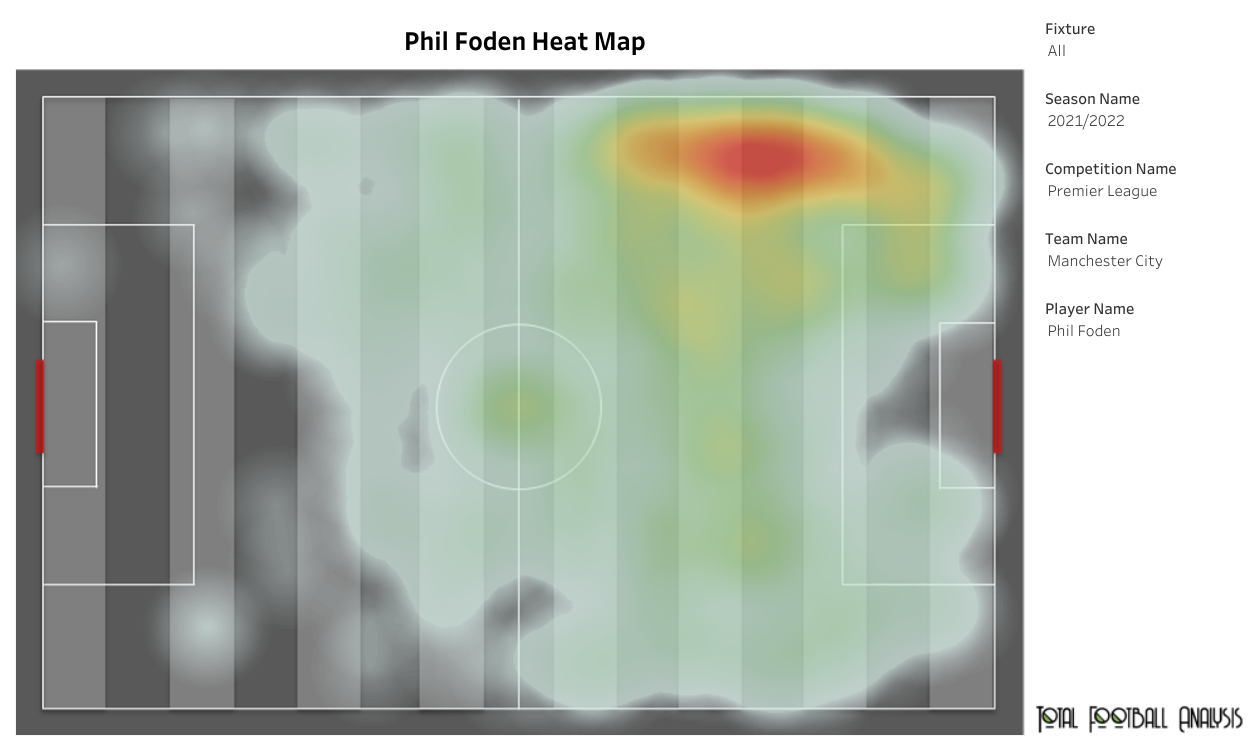 As seen in the above heat map, Foden predominantly played on the left wing. Foden received 7.8 progressive passes per 90, showing that he made himself available in advanced positions on the pitch. The Englishman completed 1.69 passes into the opponents’ penalty area per 90 and 1.48 carries into the opposition’s penalty box per 90. Among the City regulars, the 22-year-old also worked the hardest off the ball as he averaged 17.4 pressures per 90. 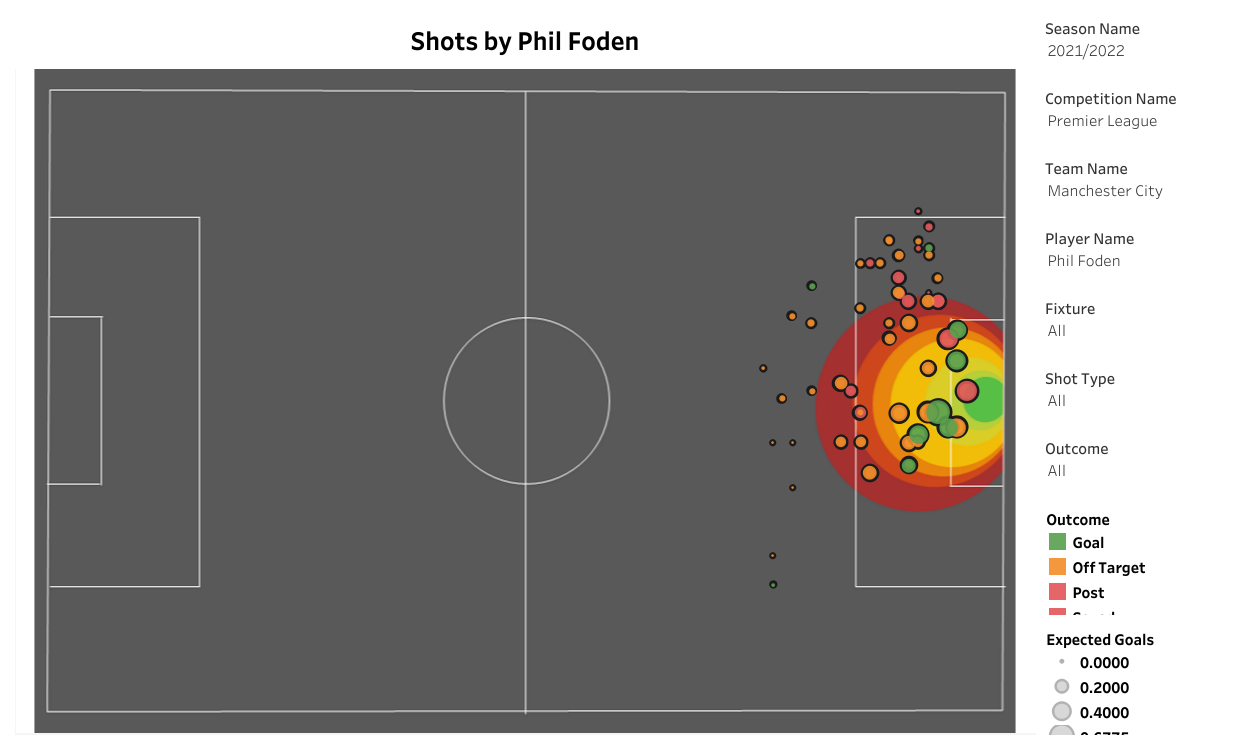 From the above shot map, we can see that Foden took the majority of his shot attempts from inside the box. In fact, out of his nine goals, only two came from outside the box. Overall, Foden attempted 58 shots and hit 22 of them on target, giving him a conversion rate of 6.44 shots per goal scored.

Having won his second straight Young Player of the Season award, Phil Foden looks set to lock his place in the Manchester City midfield and attack for years to come, especially with Kevin de Bruyne and İlkay Gündoğan turning 31 and 32, respectively, by the end of the year.

The post Under the microscope: Phil Foden – A statistical review of the Premier League Young Player of the Season appeared first on Football analysis, news, betting and opinion from Man City.