The opening fixture of the English Premier League 2022/23 will see Arsenal travel to Selhurst Park to take on Crystal Palace. Both teams had a decent pre-season, and their players are fully charged for the season. Arsenal made some crucial signings in the summer to strengthen their attack and defence. They are yet to sign another central midfielder and are still after Leicester City’s Youri Tielemans. The midfielder is also unsettled at the club and has opted for a move away from the King Power stadium. They will continue their pursuit of the player. However, the Spanish manager will welcome back Thomas Partey to the midfield. He missed 14 games in the English Premier League due to injuries and is looking fit for the new season. Let us look at how Arsenal could line up for their opening fixture and who is likely to miss the match.

Mikel Arteta signed Gabriel Jesus and Oleksandr Zinchenko from Manchester City. He has already worked with the players when he was the deputy of Pep Guardiola. His other crucial signings were Fabio Vieira from Porto and Marquinhos from Sao Paulo. William Saliba is finally back at the club after spending two seasons away from the Emirates stadium. Arsenal are lucky as they haven’t lost a regular starter from last season. Alexandre Lacazette is the biggest departure from the team. He failed to cement his spot after disappointing performances, and the Gunners made the right move by selling him.

Arsenal have a few injury concerns, and Arteta won’t have a fully fit squad for the season opener. Both his injury-prone full-backs, Kieran Tierney and Takehiro Tomiyasu, are expected to miss the game, alongside Emile Smith-Rowe and Fabio Vieira. There are no other injury concerns, so, let us look at the players who will make it to the playing XI. 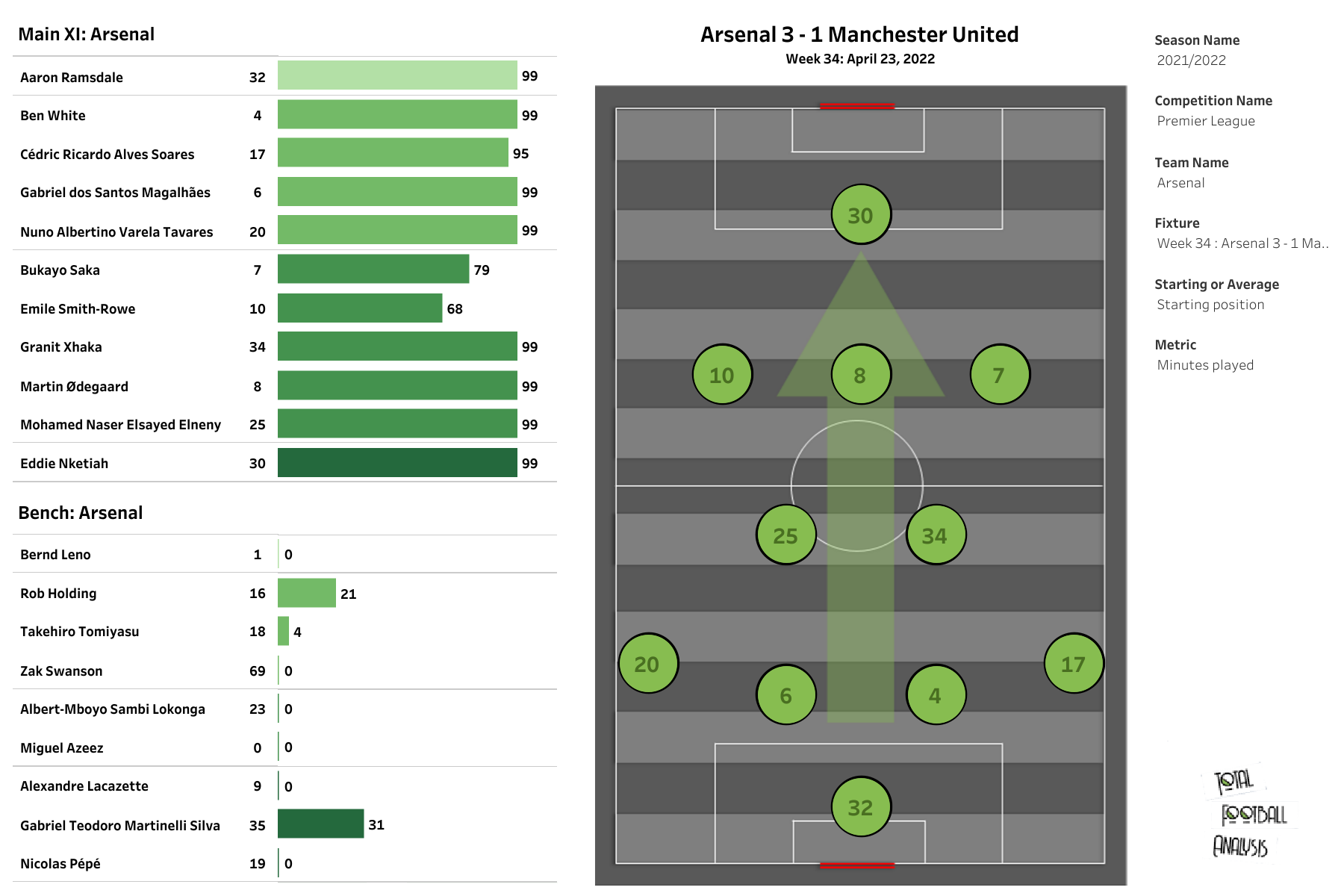 Arsenal play in a 4-2-3-1 formation, and Arteta is likely to stick with the same formation in the new season. Aaron Ramsdale will be featuring between the sticks after impressing everyone in his first season at the club. He’ll be guarded by a back four that includes newcomers Oleksandr Zinchencko, Gabriel, William Saliba, and Ben White. In the absence of some of the players, Zinchenko will play as the left-back and Ben White will play as the right-back. Gabriel was excellent last season and Arsenal have done well to retain him. He will play as the left centre-back alongside Saliba, who will make his long-awaited English Premier League debut. 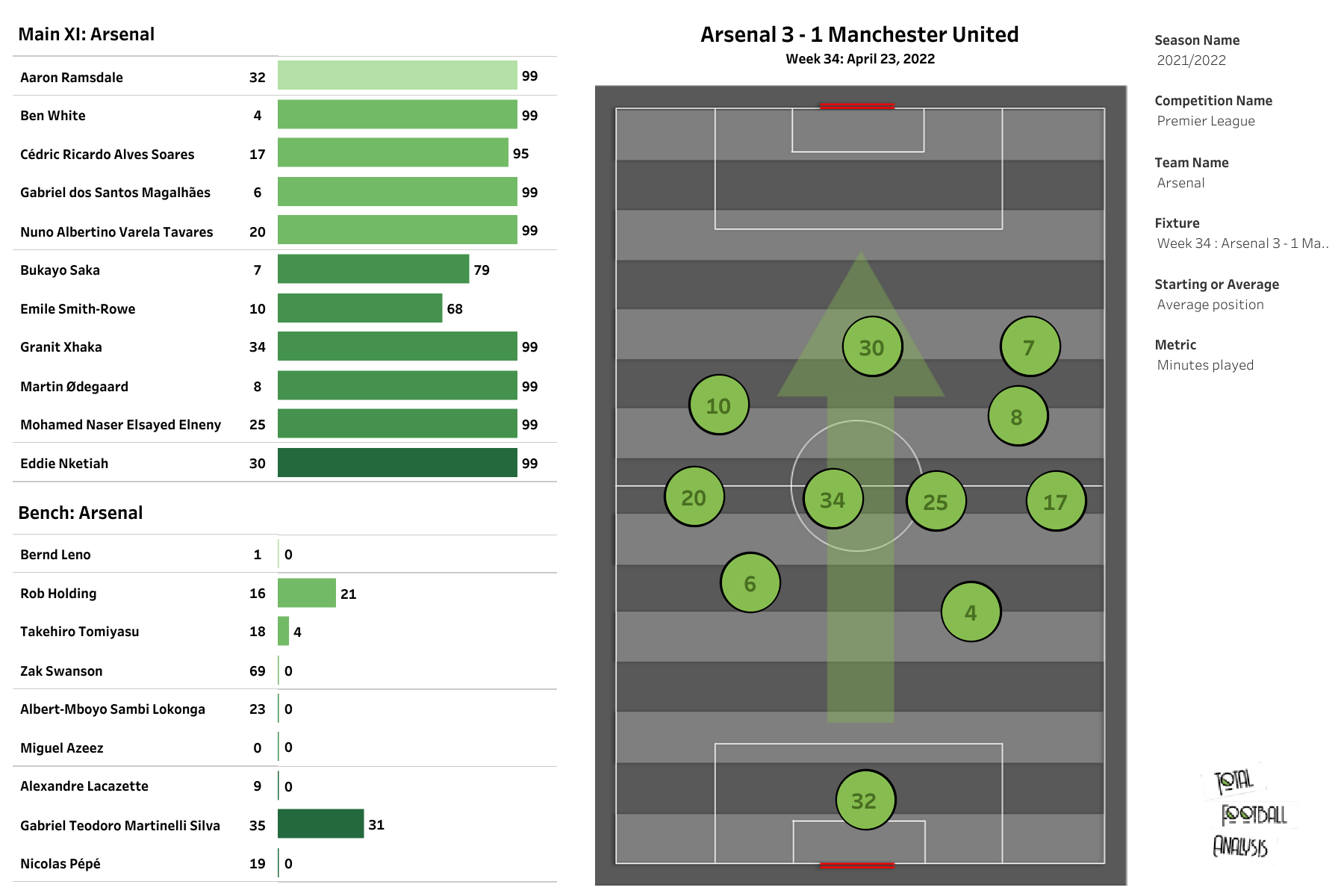 The above viz shows the average position of Arsenal players while playing in this formation. Granit Xhaka and Thomas Partey will take charge of the midfield. Gabriel Martinelli, club captain Martin Ødegaard, and Bukayo Saka will be the creative force behind the lone striker,  Gabriel. These four players are young, and their pace and skill can create a lot of trouble for Crystal Palace’s defence. The above viz shows that Ødegaard drifts towards the right, which allows Saka to play a high line.

Arsenal will look to start the season on a positive note after failing to do so last season. Mikel Arteta’s side has new recruits, and they will also look to make a mark in front of Arsenal fans. The Gunners will go with their strongest XI for the opening game.

The post Under the microscope: Mikel Arteta’s strongest 11 for the season opener against Palace appeared first on Football analysis, news, betting and opinion from Arsenal.