Leicester City have been plagued by injuries this season, a scenario which has contributed to their inconsistent performances in the league. Brendan Rodgers has had to shuffle his squad multiple times to find the right combination of players. While they have been shaky in terms of defense, conceding 43 goals in 25 matches, the Foxes have displayed some decent performances in terms of the attack. Despite injuries to prominent attacking players such as Jamie Vardy, James Maddison, and Harvey Barnes at some point during the season, the Foxes have found the depth in their squad to plug up the holes left by these players. One of the players who has provided Rodgers with the attacking depth is the veteran winger, Marc Albrighton.

The 32-year-old has been a prominent presence at the King Power Stadium since joining the Foxes in 2014. Along with Jamie Vardy and Daniel Amartey, Albrighton is among the remaining three Leicester City players to have lifted the Premier League title in the 2015-16 season. Despite multiple managerial changes, Albrighton has found his place in the Foxes’ squad regularly. He has made 215 appearances for the Foxes in the league, scoring 12 goals. Although his goal output for a winger leaves much to be desired, Albrighton’s tenacity, grit, and self-sacrificial nature have won over every manager that he has played under.

This season as well, the veteran winger has continued to be counted upon by Brendan Rodgers. So far, Albrighton has made 14 appearances in the league, starting in nine matches. He has been a crucial presence in Rodgers’ squad, slotting in at right-wing, right-midfield, and even at right-back.

Let’s take a look at his stats to gauge the performances of Leicester’s dependable veteran winger. 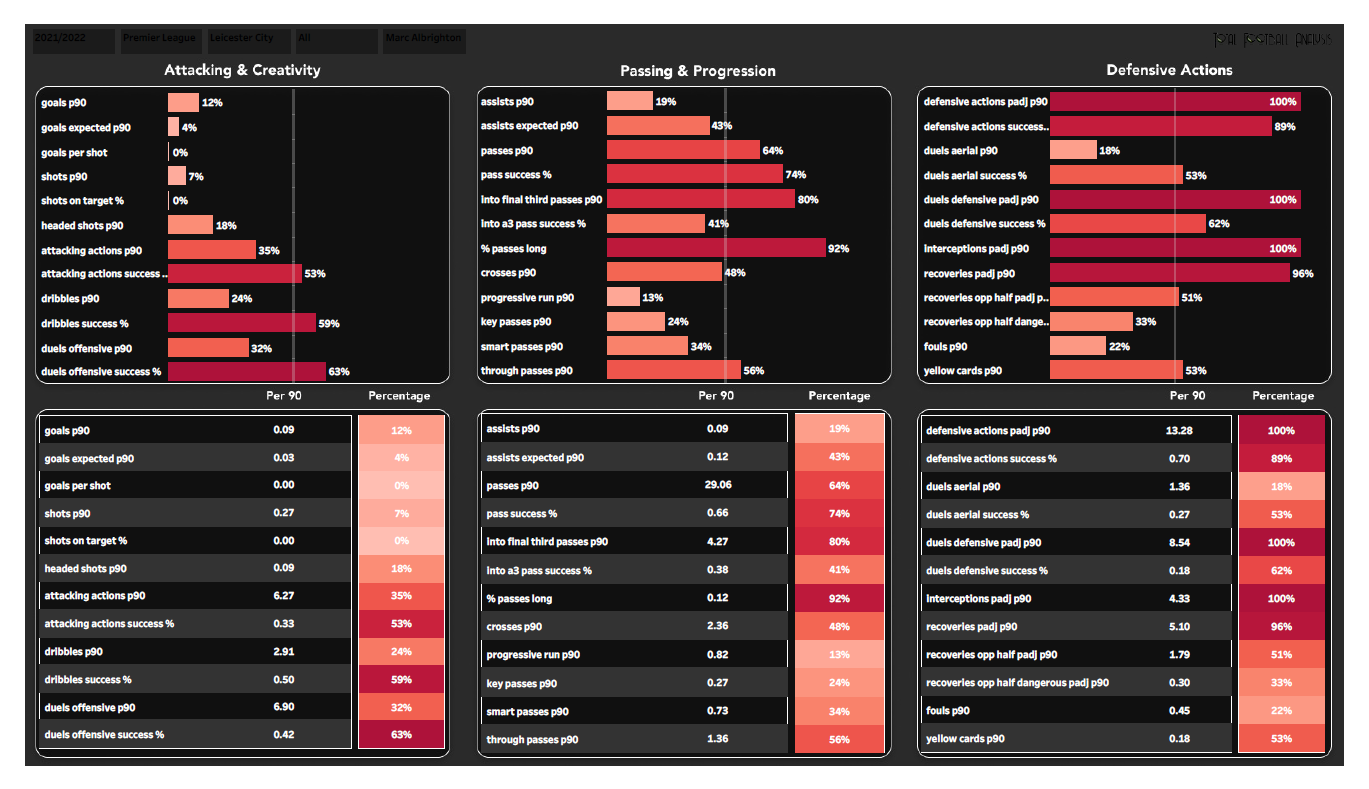 In the above viz., we can see Albrighton’s overall stats in the league. His attacking & creativity stats indicate that he has performed below the league median in terms of the majority of the metrics, while his passing & progression stats are similarly unimpressive. In terms of defensive stats, Albrighton has managed some decent stats, with the most notable stats being defensive actions per 90, defensive actions success rate, interceptions per 90, and recoveries per 90. Albrighton is a traditional winger who excels at delivering impressive crosses into the penalty area. His best abilities are high work rate and willingness to trackback. Albrighton provides balance and support to Leicester’s better-attacking outlets. He is tasked less with attacking & creativity, excelling instead in pressing and recoveries. 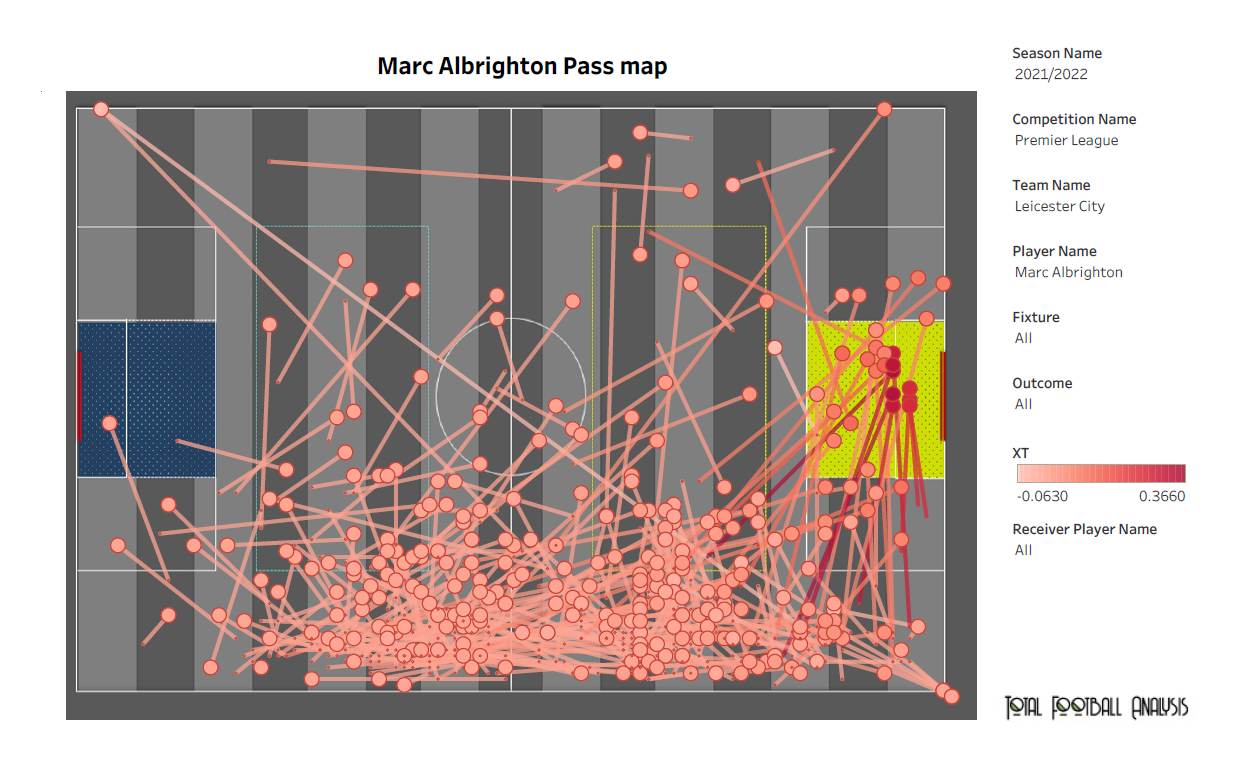 The above viz. highlights Albrighton’s pass locations on the pitch. We can see the wide array of passes that he has delivered on the right wing. The 32-year-old has also delivered multiple threatening crosses into the opposition’s box. While his game is not based around creating many chances, Albrighton nonetheless, looks for opportunities to play forward and find his teammates through his crosses. He plays his best football as a supporting act. 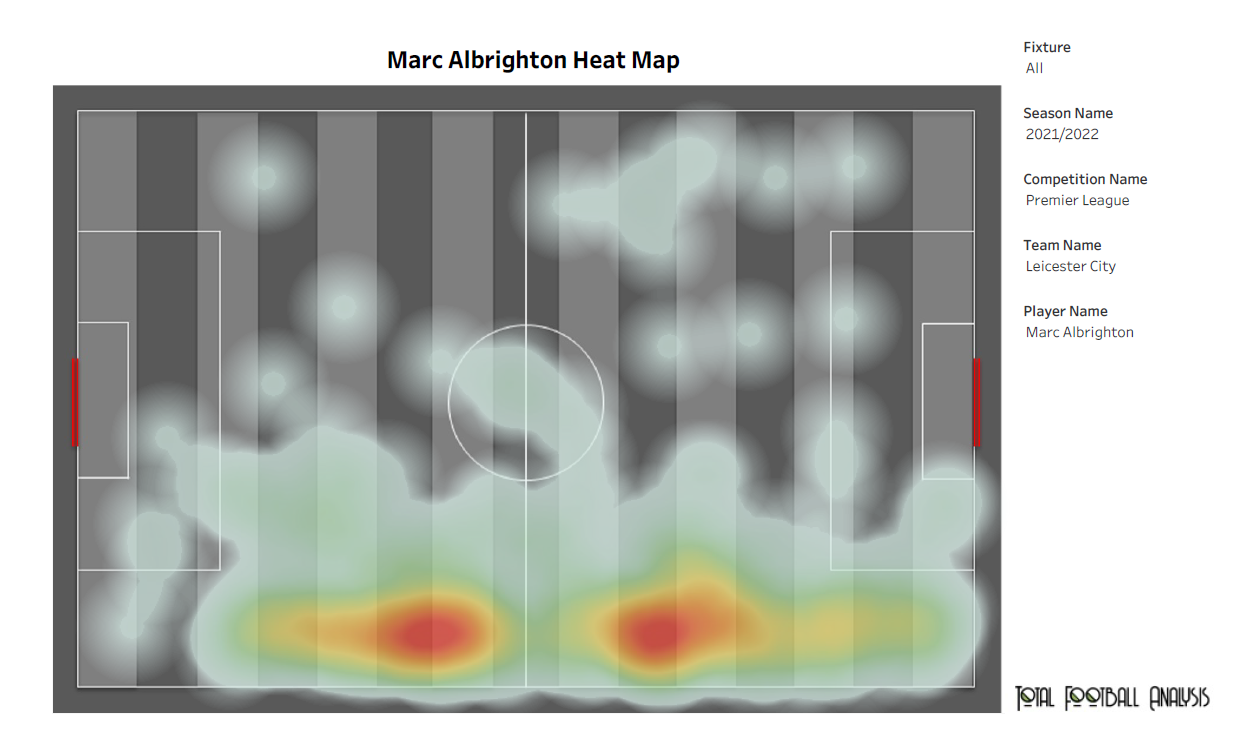 The above viz. displays the areas of the pitch where Albrighton is most active. His impressive work rate and movement up and down the right flank are evident from his heat map. In addition to his relentless work rate, Albrighton is versatile enough to adapt to different roles. He is capable of playing as a winger, wing-back, and right-back. Although this season, he has been deployed mostly as a right-midfielder.

For over six seasons now, Albrighton has been influential as a supporting act for the Foxes. His tireless work rate, determination, and tenacity have afforded him a place under every manager. The 32-year-old has carried on the role of Leicester’s dependable veteran this season as well.