The Reds are certainly one of Europe’s most efficient teams from set-piece situations. For a long time, Liverpool have dominated set-pieces. This season, Jurgen Klopp’s players have looked quite dangerous from set-pieces. Liverpool’s full-backs deserve a lot of credit for this effectiveness. The Merseysiders’ corner-taking duties are shared by right-back Trent Alexander-Arnold and left-back Andy Robertson. Both players are excellent at putting ideal balls into the box, whether from indirect free-kicks or corners. They also have an array of players who are really good at heading the ball. Virgil van Dijk, Fabinho, Joel Matip, and Ibrahima Konate are the obvious threats from headers.

Liverpool’s ability with the dead ball is having a direct impact on their results. There have been several games where Liverpool have struggled to find the breakthrough from open play and ended up scoring a goal from a set-piece situation. Liverpool top the Premier League standings for goals scored from set-pieces this season with their tally of 15 so far. Six of those have been the game’s first goal. Man City are second with 14 set-piece goals. West Ham and Brentford are level on third with 13 goals from set-pieces.

Van Dijk’s return from injury this season has given Liverpool a huge advantage at set-pieces, given his height and prowess at attacking the ball. 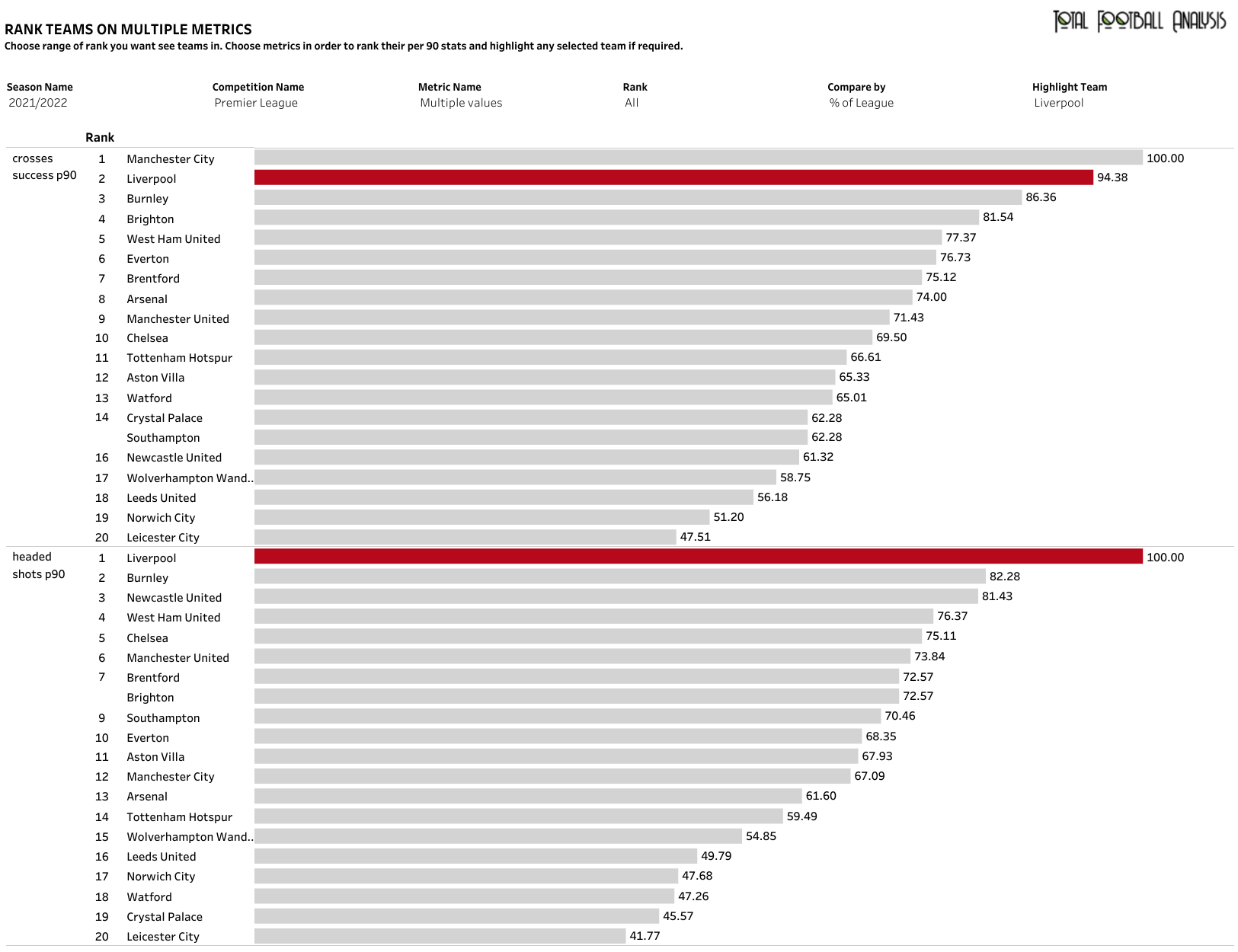 The above visual indicates that Liverpool rank highly for the number of headed shots per 90 as well crosses into the box per 90 minutes. The movement of the Liverpool players in the box is one of the vital reasons why the Reds are so threatening from set-pieces. The other players in the box try to create space for players like Van Dijk, Konate or even Matip, who are good in the air and can win aerial balls cleanly. The taller players start deeper and come running into the space created by their teammates. This gives the opposition defenders a lower chance of winning the aerial duel as it is tough to mark their man.

Liverpool have not just been effective from set-pieces, but they have managed to take the lead in games from these situations. Their win against Manchester City also kickstarted with a set-piece goal from Konate. The Reds have won 81% of the league matches in which they scored first since the summer of 2016 and lost just four of the 146 games in question. The importance of being able to break the deadlock from a set play can’t be underestimated.

The post Under the microscope: Jurgen Klopp’s men have become the set-piece specialists in Europe this season appeared first on Football analysis, news, betting and opinion from Liverpool.