Manchester United were successful in bringing back Jadon Sancho to the English Premier League by signing him from the German side Borussia Dortmund. The Red Devils wanted a creative player who could add spark to their attack. Sancho had already established his name after impressive performances for Dortmund over the years. He was a much-awaited signing and had a lot of pressure on his shoulders. Although it took him some time to settle, Sancho started contributing in the second half of the season.

Sancho made 29 league appearances for Manchester United this season, and nine came off the bench. The 22-year-old scored three goals and provided three assists. 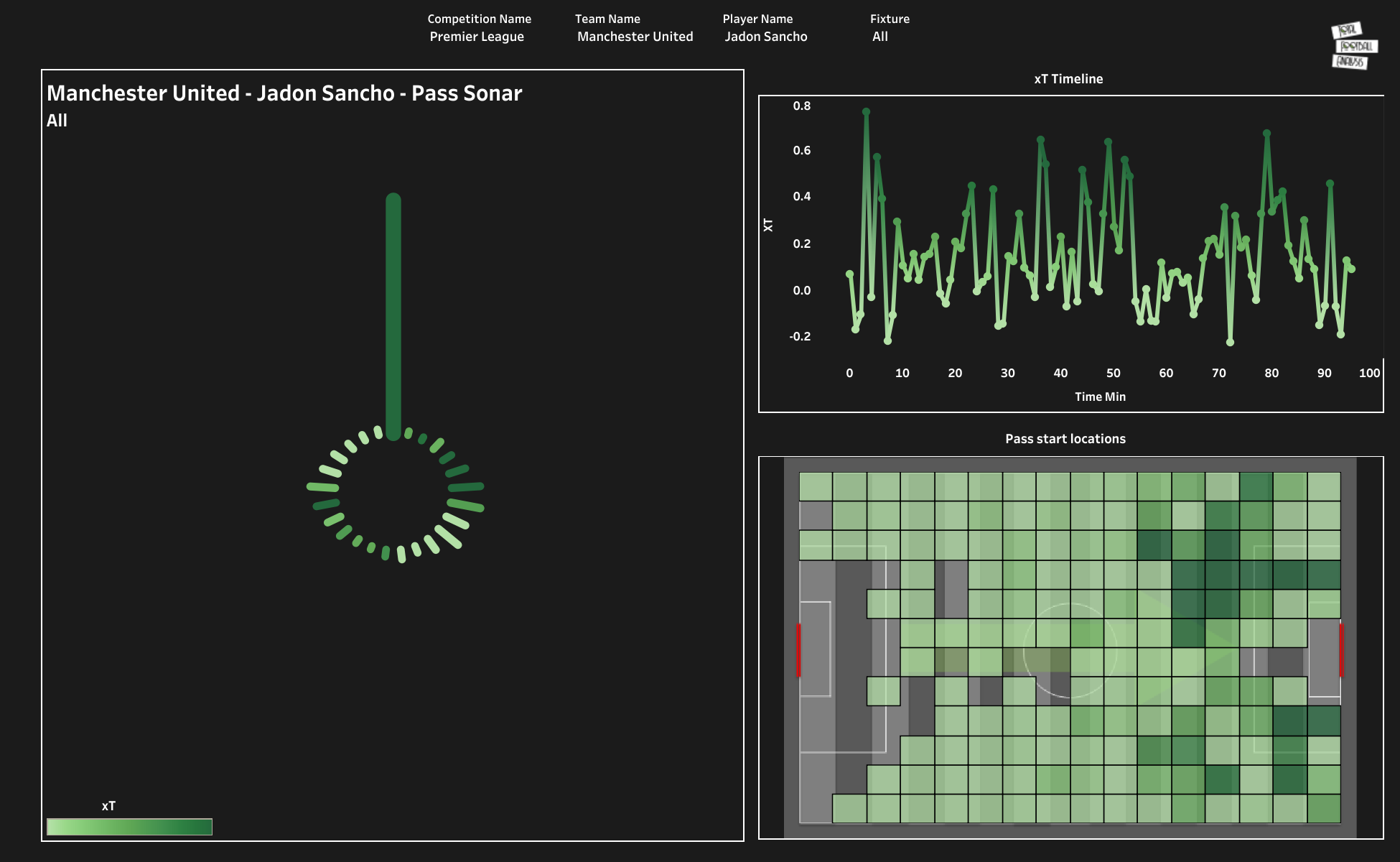 Sancho was mainly signed to solve Manchester United’s attacking problems on the right. However, the forward player played more on the left side throughout the season. He was used as a left forward instead of his favoured right-sided position. The above viz shows the pass start location as well as the threat created from passes at different time intervals. Jadon Sancho featured mostly on the left side and sometimes on the right side. The player is a good dribbler with the ball and attempted 4.68 dribbles per 90 minutes with a 67.3% success rate. He took more than four touches per 90 minutes inside the opposition’s penalty box. The pass start locations also show that he stretches the opposition defence and makes full use of the goal-kick line. 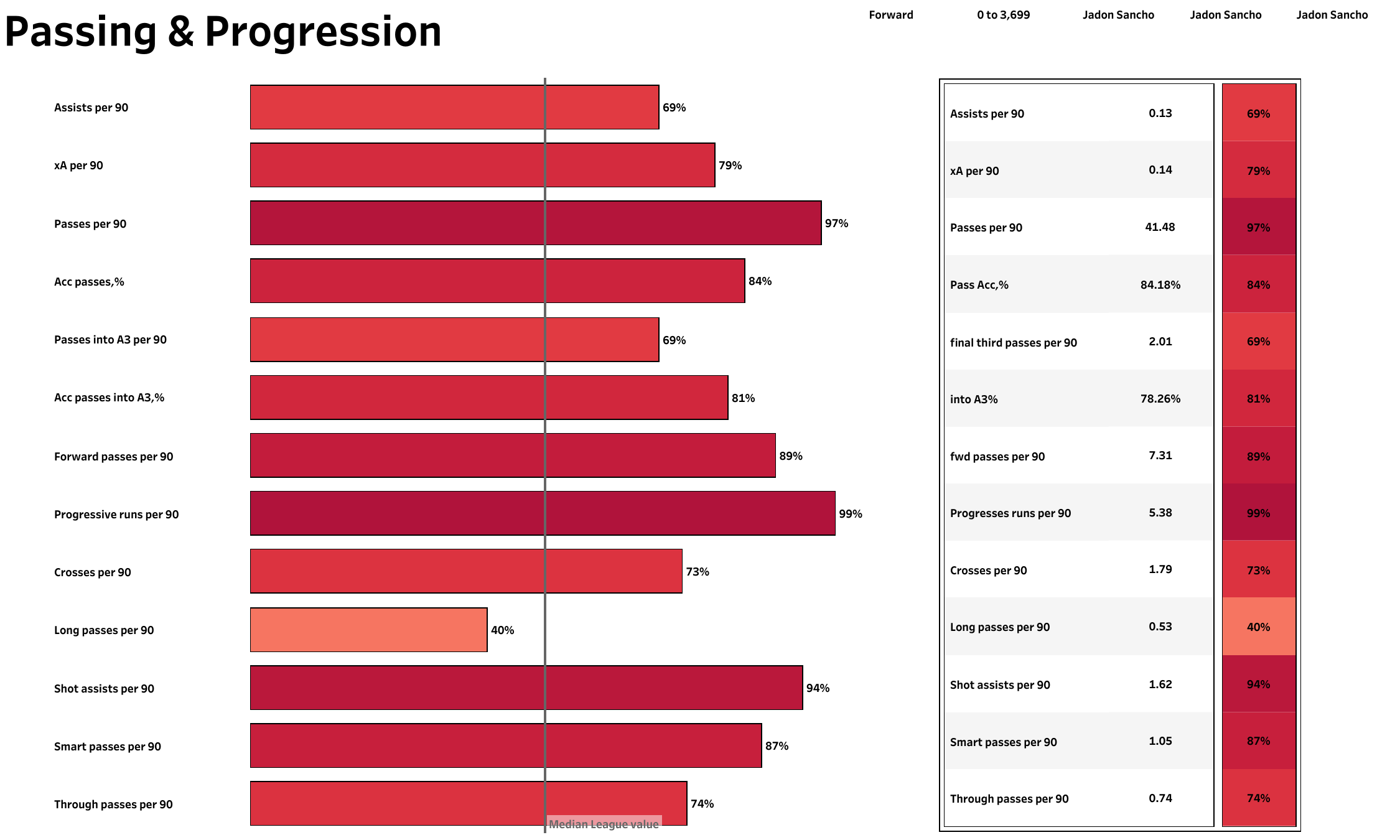 When looking at the above chart, the general rule is that the longer the bar, the better the performance — you can see the league average in the middle, and the % is the percentile rank the player is in. The above viz shows Jadon Sancho’s stats in comparison to the other forward players in the league. He has a very high percentile rank for almost every given stat in the above viz. The Englishman averaged 41.48 passes with an accuracy rate of 84.18%. One of the most impressive things about the youngster was that he made more than five progressive runs per 90 minutes and had a high percentile rank. 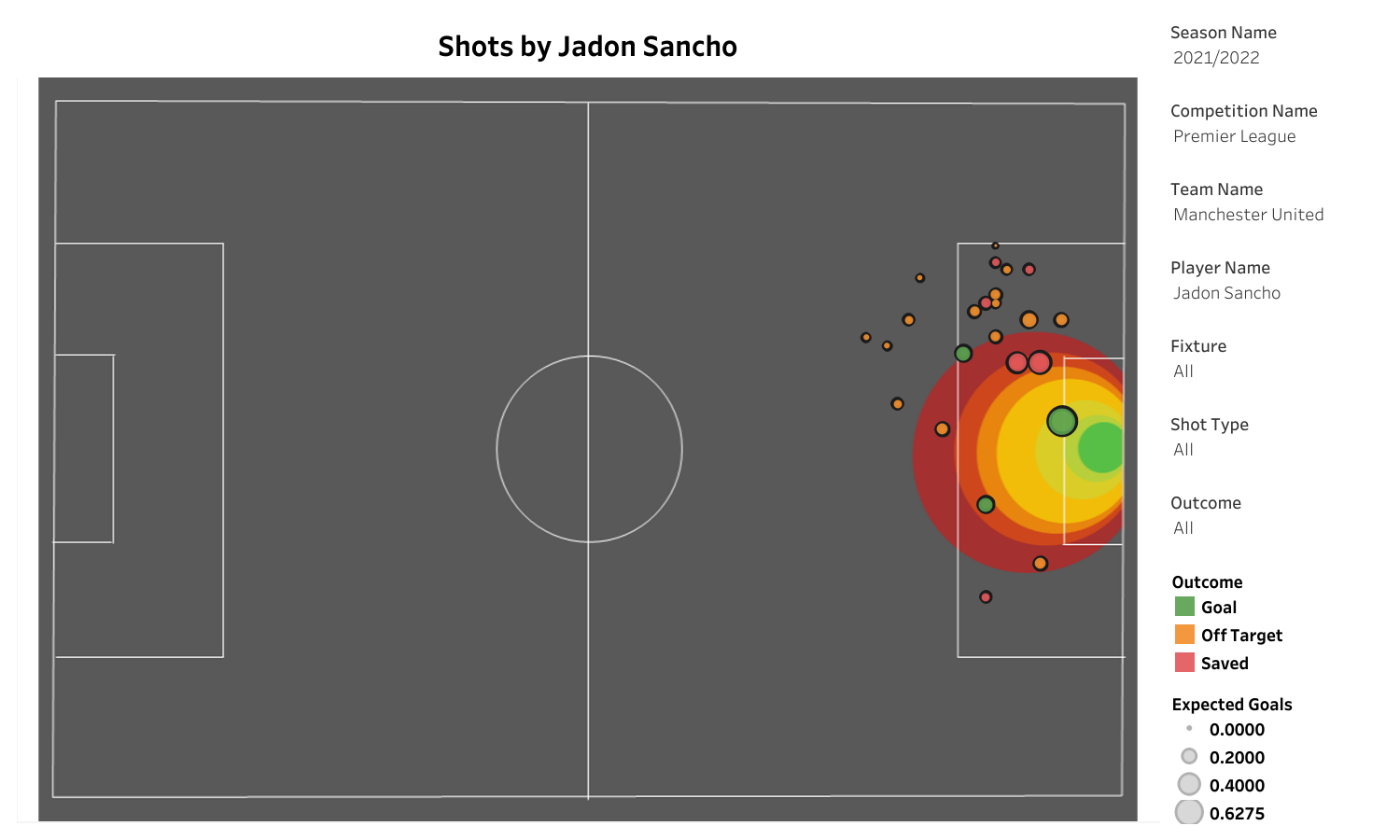 Sancho can also score goals with his right foot and has found the back of the net three times. He attempted 24 shots and managed to hit the target eight times, with a shot accuracy rate of 33.33%. From the above viz, it can be observed that he attempted 18 shots from inside the opposition’s penalty box, and all the shots on target were attempted from inside the box. Overall, Sancho was involved in 8.5 attacking actions per 90 minutes, with a 41.33% success rate.

The 22-year-old had quite a decent first season in the English Premier League. He came with a big reputation from Borussia Dortmund, but Manchester United’s struggles affected his form. He made six contributions and will look to improve his record in the next season. The youngster has the potential to lead his side to a title win. His teammates will expect more assists from him in the next season, and he will get their side back on track.

The post Under the microscope: Jadon Sancho’s first season on his return to English football appeared first on Football analysis, news, betting and opinion from Man United.