When Manchester City signed Jack Grealish from Aston Villa for a fee of €117.5 million in the summer of 2021, the expectations were sky-high for the then 25-year-old. However, one season has passed, and the Birmingham-born winger has disappointed massively for the Cityzens. Grealish may have won the Premier League title in his debut campaign at the Etihad stadium, but the Aston Villa academy graduate was not very influential for the team when he was out there on the pitch. The 26-year-old’s market value, according to Transfermarkt, has declined by 30% from 100 million to 70 million since his move from Aston Villa. 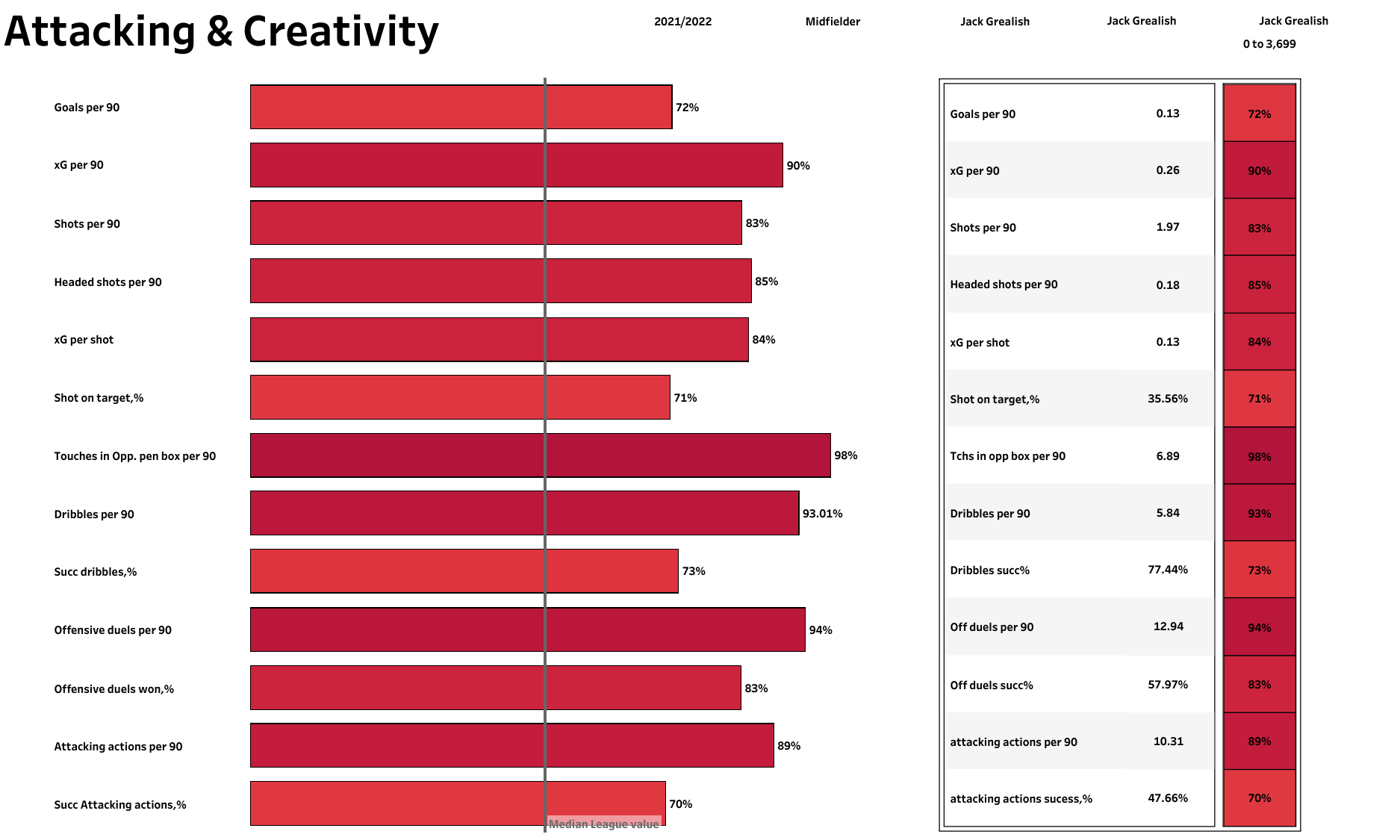 Grealish made 26 appearances for Manchester City in the recently concluded 2021-22 Premier League season where he played a total of 1914 minutes. The former Aston Villa player scored only thrice for the Cityzens at a rate of 0.13 goals per 90, half of what xG per 90 estimated. Grealish fired off less than two shots per 90 and hit only 35.56% of them on target. But to his credit, the Englishman took nearly seven touches in the opposition’s penalty area, which was in the top 2% among wingers. However, this could also be because of the dominance of Pep Guardiola teams in the opposition third. Grealish attempted 5.84 dribbles per 90 at a success rate of 77.44%. 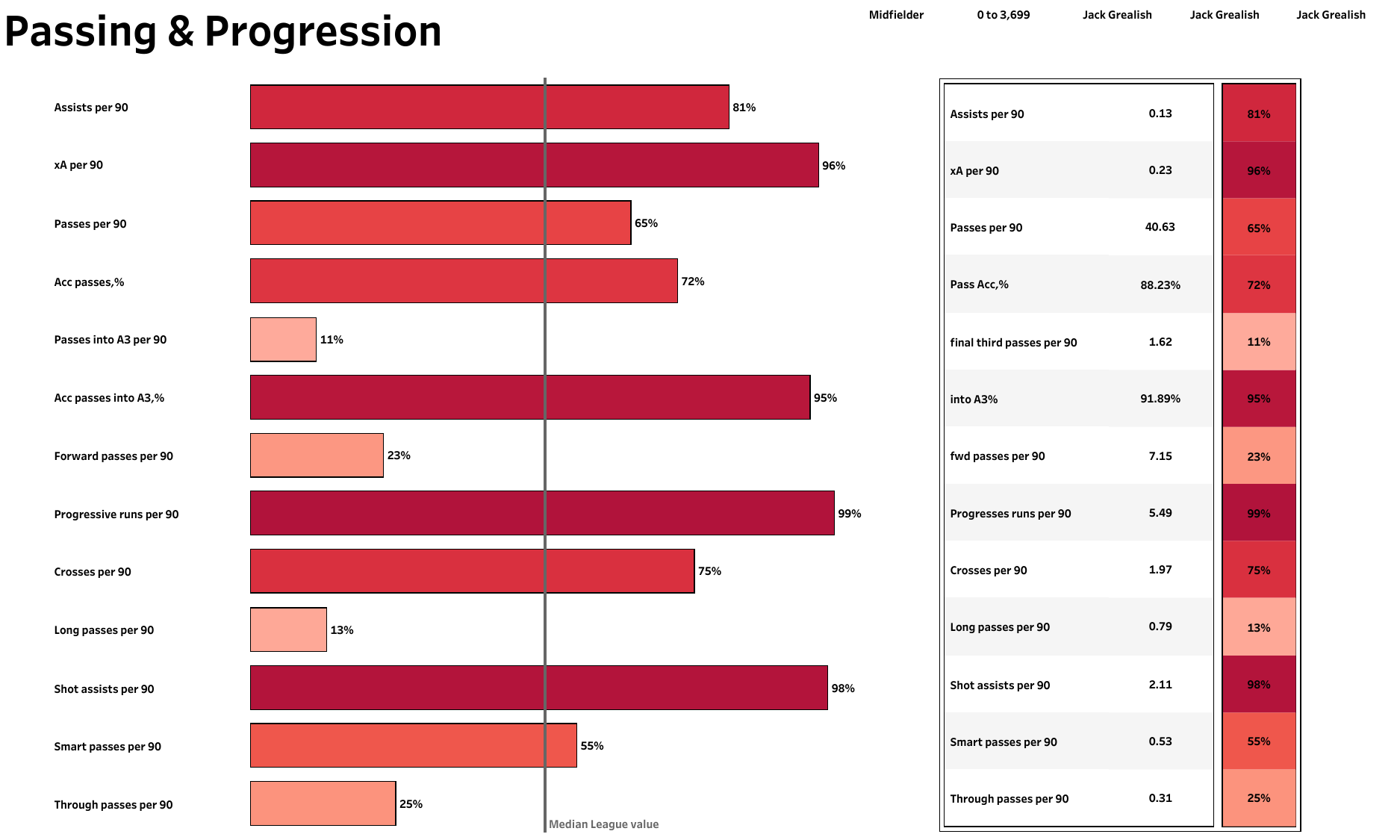 Grealish provided three assists for Manchester City in addition to scoring thrice. However, just like in goals, the 26-year-old underperformed when compared to xA, as he had 0.23 xA per 90 but only 0.13 assists per 90. The Englishman’s pass accuracy into the final third was nearly 92%, putting him in the top 5% among wingers. Grealish ranked in the 99th percentile for progressive runs made per 90, with 5.49 to his name. The former Aston Villa man also generated 2.11 shot assists per 90, which put him in the top 2% for wingers. 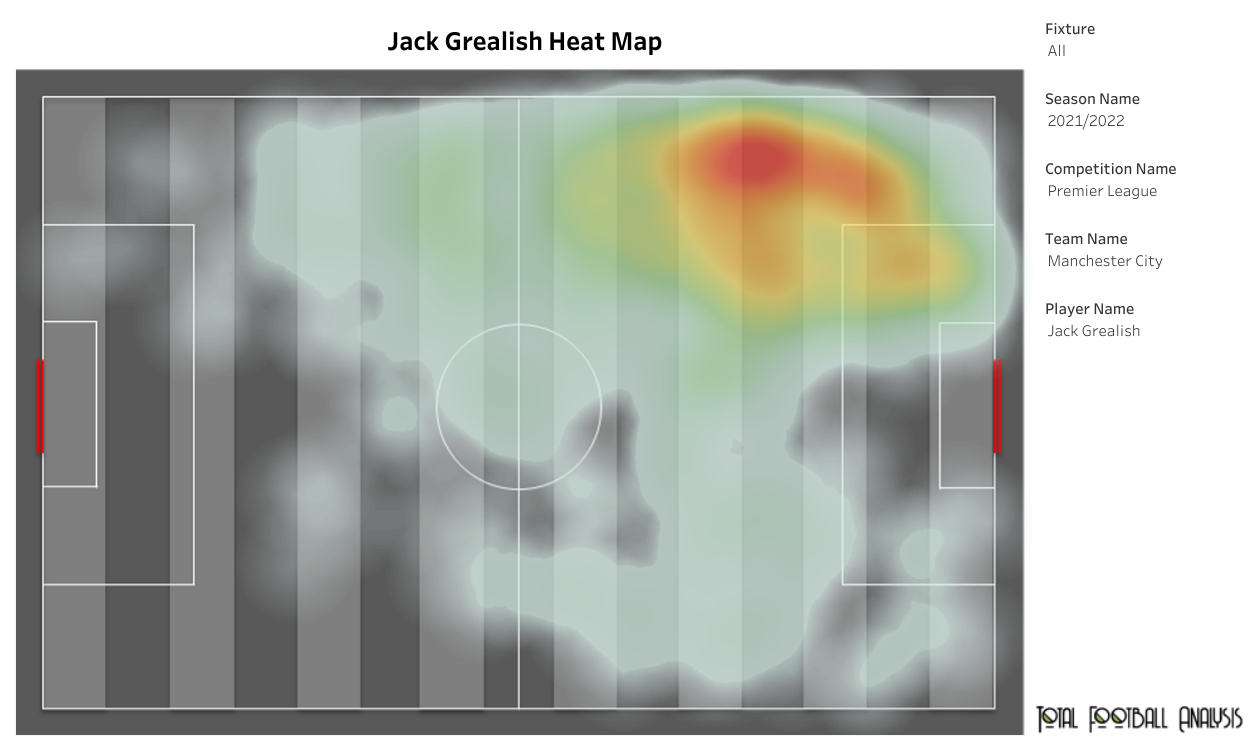 Given in the above visual is the heat map of Grealish. The 26-year-old was active on the left flank in the final third whenever he was on the pitch. He received 9.11 progressive passes per 90, completed 13.5 progressive carries per 90, 3.24 carries into the final third per 90 and an astonishing 4.13 carries into the opponents’ penalty area per 90, the latter of which ranked him at the top among the City regulars. In addition to this, Grealish worked fairly hard off the ball, attempting 12.6 pressures per 90 and 1.69 tackles and interceptions per 90.

If you exclude goals and assists, Jack Grealish has had a fairly solid debut campaign for Manchester City. However, goals and assists are the main statistics in football, and if you include them, one can only be disappointed with the 26-year-old, especially given his price tag. And if xG and xA are included, there is even more disappointment. City fans can only hope the Englishman gets better in the second season at the Etihad Stadium.

The post Under the microscope: Jack Grealish – A disappointing first season at Manchester City appeared first on Football analysis, news, betting and opinion from Man City.