Chelsea’s captain, César Azpilicueta, has been linked with a move to his home country’s club, Barcelona. Since the appointment of Xavi as their manager, Barcelona have set their eyes on the 32-year-old right-back. Xavi has been a keen admirer of Azpilicueta’s abilities and wants him in his team to win silverware next season. However, Chelsea have already let two of their key centre-backs leave the club. They have signed Kalidou Koulibaly from Napoli, but the player lacks English Premier League experience. Thomas Tuchel is also looking to block his captain’s move, and some of the stats from the last season show why the German manager is against selling Azpilicueta.

Azpilicueta joined the club in 2012 and has served the club for a decade. He has been a part of two English Premier League winning campaigns and has also lifted the UEFA Champions League trophy for Chelsea. The 32-year-old can play as a full-back, wing-back, or centre-back. He has played in 324 English Premier League matches. The Spanish international started his career in LaLiga and has played 99 matches in the Spanish top division for Osasuna. 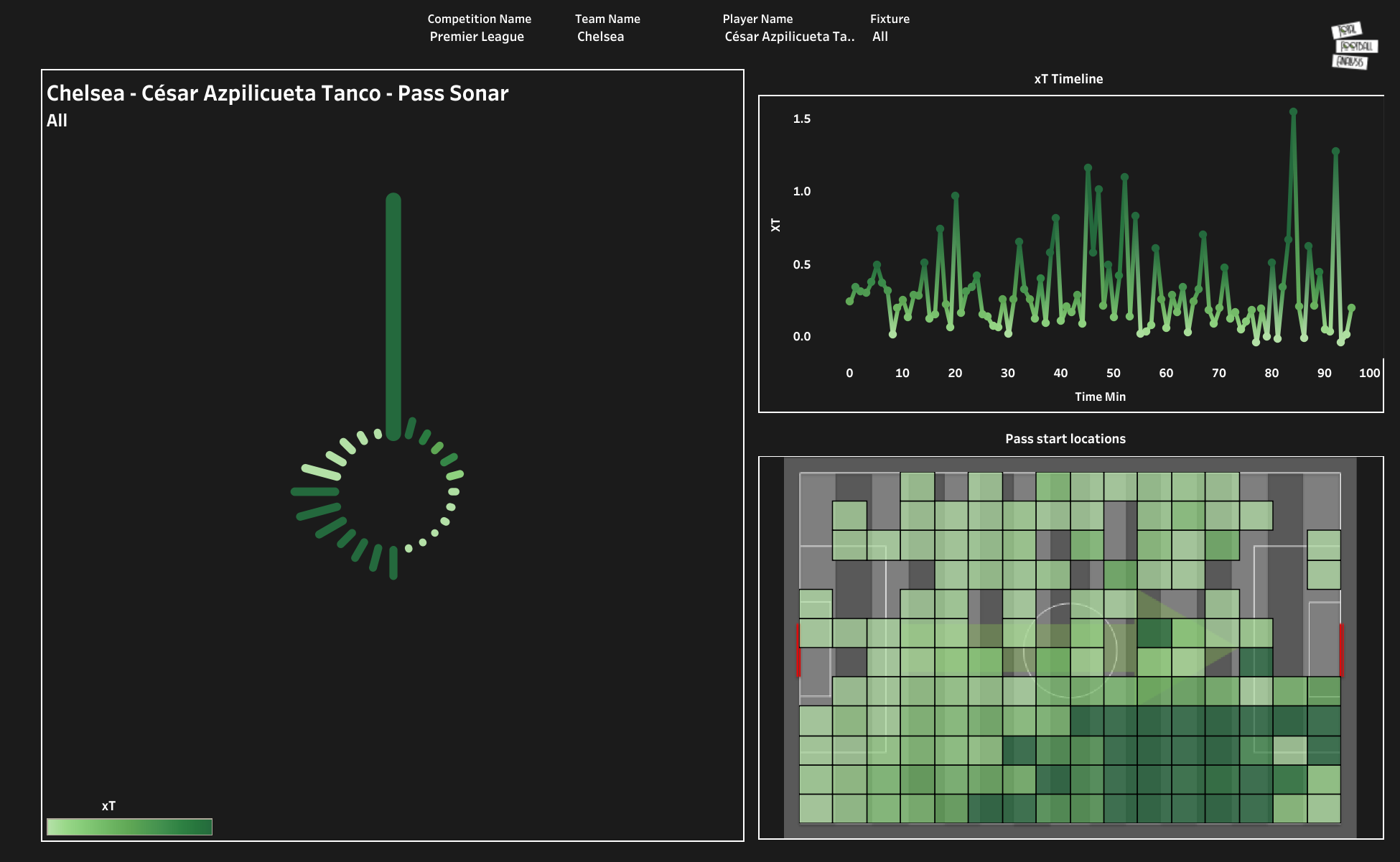 Last season, Azpilicueta made 27 appearances in the English Premier League. He scored a goal and also assisted twice. The above viz shows the pass start location and the threat created from passes at different time intervals. We can observe that Azpilicueta played a high line on the right side and created a lot of threats towards the end of the matches. 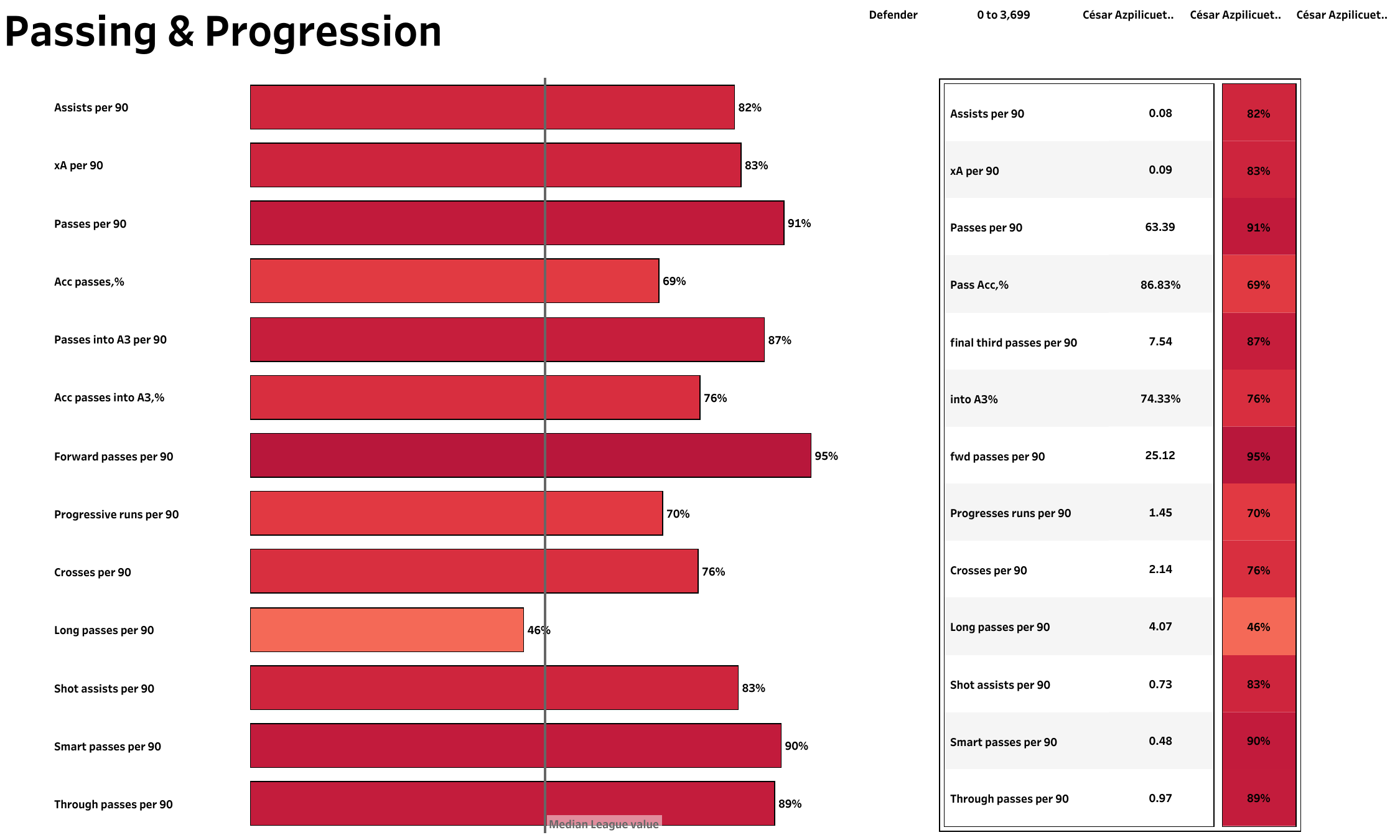 Azpilicueta’s passing stats were impressive as a defender. When looking at the above chart, the general rule is that the longer the bar, the better the performance — you can see the league average in the middle, and the % is the percentile rank the player is in. Chelsea’s captain averaged 63.4 passes per 90 minutes and had a high accuracy rate of 86.83%. The above viz shows that Azpilicueta was ranked high for attempting forward passes per 90 minutes. The full-back also showed variety in his passing by attempting more than two crosses and a through pass per 90 minutes. 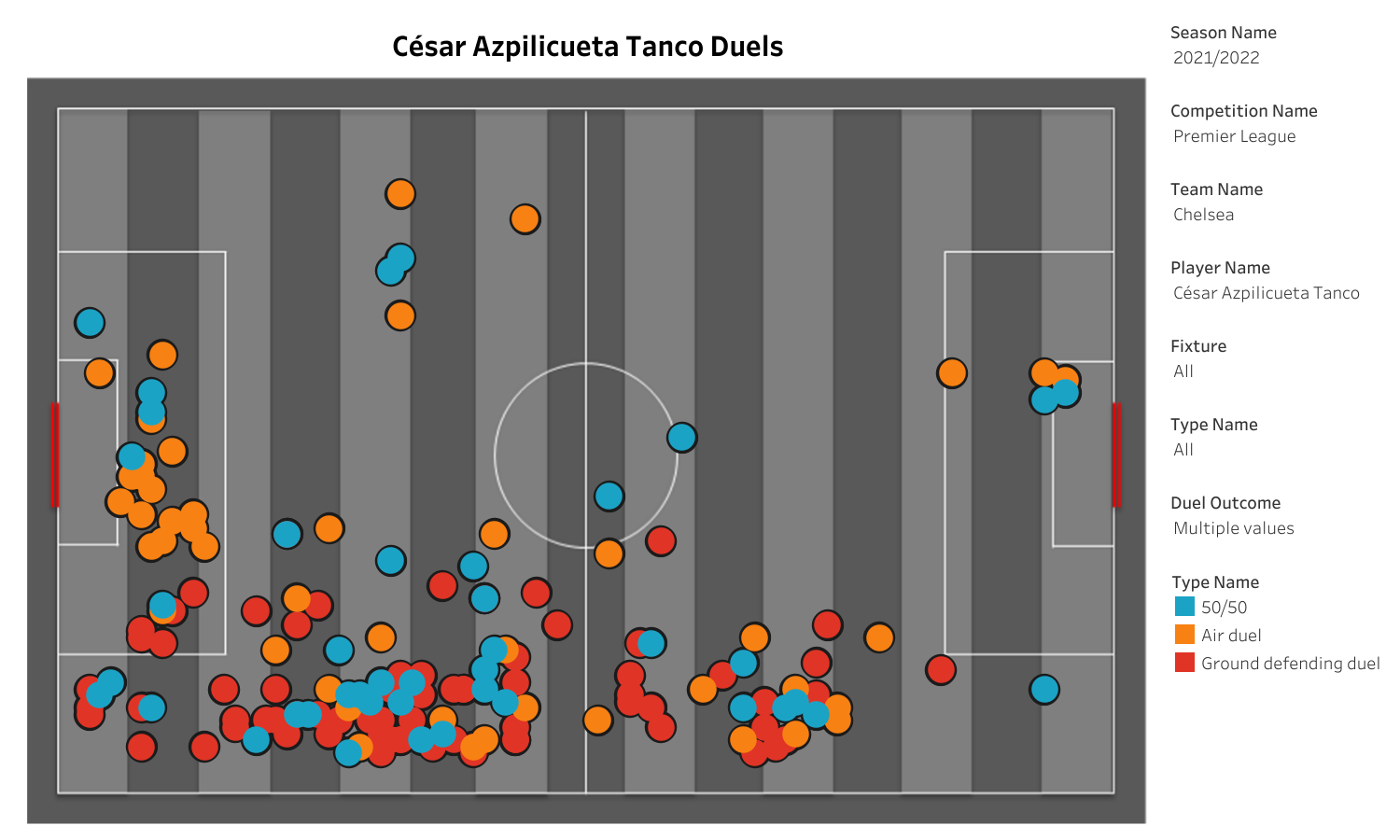 Chelsea played in a three-at-the-back formation and Azpilicueta always featured on the right, either as a full-back or as a centre-back. He was involved in 13.3 defensive actions with a success rate of 82.85%. The above viz shows all the duels that were won by the full-back. Azpilicueta won more than 50% of his aerial and loose ball duels. He also won 17.8% of defensive duels and was ranked high amongst other defenders. 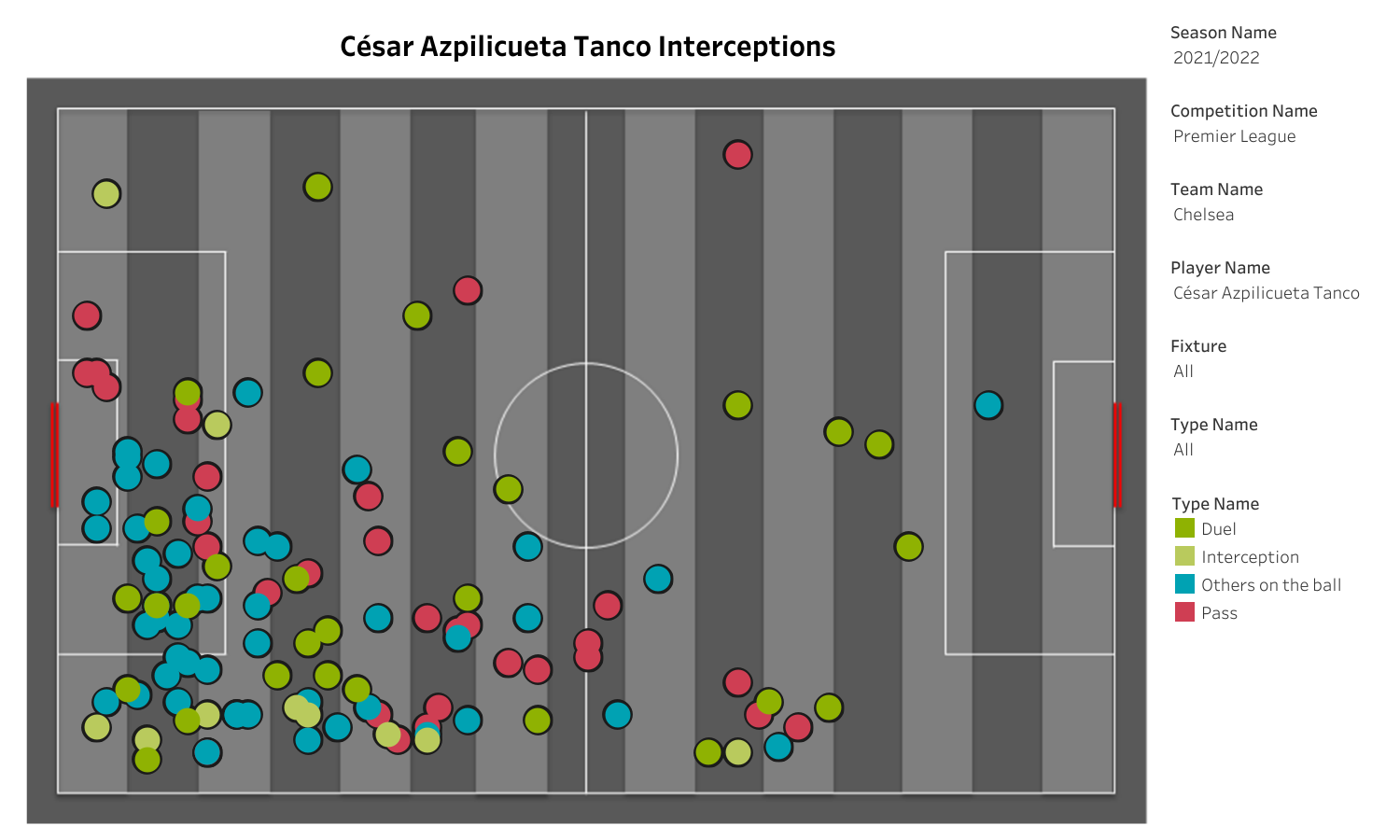 The Spanish player averaged 5.3 interceptions per 90 minutes and most of them were made in the defensive third. The above viz shows that Azpilicueta made most of the interceptions when other players were on the ball. Other than this, he averaged 10.5 recoveries, and 2.6 were made inside the opposition’s half.

César Azpilicueta is solid in defence and regarded as one of the best one-on-one defenders in the English Premier League in the past few seasons. He will be a key member in Thomas Tuchel’s side as the German manager looks to bring a trophy to the Bridge next season.

The post Under the microscope – Is Thomas Tuchel doing the right thing by blocking César Azpilicueta’s move to Barcelona? appeared first on Football analysis, news, betting and opinion from Chelsea.