Having signed Fabio Carvalho, Calvin Ramsay and Darwin Nunez from Fulham, Aberdeen and Benfica, respectively, Liverpool’s summer transfer business is almost done and finished. Despite the loss of Sadio Mane to Bayern Munich and the potential departure of Roberto Firmino, the Reds’ attacking department is stacked with the likes of Mohamed Salah, Darwin Nunez, Luis Diaz and Diogo Jota. All four are worthy of a starting spot in the front three, though only three of these will play at any given time. However, there could be one understudy to the quartet at Anfield this season, and it could be in the form of Harvey Elliott. 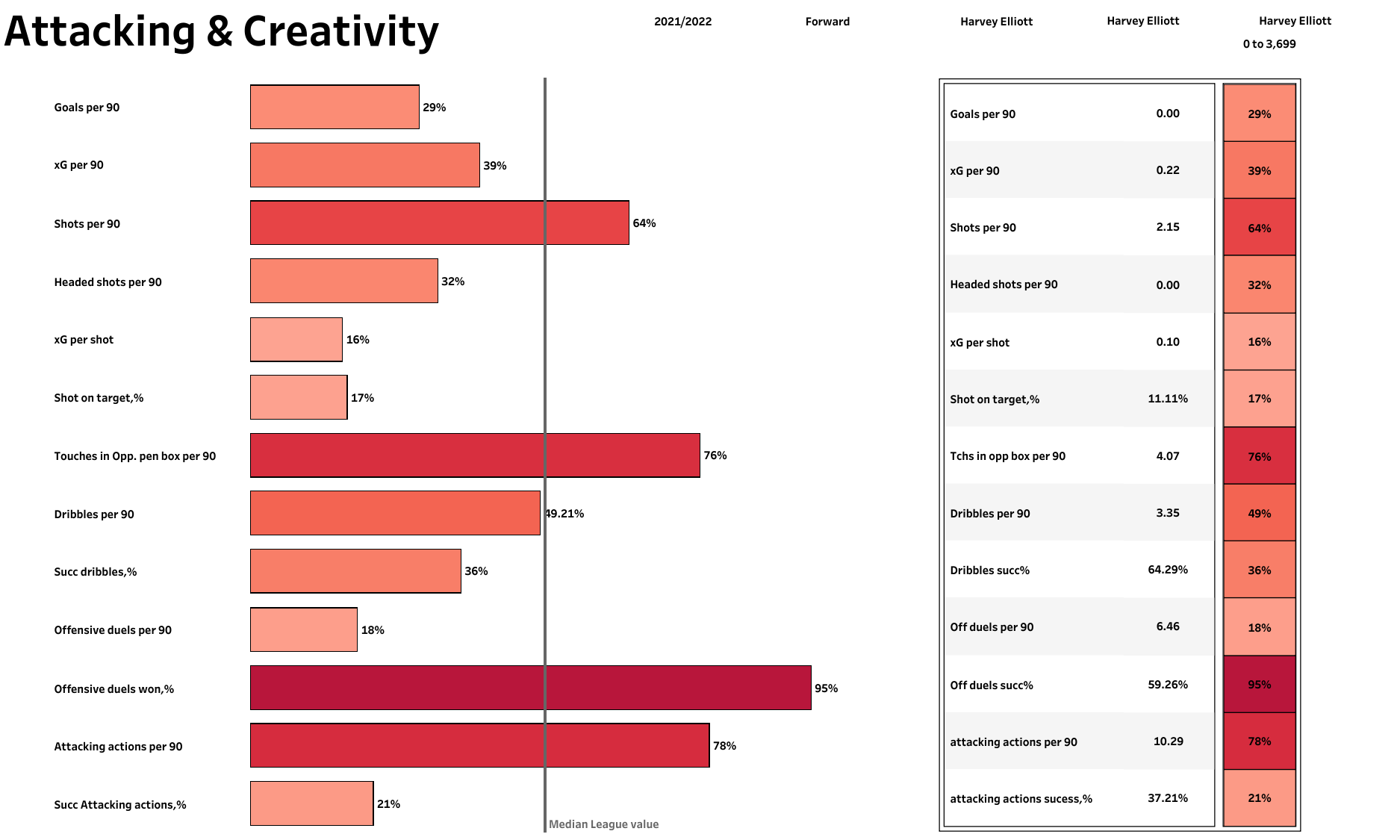 Elliott played in only 13 matches last season for Liverpool as he missed 140 days of action due to a serious ankle injury. He only played six games in the Premier League. Elliott did not score or assist even once in the league but generated an xG of 0.22, which is in the bottom 40% of forwards. He fired off 2.15 shots per 90, though his shooting accuracy was a woeful 11.11%. However, the Englishman won more than 59% of his offensive duels out of the 6.46 per 90 he competed. He also registered over four touches per 90 in the opponents’ penalty box per 90 and was involved in more than 10 attacking actions per 90. 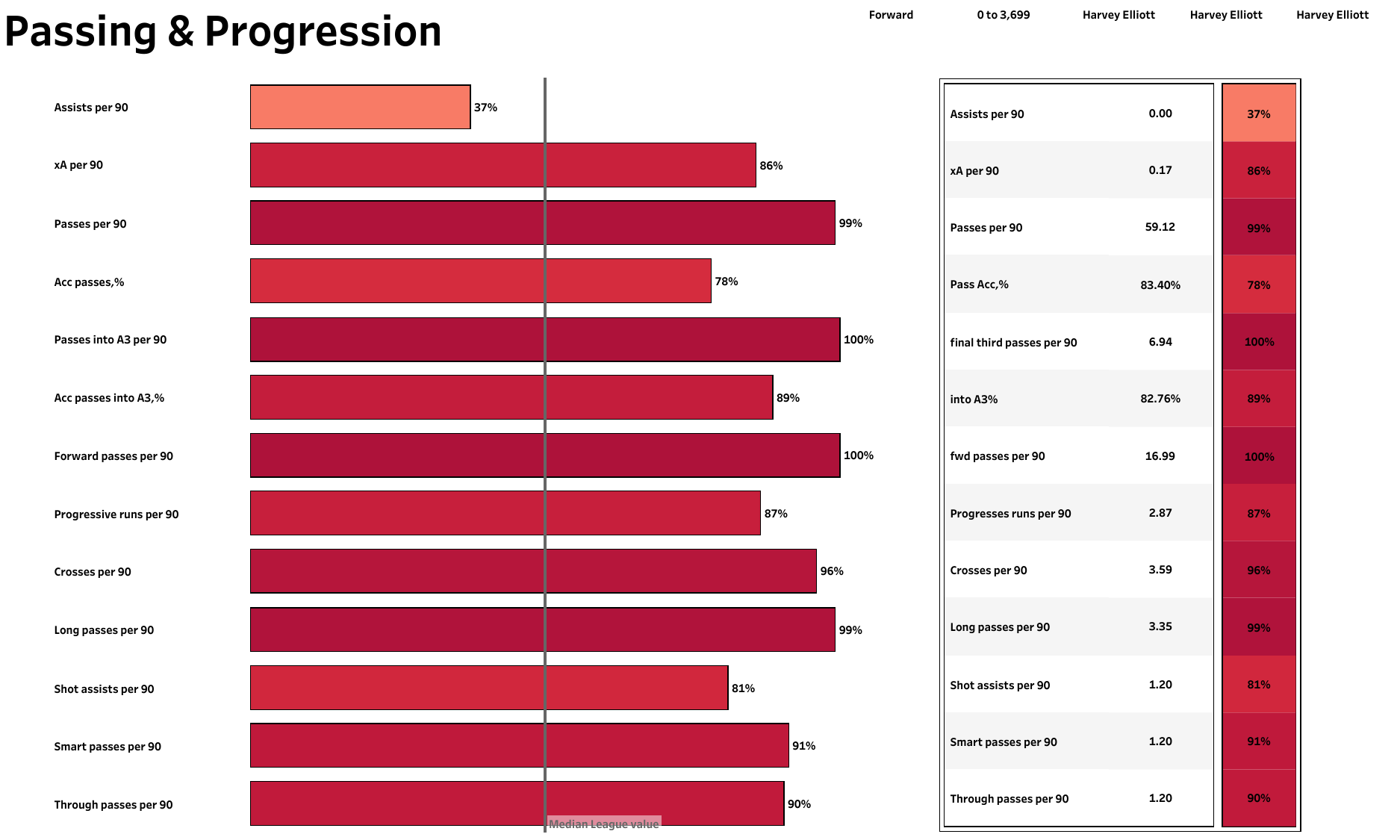 Elliott may not have provided an assist but he generated an xA per 90 of 0.17, which was good enough for the upper 14% of forwards. He was an active passer of the ball, attempting a whopping 60 passes per 90, which put him in the top 1% of forwards. The Englishman also attempted the most passes into the final third per 90, with nearly seven to his name, and he completed 82.7% of these passes. With 2.87 progressive runs per 90, he was placed in the top 13% of forwards. He delivered 3.6 crosses per 90 and 3.35 long balls per 90, ranking in the upper 4% or higher in both categories. With 1.2 smart passes and through balls per 90 each, he put himself in the upper decile in both categories. 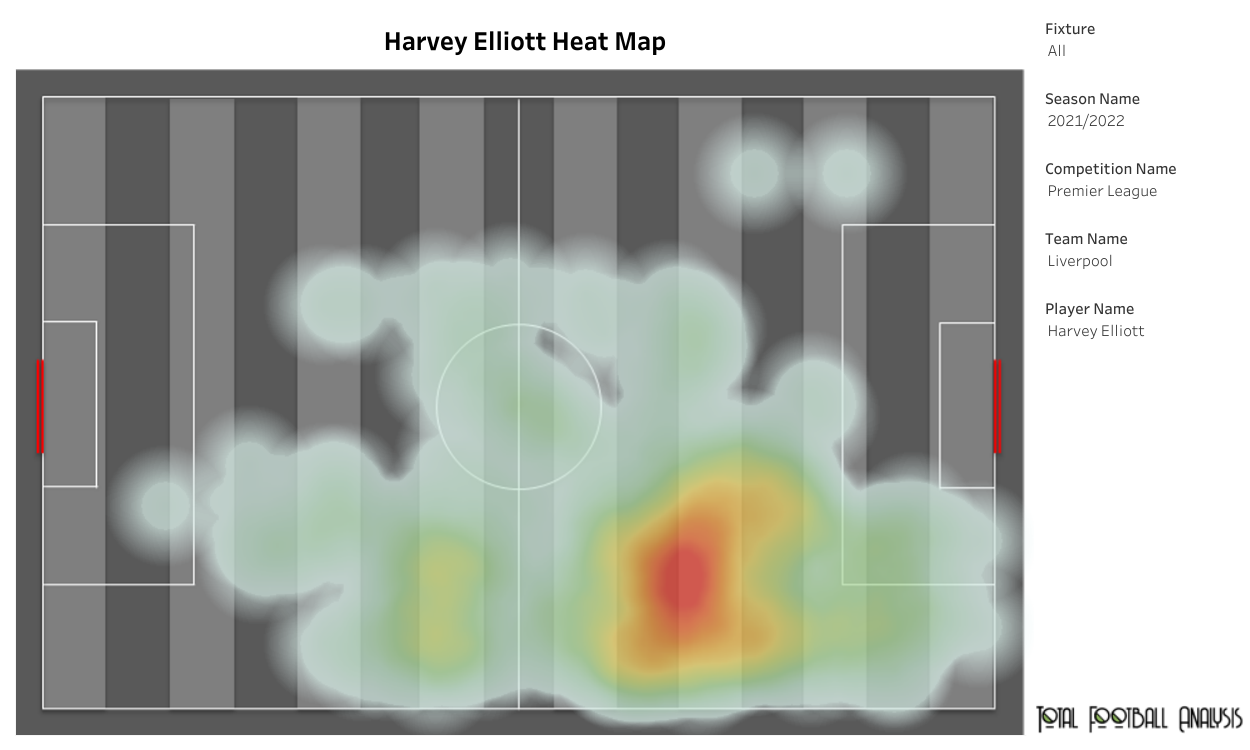 Elliott mostly featured on the right wing for Liverpool in his limited game-time prior to and after returning from the lengthy ankle injury. He completed an astonishing 8.95 progressive passes per 90, 6.32 balls into the attacking third per 90, 2.11 kay passes per 90 and 2.37 passes into the oppositions’ penalty area per 90. Additionally, the Englishman completed 10 progressive carries, nearly four carries into the final third per 90 and even received 8.68 progressive passes per 90. He put in a fair share of defensive work, making 5.5 successful pressures per 90 and 1.58 tackles and interceptions per 90.

With competition for a starting spot in the Liverpool XI, Harvey Elliott will have to make use of every opportunity he receives this season. Fortunately, with nearly 0.4 xG and xA combined per 90, the teenager could probably be the best substitute Jurgen Klopp could have hoped for this season.

The post Under the microscope: Harvey Elliott – Could the teenager be a useful option off the bench for Liverpool this season? appeared first on Football analysis, news, betting and opinion from Liverpool.