Arsenal have two promising youngsters who had a decent season in the English Premier League. These two players are Emile Smith-Rowe and Gabriel Martinelli. Both of them contributed well and helped their side to a fifth-place finish in the league table. However, Mikel Arteta faced a lot of problems in fitting them together in the starting XI. Both players featured on the left side for the Gunners. Martinelli is a wide-attacking forward, and Smith-Rowe is more of an attacking midfielder. Arteta had only one option: use both of these players at the same time. The manager gave game-time to both players, and here are some of the stats that show which player had an edge over the other. 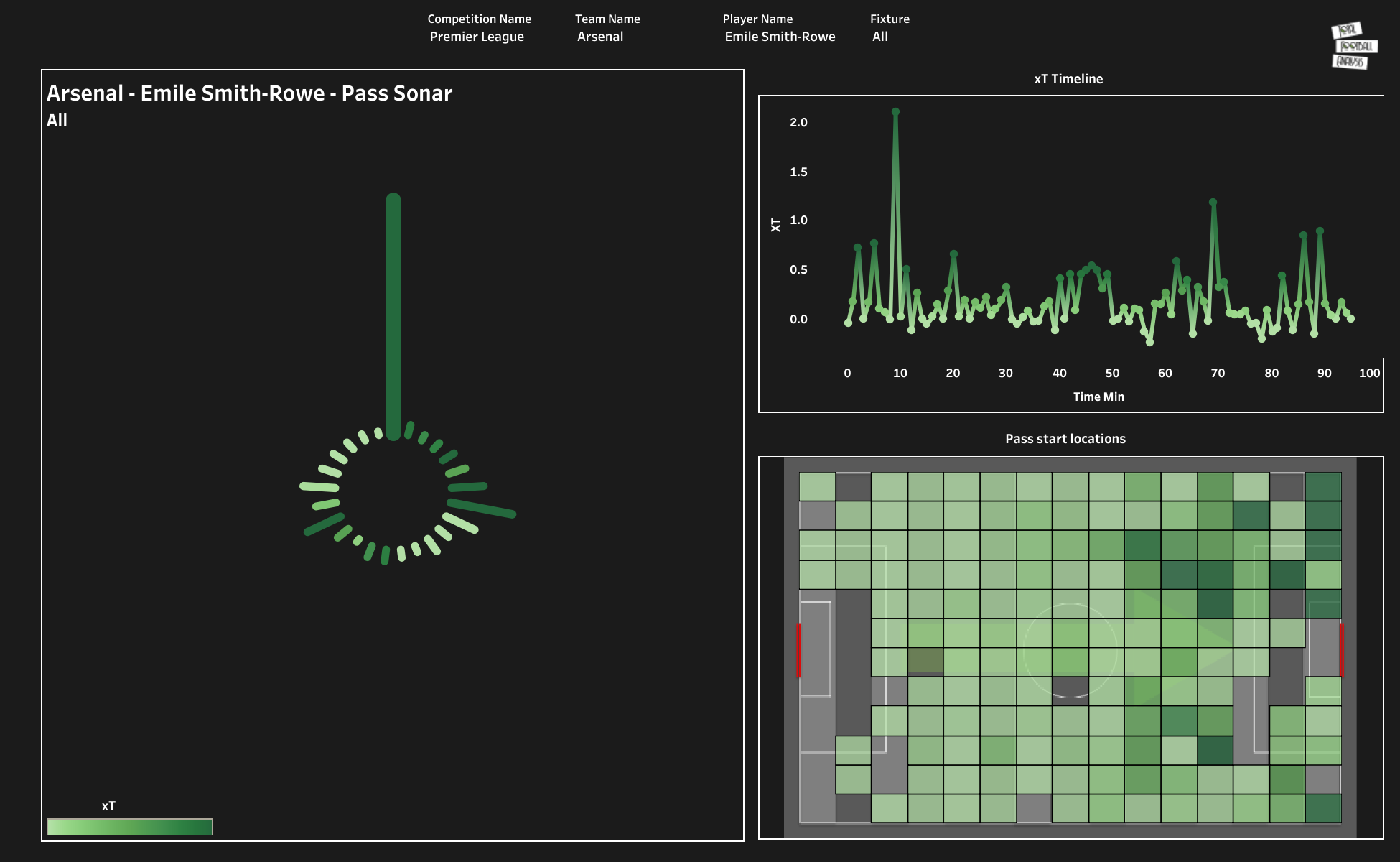 Smith-Rowe made 33 appearances for the Gunners in the league, and this included 21 starts. He scored ten goals past the opposition defence and provided two assists. The above viz shows the pass start location as well as the threat created from passes at different intervals. We can observe that Smith-Rowe likes to cut inside and attempt passes from the edge of the box like most playmakers do these days. He was very effective at the start of the match as he created the highest threats whenever the opposition were unsettled. 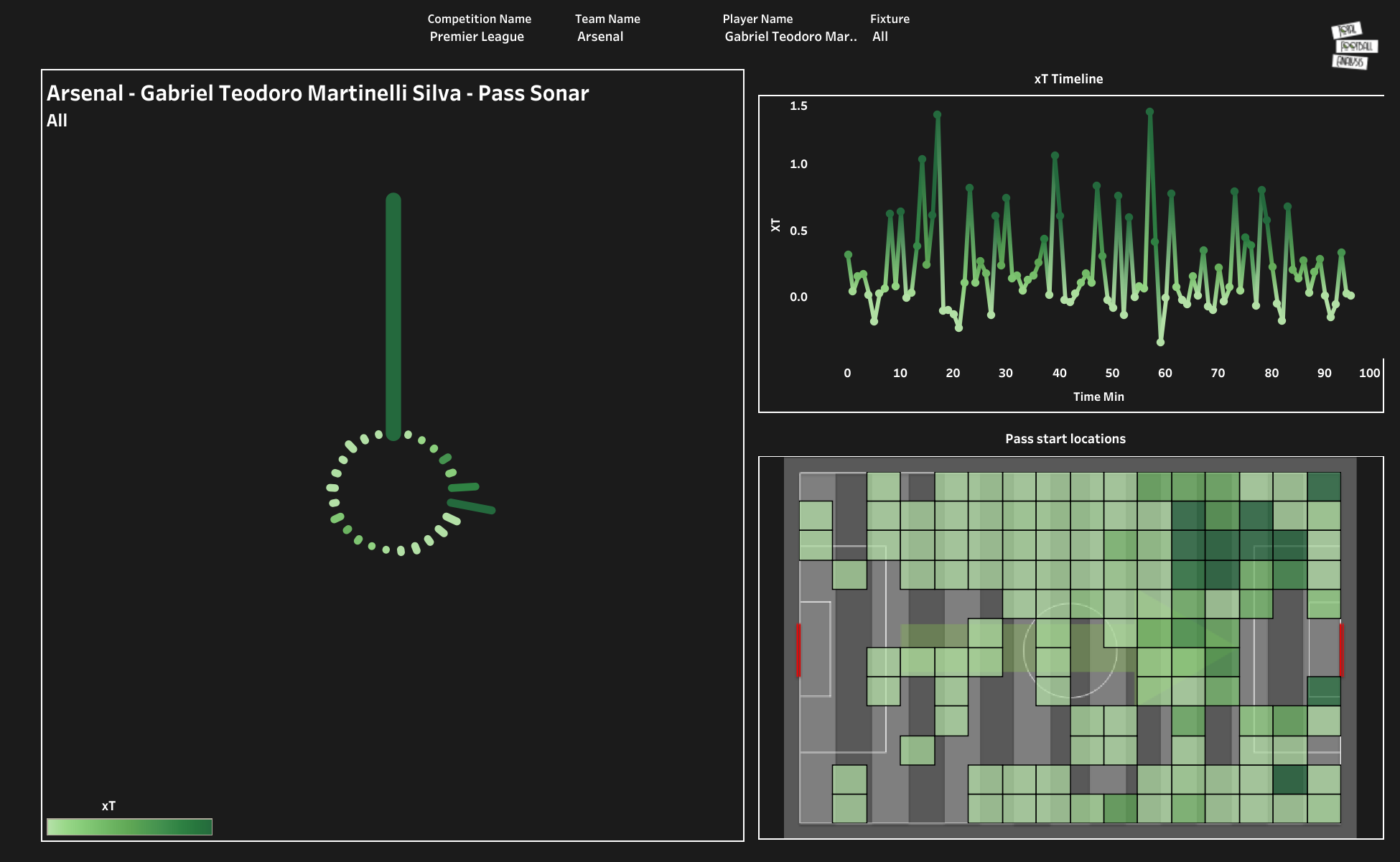 Martinelli, on the other hand, made 29 appearances, eight from the bench. He scored six goals and provided six assists in the league. The Brazilian mostly played wide and stretched the opposition defence. He plays differently than Smith-Rowe. The player created threats at different intervals. This also hints that Martinelli was dangerous with the ball at his feet. 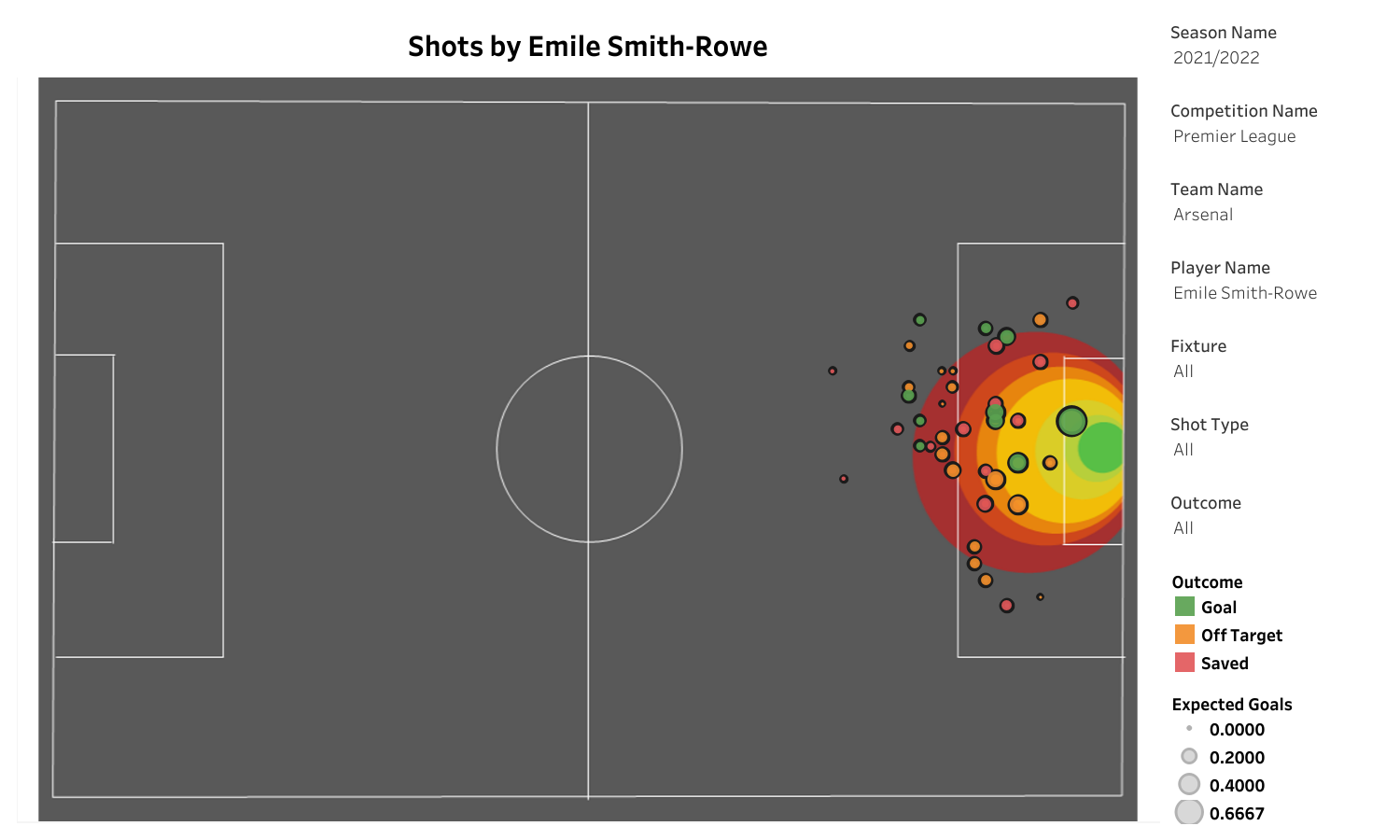 The above viz is the shot map of Smith-Rowe. He averaged 1.72 shots per 90 minutes and had an overall shot accuracy rate of 40%. From the above viz, we can observe that Smith-Rowe likes to come towards the centre and attempt his shots. He is more confident whenever he can clearly see the goal. Smith-Rowe struggled to score goals in the second half of the season and only managed to beat the opposition keeper twice. 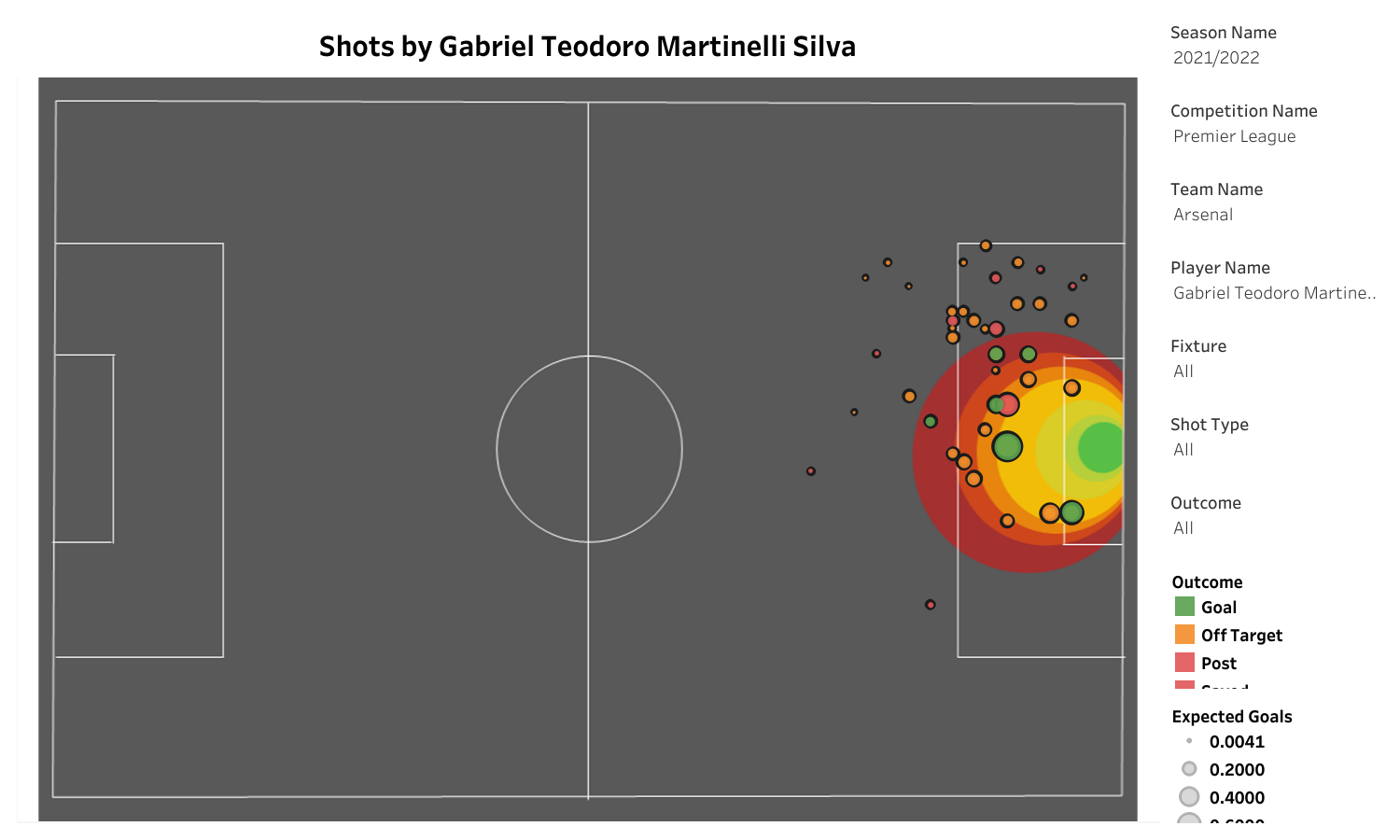 Martinelli averaged 1.9 shots per 90 minutes with a 30.23% shot accuracy rate. His shot map is different from Smith-Rowe’s shot map, mainly because most of the shots have been attempted from the left side. Martinelli likes to cut inside from wide positions and attempt his shots. 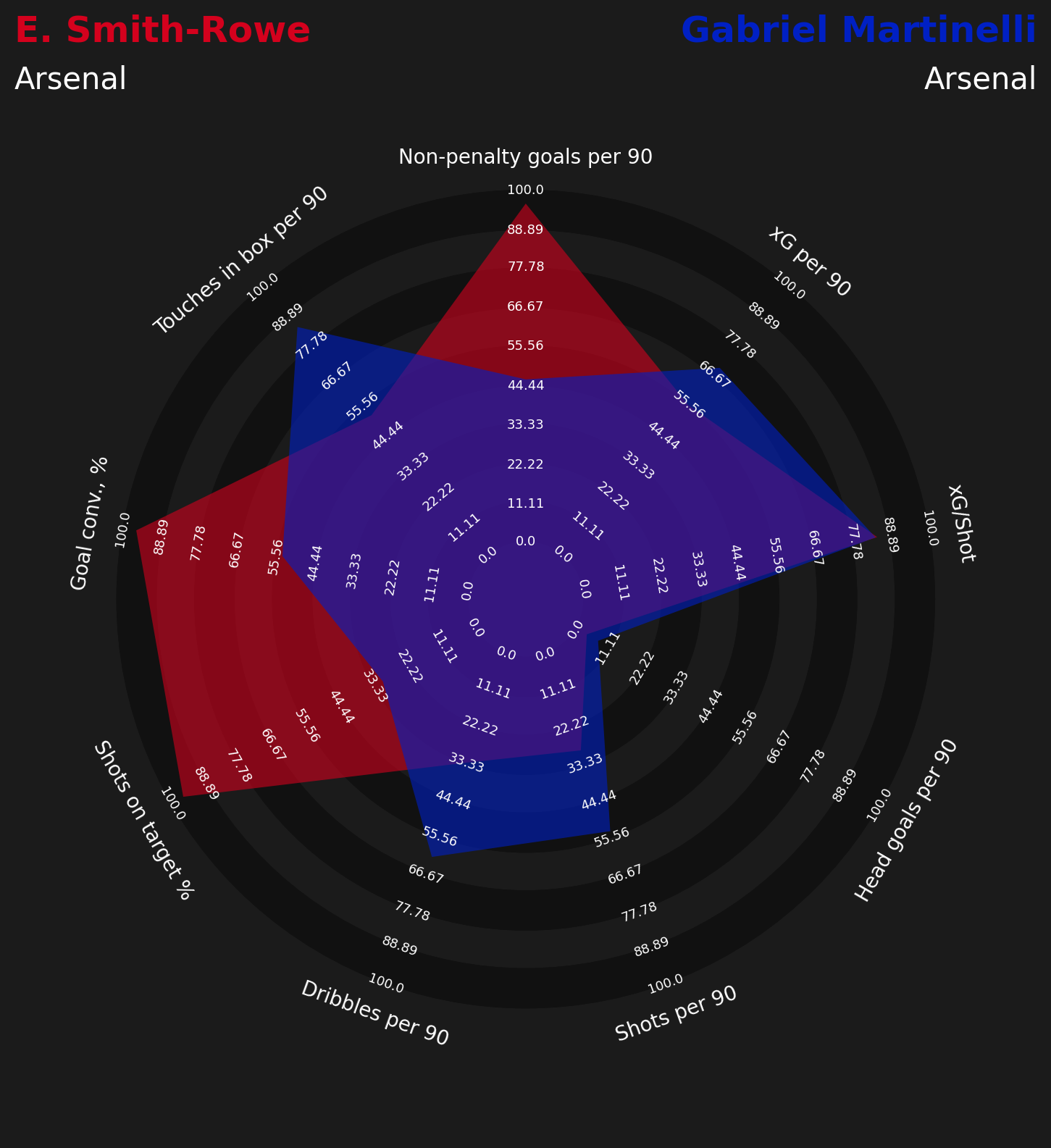 The above viz compares some of the attacking stats of both players. It can be noted that Smith-Rowe had a better shot conversion rate than his teammate and also had more shots on target. However, Martinelli attempted more shots and dribbles than Smith-Rowe. He also had a higher xG rate.

Gabriel Martinelli has better attacking stats than his teammates. He is a threat with the ball at his feet and always troubles the opposition defence. Emile Smith-Rowe is more of a calm and composed player who likes to take different positions and wait for opportunities to score goals. This season, Martinelli edged over his teammates, despite scoring fewer goals. Mikel Arteta will look to make a few formation changes and adjust these two together in the same lineup as he did in some of the games.

The post Under the microscope: Gabriel Martinelli & Emile Smith-Rowe – Who was the most effective player on the left wing for Arsenal? appeared first on Football analysis, news, betting and opinion from Arsenal.