With the absence of a striker at Manchester City, Phil Foden has been Guardiola’s closest option to an out-and-out striker. The young Englishman is playing as a false nine in Pep Guardiola’s 4-3-3 since the beginning of the season.

For the last two years, Guardiola has been searching for someone to fit that role, partially forced by Manchester City’s failure to recruit a proper number nine. Guardiola has tried many players in the position – Ferran Torres, Raheem Sterling, and Jack Grealish, to name a few, but none have mastered the position as much as Foden, and his performance in the Manchester derby showed everything Guardiola wants from a player in that position. Starting between the two wide forwards, the 21-year-old is allowed the freedom to showcase his talent. He drops deep at times, makes great runs in behind, and his link-up play creates countless opportunities. 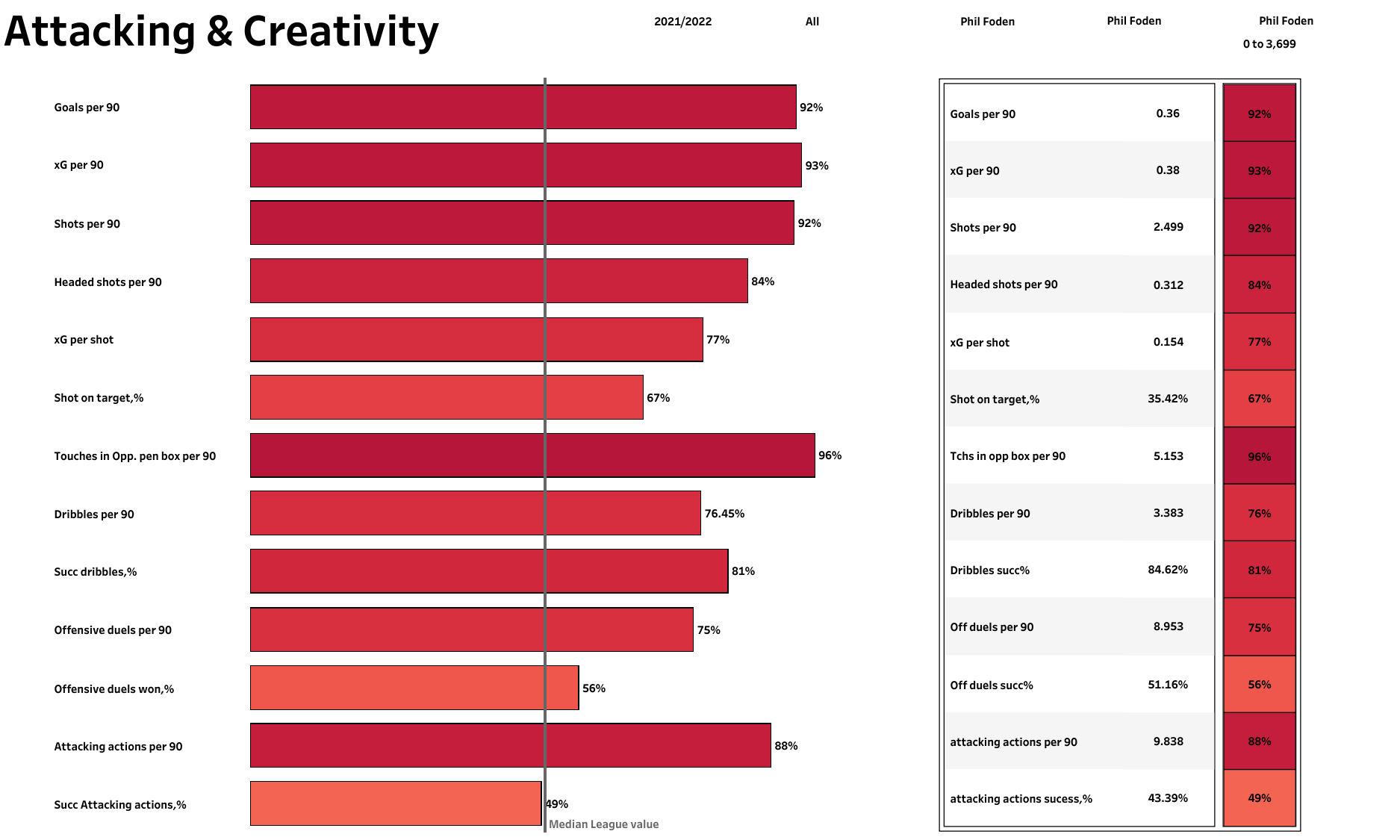 The above visual shows us the attacking and creativity stats for Phil Foden in the 2021-22 season. Phil Foden has scored 10 goals so far in the season in all competitions and has also registered eight assists. This indicates how influential he has been in the false nine position as a goalscorer as well as a playmaker. Foden has 0.36 goals per 90 and averages an xG of 0.38 per 90 minutes. He ranks highly for the number of touches inside the opposition box and has completed 84% of his dribbles. Foden is a player with great close control and can get out of tight spaces if pressed by the opposition players. These attributes make him the perfect fit for the position. He has also attempted 9.838 attacking actions per 90 minutes and has completed 43.39% of these actions. 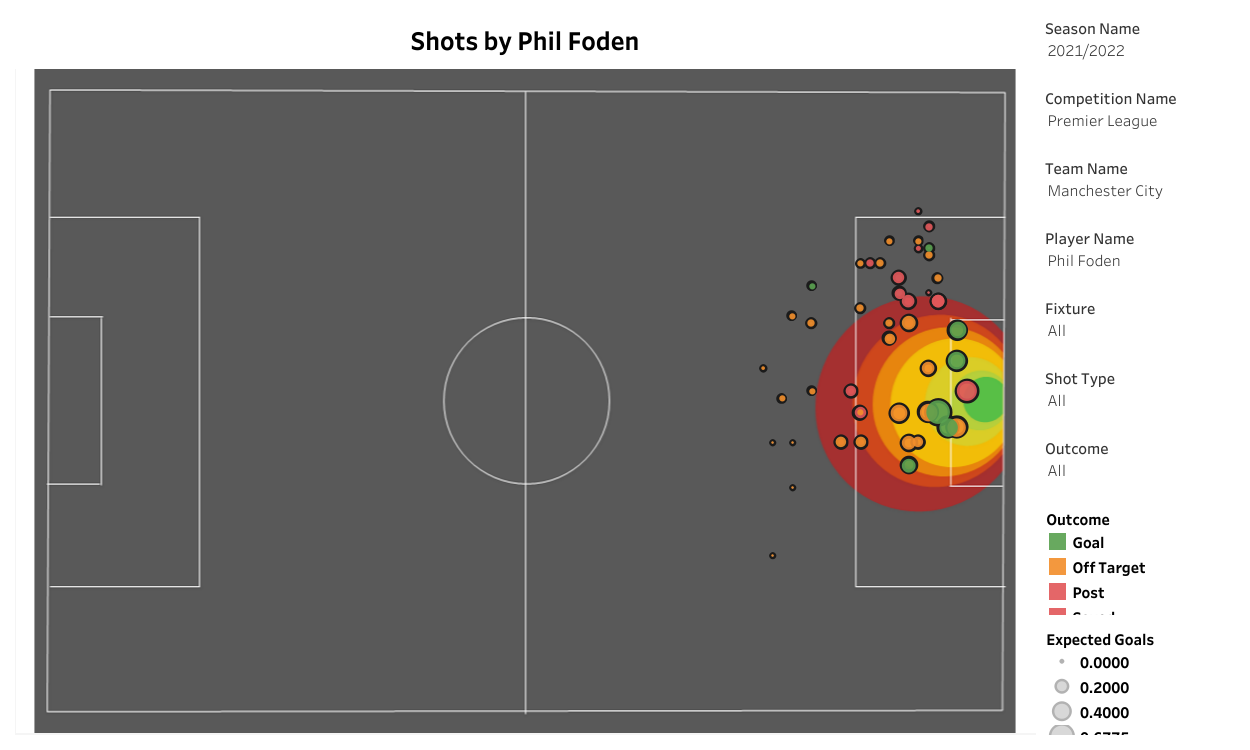 Although Phil Foden is more of a creator and likes to keep possession of the ball near the wider areas, playing in the false nine position gives him more freedom to attack the opposition’s goal. Foden has had a high number of shots on goal from the left flank, but he also has plenty of attempts on goal from the centre of the pitch. Foden has 48 shots on goal so far with 35.42% of his shots on target. 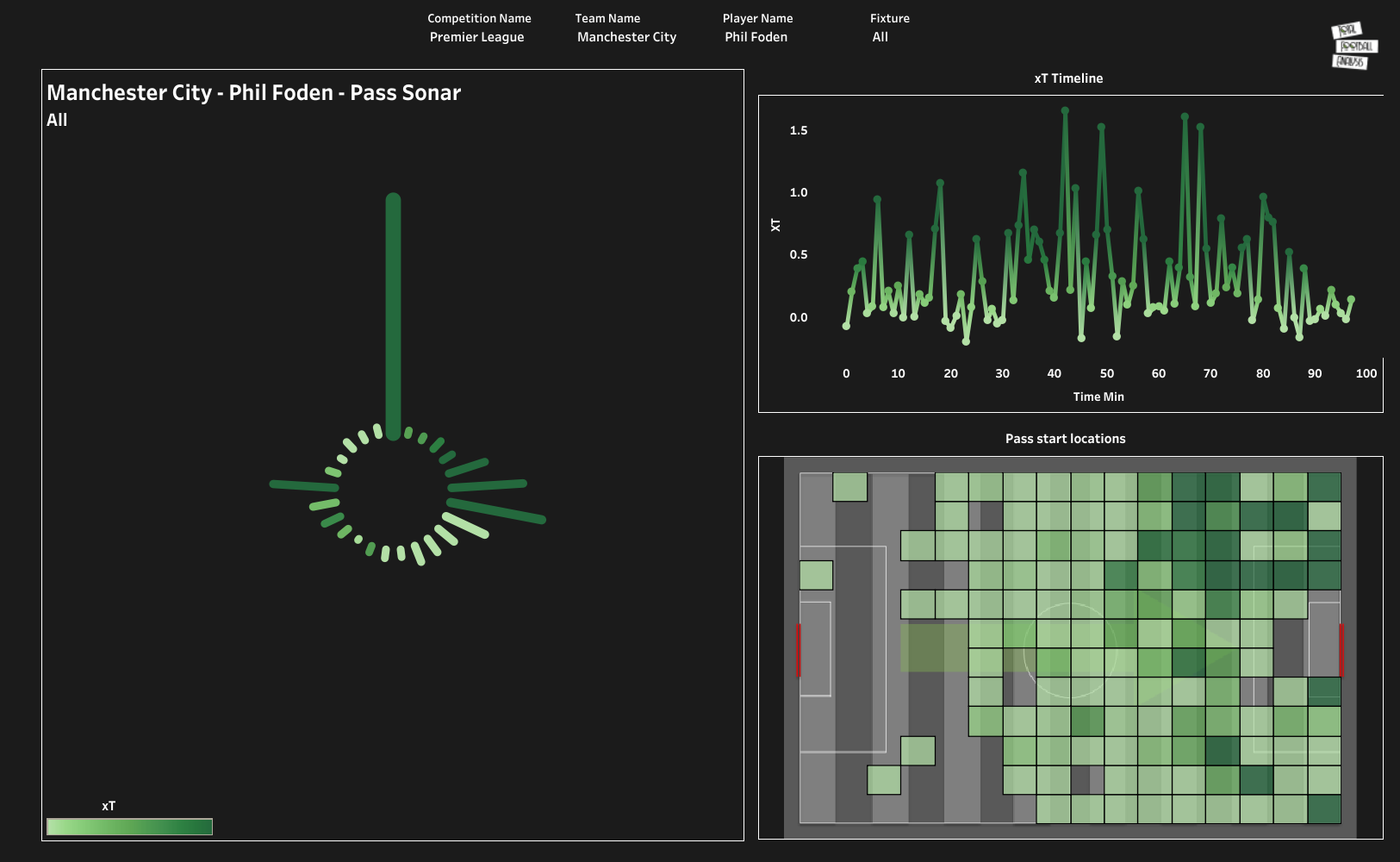 As seen in the above visual, Foden has attempted passes throughout the field, which indicates that he has played in several positions and has more of a free role given to him by the manager. Foden has attempted more passes into the penalty area from the left flank, and these passes have had a higher xT than the passes played from the right flank. As Foden is a left-footed player, it is easier for him to dribble past players on the left flank and put in a cross with his preferred foot. The xT timeline indicates that he is a huge threat throughout the game whenever he gets the ball. The pass sonar indicates that the majority of his passes are forward passes into the final third.

The versatility of Foden gives Pep Guardiola more depth to his squad as Foden can adjust to any position in the front line. Guardiola has shuffled his front line a lot this season, but Foden has shown time and again that he is the man for the position and the most capable player to operate in the false nine role in the squad.