Tottenham’s form has been a roller coaster since the start of the year. After the arrival of Antonio Conte, Spurs were defeated only once in their first 11 matches under the Italian manager. Their form had taken Spurs strongly into top-four contention and the League Cup semi-finals. However, since the loss against Watford at the turn of the year, Spurs have been struggling for form. In the 12 games since the victory over Watford, Spurs have tasted defeat seven times across three competitions. In addition, they have crashed out of two cups. With five wins opposite those seven defeats, Tottenham have picked up less than 50% points.

Although there have been some impressive wins, such as the win against Manchester City, Leeds, and recently Everton, there have been some underwhelming losses as well, case in point, against Burnley and Middlesbrough. Amidst the inconsistent displays, Conte has shuffled his starting XI in multiple areas of the pitch. However, there is one area where Conte seems to have finally settled, and that is the defense.

While Eric Dier and Ben Davies have been two defenders to have featured regularly under Conte, Cristian Romero has been slotted as the third centre-back in Conte’s three-man defense following his return from injury. With the three defenders playing together, Spurs have lost three in five league games. Although the chemistry among the defenders is still taking shape, Conte has managed to settle on his preferred three-man defense for now.

Let’s take a look at some stats to gauge the performances of Dier, Davies, and Romero. 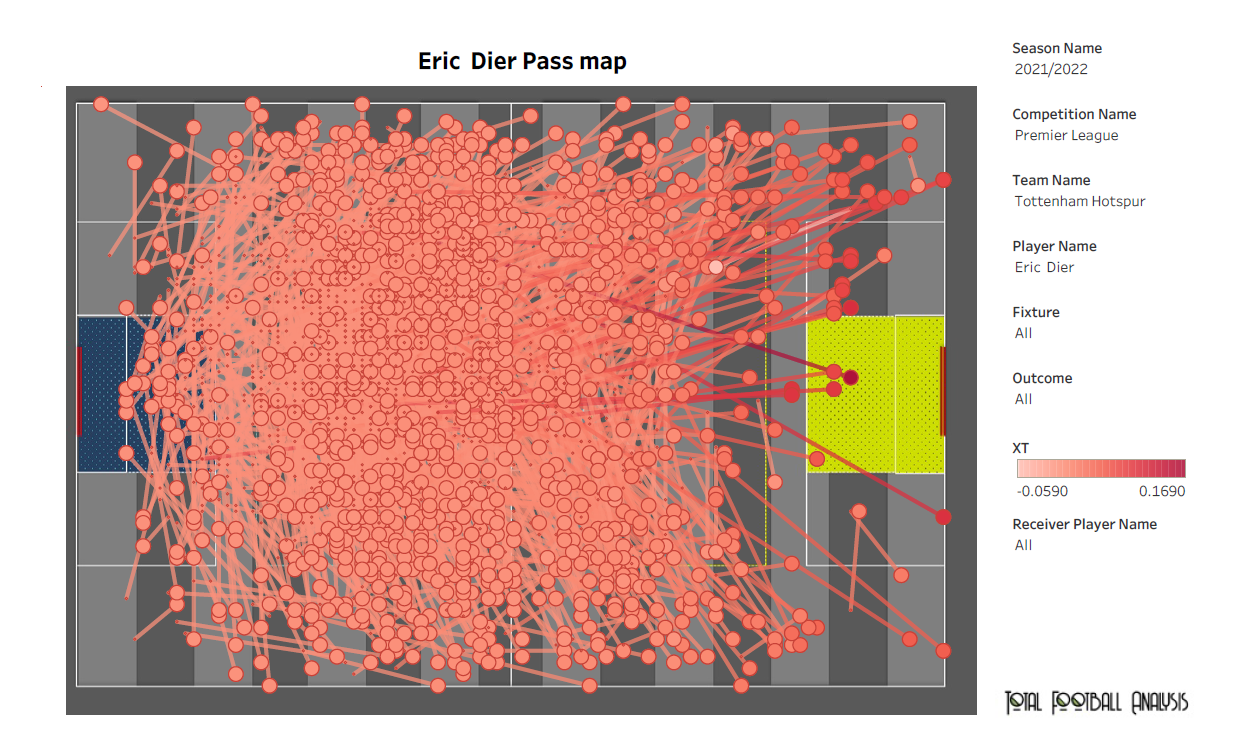 In the above viz., we can see the locations of the pitch where Dier has delivered his passes. Dier possesses an impressive range of passing. His pass map also displays the different array of passes that he has attempted this season. Dier is adept at distributing the ball through his long-range passing. He has managed a consistent level of performance in the recent games as well. In the 5-0 thrashing of Everton, Dier had yet another composed display at the back. With one tackle, three clearances, and two blocked shots, Dier was impressive. He also kept track of Dominic Calvert-Lewin and was rarely troubled. The above viz. also shows Dier’s threatening passes into the box. 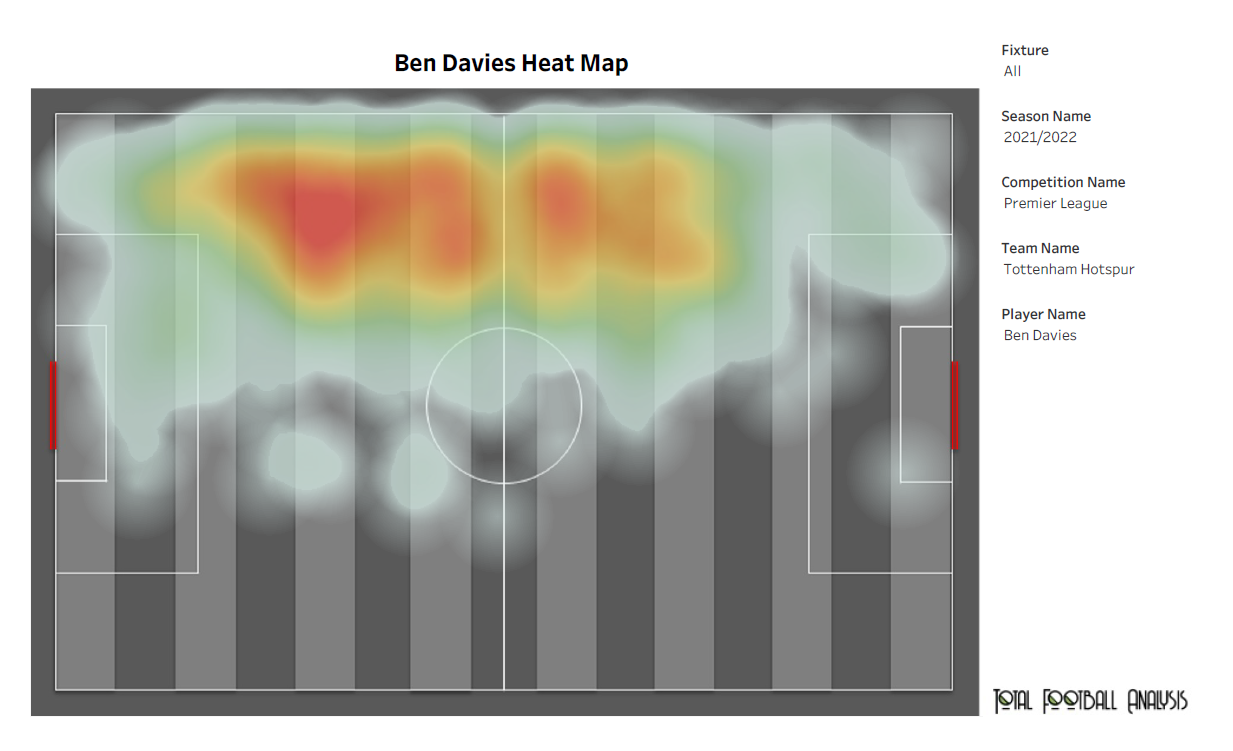 The above viz. highlights the areas of the pitch where Davies is most active. We can see the defenders’ movement and work rate. Davies has demonstrated his positional intelligence and has been impressive with his positions. In addition to his defensive responsibilities, Davies has been seen making forward runs into the box when Spurs attack. He darts into the half-spaces that open up for him when the opponent defender is busy marking Tottenham’s wide players. Davies is an important part of the build-up phases of the attack while also remaining a key element when Spurs counter. 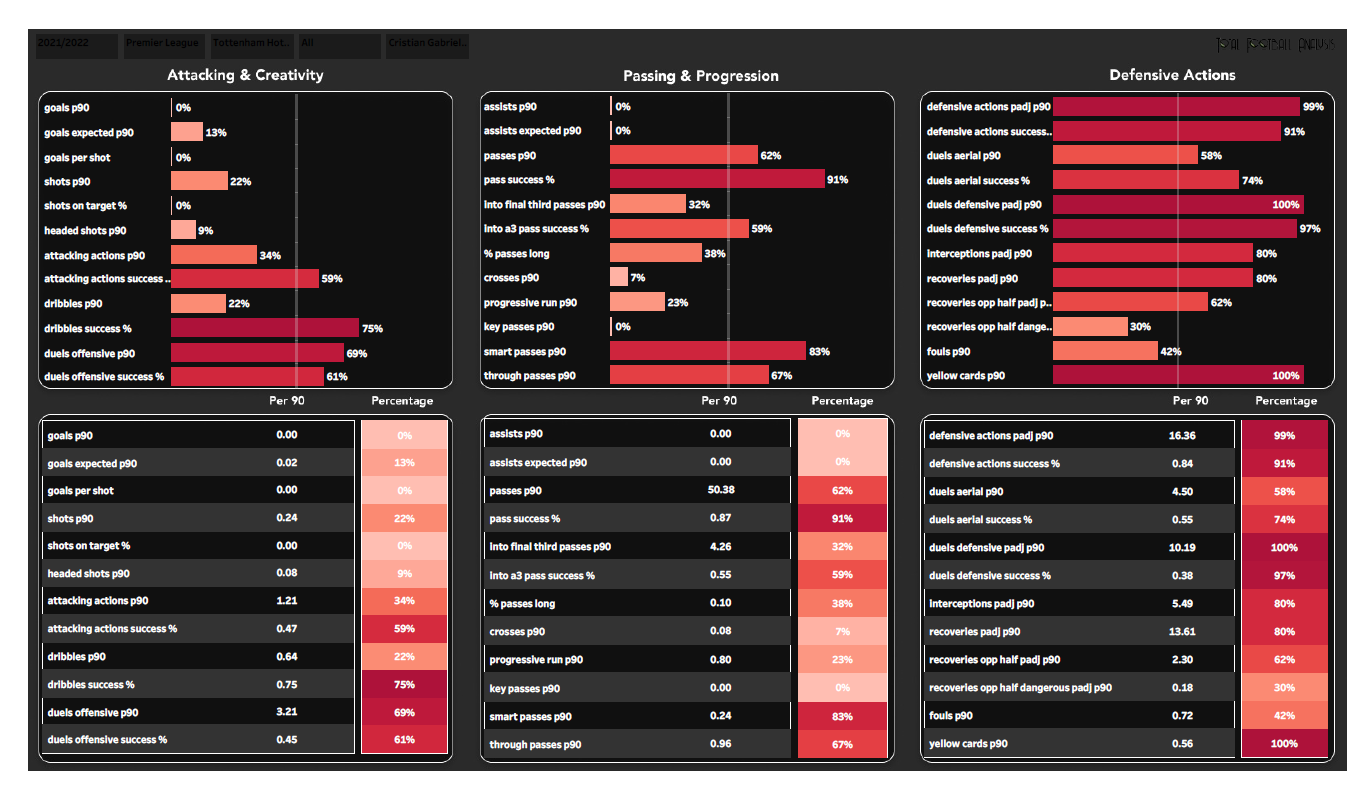 In the above viz., we can see Romero’s overall stats in the Premier League. Romero is a physical and athletic defender who possesses strong awareness. His awareness allows him to read and intercept the opponent’s play. He is adept at ball recovery and breaking up the play. However, Romero, at times, leaves his position open. His tendency to drift towards the left exposes other areas of the defense. We can see that he has fared well in terms of the majority of defensive stats.

While it is not perfect, Spurs’ backline has displayed strong performances at the back. For now, Conte has settled his three-man defense.

The post Under the microscope: Dier, Davies and Romero – Conte’s backline has finally taken shape appeared first on Football analysis, news, betting and opinion from Spurs.