Leicester City’s underwhelming defensive display has been at the forefront of their struggles this season. The Foxes have struggled to sort out their defense, and as a result, they have conceded 43 goals in the Premier League this season. However, Brendan Rodgers’ side have shown some positive signs in their recent matches. Since the 1-2 defeat against Wolves last month, the Foxes have conceded just once in four matches, and the 27-year-old Ghanian defender, Daniel Amartey, has been a key part of Leicester’s improved defensive showings in recent weeks.

Amartey, who was on the fringes of Leicester’s squad for over three seasons, has been one of Rodgers’ most trusted defenders this campaign. Amidst the injuries and inconsistent performances, the 27-year-old has found himself regularly in the Foxes’ starting lineup. He has made 16 appearances in the Premier League this season and has become a regular starter for Brendan Rodgers’ side, more specifically since the turn of the year.

The versatile defender joined Leicester from FC Copenhagen. Since making his move to the King Power Stadium, Amartey has found it difficult to nail his spot in the starting lineup. However, his performances this season could put him in contention for more game time in the upcoming matches, as Leicester prepare for the long-awaited return of Wesley Fofana after a long spell on the sidelines due to injury.

Let’s take a look at some stats to gauge Amartey’s performances for the Foxes this season. 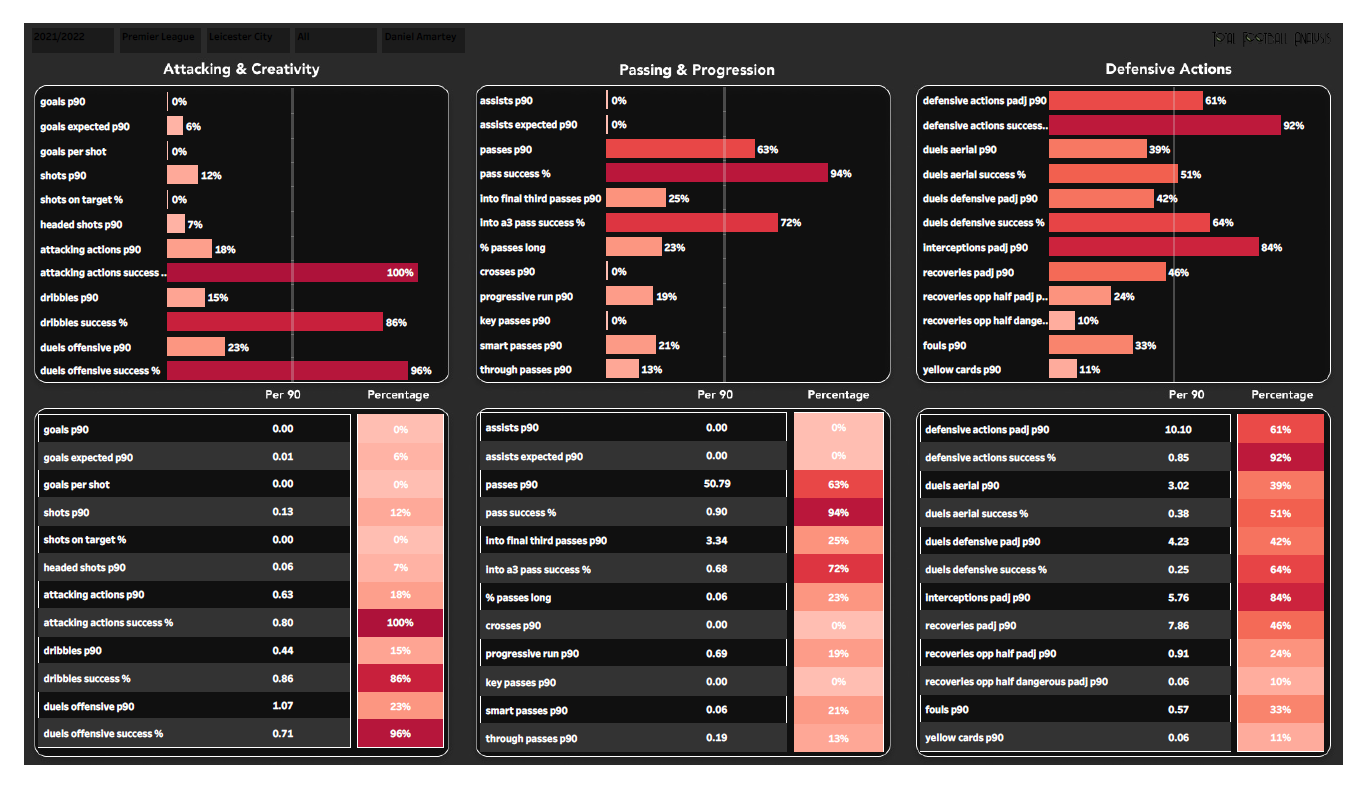 The above viz. displays Amartey’s overall stats in the Premier League this season. His defensive stats are decent, with the most notable defensive stats being defensive actions success rate and interceptions per 90. The Ghanian defender ranks in the 94th percentile in terms of passing, which indicates his high success rate in passing. Amartey is a tenacious defender, whose passing ability stands out. He is robust on and off the ball and remains assured in possession. His game intelligence allows him to consistently sniff out threats to his defense. In Leicester’s away win at Burnley at the start of the month, Amartey performed remarkably, containing both Weghorst and Cornet, showcasing good positioning and tenacity. 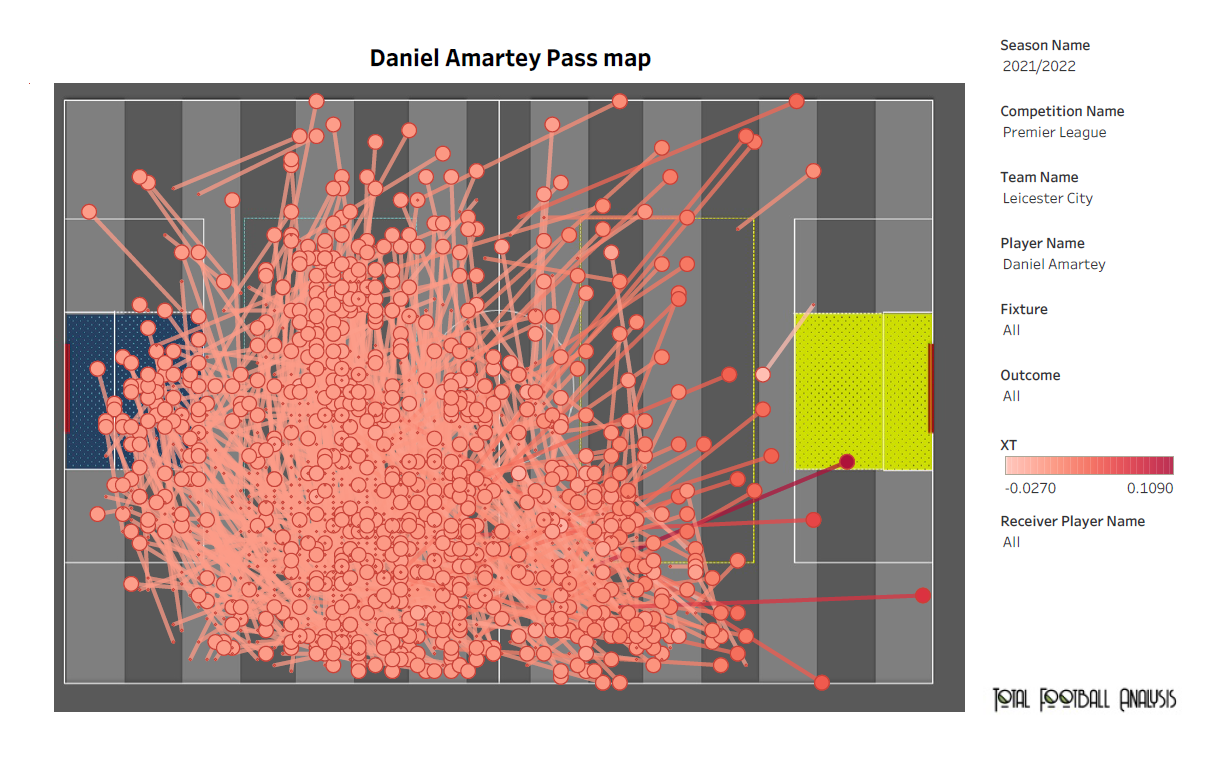 In the above viz., we can see the locations of passes delivered by Amartey. As evident from his pass map, the Ghanian defender has delivered a wide array of passes in various areas of the pitch. He possesses the ability to supply passes between the lines from deep positions and also aid his side with short passes during the build-up phases. The above viz. also indicates his ability to make threatening passes into the opposition’s box. 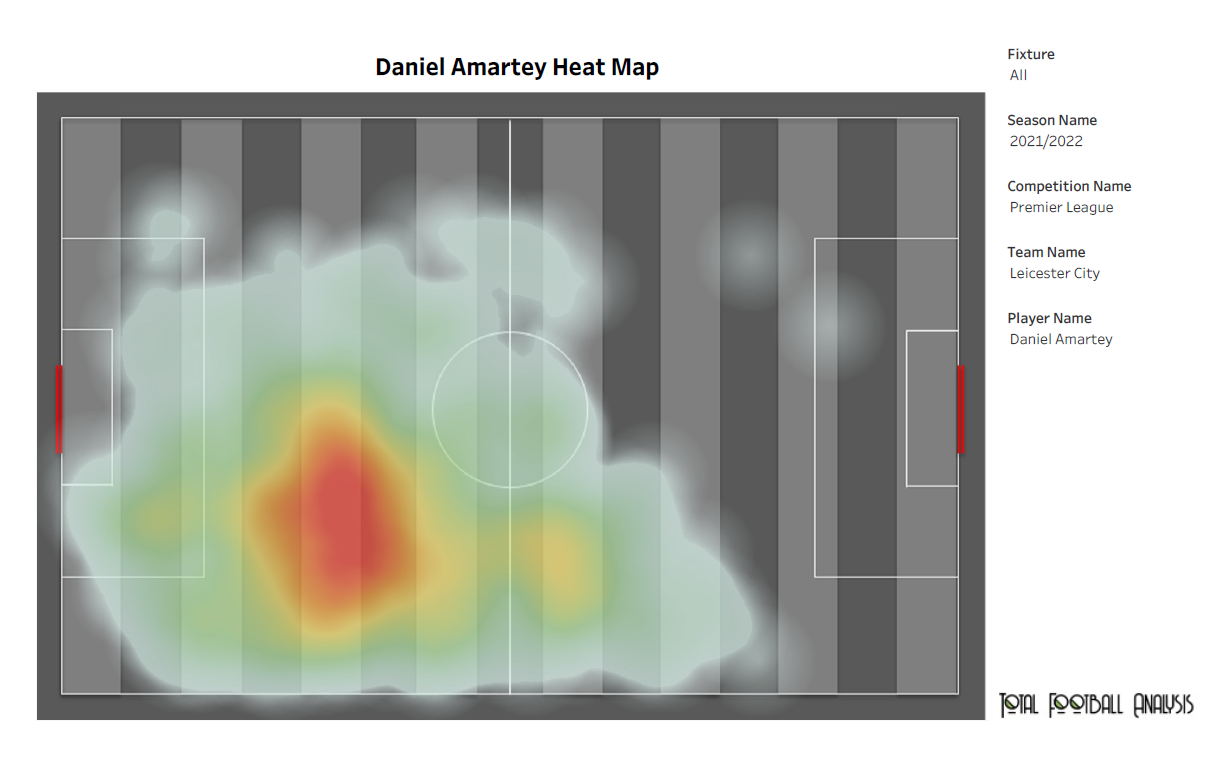 Amartey demonstrates a high work rate and stamina. He remains active on the pitch, consistently tracking up and down. In the above viz., we can see the areas where he is most active. While this season he has mostly operated as a centre-back, Amartey is versatile and can play as a defensive midfielder as well. He possesses a powerful and aggressive mindset, which he displays while closing down his opponents.

Amartey has emerged as one of Rodgers’ most relied upon players during the injury crises. The Ghanian international has also rewarded his manager with robust performances at the back. His recent performances have been a key part of Leicester’s improved defensive display in recent weeks.

The post Under the microscope: Daniel Amartey – The key to Leicester’s improved defensive display appeared first on Football analysis, news, betting and opinion from Leicester City.