Manchester City have made an excellent start to the English Premier League as well as to the UEFA Champions League 2022/23 season. All the credit goes to their transfer business. Erling Haaland was signed in the summer and is now the key player in City’s line-up. However, he is not the only signing who has earned a name for himself. Manchester City have made another signing to replace departing Oleksandr Zinchenko in the team, and his name is Sergio Gomez. He was a former Barcelona youth academy product and was signed from Belgian club Anderlecht in the summer. Pep has given Gomez some playing time, and he is proving to be a good fit in his game plans. 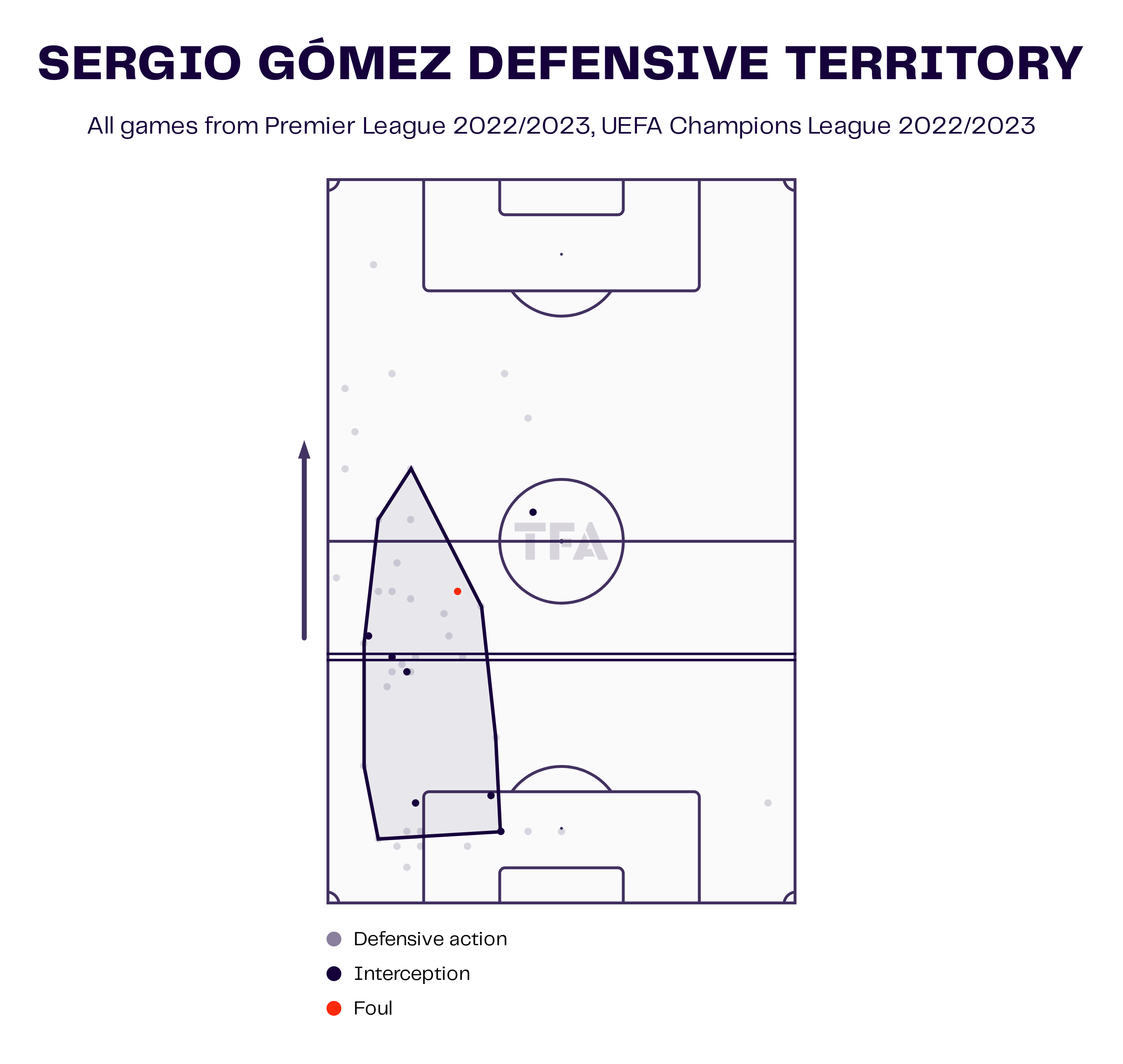 Sergio Gomez has spent 310 minutes on the field for Manchester City combined in the English Premier League and the UEFA Champions League. Gomez is yet to start a league match but has already started in two Champions League matches. He has entered most of the games in the last few minutes and has done well in defending the goal. Sergio Gomez’s defensive territory is a bit deep inside his team’s half. He averages 3.5 interceptions and 8.4 recoveries per 90 minutes. The duels win ratio is a bit low at 47.2%, but the player has impressed in some other areas on the pitch. 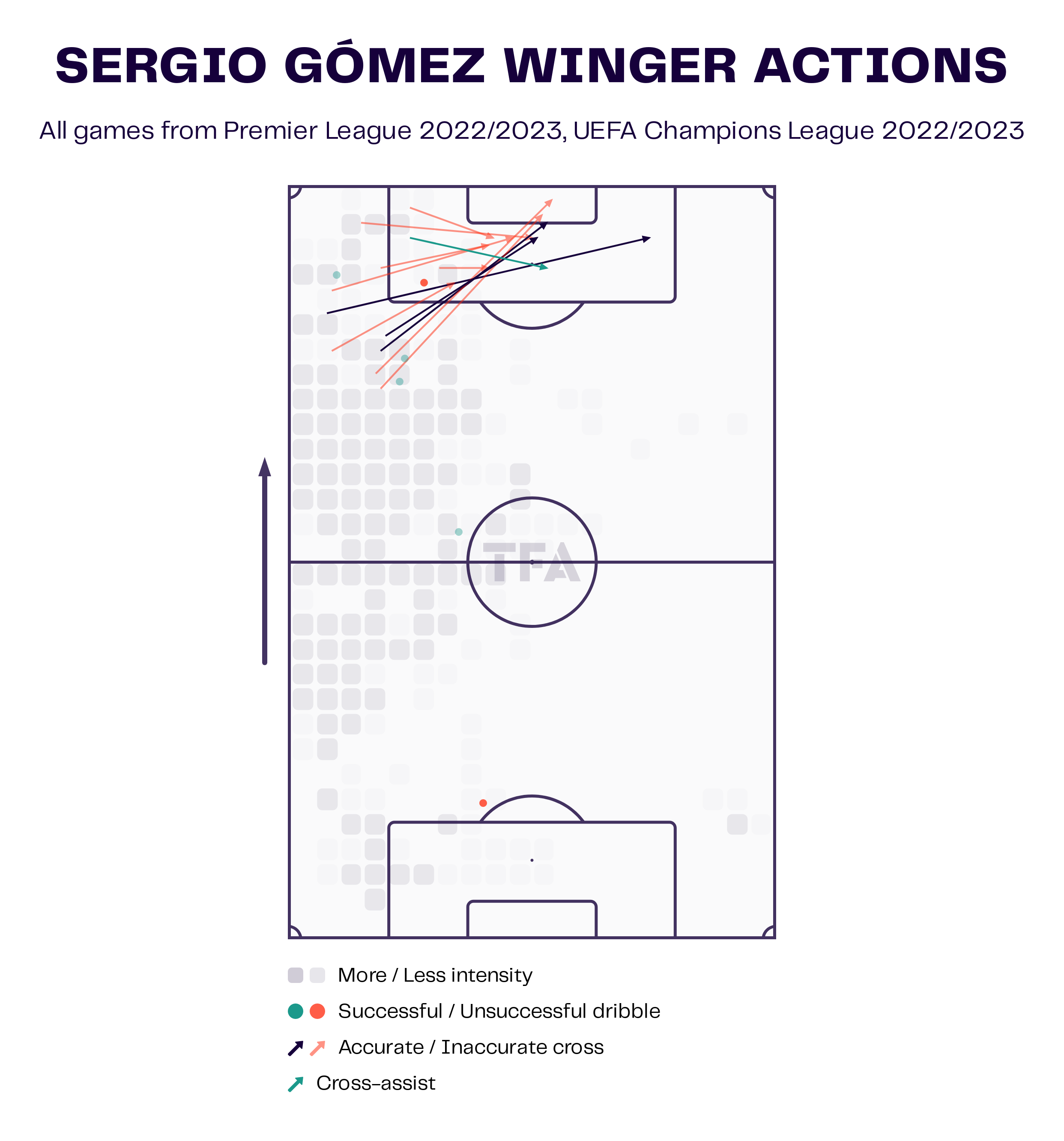 The 22-year-old full-back likes to carry the ball into dangerous areas. The defender likes to carry the ball into the opposition penalty area and has also delivered a few passes into it. The above viz shows his intensity level, crosses and dribbles. We can observe that Sergio Gomes doesn’t stay wide at all times. He likes to come a little bit inside and has delivered a few crosses by coming inside. The full-back averages more than two touches per match inside the penalty box and has provided a cross-assist from inside the box. His average cross rate per 90 minutes is 4.06, but the accuracy rate is a bit low at 28.6%. This shows that Sergio Gomez can also run from outside of the defender and find a teammate inside the dangerous areas. 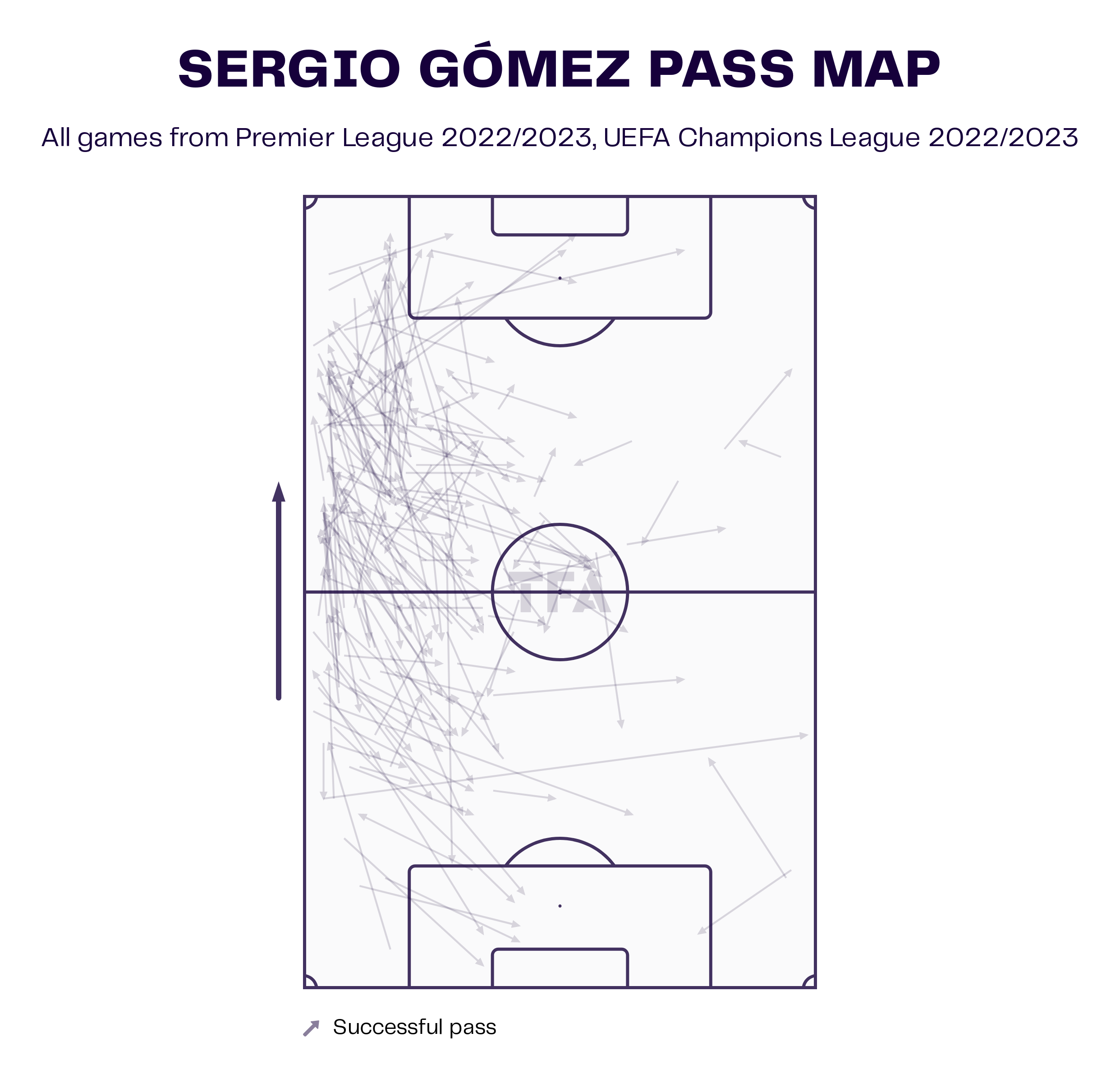 Sergio Gomez is very positive with his passing and averages more forward passes than backward passes. He averages around 70 passes per 90 minutes and has an 85.1% accuracy rate. These passes include 23.8 forward passes and 16.26 backward passes. On the attacking side, his passes to the final third average 8.13 per 90 minutes and to the penalty box average 4.65, with a 50% accuracy rate. This shows his positive intent and could add more assists to his name in the coming season.

Pep Guardiola is impressed with the full-back and has rewarded him with two starts. Sergio Gomez is almost making a substitute appearance in every match and might get ready in a season or two to become a part of the starting 11.

The post Under the microscope: A new left-back in the making for Manchester City appeared first on Football analysis, news, betting and opinion from Man City.