Chelsea are scouting a few players but are yet to make a signing. Antonio Rüdiger and Romelu Lukaku have made a move away from Stamford Bridge, and a few more players are also likely to leave the club. The Blues are looking for their replacements and are making a move for some top players from other European teams. One of the players Chelsea are targeting is Atletico Madrid’s left midfielder, Yannick Carrasco. The Belgian plays as the left wing-back for Diego Simeone’s side and could turn out to be the replacement for Marcos Alonso, who is likely to leave the club in the summer. Chelsea are seeking two top players in the same position for the upcoming season. 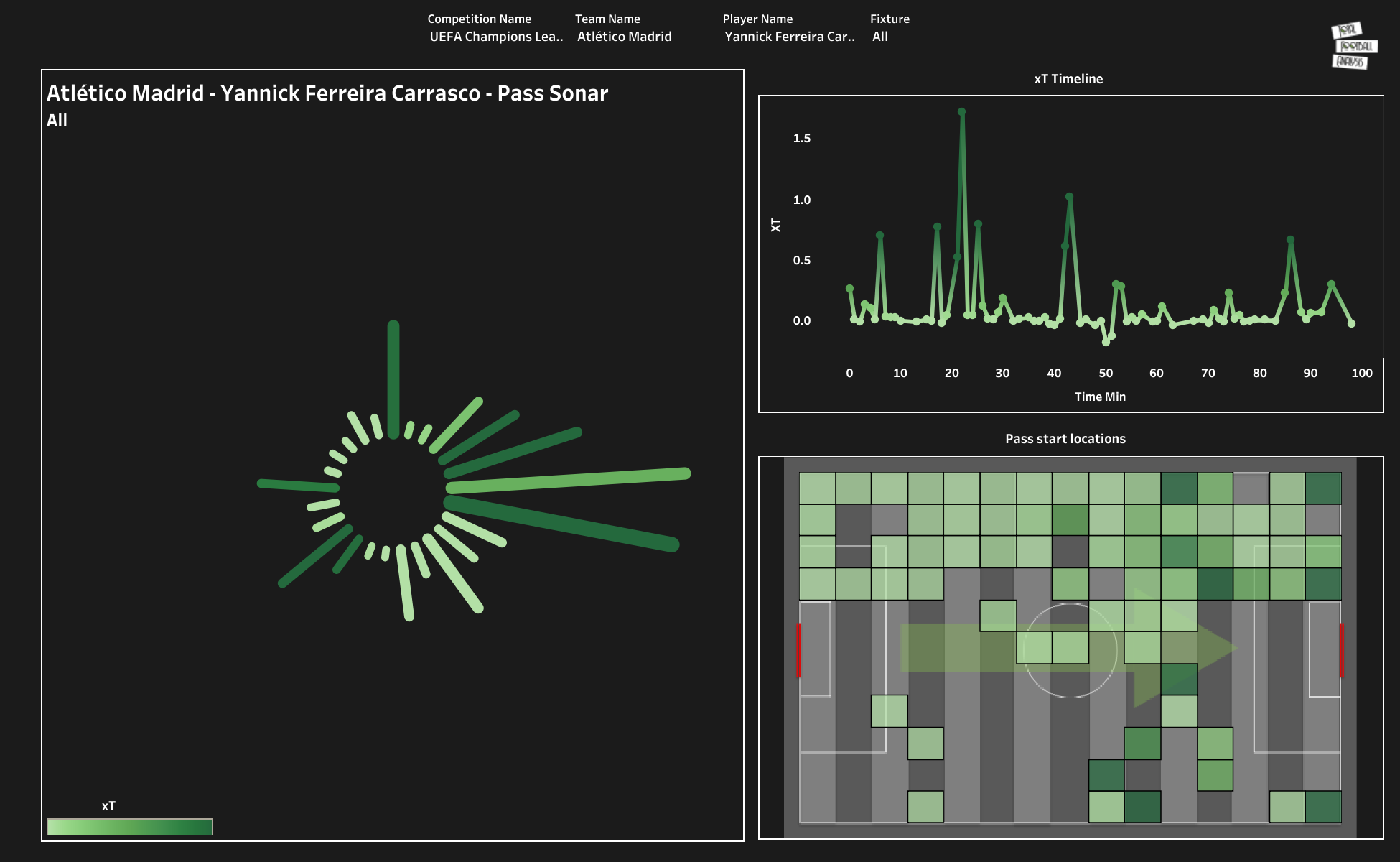 Carrasco started in six of the seven games he featured in the UEFA Champions League but was unable to score or create a goal. He also made 34 appearances in the LaLiga last season. He scored and created six goals each in the league. The above viz shows the pass start location and the threat created from passes at different time intervals in the UEFA Champions League. Carrasco covered a lot of areas on the left wing. He has a more attacking mindset and stretches the opposition’s defence with his pace and skills. The 28-year-old was more effective in the first 30 minutes of the match with his passing. Atletico Madrid play a defensive style of football and usually defend during the last phases of the match with more focus on counterattacks. Carrasco averaged 2.45 progressive runs per 90 minutes and was effective on the counters. 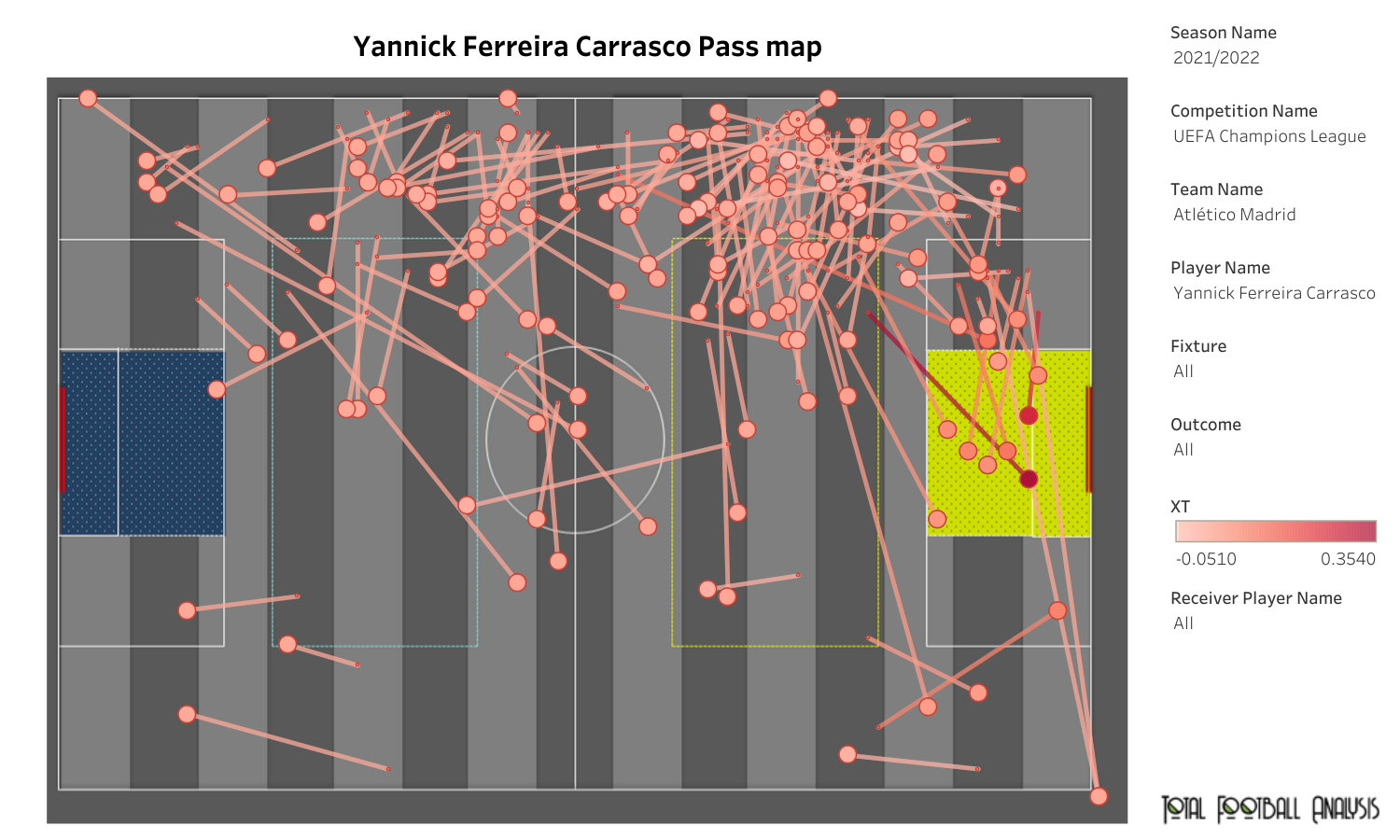 The Belgian averaged 25.5 passes per 90 minutes with an accuracy rate of 78.77%. He attempted 1.4 passes per 90 minutes into the attacking third and had a 100% accuracy rate. The above viz shows that the player penetrated the opposition’s penalty box and attempted a few passes into dangerous areas right in front of the goal. This shows that the player could be effective with his passing and add more creativity to the team. 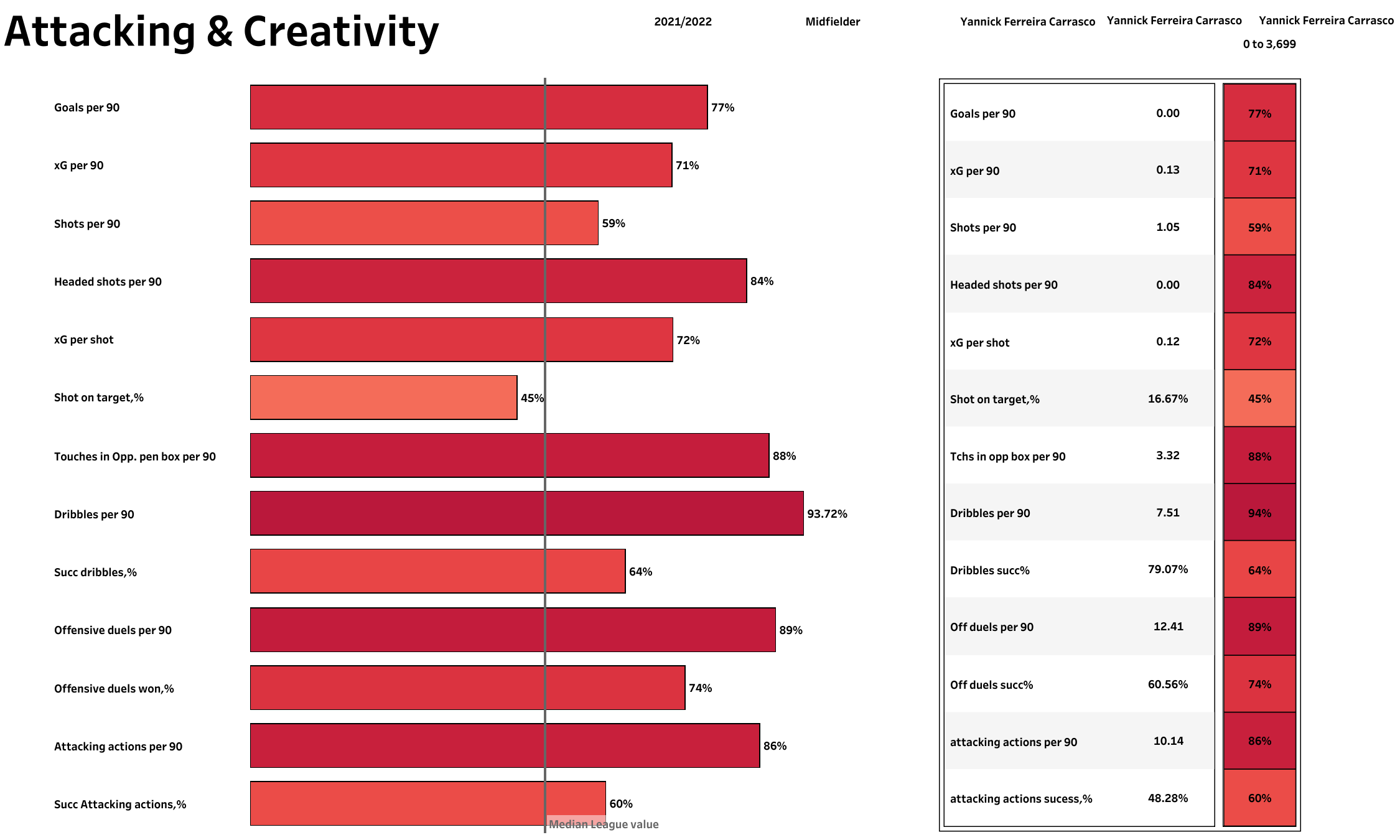 When looking at the above chart, the general rule is that the longer the bar, the better the performance — you can see the league average in the middle, and the % is the percentile rank the player is in. Despite playing a defensive style of football, Carrasco had a high percentile rank among other midfielders in the attacking & creativity charts. Carrasco averaged more than three touches inside the opposition’s penalty box per 90 minutes. He is highly skilled and attempted 7.5 dribbles per 90 minutes with a high success rate of 79%. His involvement in around ten attacking actions per match can create chances for his team.

Carrasco is into his second spell at the Spanish club and has featured 49 times in the UEFA Champions League. He has also played 57 times for Belgium and brings a wealth of experience to the table. Chelsea could use his inventiveness in their pursuit of the first silverware under new ownership. They are facing competition from other clubs to sign the player and might have to heavily negotiate to acquire him. We might see Yannick Carrasco in the blue jersey next season.

The post Transfer Talk: Yannick Carrasco – The versatile left-midfielder could be Chelsea’s next wing-back appeared first on Football analysis, news, betting and opinion from Chelsea.