Manchester United’s search for new players continues as the Red Devils look to improve their squad for the next season. They are looking for players who can provide defensive stability as well as one or two midfielders who can act as a link between the attack and the defence. Erik ten Hag’s first priority is to improve the defence and create a centre-back partnership. Harry Maguire is out of form and needs to improve. Raphael Varane’s season was hit by injury and is still settling into the English Premier League. The Red Devils are looking for defenders in the transfer window and one of the players on their wishlist is Leicester City’s, Wesley Fofana. The French defender was excellent in the 2020/21 season, but injury restricted his game-time last season, and he featured in only seven league games. Fofana is just 21 years old and has a lot of potential. He is also being targeted by rival teams after an impressive start to his career in England. 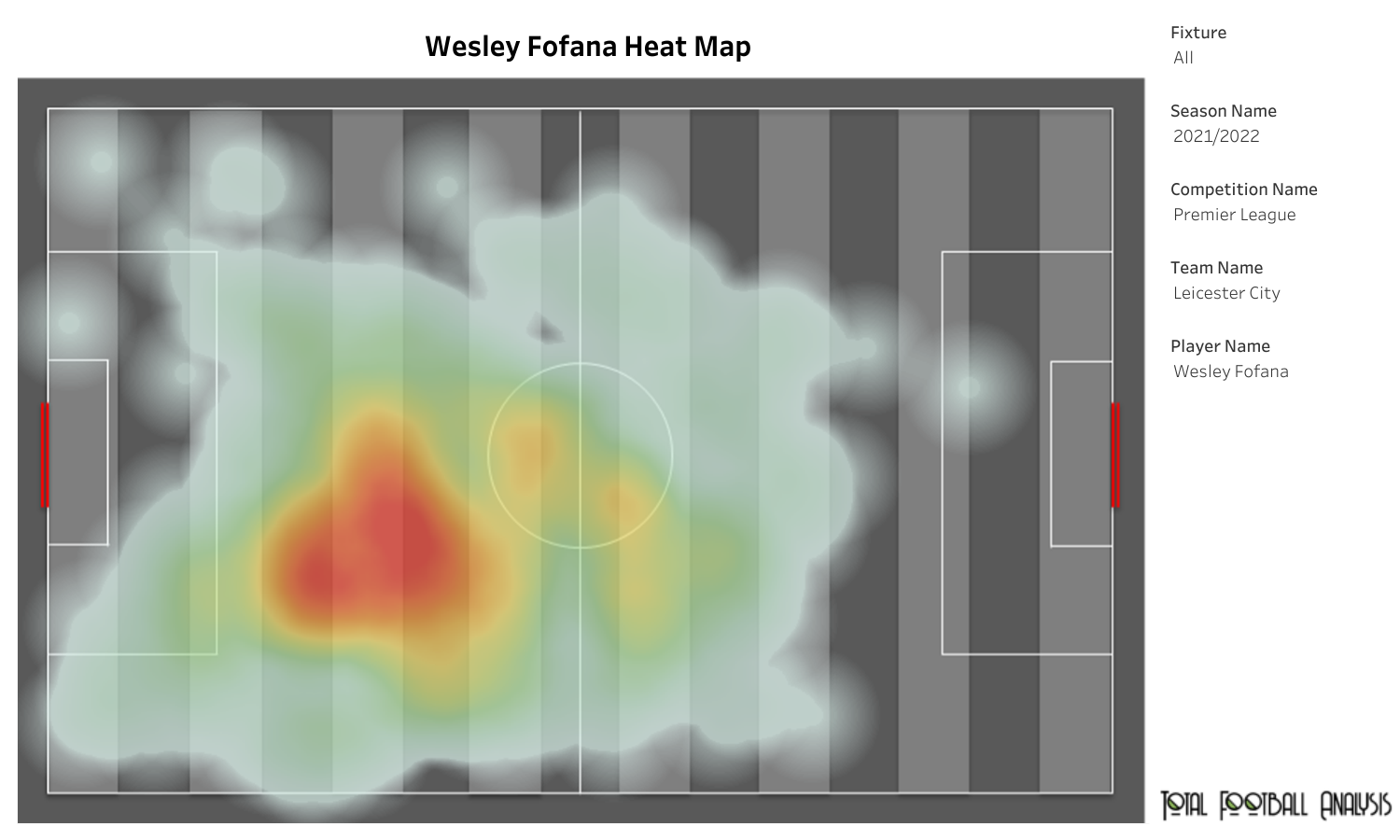 Fofana made seven appearances for the Foxes this season. He returned from injury in April and played as a right centre-back. He was their standout performer in the 2020/21 season and helped Leicester City win the FA Cup. He is confident on the ball and can help to build play from the back. 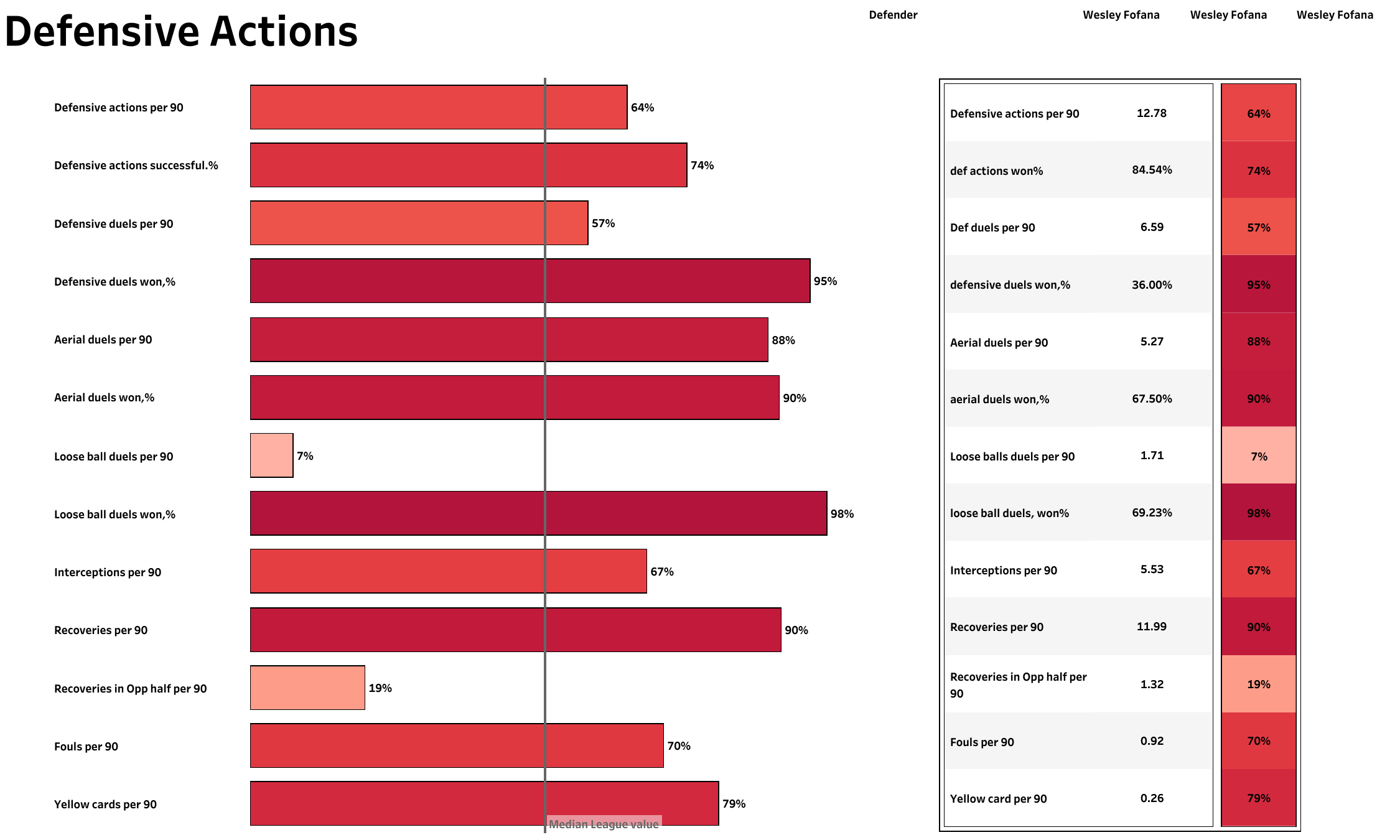 When looking at the above chart, the general rule is that the longer the bar, the better the performance — you can see the league average in the middle, and the % is the percentile rank the player is in. The above viz shows Fofana’s stats in comparison to other defenders in the league. Last season, he was involved in 12.78 defensive actions per 90 minutes with a success rate of 84.54%. The player had a high percentile rank for winning duels and making recoveries. However, he struggled to make recoveries inside the opposition’s half. 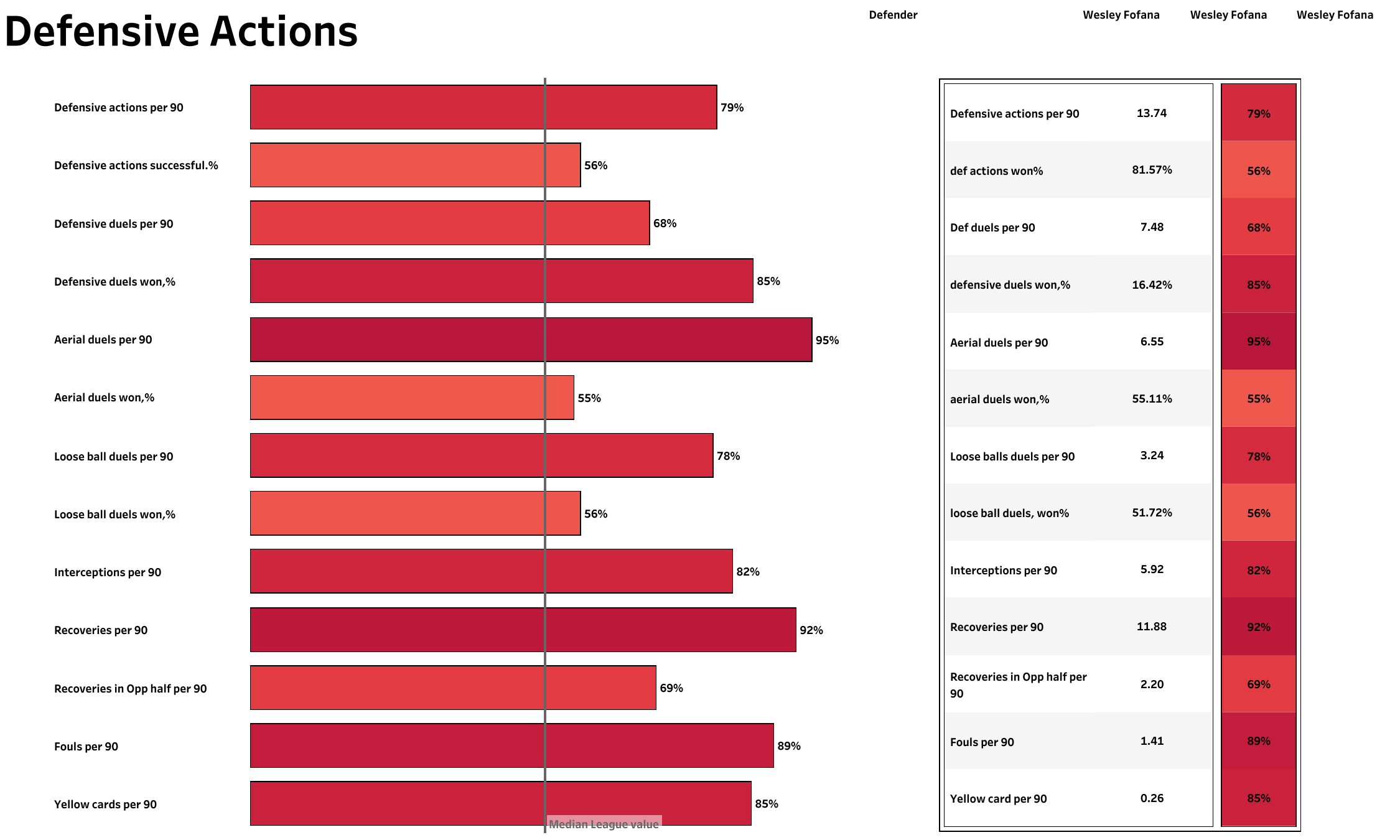 The above chart shows the defensive actions from the 2020/21 season. He featured in 28 games for the Foxes. Fofana was involved in more defensive actions and had a success rate of over 80%. If we compare the above two visuals, then we can observe that the defender contested more duels in his first season at the club. His duel win percentage was low, but this was mainly due to the number of games played by him. The recovery rate was similar, but Fofana made more recoveries in the opposition’s half than he did last season. Overall, the defender is not afraid of contesting any duels and has won a few duels for his side.

Wesley Fofana is yet to score a goal for Leicester City in the English Premier League, but the defender is a threat in the air going forward during set-pieces. He can win duels for his side and has a high recovery rate. He could be a good addition to Manchester United’s defence and would be an asset in the long run. The Red Devils will look to sign him before the rival teams make a better offer.