Manchester United continue their search for players under the new management. They have already released some of the players and are hearing offers for the unwanted players. Erik ten Hag’s priority is to strengthen the leaky and unsettled defence. Manchester United are yet to find their best combination at the back. One of the targets that have emerged for the Red Devils is Ajax left-back, Nicolás Tagliafico. The Argentine joined the Dutch club back in 2018 and since then, has been one of the top performers. Tagliafico carries a lot of attacking threats and is already on the wishlist of a few European clubs. Last season, he helped his side to win the league title and reach the Round of 16 of the UEFA Champions League. He is 29 years old and edging towards the end of his career. But the player has 3–4 years left in him and Manchester United have set their eyes on him. 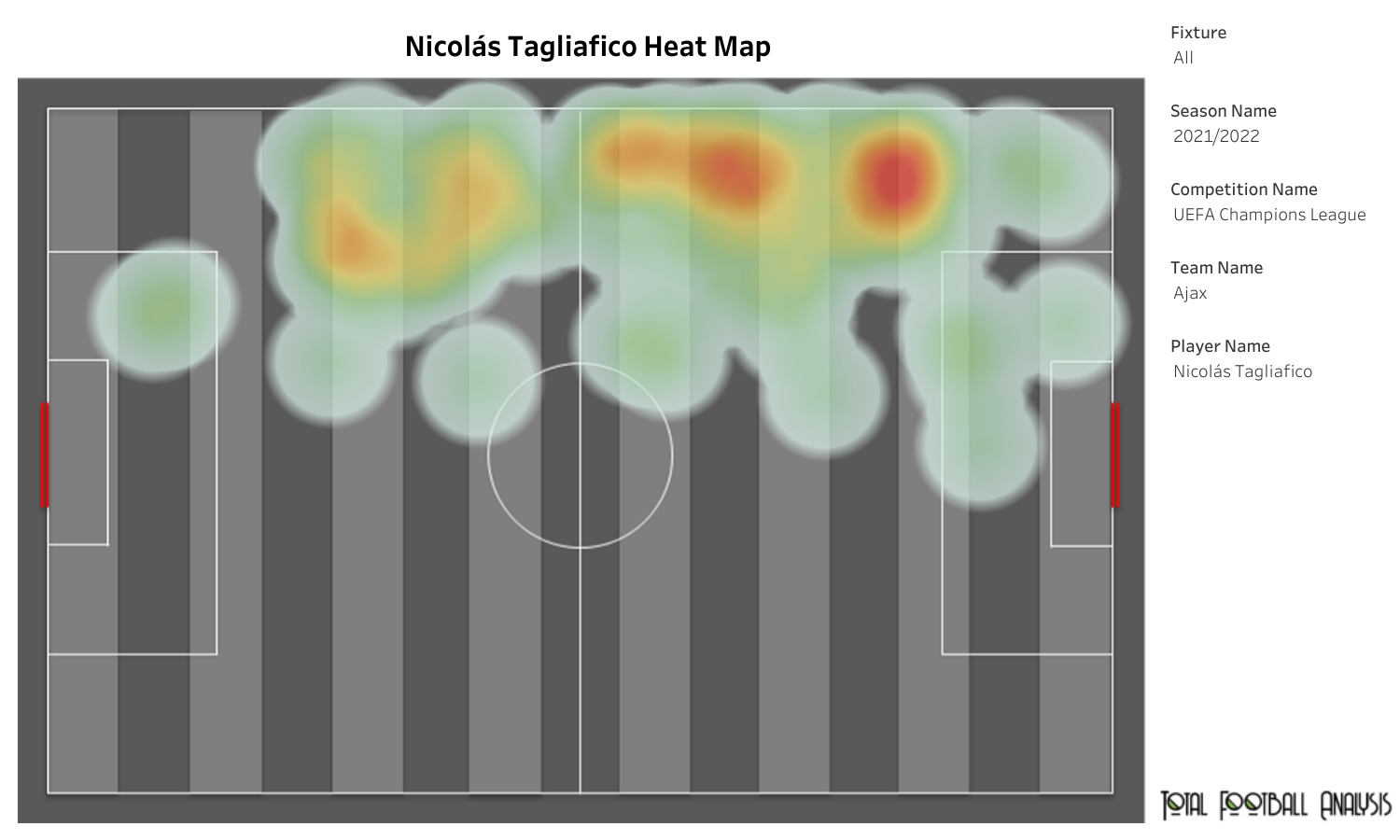 Last season, Tagliafico made 29 appearances, and 17 were off the bench. He became a second-choice full-back behind Daley Blind. However, the player managed to score three goals and provide four assists in all competitions. The above viz shows the heat map of the full-back in three UEFA Champions League appearances. In the 144 minutes he spent on the pitch, Nicolas Tagliafico managed to provide an assist. The heat map shows that Tagliafico played a very high attacking line, and his average position was inside the opposition’s half. He penetrated the opposition’s penalty box quite often and took six touches inside it. Previously, he made 31 appearances in the elite competition and started in every match. The full-back has been a regular choice in recent seasons for Ajax. 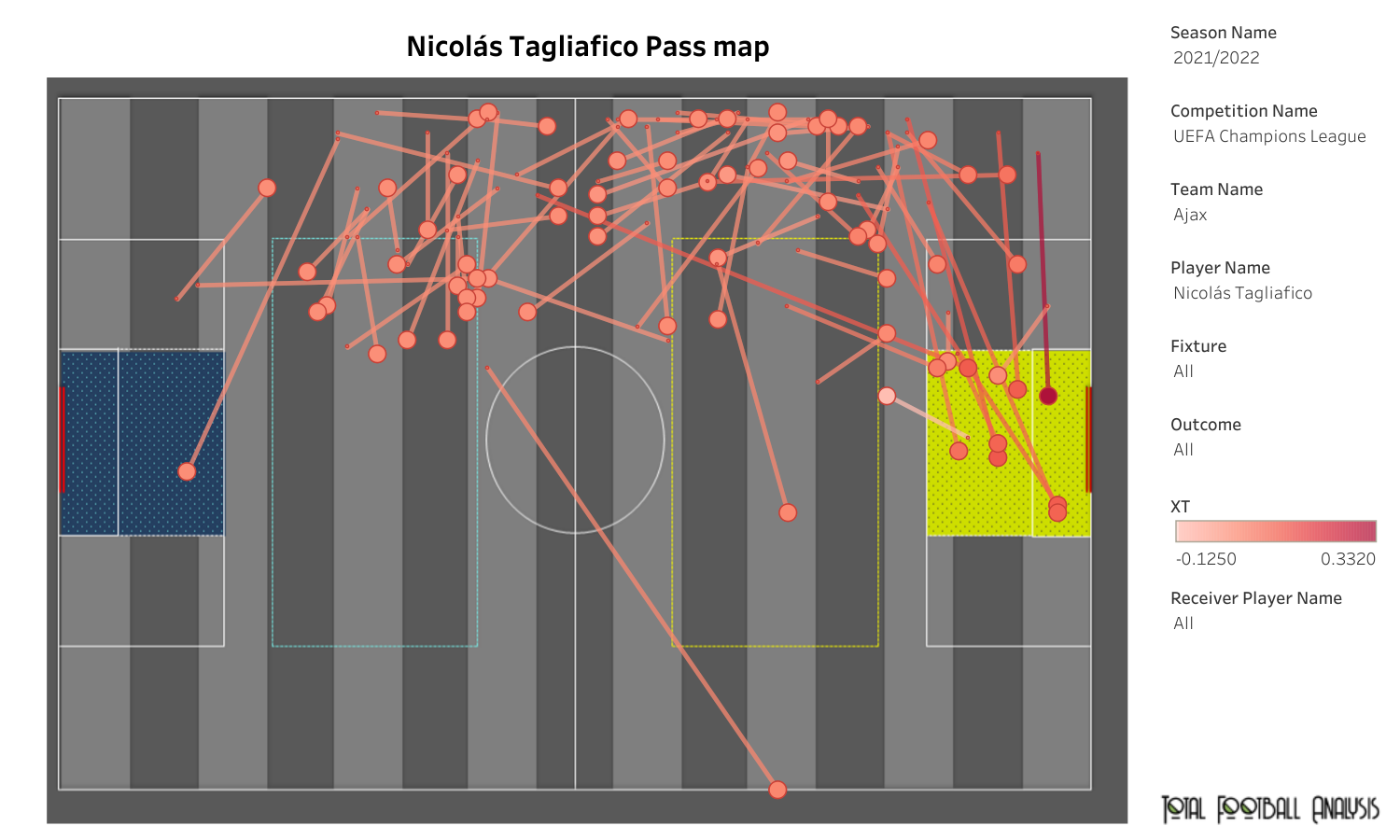 Tagliafico averaged 43.78 passes per 90 minutes with an accuracy rate of 79.17%. Of these 43 passes, 5.47 were attempted into the attacking third. The above viz shows that the full-back attempted a few crosses and passes into the opposition’s penalty box. Overall, he made 72 passes, and these included six crosses and a through pass. This shows that the full-back can create threats with the ball at his feet. 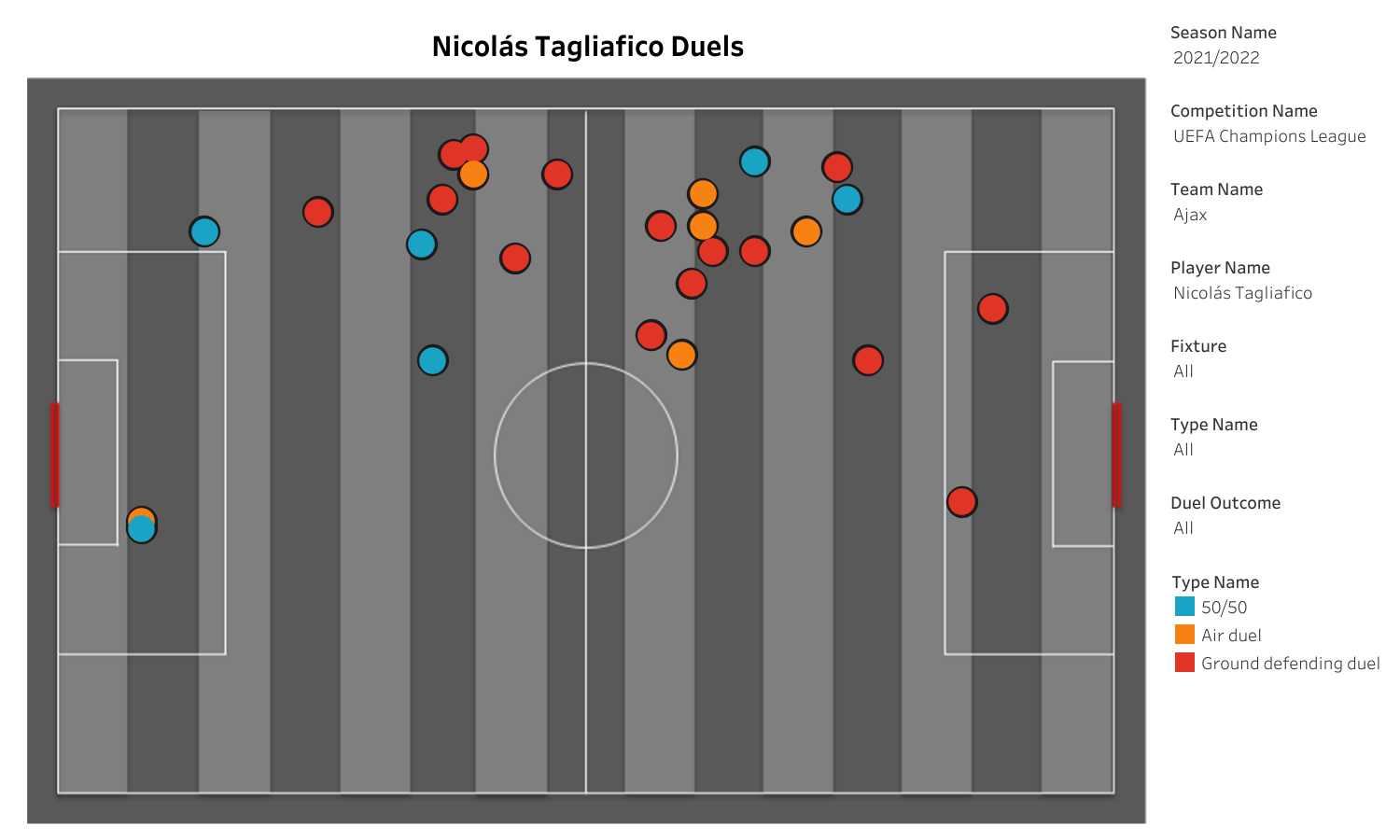 The 29-year-old Argentine was involved in 12.16 defensive actions per 90 minutes with a 75% success rate. The above viz shows all the duels that were contested by the player. He contested 9.73 defensive duels, 3.65 aerial duels and 3.65 loose ball duels per 90 minutes. Tagliafico won 25% of defensive duels, 83.3% of aerial duels and 50% of loose ball duels. He had a very high win percentage amongst other defenders in the league. The player also made three interceptions and 17 recoveries. Of these 17 recoveries, ten were made inside the opposition’s half.

Tagliafico is an attacking full-back who was also successful in most of his defensive actions last season. He is on the wishlist of his former manager and could be on his way to England. Manchester United are still monitoring other players as they already have two quality left-backs. However, Nicolás Tagliafico could become a great addition to ten Hag’s side.