So far in this summer transfer window, West Ham United have signed Nayef Aguerd from Stade Rennais to strengthen their defence, Flynn Downes from Swansea City to reinforce their midfield and signed goalkeeper Alphonse Areola from PSG on a permanent basis. But they are yet to sign an attacker as they recently missed out on Jesse Lingard to the newly promoted Nottingham Forest. Having missed out on Lingard, there have been reports from some outlets claiming that the Hammers are interested in bringing in Arsenal outcast, Nicolas Pépé. 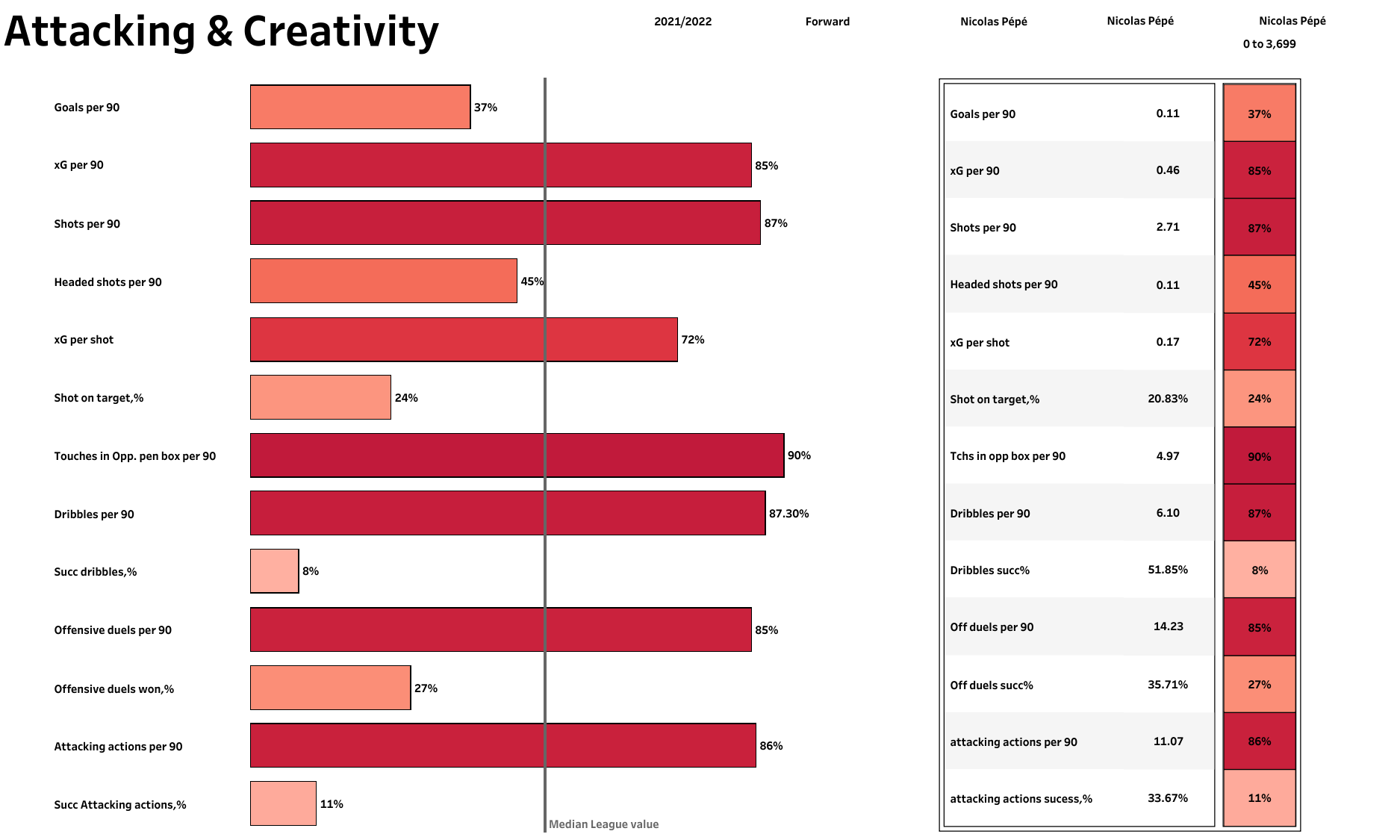 Pépé played 20 Premier League matches last season for Arsenal but only made five starts. Most of his appearances came off the bench, and he played for only 681 minutes in the league. He vastly underperformed on his xG as he netted only one goal at a rate of 0.11 per 90, less than a quarter of what xG predicted. He took 2.71 shots per 90 but hit a pitiful 20.8% of his shots on target. The Ivorian registered nearly five touches in the opponents’ penalty box per 90, showing that he does get into good positions. He attempted more than six dribbles per 90 but could complete only 51.85% of his take-ons, the latter putting him in the bottom 8%. 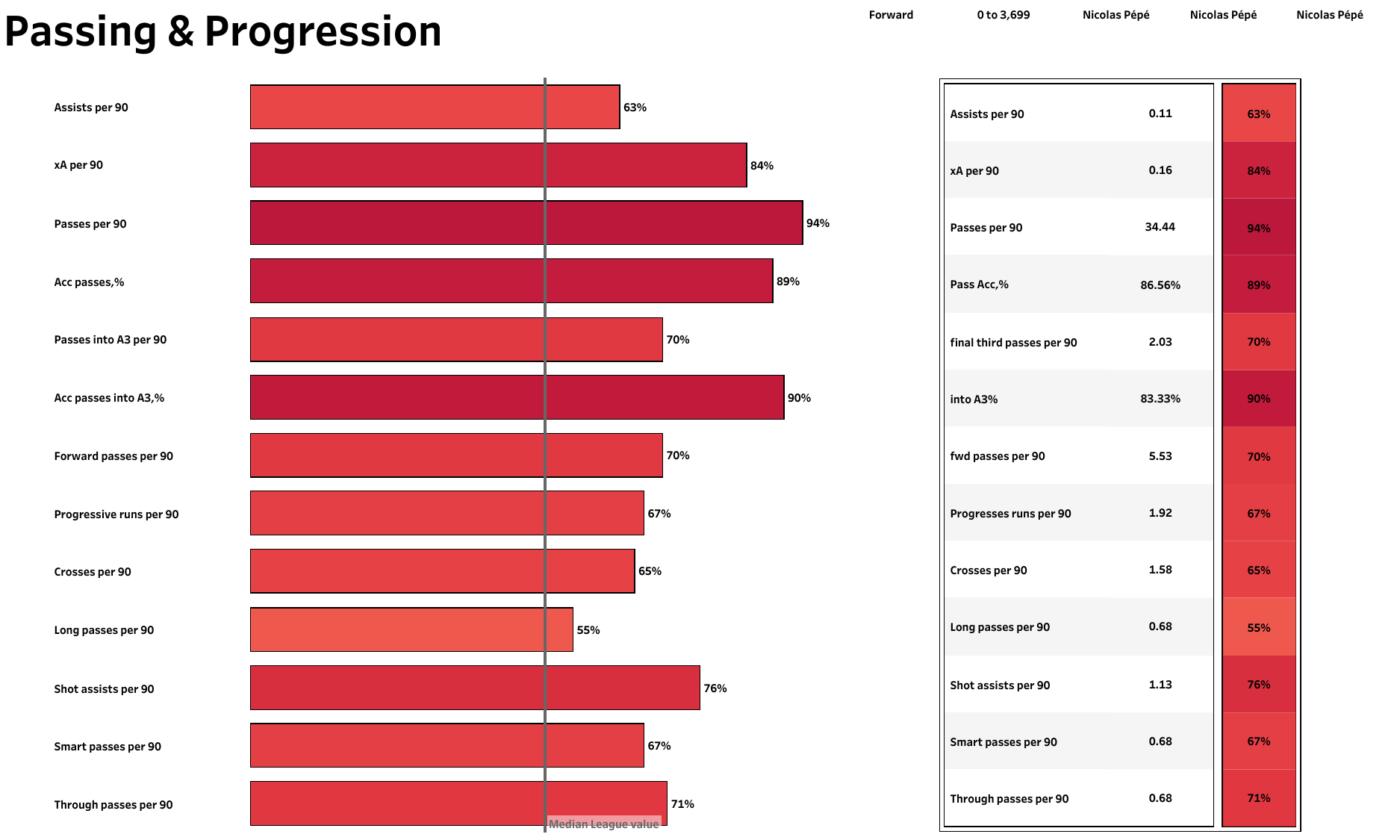 Pépé provided two assists at a rate of 0.11 per 90 but still underachieved compared to his xA  of 0.16. He was quite the volume passer whenever he was on the field attempting 34.4 per 90 and completing just under 30 passes per 90. He attempted only two passes into the attacking third per 90 but completed 83.3% of them. The Ivorian made just under two progressive runs per 90 and 1.58 crosses per 90, putting him well above average in both categories. His 1.13 shot assists per 90 were good enough to be ranked in the upper quartile. 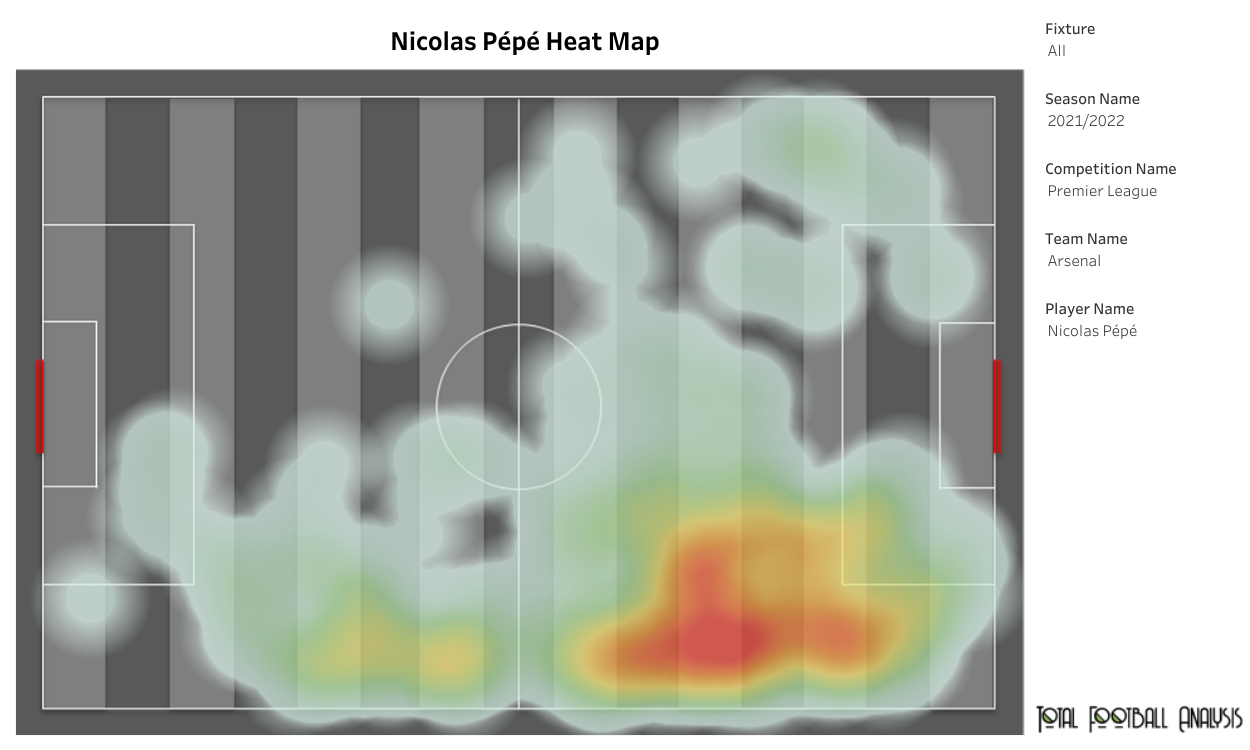 Pépé played most of his football as a right-winger last season, which is his natural position. He often cut inside with the ball at his feet. He completed 1.3 passes into the penalty area per 90, 7.79 progressive carries per 90, 1.3 carries into the penalty box per 90 and also received 8.57 progressive passes per 90. Defensively, he attempted 15.8 pressures per 90, 3.0 tackles & interceptions per 90 and 1.69 blocks per 90. 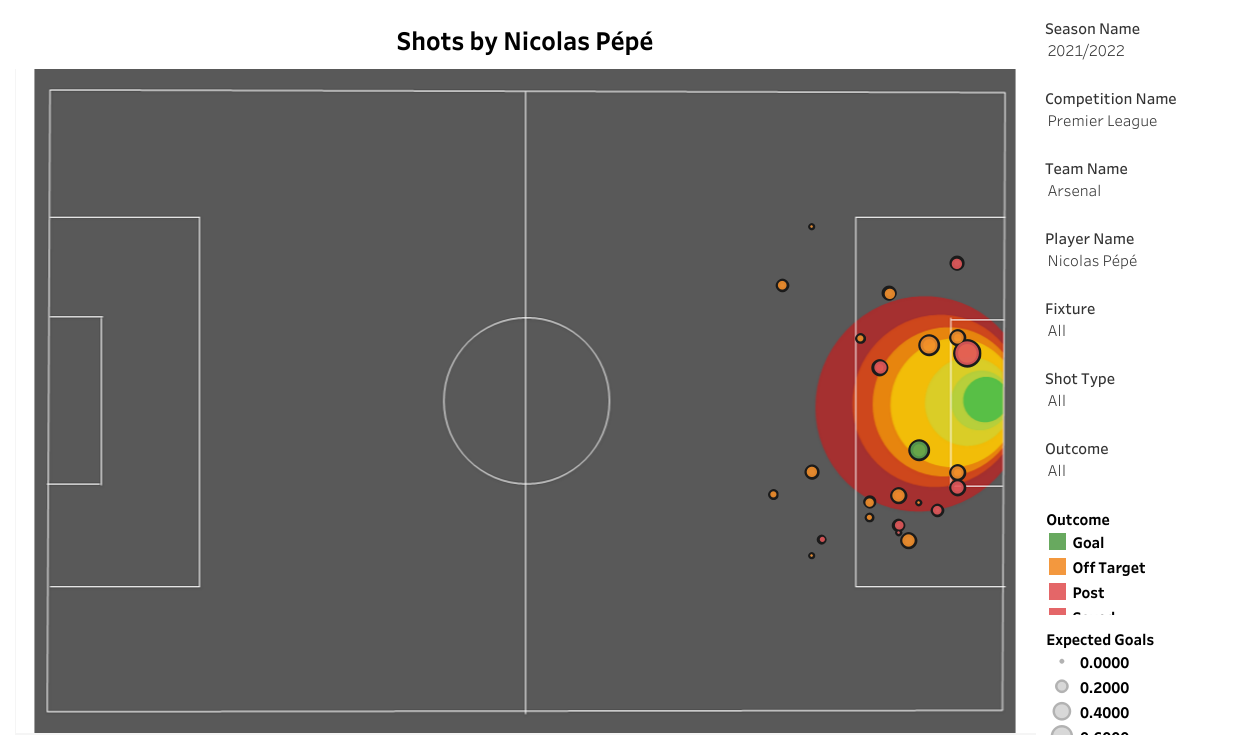 Pépé’s lack of finishing ability can be seen in the above shot map. He missed lots of fairly big chances to score goals which explain his massive underachievement compared to xG. Overall, he took 23 shots but could score only once when he should have scored at least two or three more. This is despite his average shot distance falling from 19.4 yards in his first season at the Emirates Stadium to 15.2 last season.

Still the club-record transfer fee for Arsenal, Nicolas Pépé has never really justified his price tag of €80 million that the Gunners paid to Lille back in 2019. There have been flashes of brilliance, but it was nowhere near enough to meet expectations. West Ham United should not attempt to sign him. At best, it must be a loan deal to bring in the Ivorian.