Tottenham Hotspur will make a return to the UEFA Champions League next season after a two-year absence, thanks to finishing fourth on the last matchday of the season. While the winter signing of Rodrigo Bentancur has been successful, there are no strong backups for him and Pierre Emile Hojbjerg. Harry Winks has been in and out of the starting lineup and Oliver Skipp has not featured since February due to a lengthy injury. One player who could benefit Antonio Conte is Serbian midfielder, Nemanja Matic. The 33-year-old has been allowed to look for a new club after being released by Manchester United. In this article, we will dissect how the Serbian veteran could benefit the Spurs in the short term. 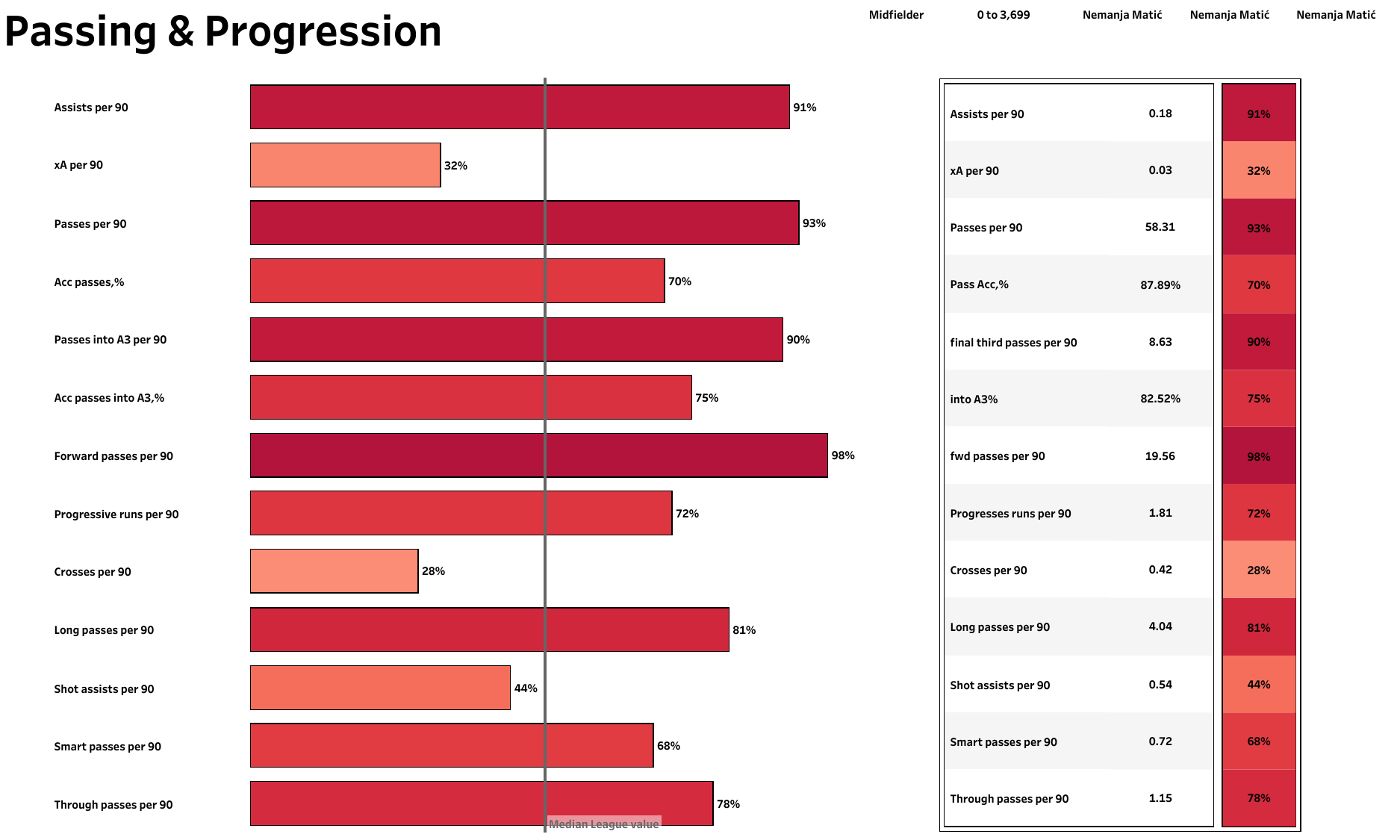 Matic appeared in 23 games for Manchester United in the 2021-22 Premier League season. He played only 1,382 minutes in the league. In his limited playing time, the Serbian provided four assists at a rate of 0.18 assists per 90. This is six times as high as xA per 90’s estimation of 0.03. He also attempted over 58 passes per 90, and he had a safe pair of feet, completing just shy of 88% of his passes. The 33-year-old also showed his ability to progress the ball upfield, with 8.63 pass attempts into the final third per 90 at an astonishing accuracy of 82.52%. 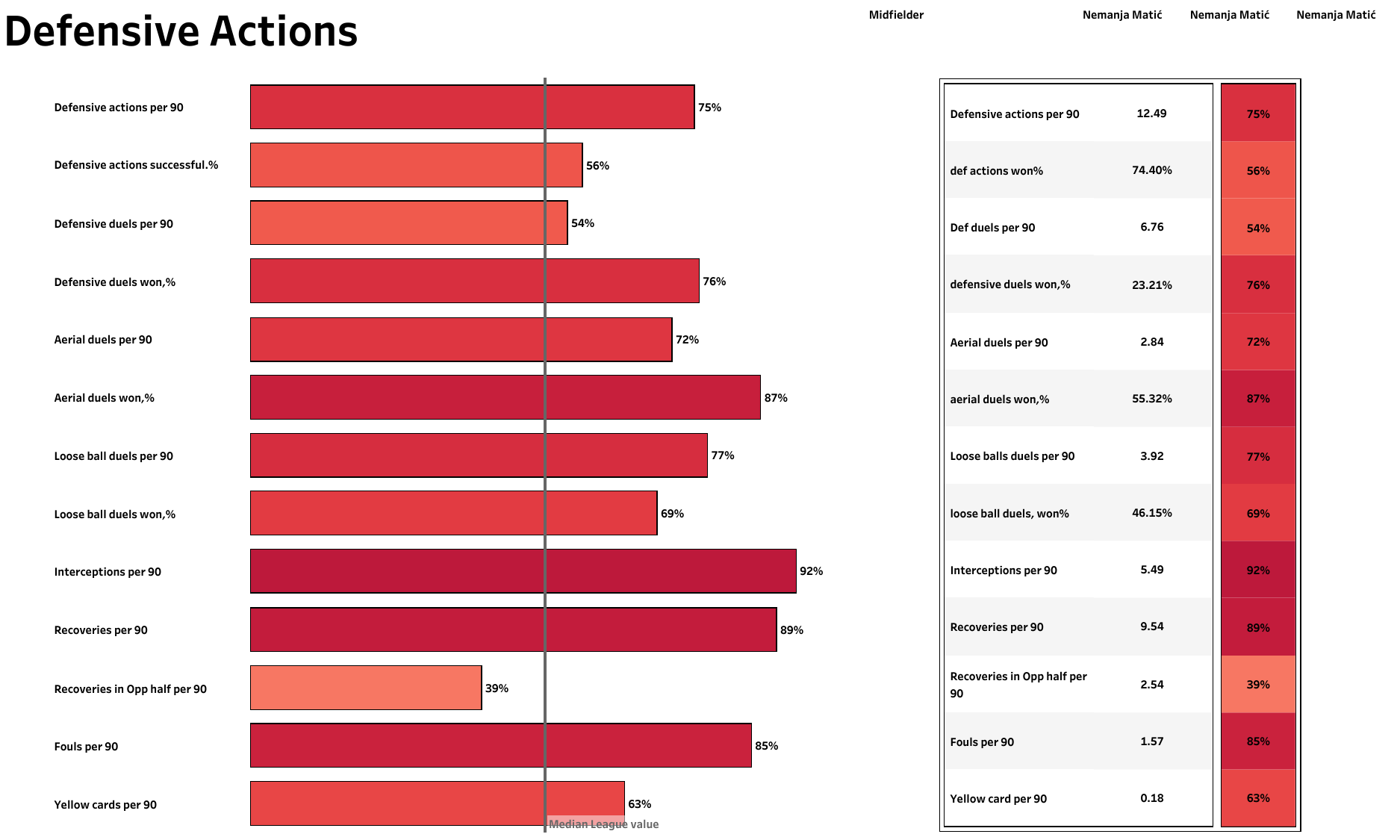 Matic attempted 12.49 defensive actions per 90 and was successful in nearly three-fourths of the occasions. The Serbian also attempted 6.76 defensive duels per 90, coming out with a success rate of 23.21%. This success rate puts him in the upper quartile for midfielders. With his height of 194 cm, Matic won 55% of his aerial duels, which ranked him in the top 13% of midfielders. In addition to these, Matic completed 5.49 interceptions per 90 and 9.54 recoveries per 90, ranking him in the 92nd percentile and 89th percentile, respectively. 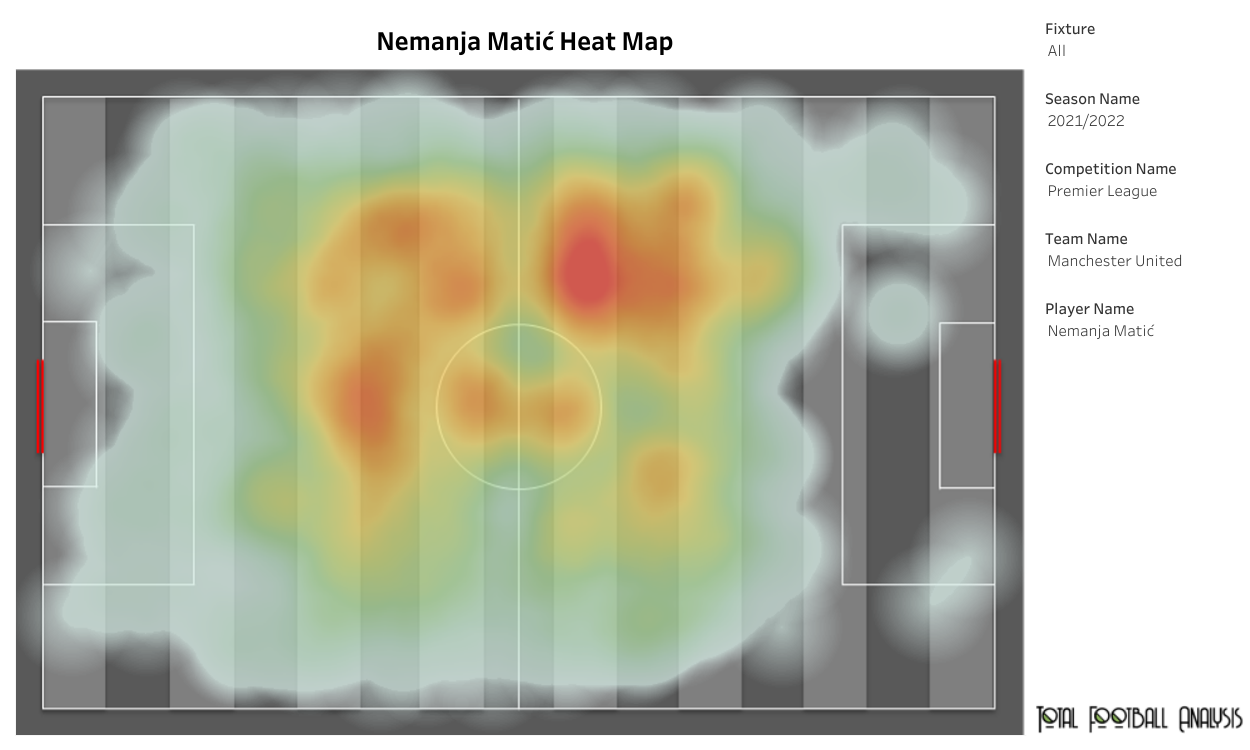 Given in the above visual is the heat map of Matic for Manchester United in the recently concluded Premier League season. In his limited game-time, the Serbian completed 5.65 progressive passes per 90, 6.56 passes into the attacking third per 90 and 7.79 progressive carries per 90. Additionally, on the defensive end, the former Benfica man attempted 15.1 pressures per 90, 4.29 tackles and interceptions per 90, 2.21 blocks per 90 and 2.01 clearances per 90.

Manchester United endured a miserable campaign, finishing sixth on the points table and with a goal difference of 0. As part of the rebuild by new manager Erik ten Haag, Matic has been allowed to go by the Red Devils. And as seen from the above stats, the Serbian has performed decently whenever he has been on the pitch. So, Tottenham Hotspur and Antonio Conte should waste no time in trying to acquire the veteran midfielder.

The post Transfer Talk: Nemanja Matic – Could the out of contract midfielder join Tottenham Hotspur? appeared first on Football analysis, news, betting and opinion from Spurs.