Leicester City have declared their interest in signing on-loan Norwich City midfielder, Mathias Normann. The midfielder joined Norwich City on a season-long loan from the Russian side Rostov at the start of the campaign. Since then, he has made 18 appearances in all competitions this season. Following an impressive start to the season, the 25-year-old has struggled with his performances.

Normann underwent surgery on his pelvis that kept him sidelined for an extended period during Christmas. In a recent interview, the 25-year-old admitted that he has not been performing well since his return. However, despite a slump in his form, Normann has shown his capabilities and could prove to be a valuable signing for the Foxes. According to reports, Leicester enquired about the availability of the midfielder back in January. With Norwich in a relegation battle, it is looking increasingly unlikely that the Canaries would tie Normann to a permanent deal, although they do have the option to make his loan move permanent.

Leicester City are likely to see some changes in the squad in the summer. With the likes of Youri Tielemans and Hamza Choudhury seemingly on their way out of the King Power Stadium, the Foxes would benefit from adding a midfielder of Normann’s quality to their ranks. Given his strengths as a defensive midfielder, the 25-year-old would be competing with Ndidi and Soumare for a place in the starting lineup.

Let’s take a look at some stats to gauge if Normann would be a suitable signing for the Foxes. 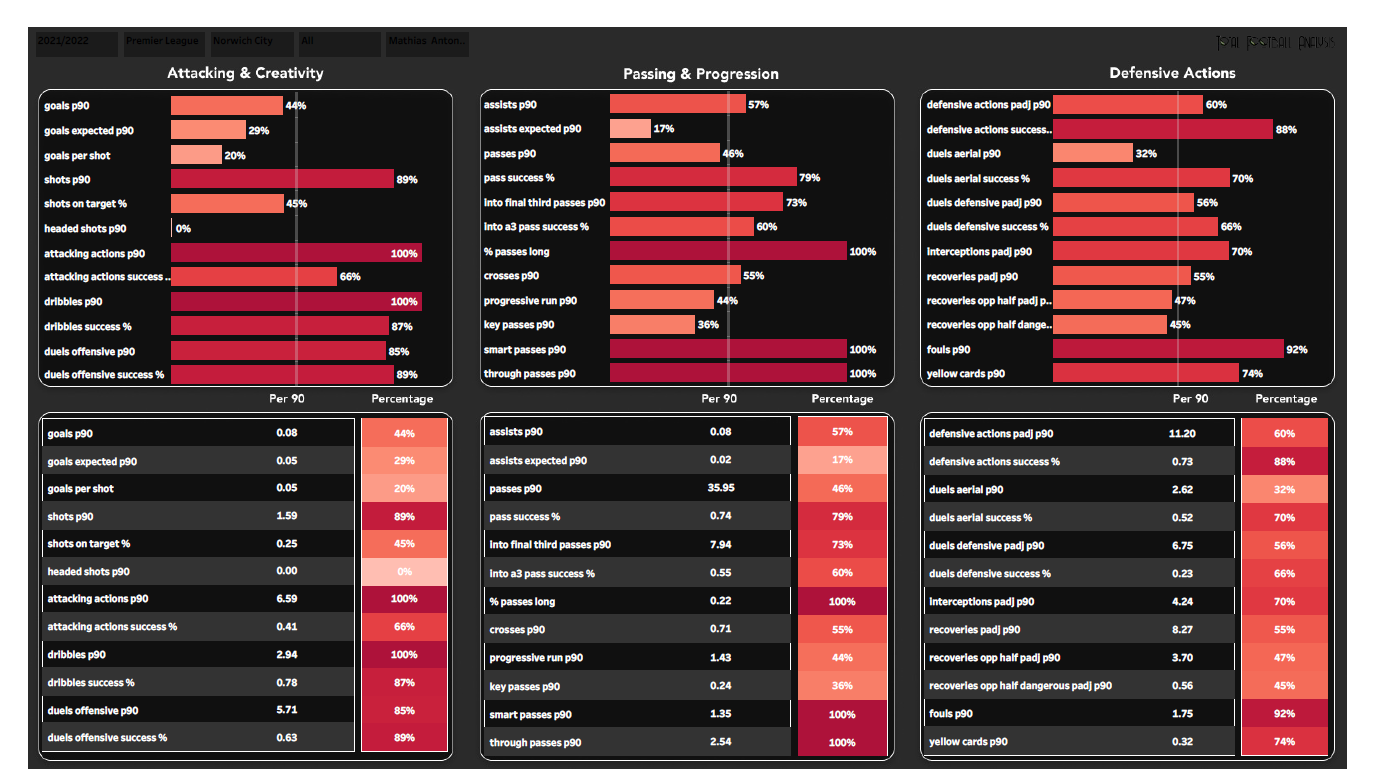 In the above viz, we can see Normann’s overall stats in the Premier League. The Norwegian midfielder’s defensive stats are decent, with his most notable stats being defensive actions successful, defensive duels success rate, and interceptions per 90. The vast majority of his attacking & creativity, and passing & progression stats, are above the league median as well. Normann is an able passer of the ball who is capable of switching the play due to his impressive range of passing. He displays brilliant awareness on the pitch and can cover exact spaces during transitions. Normann’s reading of the game allows him to make good decisions during the defensive phases. 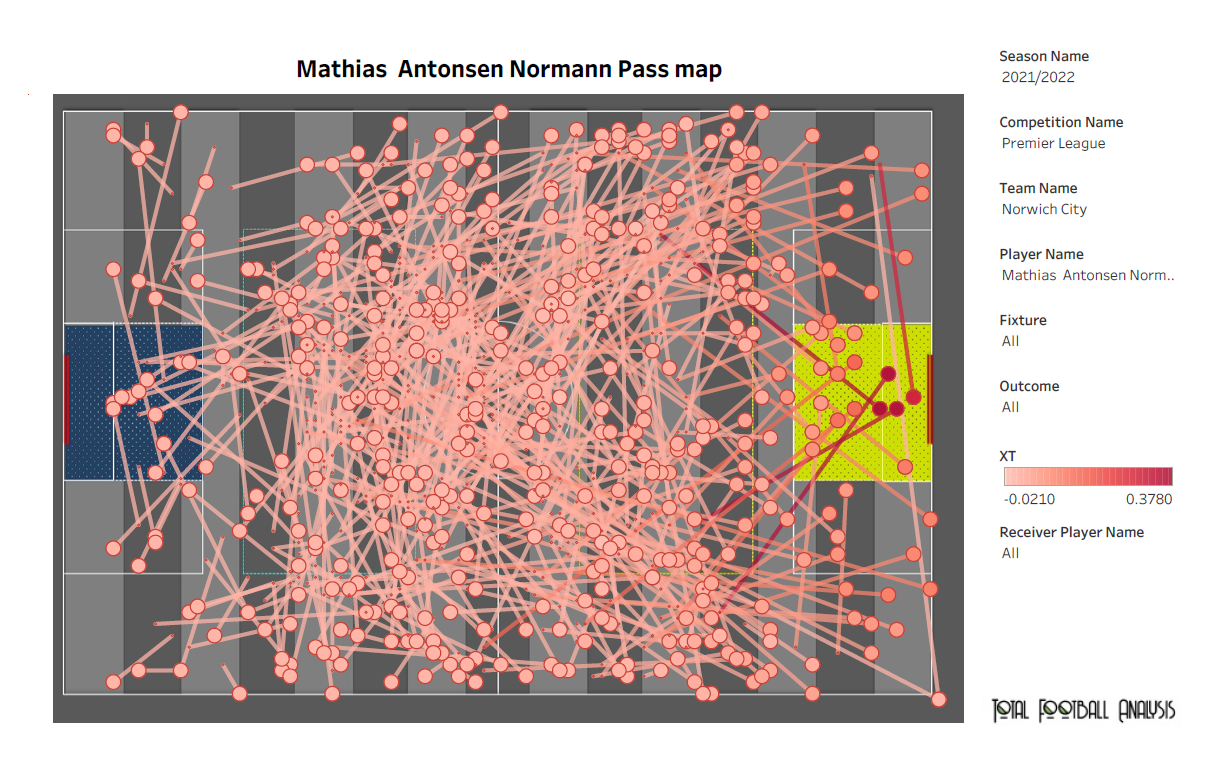 The above viz displays the locations on the pitch where Normann has delivered his passes. One of his strongest attributes is his passing. The 25-year-old can push and pick out attackers in space with his precise passing. The Norwegian has a wide array of passes in his skillset. He can mask the direction of his passes by utilizing his body feint. This movement makes it harder for the opponents to read the direction of his passes. Normann is consistently looking to create a passing option for his teammates in possession. The above viz also highlights his many threatening vertical passes in the opposition’s half. 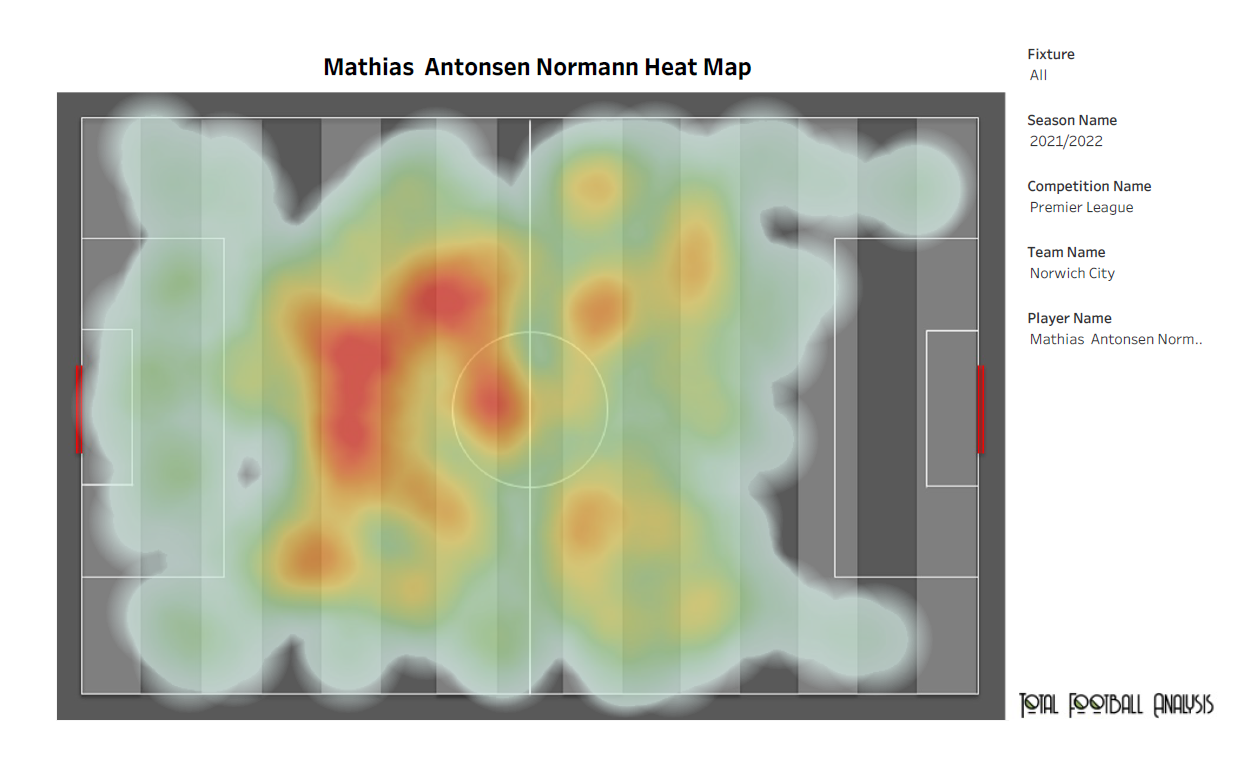 In the heat map above, we can see Normann’s area of activity on the pitch. He is usually deployed as a defensive midfielder and sits in front of his defense, picking the ball up and then moving it on to recycle possession and allow for attacks to start. He has an impressive ability to progress forward with the ball and push the ball into the opposition’s penalty area. As a deep-lying playmaker, Normann tends to support his wingers by dropping deep. He then receives the ball and tries to pick out his teammates in threatening spaces.

Despite a drop in his performances after his return from the injury, Normann has shown his qualities as a defensive midfielder. He would be a brilliant addition to Brendan Rodgers’ midfield.