Sporting CP midfielder, Matheus Nunez, is one of the top targets of the English Premier League clubs. He is one of the top-rated midfielders in Portugal and was tipped for a move away from Sporting in the summer. At the age of 23, he already has eight international caps for his country. Some of the teams, including Chelsea, are trying to sign the midfielder. Nunez has been a regular for Sporting since joining the club in 2020 from Estoril. Last season, he also played for Sporting in the UEFA Champions League and was noticed by the other clubs. Some of his stats from the elite competition last season show why teams are eager to add him to their squad. 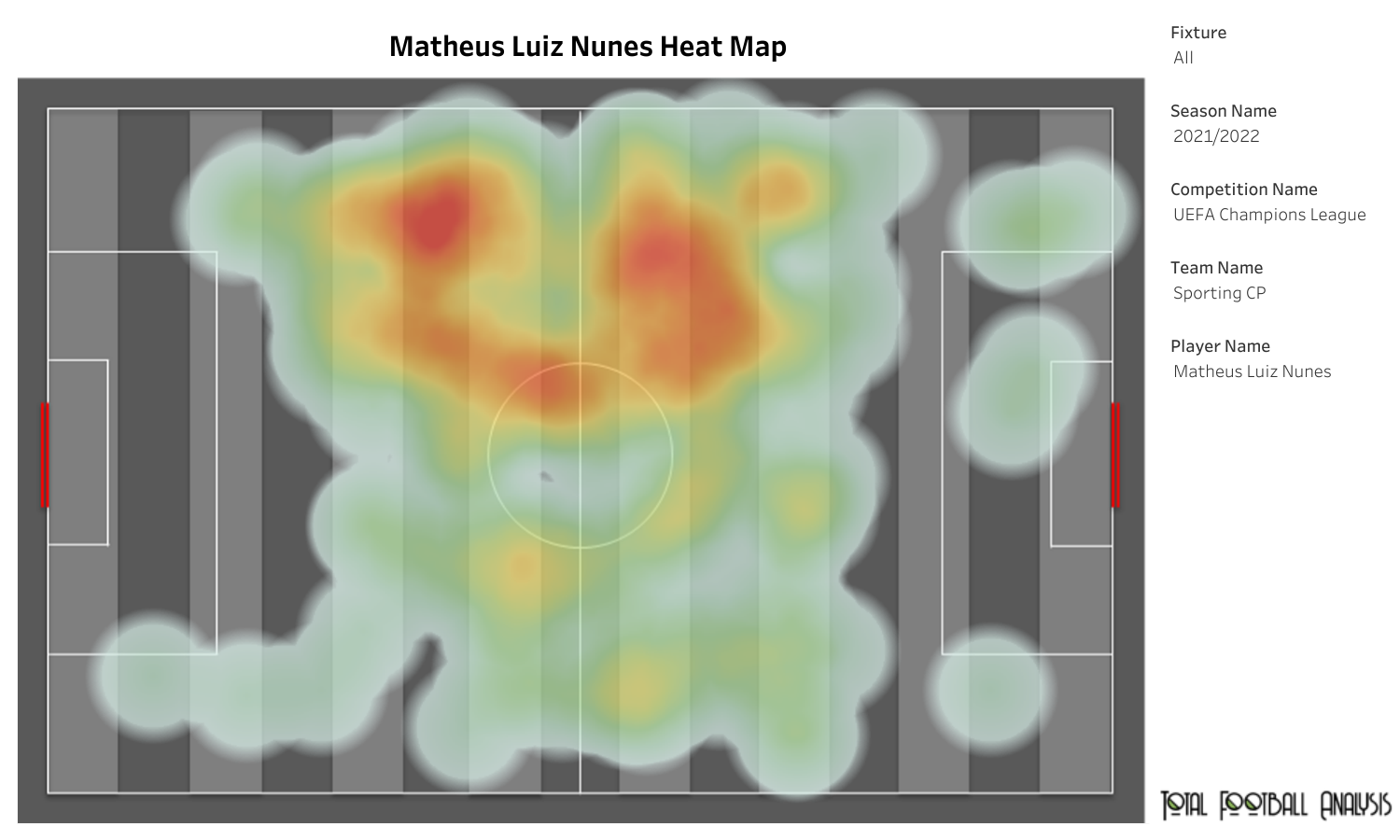 In all competitions, the 23-year-old made 49 appearances for the Portuguese club. He started in 43 matches and scored four goals, along with four assists. The above viz shows the heat map of the player from his six UEFA Champions League appearances. He failed to score a goal in his first appearance in the competition but was the man behind setting up two goals for his teammates. The above viz shows that Nunez played towards the left side of the midfield. He maintained his position and allowed the other players to make forward runs. 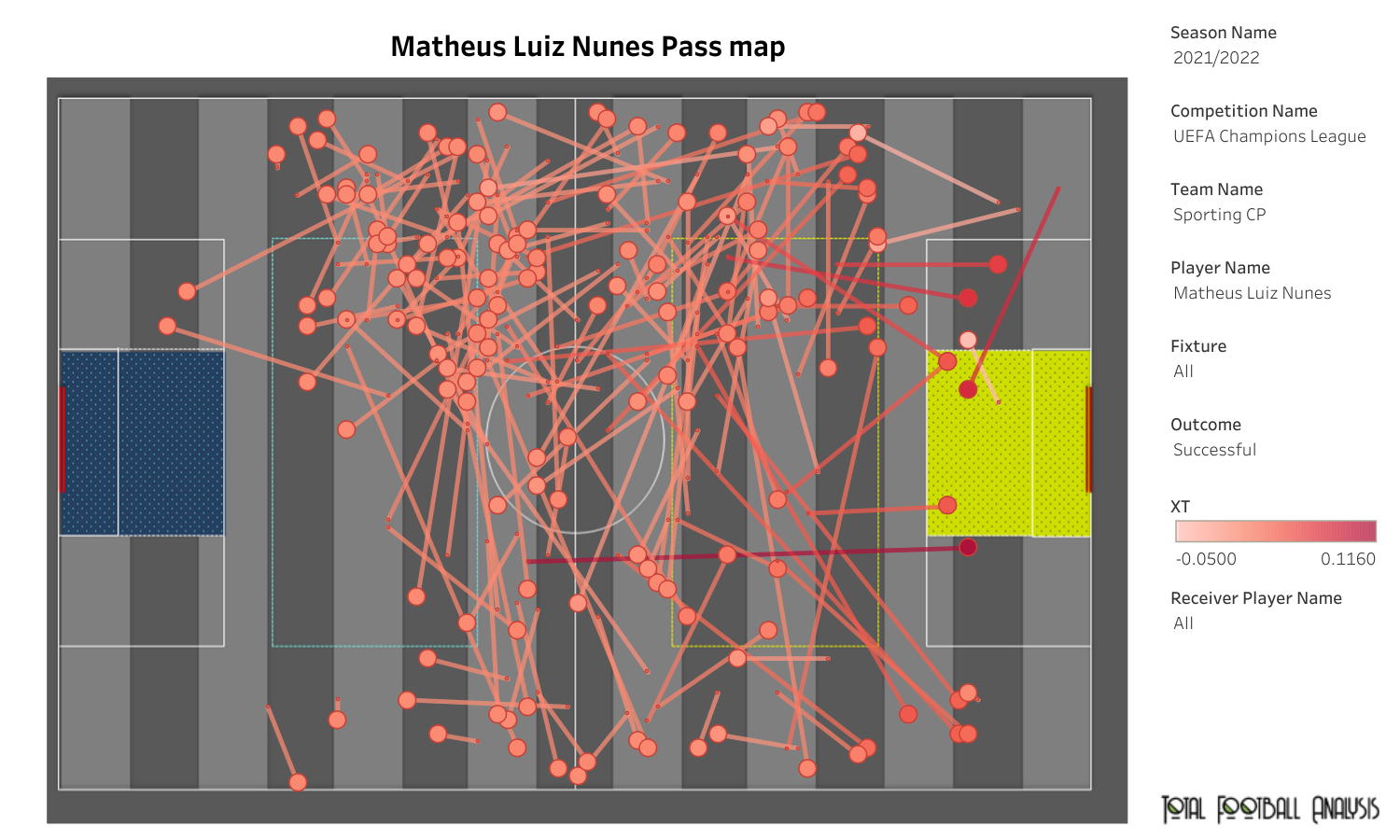 Nunez averaged 31.9 passes per 90 minutes with an accuracy rate of 81.25%. The above viz shows all the successful passes that were delivered by the midfielder. He averaged around six passes into the attacking third per 90 minutes but had a low success rate of 61.1%. By looking at the above viz, we can observe that Nunez can provide some dangerous passes into the opposition’s penalty box and create chances for his teammates. He averaged more than one smart pass and one through pass per 90 minutes. Most of the passes directed by the midfielder were towards Pedro Porro, who played as the right wing-back.

Other than this, Nunez was involved in 7.15 attacking actions and had a 53.5% success rate. The midfielder tried to dribble past the opposition players on 34 occasions and beat them 53% of the time. 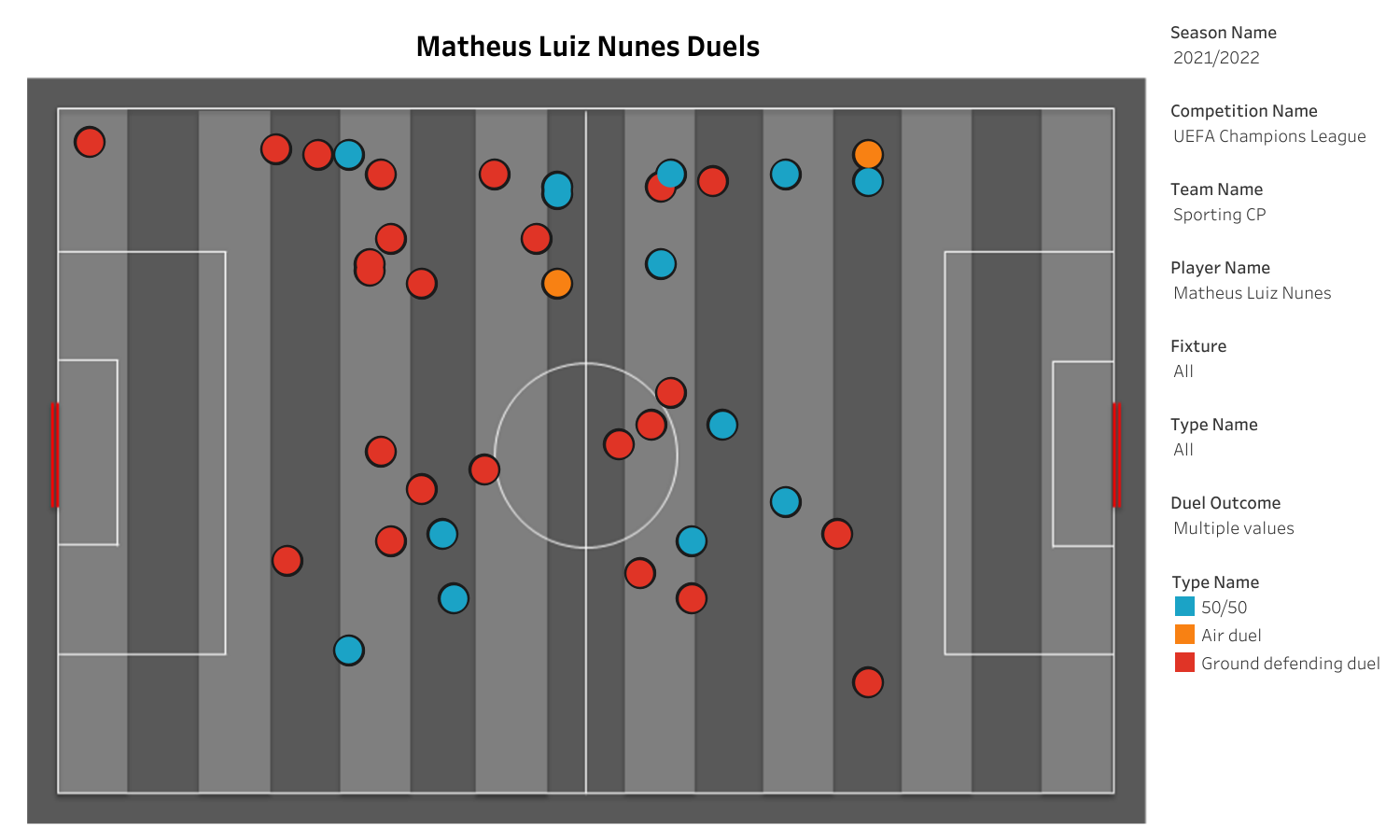 The midfielder made some crucial defensive contributions from the midfield and tried to stop the opposition’s attacks. Nunez was involved in 11.3 defensive actions per 90 minutes and had a success rate of 80.9%. The above viz shows that Nunez won most of his duels inside the middle third. He averaged seven defensive duels, one aerial duel, and 4.5 loose ball duels per 90 minutes. The player won 21.43% of defensive duels, 33.33% of aerial duels, and 40.74% of loose ball duels. Other than this, Nunez made 24 interceptions, along with 30 recoveries.

Matheus Nunez might have struggled to score goals, but he was equally good at passing the ball and defending for his team. The player is still learning, and a move to Chelsea could open a lot of doors for him. He could learn a lot under Thomas Tuchel and replace N’Golo Kante in the future. The player is wanted by Chelsea in the summer.