Arsenal are planning to bring back Leroy Sané to the English Premier League. Sané made the switch from Manchester City to Bayern Munich in 2020. He is one of the top-rated wingers in football and has set high standards for himself. Sané started his career with the German club, Schalke 04, before making a transfer to Manchester City. Pep Guardiola played a crucial role in signing the German international. Manchester City are a team full of star players, and the manager likes to shuffle his team a lot. This limited his game-time on the field, and he opted to leave the English club for the biggest club in his country. He is now being linked with several clubs following the signing of Sadio Mane, who also plays on the left side. Sané is a speedy winger and some of the stats from the UEFA Champions League show why Arsenal and other English Premier League sides have shown an interest in the winger. 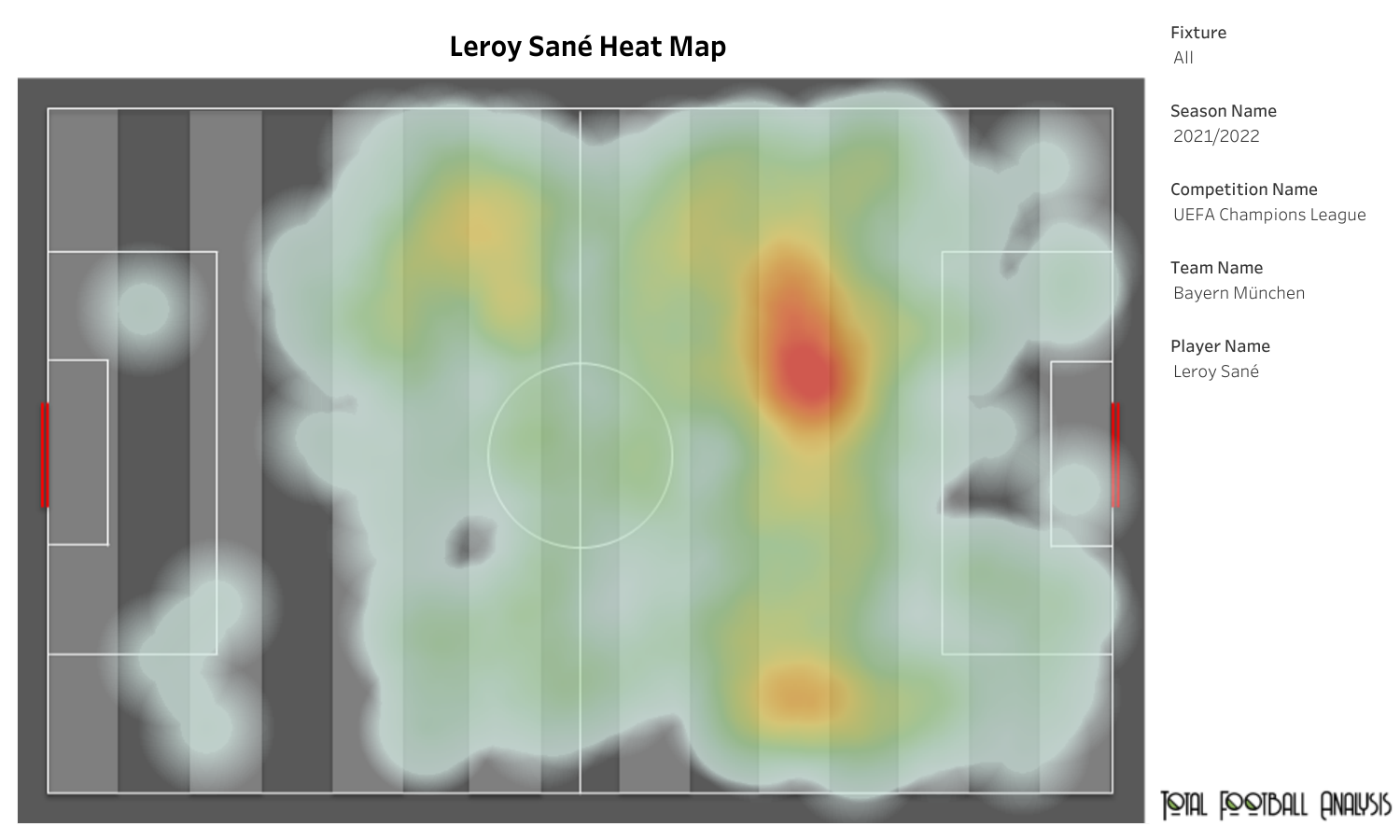 Sané is a left-footed left-winger who likes to stretch the opposition defence and deliver passes into the opposition’s penalty box. The 26-year-old made 44 appearances in all competitions last season, including 33 starts. Sané scored 14 goals along with providing 14 assists. The above viz shows the heat map of the player in ten appearances in the UEFA Champions League last season. Leroy Sane was able to find the back of the net six times and also helped his teammates score six goals. The heat map shows the player also featured on the right side of the elite competition for the German club. He showed a bit of versatility and had a lot of impact on the games. 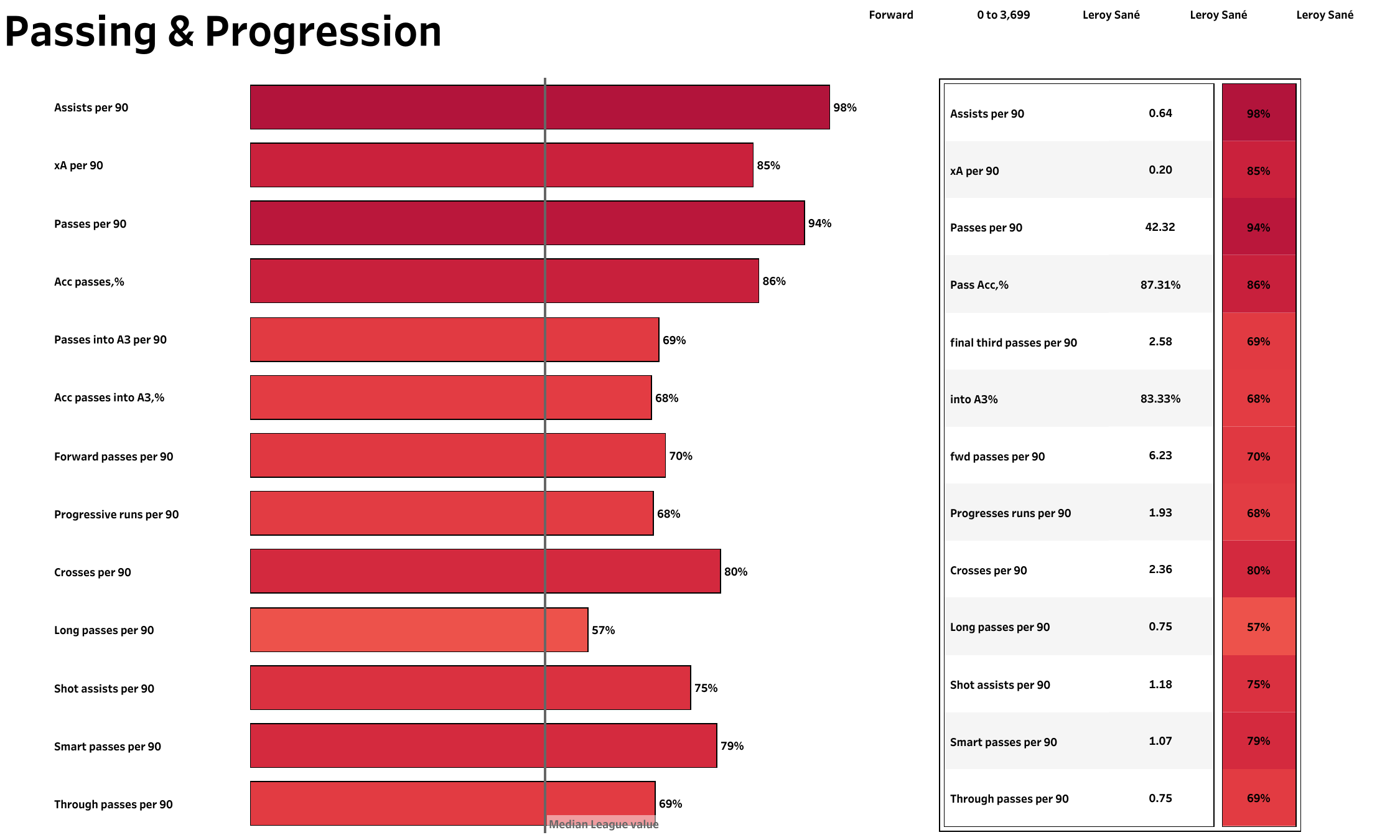 The above viz shows the passing stats of the player in the UEFA Champions League. When looking at the above chart, the general rule is that the longer the bar, the better the performance — you can see the league average in the middle, and the % is the percentile rank the player is in. The German international had a high percentile rank for every stat mentioned in the above chart. Sané averaged 42.3 passes with an accuracy rate of 87.3%. He also averaged more than two crosses per 90 minutes and found his teammates more than ten times inside the opposition’s penalty box. This shows that Sané is very effective with his passing. 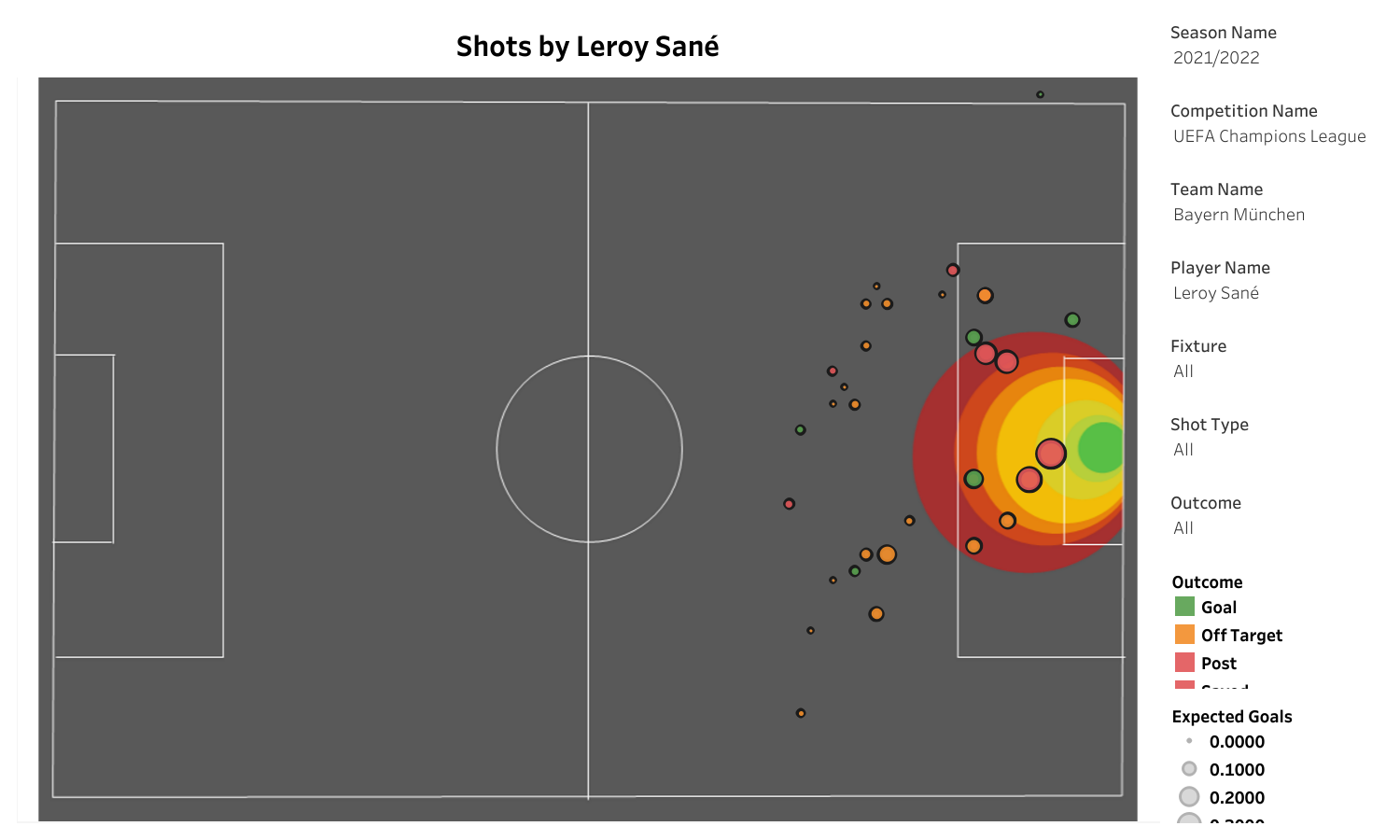 Sané was involved in 11.9 attacking actions per 90 minutes and had a 45% success rate. He averaged 3.44 shots per 90 minutes with an accuracy rate of 37.5%. The above viz shows the shot map of the player, and we can observe that Sané likes to attempt shots from a long distance. He is also good with free kicks and can score goals. Sané scored three goals from inside the opposition’s penalty box and three from outside the box.

Arsenal are looking to sign a world-class winger. Leroy Sané is a goal scorer and offers a lot of creativity. He is unlikely to leave Bayern Munich as he is their future and will play a crucial role in their quest for another Bundesliga and UEFA Champions League title. If a team is willing to sign him, then they will have to offer a huge amount to Bayern Munich.