Frank Lampard is looking to improve the defensive line for Everton and is after some of the players who could stop the Toffees from leaking goals like they did last season. They have a defence comprising of young players, and some of their defenders suffered injuries which kept them out for most of the season. Now, they have the option to buy players and are focused on getting talent from other clubs. One of the players that has emerged as their target is Spurs defender, Japhet Tanganga. Tottenham Hotspur have filled in the defensive spots for next season and are looking to offload the 23-year-old either on loan or on a permanent transfer. The versatile centre-back is on the wishlist of English Premier League clubs as well as some of the top European clubs like AC Milan and Napoli. Tanganga featured regularly in the first half of the season for Spurs, but an injury in January limited his game-time. Now, the player is fully fit and looking to spend more minutes on the pitch. Some of the stats from last season show why the clubs have shown a lot of interest in the youngster. 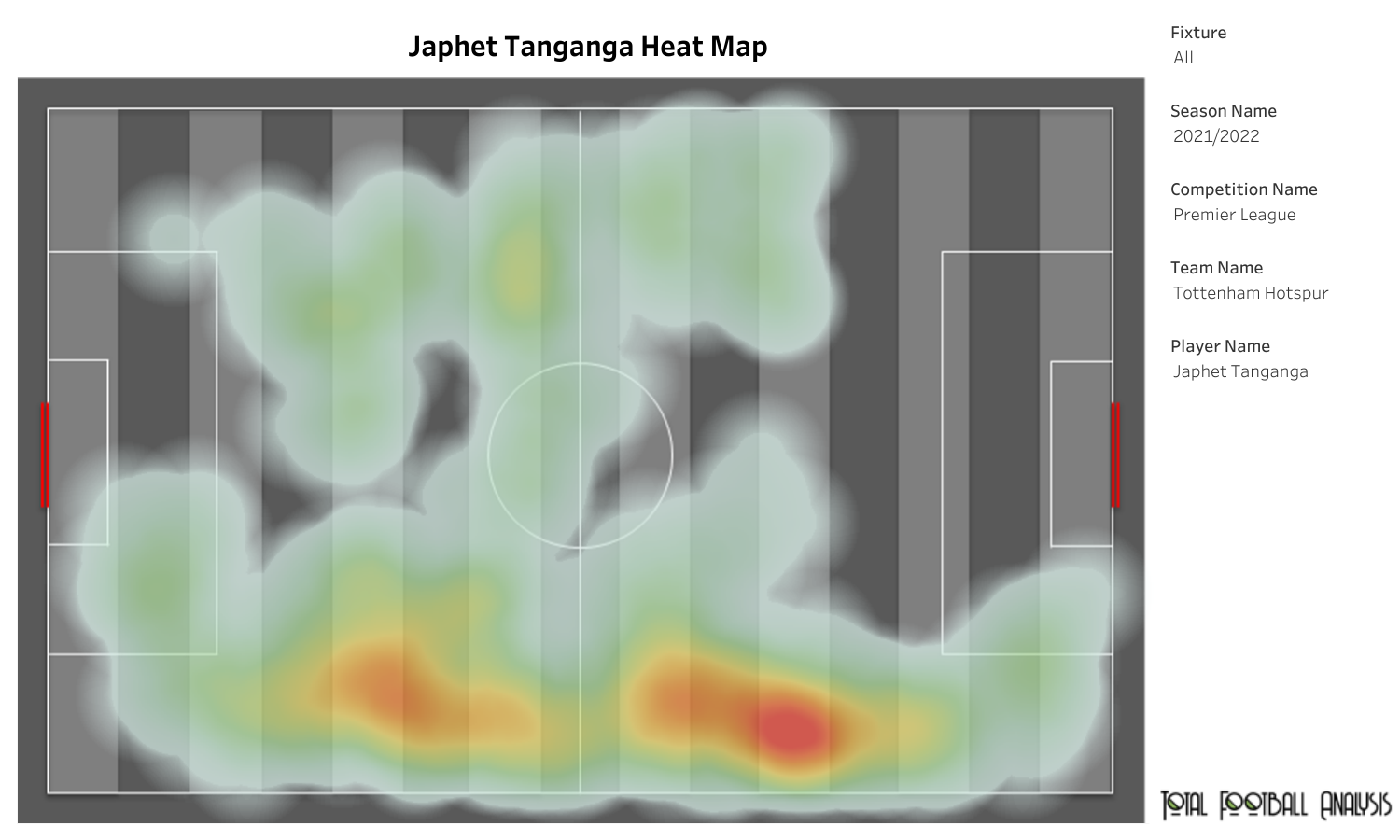 Last season, Tanganga made 11 appearances in the English Premier League for Spurs. He started in ten matches and was featured as a right centre-back and right-back. The above viz shows the heat map of the player. Tanganga played a high line when he was used as a full-back and supported the wing-back when he featured in the right centre-back role. One of the issues with Tanganga last season was that he received three yellow cards and a red card in just 11 appearances.

Tanganga averaged 40.1 passes per 90 minutes with an accuracy rate of 86.2%. He was unable to create a lot of threats with his passing. The player also attempted five shots but failed to score a goal with two shots on target. 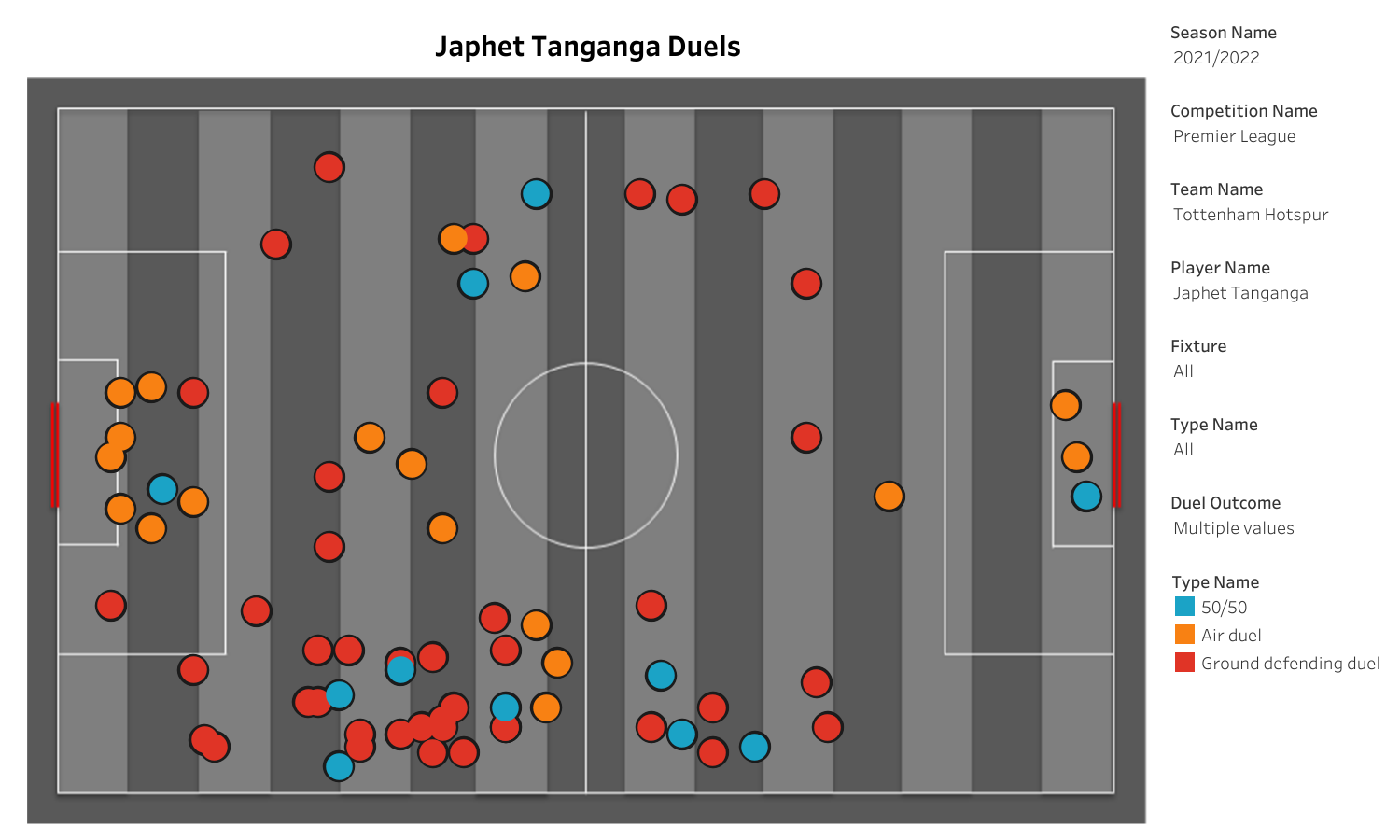 Defensively, the defender was involved in 15.3 defensive actions per 90 minutes with a low success rate of 69.9%. The 23-year-old averaged 9.9 defensive duels, 3.3 aerial duels, and 2.07 loose ball duels per 90 minutes. His success rate was 18.6% for defensive duels, 58.5% for aerial duels, and 44.44% for loose ball duels. The above viz shows that the player won most of the duels inside his team’s half. He is also strong in the air and won a few aerial duels inside the two penalty boxes. 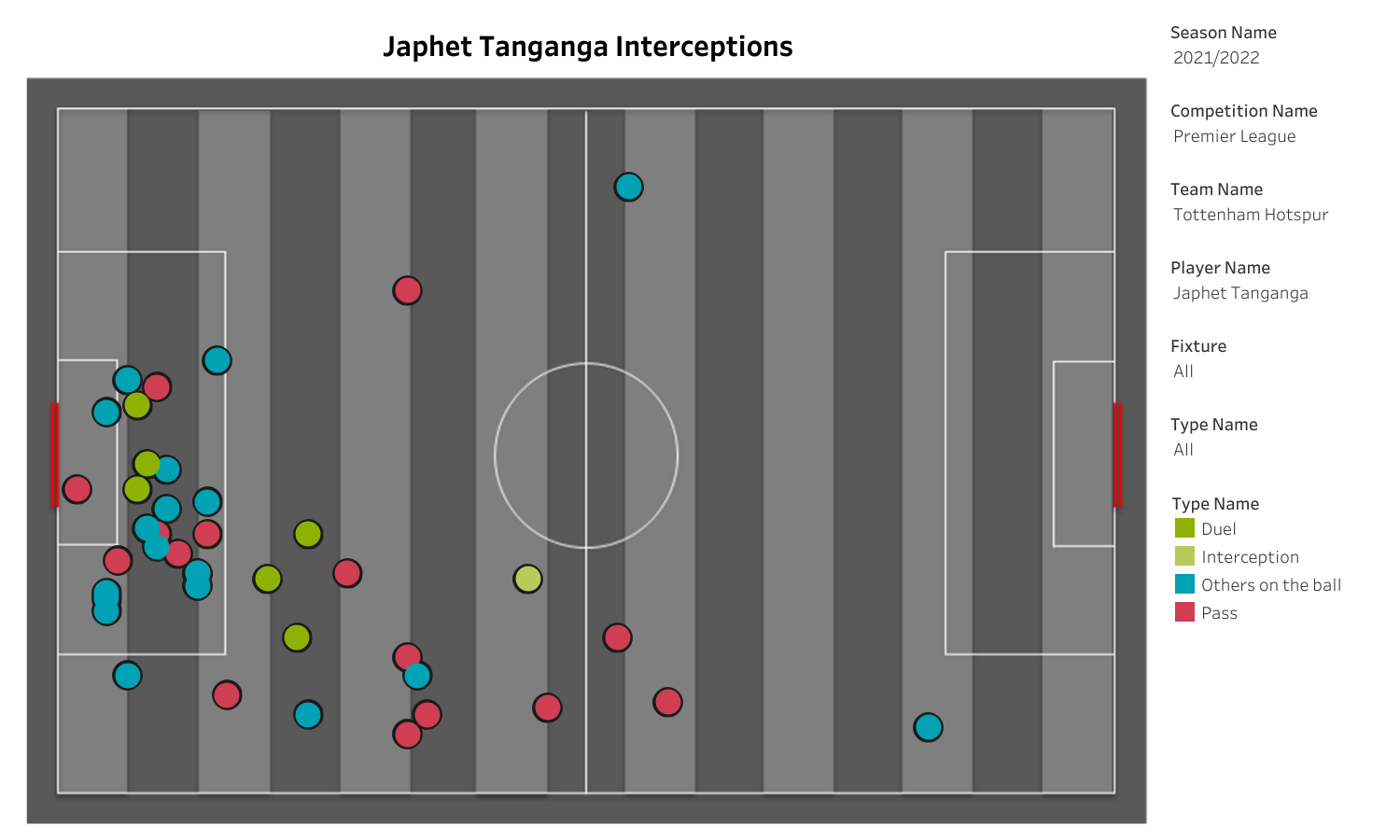 The Englishman averaged 4.7 interceptions per 90 minutes, and most of them were made inside his team’s penalty box. Most of the interceptions were made when other players were on the ball, followed by the passes intercepted.

In the 2020/21 season, Tanganga played six English Premier League games and was involved in 12.7 defensive actions with a 71.2% success rate. He had a better ‘duels win percentage’ and made more recoveries. The player showed some improvements and would look to improve his stats in the upcoming season.

Japhet Tanganga is a versatile player who can play as a centre-back and as a right-back. Spurs will allow him to leave on loan to gain more experience and might sell him if they get the right price. The defender has to work on his disciplinary issues and contribute more to the defensive side. Everton are in search of a defender, and Tanganga could be a good addition to their squad. However, they are facing a lot of competition to sign him and might have to work hard to get him to Merseyside.