Tottenham Hotspur have supported Antonio Conte with the funds required for his squad rebuilding this summer. They have signed Fraser Foster from Southampton, Djed Spence from Middlesbrough, Clement Lenglet from Barcelona, Yves Bissouma from Brighton, Ivan Perisic from Inter Milan and Richarlison from Everton. As far as the outgoings are concerned, they have sold Cameron Carter-Vickers to Celtic and Steven Bergwijn to Ajax. However, some reports claim that Spurs are not done yet, and they have set sights on Leicester City midfielder, James Maddison. Should he come to the Tottenham Hotspur stadium, what would he bring to the team? 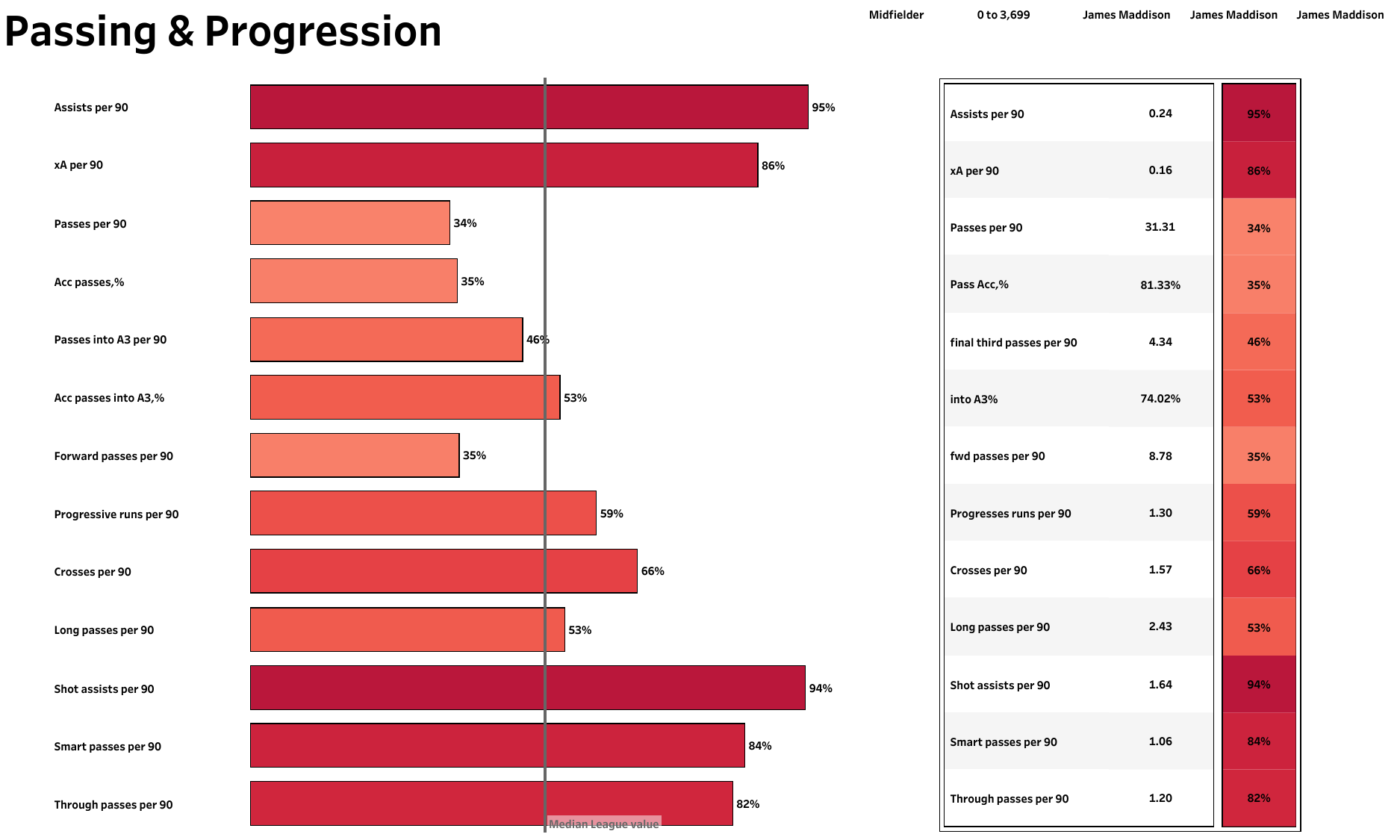 In addition to his 12 goals, Maddison provided eight assists. His rate of assists per 90 was 0.24 per 90, high enough to be in the top 5%. This was also better than what xA per 90 estimated. He was not that active in the build-up play as he completed only 25 passes per 90, placing him in the bottom third among midfielders. He made 1.3 progressive runs per 90 and completed 1.57 crosses per 90, both of which rank him in the upper 40%. With 1.64 shot assists per 90 to his name, the Englishman was placed in the 94th percentile. He also completed 1.06 smart passes per 90 and 1.2 through balls per 90. 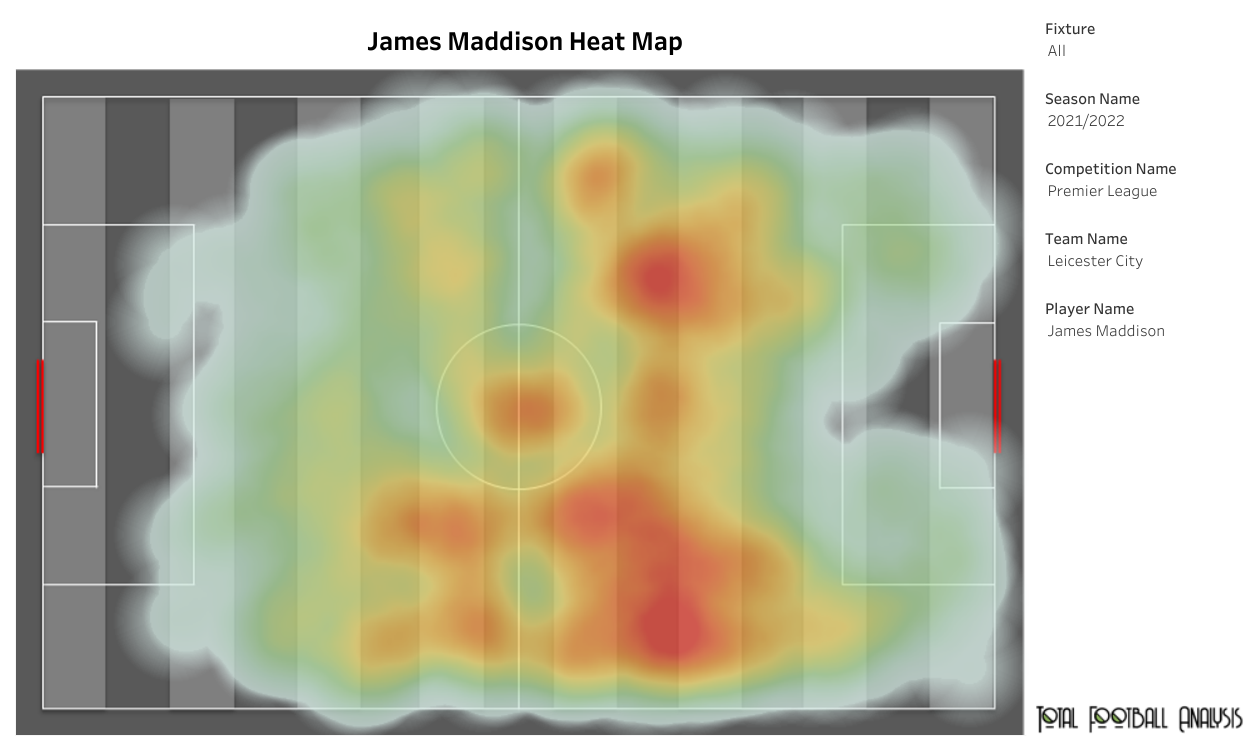 As an attacking midfielder, Maddison was mostly involved in the hole between the midfield and attack. He also tended to drift wide towards the flanks, more so to the right wing than to the left. He completed 3.81 progressive passes per 90, 1.58 key passes per 90, 1.28 passes into the penalty box per 90 and 5.49 progressive carries per 90. Additionally, he received 5.35 progressive passes per 90. Defensively, he attempted 18.2 pressures per 90 (of which 4.18 were successful) and 2.38 tackles & interceptions per 90. 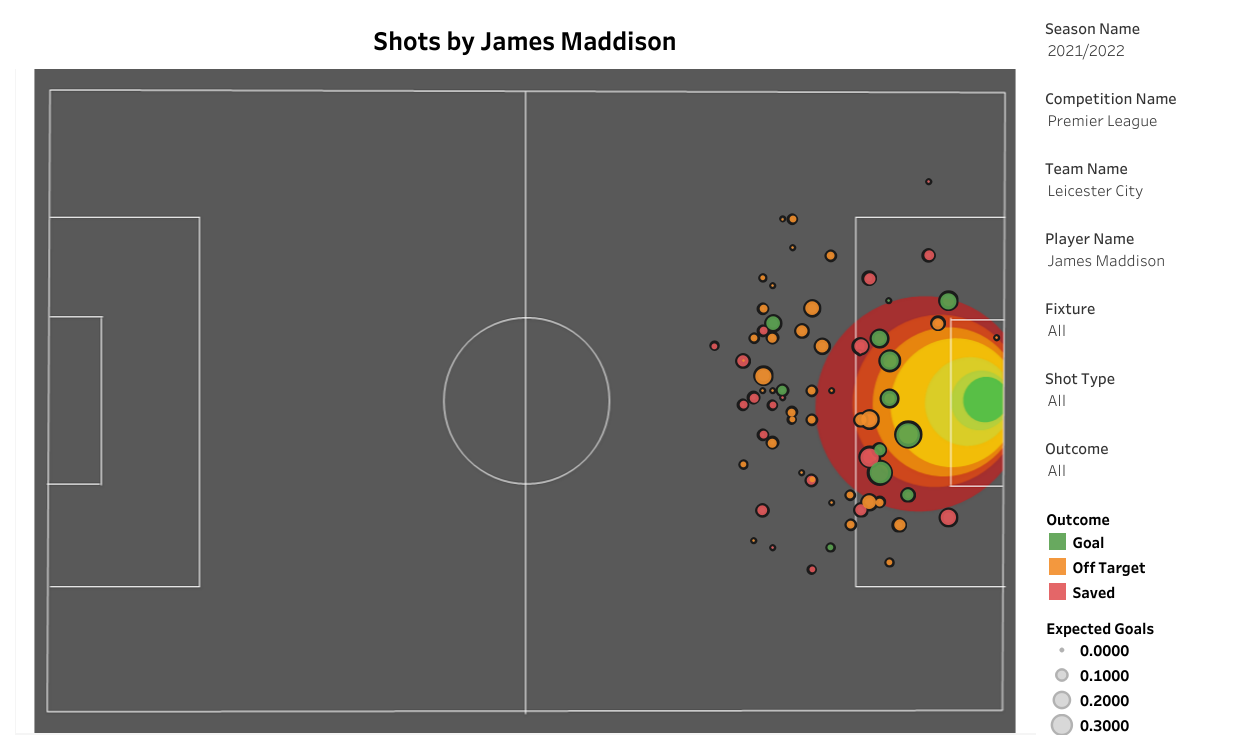 Three of Maddison’s 12 goals last season came from outside the box. What is even more impressive is that not one strike was from the penalty spot. He attempted quite a big chunk of his shots from outside the box. Overall, he attempted 73 shots, taking his shot conversion rate to 6.08 shots per goal scored. His average shot distance was 19.8 yards, which actually fell from 23.9 yards in the season prior to the last.

James Maddison has vastly overperformed on his xG and xA during his time at Leicester City. He adds creativity to the midfield department which Rodrigo Bentancur, Pierre Emile Hojbjerg and Yves Bissouma are not really known for. However, Spurs will need to pay well over the odds if they are to acquire the former Norwich City man.

The post Transfer Talk: James Maddison – Why are Spurs linked to the Leicester City midfielder? appeared first on Football analysis, news, betting and opinion from Spurs.