Everton are already looking for options to strengthen their squad after a disappointing English Premier League 2021/22 season. The Toffees escaped relegation on the second-last weekend of the competition. Frank Lampard will look to keep these things aside and start the new season with a better plan and new players in the team. One of the players that has emerged as a target for Everton is Watford forward Ismaila Sarr. Watford were relegated from the English Premier League, and Sarr will be looking for a move away from the club. He was already on the transfer radar of many clubs, and Everton have also joined the battle to acquire the services of the Senegalese international. Here are some of the stats that will highlight his performances from the 2021/22 season. 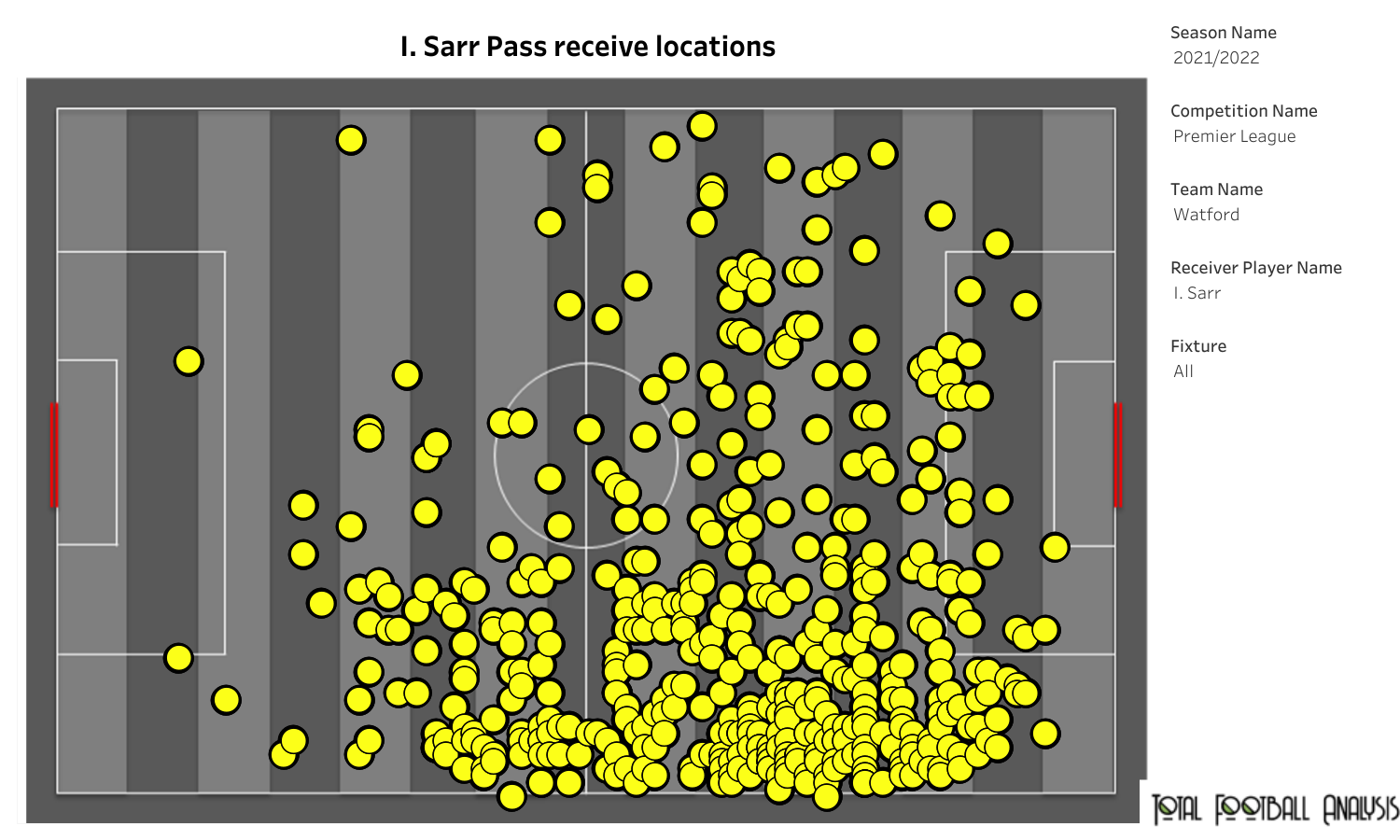 Sarr features on the right side, and Everton have few options on that side. Andros Townsend was injured towards the end of the season, and Frank Lampard tried different players in that position. With Ismaila Sarr being a natural right-sided attacker, he could easily get a place in the starting XI. The player was unlucky this season as he only made 22 appearances and missed the other 16 matches due to an injury. He scored five goals and provided two assists. The above viz shows the pass starting location of the 24-year-old. He had 60 touches inside the opposition’s penalty box throughout the season. 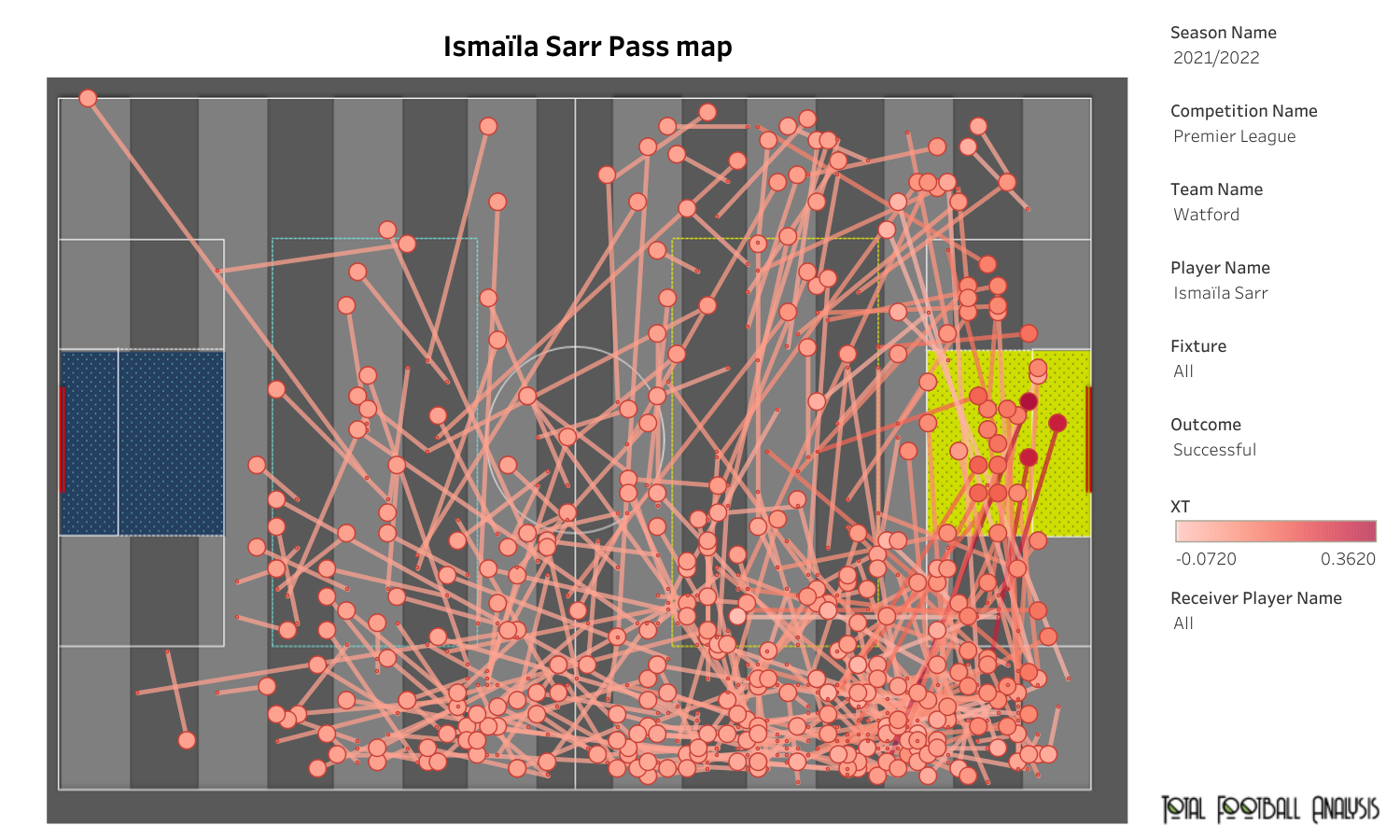 The above viz shows all the passes that were successfully delivered by the forward. Most of the passes involved link-up play, and Sarr delivered some crucial passes into the opposition’s penalty box. Most of his passes were towards right-back Kiko Femenia. The highest threat was created by the passes attempted toward Emmanuel Dennis. With Richarlison on the left and Dominic Calvert-Lewin through the middle, these three can create a lot of threats with their pace and skills on the ball. Dominic Calvert-Lewin heads the ball well, and Sarr has the ability to provide crosses in the right areas.

The 24-year-old attempted 36 shots throughout the season and managed to hit the target 16 times. He scored five goals, each from the right side. The player likes to cut inside and attempt his shots. He has also taken a few positions in front of the goal and has scored on one occasion from inside the opposition’s 6-yard box. 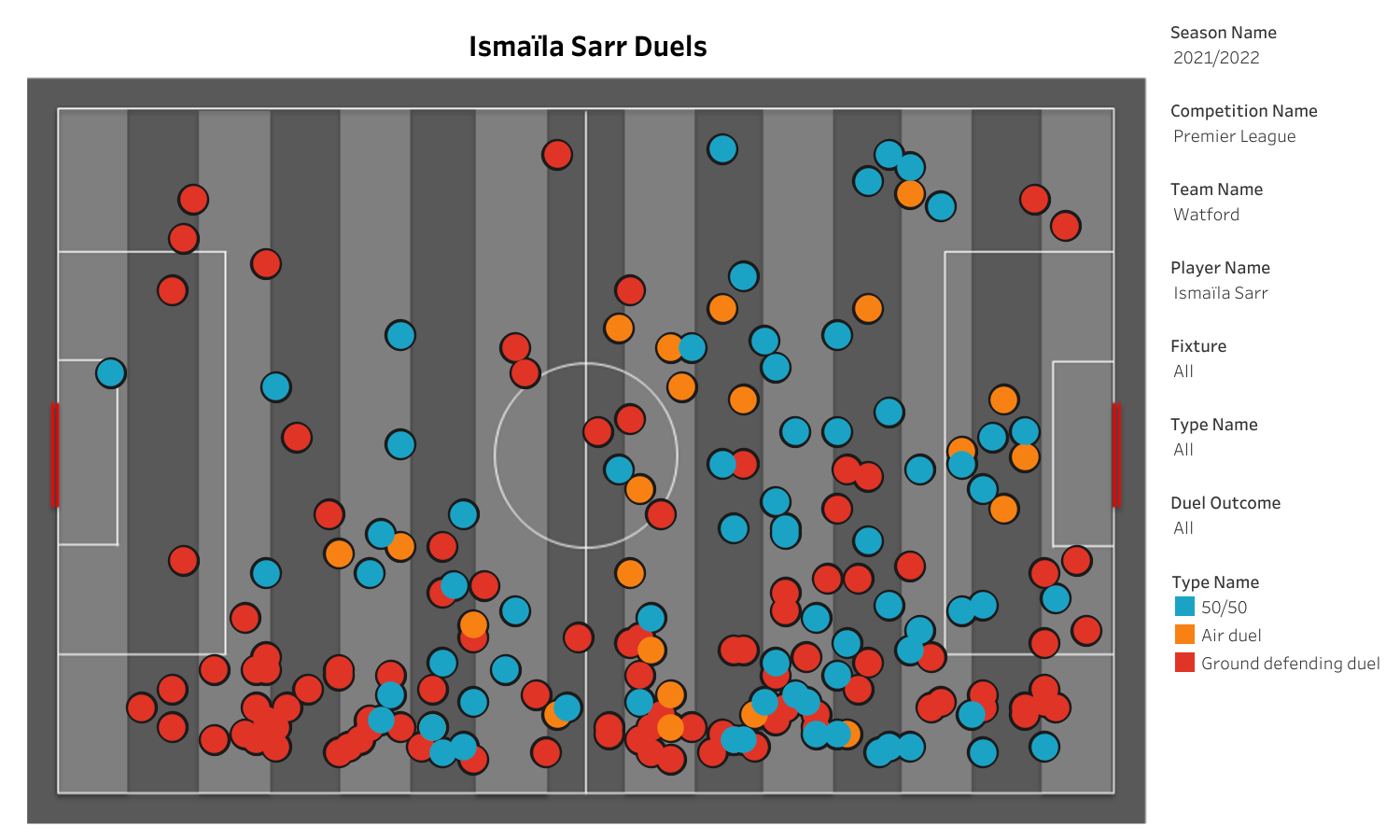 Ismaila Sarr can score and create goals for his team. He has impressed everyone in the last few seasons, and this was probably his last season at Watford. Everton will face competition from a few other English Premier League clubs to sign the youngster. He could be a good addition to the Everton squad and would be a threat from the right side.