With Burnley’s future in the Premier League in danger, it has been claimed that James Tarkowski is set to leave Turf Moor in the summer after declining a contract extension. Leicester City are among the host of clubs interested in the signature of the centre-back. The Foxes reportedly attempted to sign Tarkowski back in 2020, but the bids fell short of Burnley’s evaluation. However, this time around, a deal could go through as Tarkowski has decided to run down his contract.

The Foxes’ defensive issues have been well documented this season. Underperformance and the unavailability of first-choice defenders were the main reasons why Leicester looked weak at the back. Brendan Rodgers, who has highlighted his side’s troubles in defending in the final third, is believed to be interested in bringing a left-sided centre-back. Often this season, Leicester have fallen behind despite conceding fewer shots because they failed in blocking the shots or making clearances near the edge of the box.

Tarkowski may not be in the mould of defenders that the Northern Irish manager prefers – an aggressive defender who presses high and contains the opposition strikers in their half. However, the 29-year-old’s style of play could be attributed to the way that he is asked to play at Burnley. Although it is difficult to judge whether Tarkowski would be suitable to partner Wesley Fofana on the left side of the defense, the fact that the 29-year-old is available on a free transfer could make Leicester consider a deal.

Let’s take a look at some stats to gauge whether Tarkowski could be a suitable replacement for Rodgers’ backline. 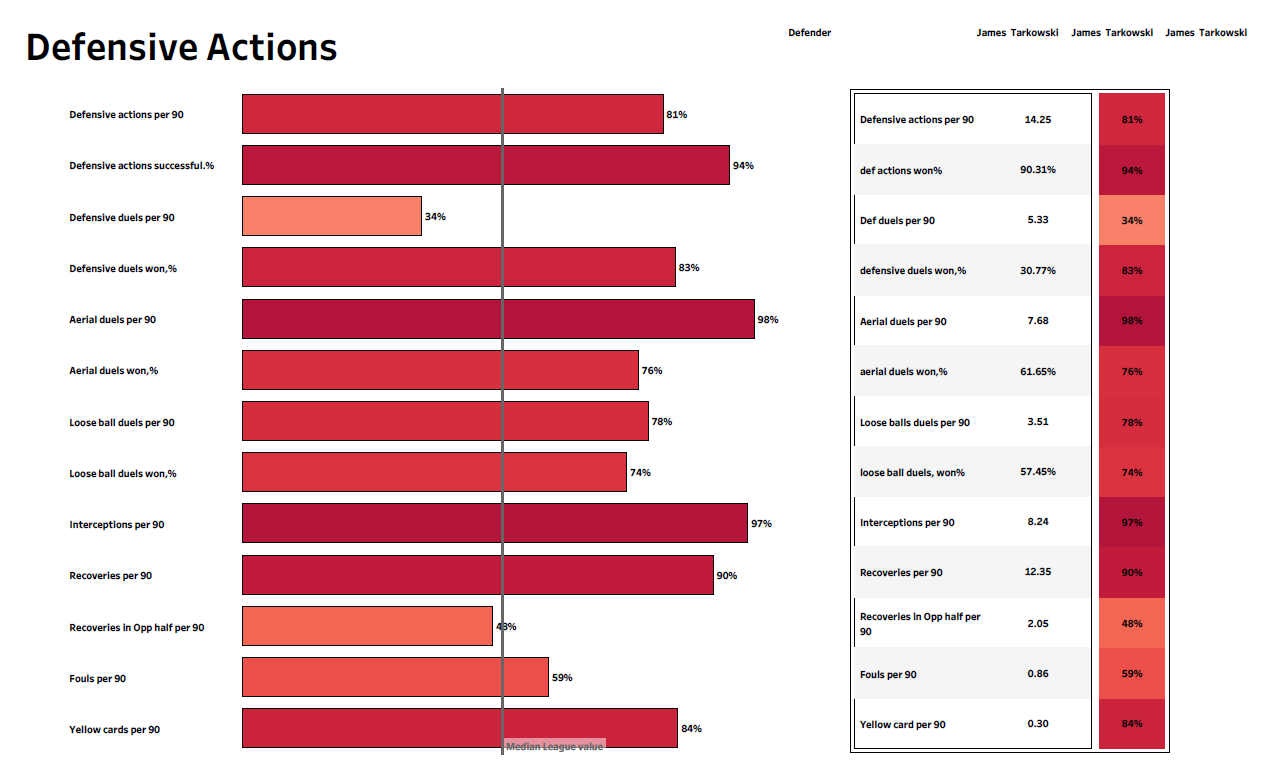 We can see Tarkowski’s defensive stats in the above viz. The majority of his stats surpass the league median, and the 30-year-old has ranked highly in terms of defensive actions successful, aerial duels per 90, interceptions per 90, and recoveries per 90. Tarkowski has averaged 8.24 interceptions per 90 and 12.35 recoveries per 90. Although some of his high defensive numbers could be attributed to Burnley’s style of play, Tarkowski displays impressive awareness and positioning on the pitch. He utilizes his huge frame to great effect and wins most of the aerial duels that he engages in. 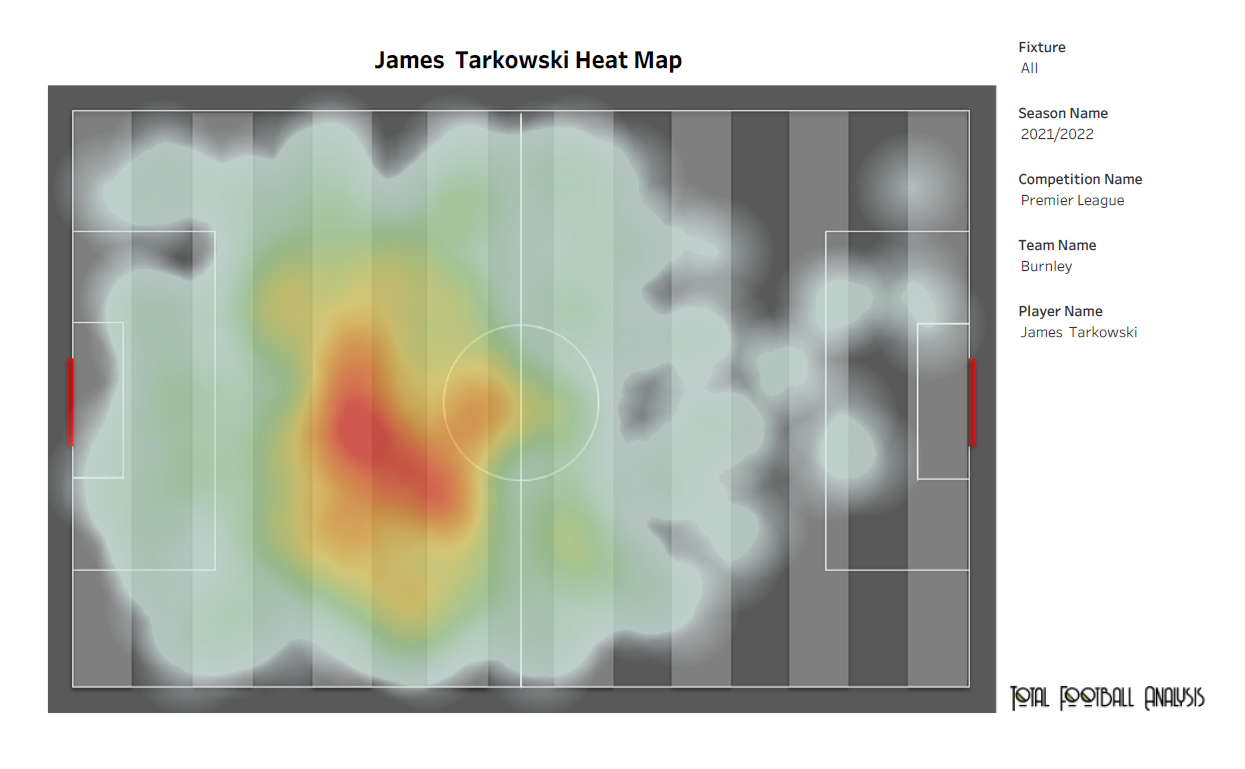 In the above viz, we can see Tarkowski’s area of activity on the pitch. At Burnley, Tarkowski features as a right or a left centre-back. The Claret’s 4-4-2 formation attempts to congest the midfield, and they often play with a low block. This situation makes the opponents utilize the spaces available in the wide areas, from where they can ping crosses into Burnley’s box. This forces Tarkowski and his centre-back partner into action, and they deal with the crosses with good effect. The 29-year-old positions himself between the near post and the penalty area, where he can anticipate the cross and attempt to clear it. 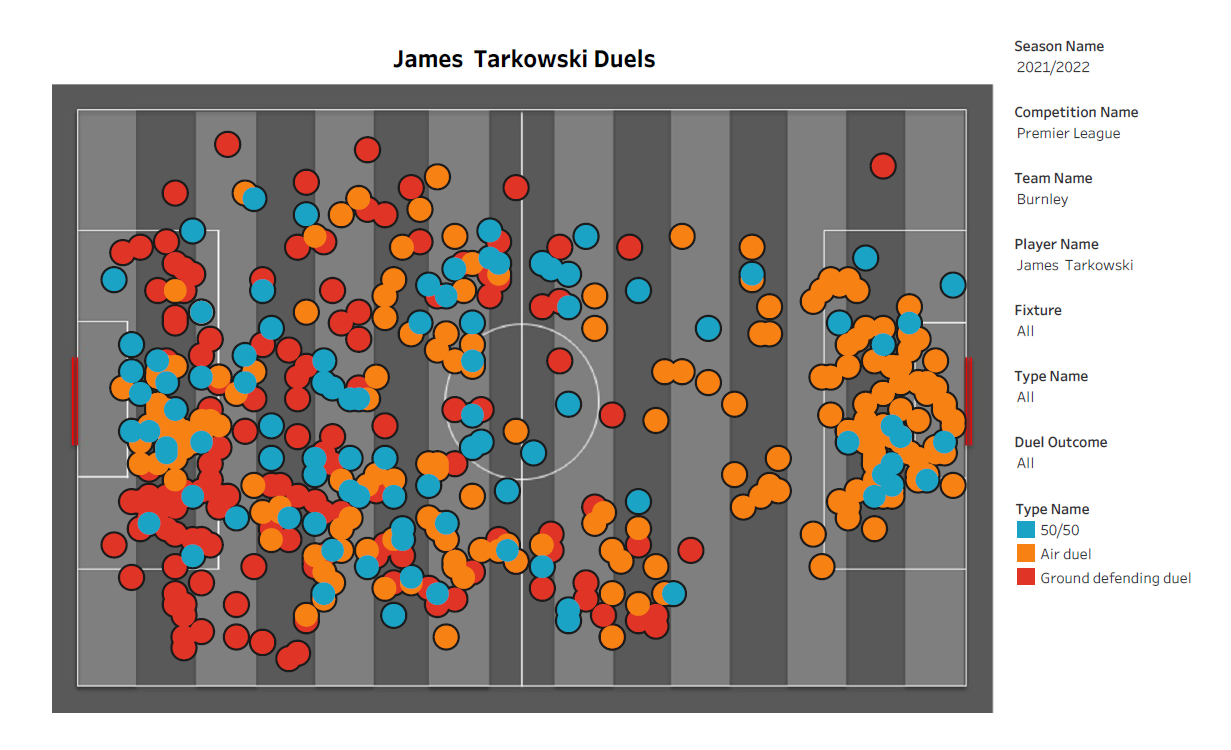 The above viz. highlights the locations on the pitch where Tarkowski has been involved in defensive and aerial duels. Tarkowski is heavily involved in defensive and aerial duels all over the pitch. The 29-year-old gets a high number of clearances as well as blocked shots due to his accurate positioning and anticipation of where the ball is going to end up. Another one of his most excellent attributes is his aerial threat during the set-pieces.

While he may not have some of the attributes that Rodgers prefers in his centre-backs, Tarkowski is a reliable defender who excels at several defensive attributes. It would be interesting to see if the 29-year-old could adapt to the vastly different nature of Leicester’s play if a deal does go through.