Manchester United’s pursuit of signing new players continues as the Red Devils are looking to boost their midfield after the departure of Paul Pogba and Nemanja Matic. Erik ten Hag is looking to rebuild the team and add fresh names to his squad. He is targeting Frenkie de Jong from Barcelona as the midfielder has already played under him and knows his tactics. However, it wouldn’t be easy for Manchester United to persuade the defender as they are not playing in the UEFA Champions League, and the Dutchman has no intention of leaving the Spanish club. Manchester United are still after the midfielder but are also looking for other options. One of the players on their wishlist is PSV midfielder, Ibrahim Sangare. The 24-year-old has played against Erik ten Hag’s Ajax side, and the manager is also interested in bringing the Ivory Coast midfielder to Manchester. 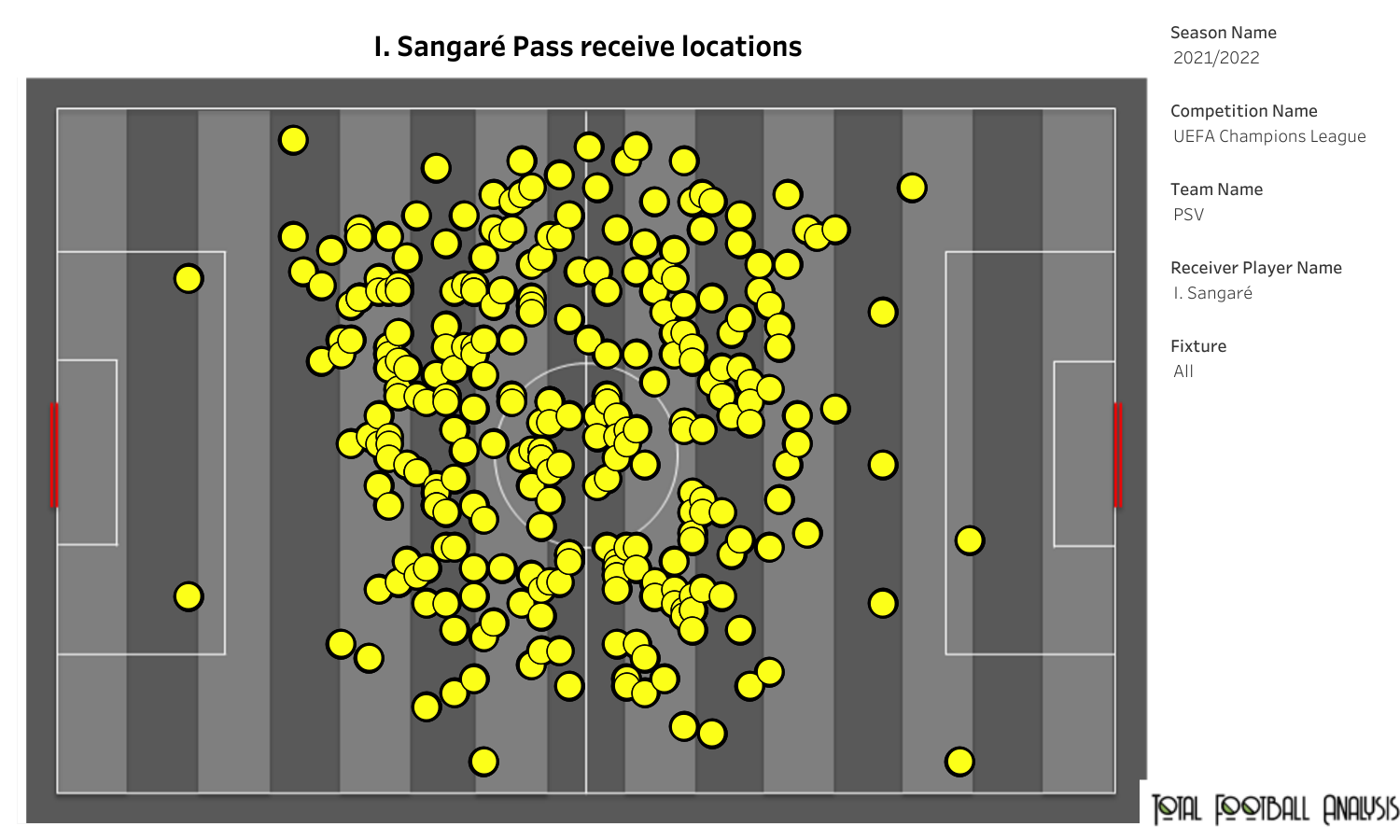 The 24-year-old midfielder joined PSV from French club Toulouse in 2020. Since then, he has been a regular member of the Dutch national team squad. Last season, PSV failed to qualify for the UEFA Champions League group stage as they lost to Benfica in the qualification stage. However, the midfielder was ever-present in the midfield and represented his side in all the six qualifying games. He plays as a central midfielder, and the above viz shows his pass receiving location. We can observe that the player has received more than 90% of the passes in the middle third. He likes to make full use of the field and has received passes in the centre, left and right sides. 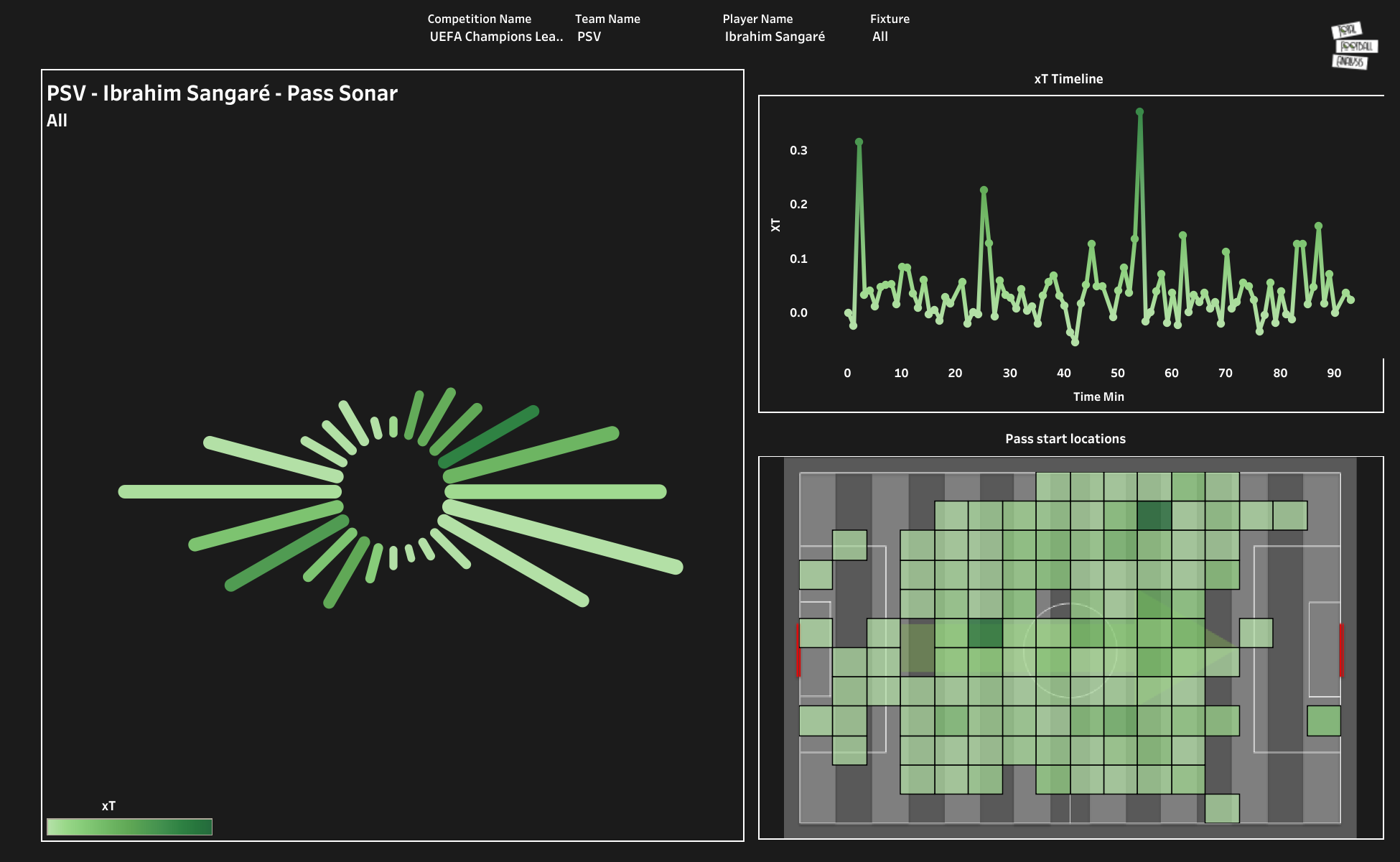 The pass start location shows that the player has gone deeper and attempted a few passes from inside the opposition’s penalty box. The midfielder failed to contribute towards scoring goals, but he scored three goals and gave two assists in the league. He averaged 63.7 passes per 90 minutes with an accuracy rate of 88.7%. A total of 8.92 passes per 90 minutes were attempted into the attacking third with a high accuracy rate of 75%. He likes to dictate the play by holding his position and distributing the ball to different areas of the pitch. 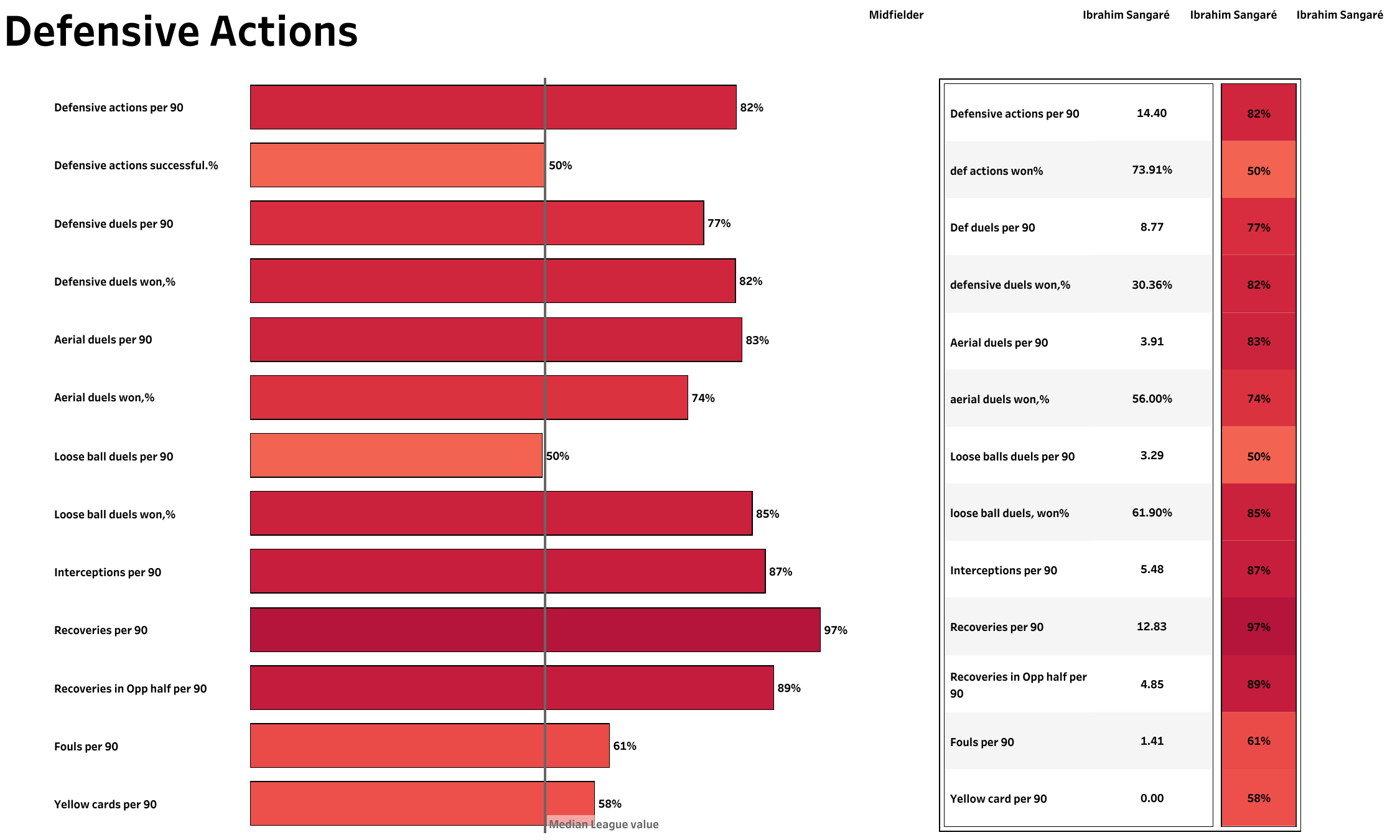 Sangare impressed with his defensive contributions to his side. The midfielder was involved in 14.4 defensive actions and had a success rate of 73.91%. When looking at the above chart, the general rule is that the longer the bar, the better the performance — you can see the league average in the middle, and the % is the percentile rank the player is in. He contested more than eight defensive duels per 90 minutes and had a high success rate in comparison to the other midfielders. The player also had a high win percentage for aerial and loose ball duels. Sangare averaged 5.48 interceptions per 90 minutes and had a very high recovery rate.

Manchester United need a midfielder who could provide them with defensive stability and allow the other players to create threats towards the opposition goal. Ibrahim Sangare could be a perfect fit as the player has a good defensive record and can deliver passes that can link up play between the defence and the attack. He could turn out to be a bargain, but Manchester United are facing competition to sign the midfielder. The player could be on the move away from PSV in the summer.

The post Transfer Talk: Ibrahim Sangare – The PSV midfielder could turn out to be a bargain for Manchester United appeared first on Football analysis, news, betting and opinion from Man United.