Benfica striker Darwin Nunez is ‘dreaming’ of a summer move to Manchester City. Nunez, 22, has been in outstanding form for Benfica this season, scoring 26 goals and providing two assists in 33 appearances across all competitions. The Uruguayan international has taken his game to the next level, attracting the attention of several clubs across Europe.

Last year, Nunez joined Almería as the second-most expensive signing in their history. This year, Nunez left Almería as the most expensive sale in their history. Darwin started his senior career at Montevidean giants Club Atletico Penarol, five-time winners of the Copa Libertadores. Nunez is a stand-out player on any football field. His athletic frame is what sets him apart. His athletic skill set is characterized by his excellent acceleration and sprinting speed. He has an explosive change of pace that allows him to create space. He can cover ground quickly with longer strides and outrun the majority of defenders in a foot race. He has the strength to withstand body-to-body challenges, and his athleticism is game-changing, supported only by quick movement and intelligent instincts. 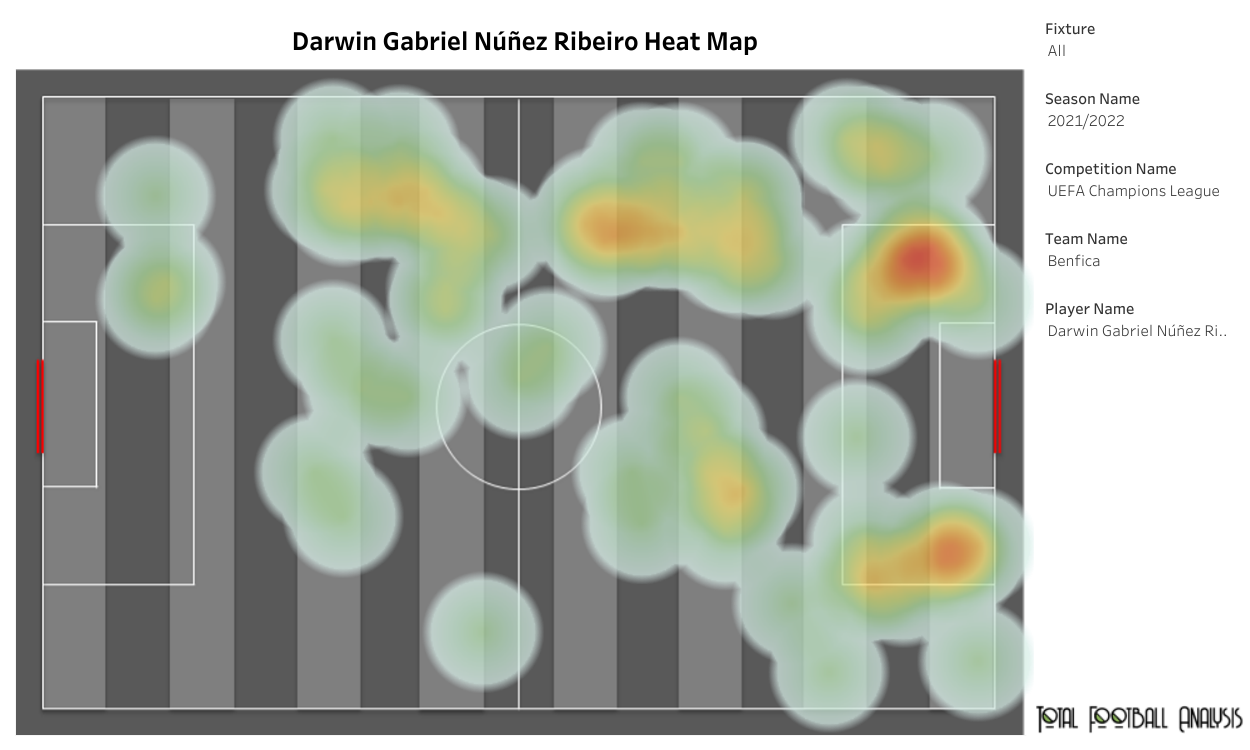 As seen in the above visual, Nunez has proven his ability to occupy different purposes across the front line depending on how his manager has the team set up. In the Champions League matches that Nunez has scored in, he has always been deployed as a lone striker. In some of the Primera Liga games, Darwin has also started as a wide forward. Nunez loves to drop deep and receive the ball and can also play in wider areas to stretch the opposition defense. 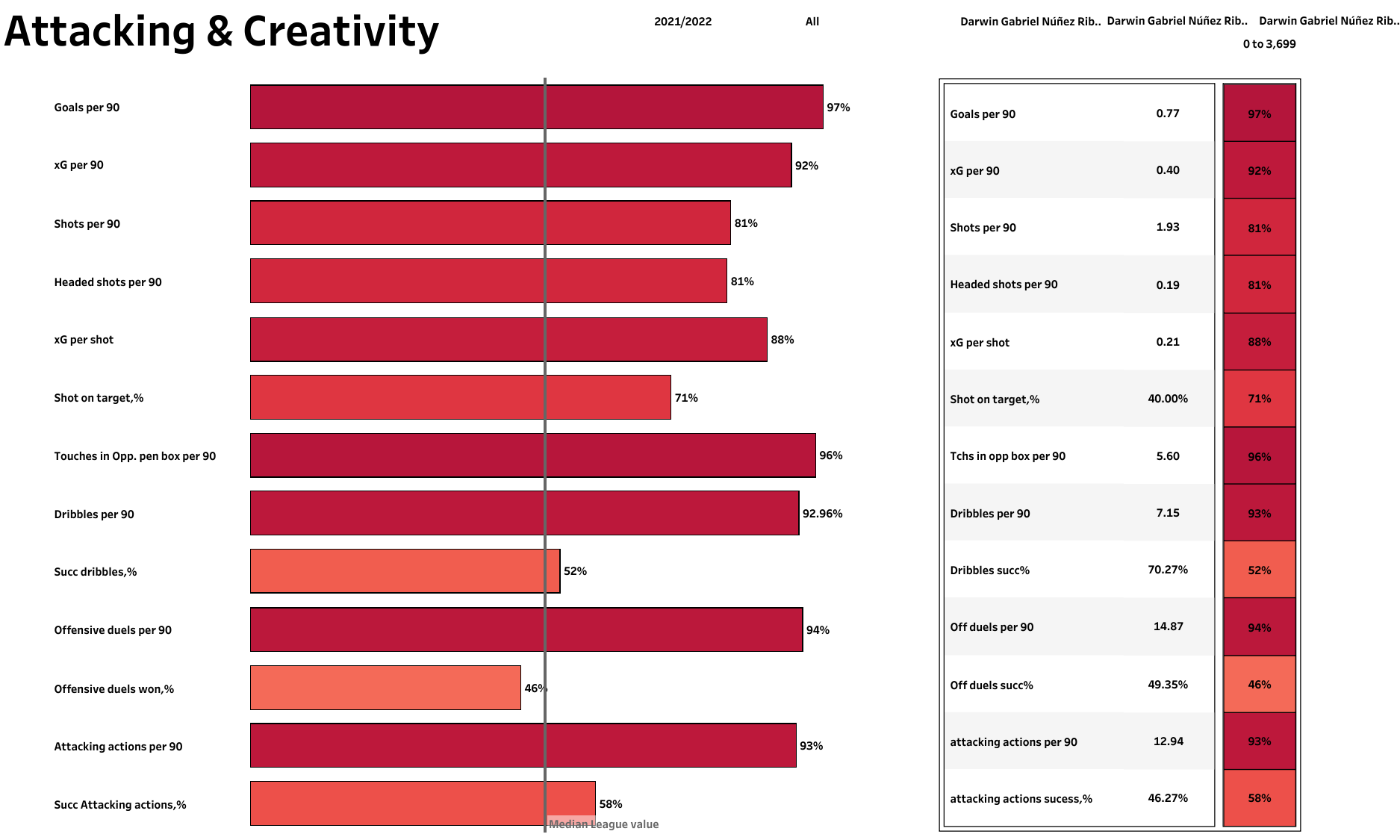 Nunez has scored four goals in eight appearances in the Champions League. The above stats indicate that the striker’s stats are significantly higher than the league median value. He has averaged 0.77 goals per 90 minutes and has an average xG of 0.40. He has a high success rate with the 7.15 dribbles he has attempted per 90 minutes. Nunez has also completed 46.27% of his attacking actions. The 22-year-old ranks highly for the number of touches he has inside the penalty area per 90 minutes. 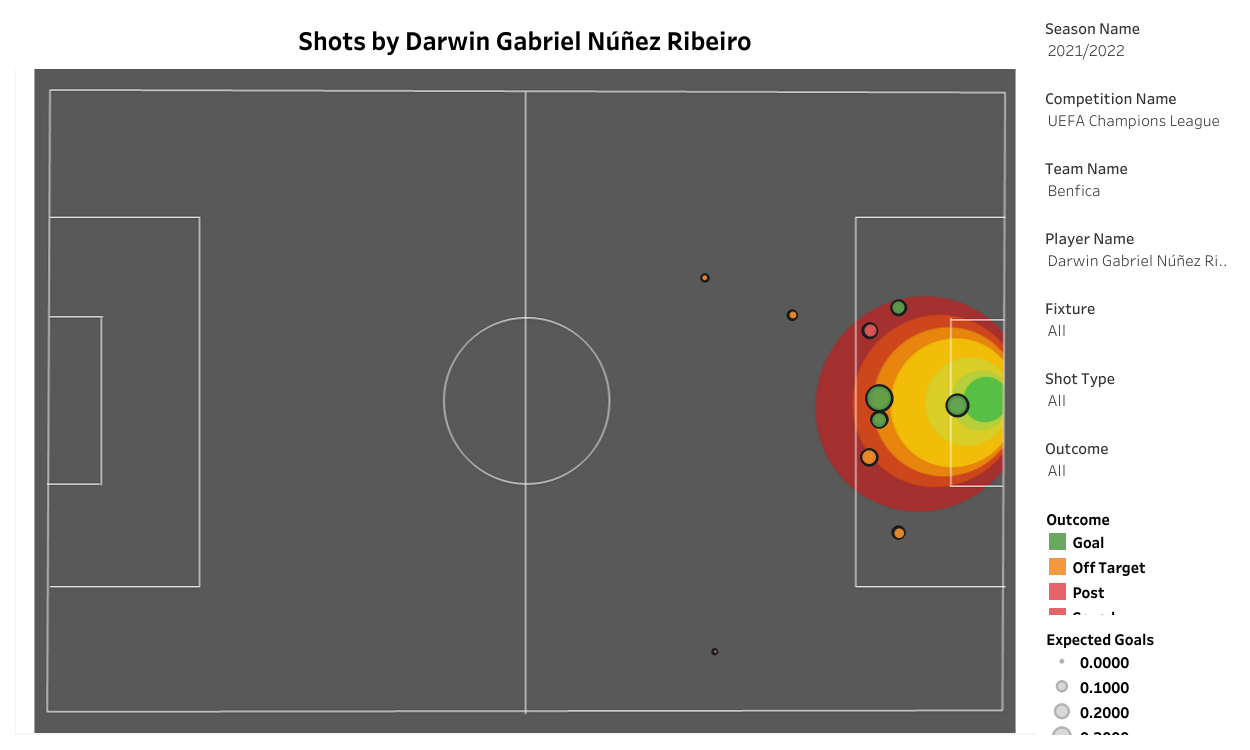 Nunez has attempted 1.93 shots per 90 minutes and has been able to keep 50% of these shots on target. The Uruguayan has had 10 shots on goal in the UCL and has had five shots on target. Out of his five shots on target, he has scored four goals, which indicates he is very clinical with the chances he gets in the box. The majority of his shots have been from inside the penalty area as he gets into great positions inside the box. He likes to shoot and shows little hesitation to do so when an opportunity arises. Combined with his physicality, it makes him a menace in attack. Moreover, his shooting technique mirrors his physicality – it is explosive and robust, preferring power to finesse. 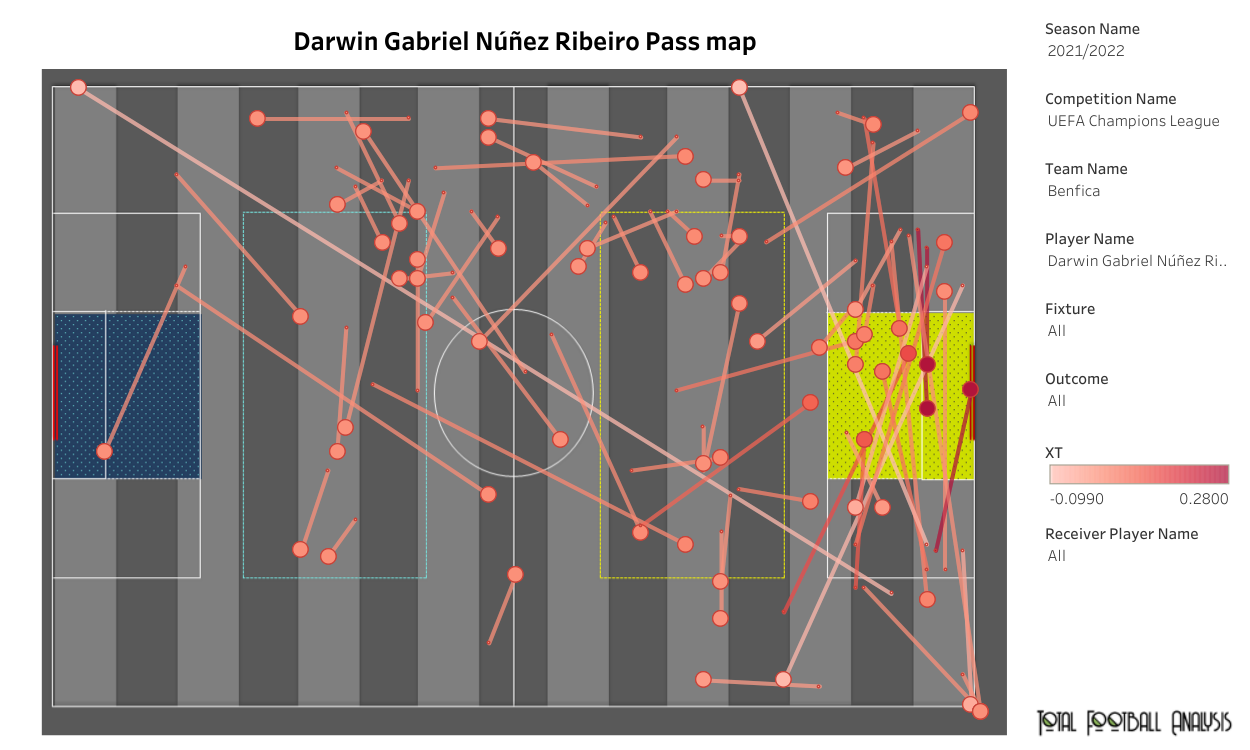 Nunez has great awareness, constantly scans the pitch, and makes decent decisions when moving with the ball into space in the final third. Nunez offers a dual-threat as a runner as his long movements into space are dangerous for their power and directness, while his short movements around the box are valuable for their ability to disrupt and distract the defenders. Most of his passes into the box from the left flank have generated a high xT.

The Sky Blues are on the lookout for a new top-quality centre-forward ahead of the summer. While they signed highly-rated Julian Alvarez from River Plate in January before loaning him back, the club sold Ferran Torres to Barcelona earlier this year, which has vacated a spot in City’s attacking ranks. City are also heavily linked with Erling Haaland, but Darwin Nunez is a great option for them to consider.