Liverpool have made moves in the transfer market to strengthen their squad ahead of the 2022-23 season. The Reds have already signed Fabio Carvalho from Fulham, Calvin Ramsay from Aberdeen and most significantly, Darwin Nunez from Benfica. One position where they lack depth is in defensive midfield. Fabinho is the only notable man in that position. Liverpool need cover in defensive midfield before the season starts. One such player could be Borussia Dortmund’s Axel Witsel. The Belgian is out of contract and can join Liverpool on a free transfer if Jurgen Klopp needs him. 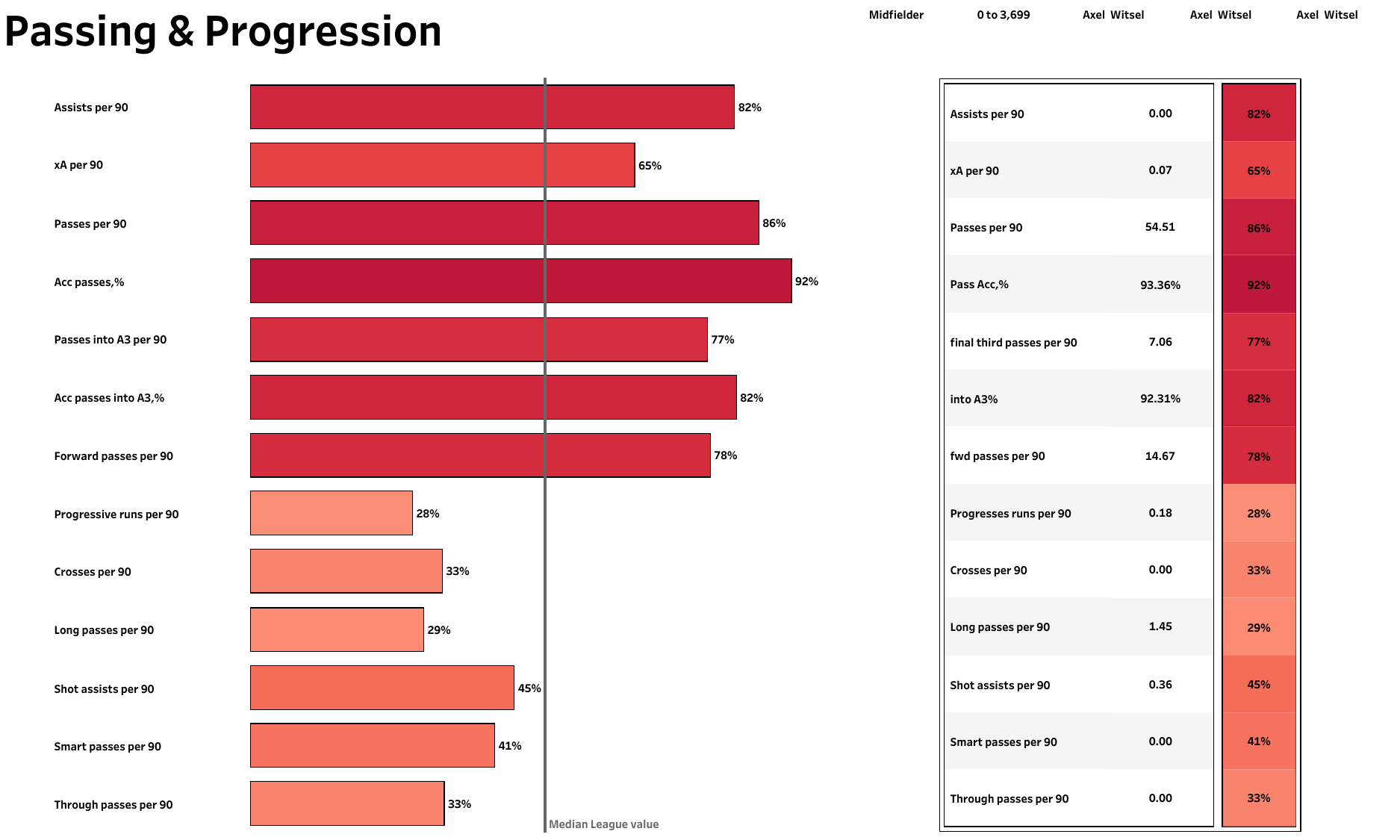 Witsel featured in all six games for Borussia Dortmund in the recently concluded 2021-22 UEFA Champions League campaign as they were eliminated in the group stages, having finished behind Ajax and Sporting Clube de Portugal. Witsel played a total of 470 minutes in the competition. The Belgian was a metronome, attempting over 54 passes per 90 at an astonishing pass accuracy of 93.36%. This pass accuracy ranked him in the top 8% among midfielders. The 33-year-old was also important for ball progression as he attempted just over seven balls into the final third per 90 at an excellent accuracy of 92.31%. 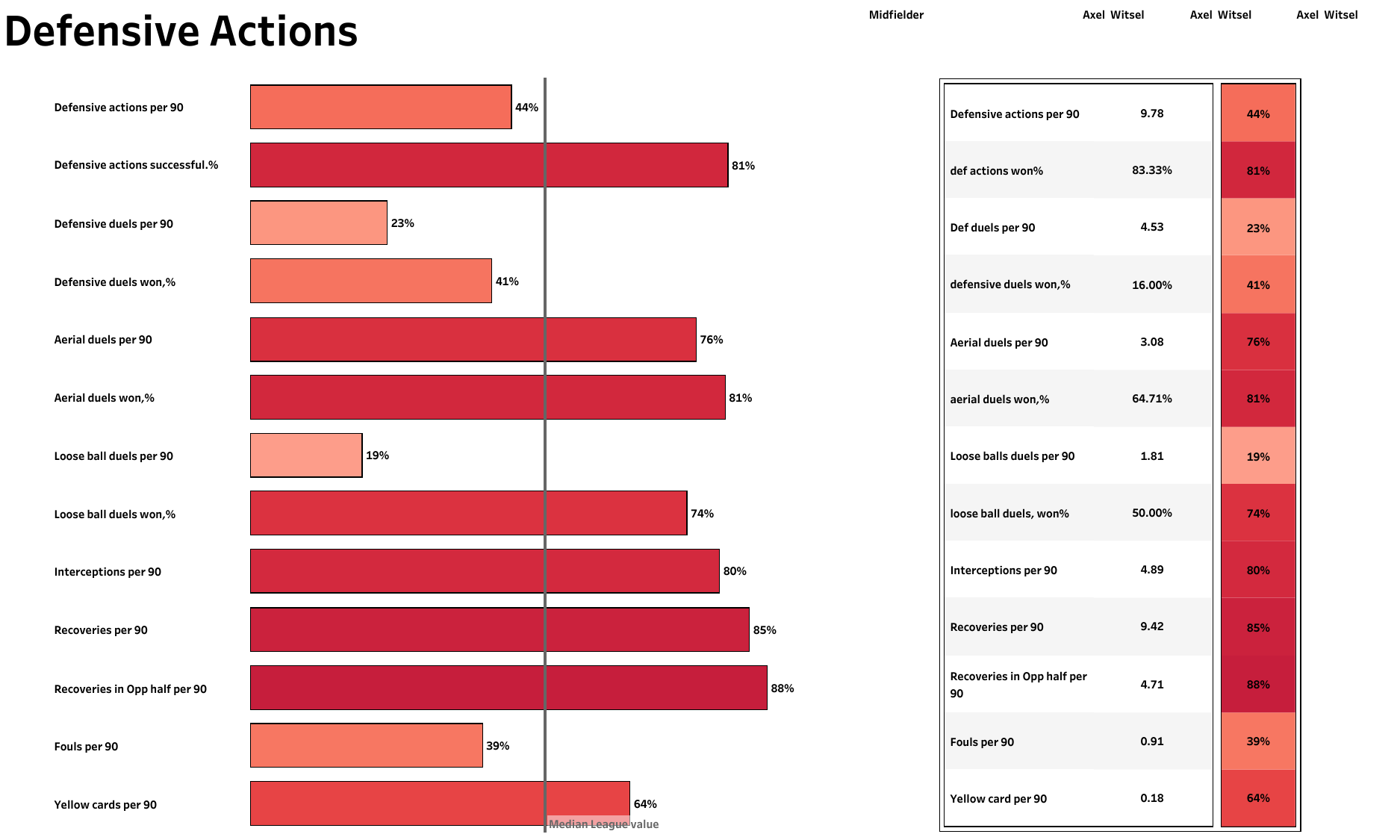 Witsel may have attempted just a shade under 10 defensive actions per 90 for Borussia Dortmund in the UCL, but he had a success rate of 83.33%, which put the Belgian in the topmost quintile for midfielders. Witsel used his height of 186 cm to his advantage, with over three aerial duels attempted per 90 and a win rate of 64.71%. The midfielder also recovered half the loose ball duels he contested. The Liege-born midfielder completed 4.89 interceptions per 90, 9.42 recoveries per 90 and 4.71 recoveries in the opposition’s half per 90, ranking him in the upper quintile for all the categories among midfielders. 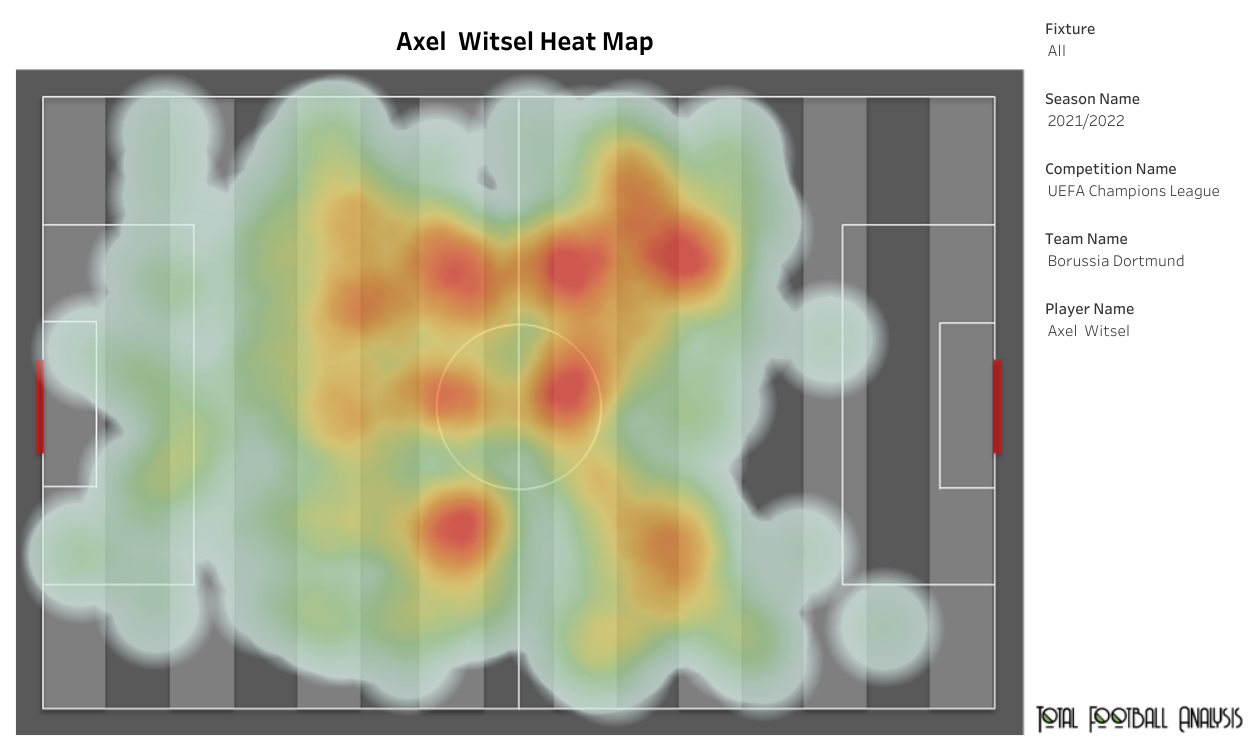 Witsel was highly influential for Borussia Dortmund in the midfield, as shown in the above heat map. He often fed the ball to the creative men ahead of him, like Jude Bellingham and Marco Reus, to name a few. Sometimes, the 33-year-old also distributed the ball to the advancing full-backs. The Belgian midfielder completed 6.15 passes into the attacking third per 90, 3.46 progressive passes per 90 and 3.85 progressive carries per 90. On the defensive end, the 33-year-old attempted 14.2 pressures per 90, 3.46 tackles and interceptions per 90, 1.54 clearances per 90 and 1.35 blocks per 90.

Axel Witsel’s time at Borussia Dortmund may have been a success on the pitch, but it was not enough for Borussia Dortmund to usurp Bayern Munich in the Bundesliga. Witsel could be a valuable backup to Fabinho at Liverpool but at 33, he is, at best, a short-term option.

The post Transfer Talk: Axel Witsel – The Belgian midfielder could be Fabinho’s backup at Liverpool appeared first on Football analysis, news, betting and opinion from Liverpool.