Tottenham Hotspur finished in the top four of the Premier League last season and they will now make a return to the premier European competition, the UEFA Champions League, after a period of two years. To compete on multiple fronts, Antonio Conte has been given support in the transfer market as Spurs have signed Ivan Perisic from Inter Milan, Fraser Foster from Southampton and Yves Bissouma from Brighton. But with strong rumours of Steven Bergwijn leaving Spurs for Ajax, the North London club will be left without much strength in depth in the attacking department, if that happens. His rumoured replacement according to reports in the media is Everton’s Anthony Gordon. 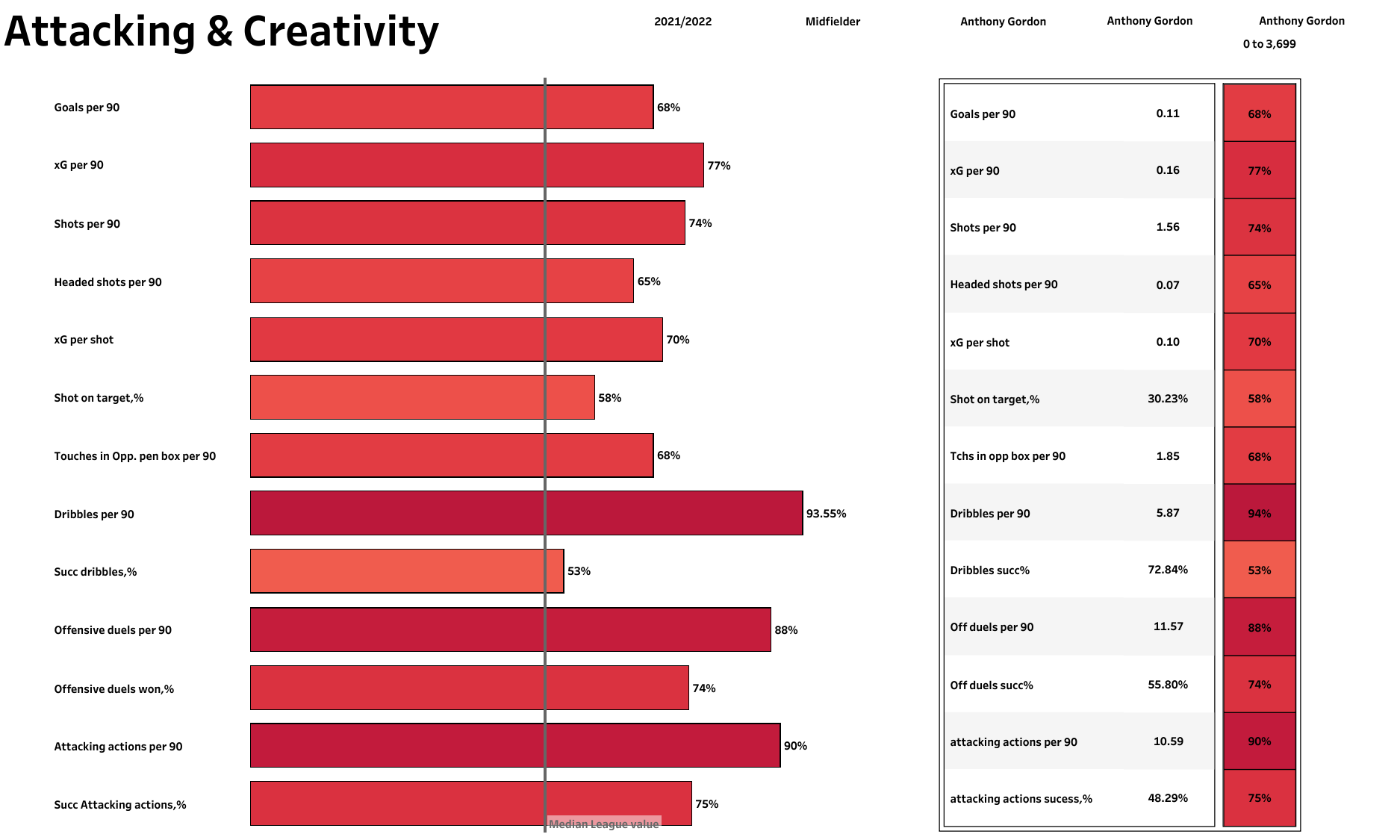 Gordon played 35 games for Everton in the recently concluded Premier League season, starting 25 games and being on the pitch for 2285 minutes. He scored four goals and assisted two of them for a side that was woeful and flirting with relegation for the majority of the campaign, though he slightly underperformed, as per xG. He took 1.56 shots per 90 and hit just over 30% of them on target. Gordon’s biggest strength has been his directness as he attempted close to six dribbles per 90 at a decent success rate of 72.84%. Similarly, he was involved in more than 11 offensive duels per 90 and 10 attacking actions per 90 for the Toffees. 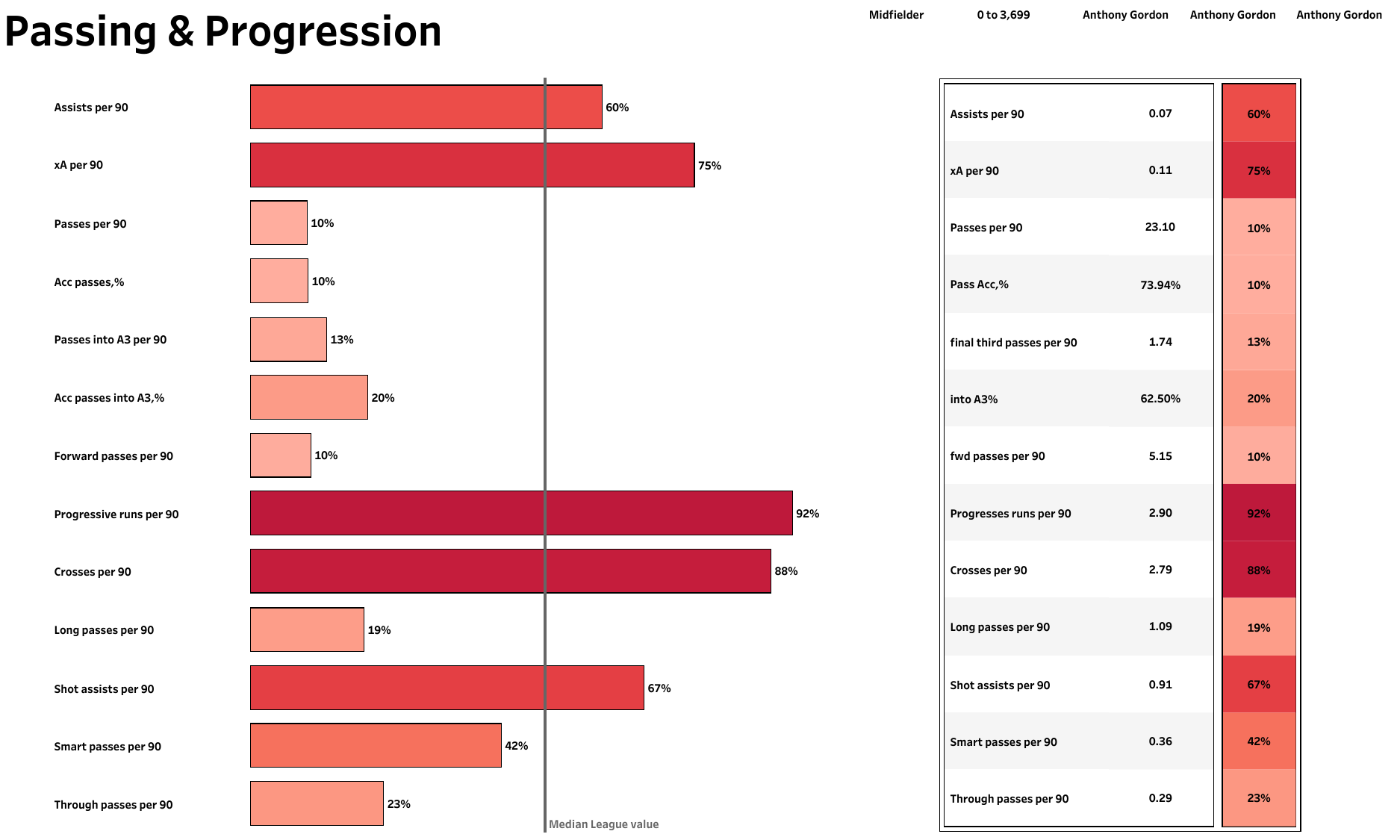 Gordon may have provided two assists, but he slightly underperformed on his xA. His biggest weakness as a player has been the involvement (or the lack therof) in the game as he averaged less than 24 passes per 90 at an atrocious pass accuracy of 73.94%. Gordon is not much better at ball progression either as he attempted only 1.74 passes into the attacking third and had a very low accuracy of 62.5%. In every single category mentioned above, he ranked in the bottom quintile. However, he did rank near the top in progressive runs per 90 and crosses per 90, with 2.9 per 90 and 2.79 per 90, respectively, to his name. 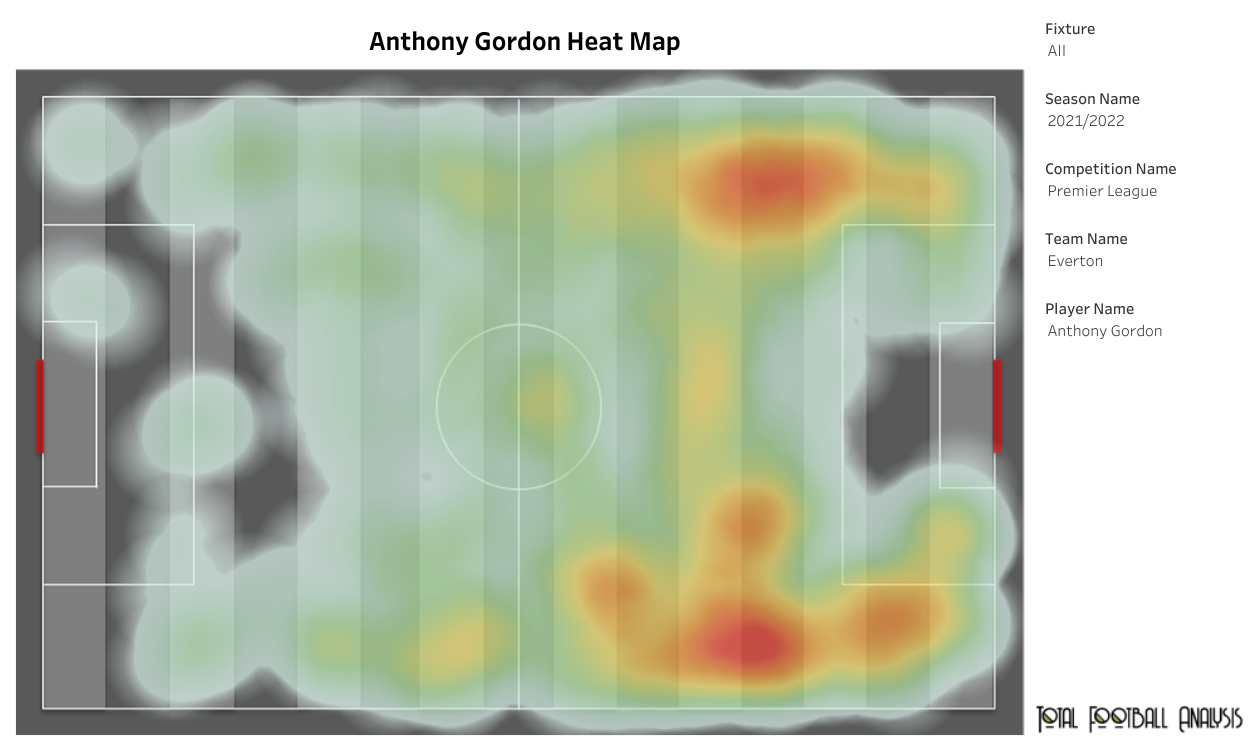 Gordon showed his versatility for the Toffess, as shown in the above heat map. He featured on the right wing 20 times and on the left, he played 12 matches. In the other three games, he played just behind the striker. Gordon made 2.17 progressive passes per 90, 1.34 key passes per 90 and 5.43 progressive carries per 90. He was also a hard worker off the ball, attempting 23.5 pressures per 90, 3.86 tackles and interceptions per 90 as well as 2.28 blocks per 90. 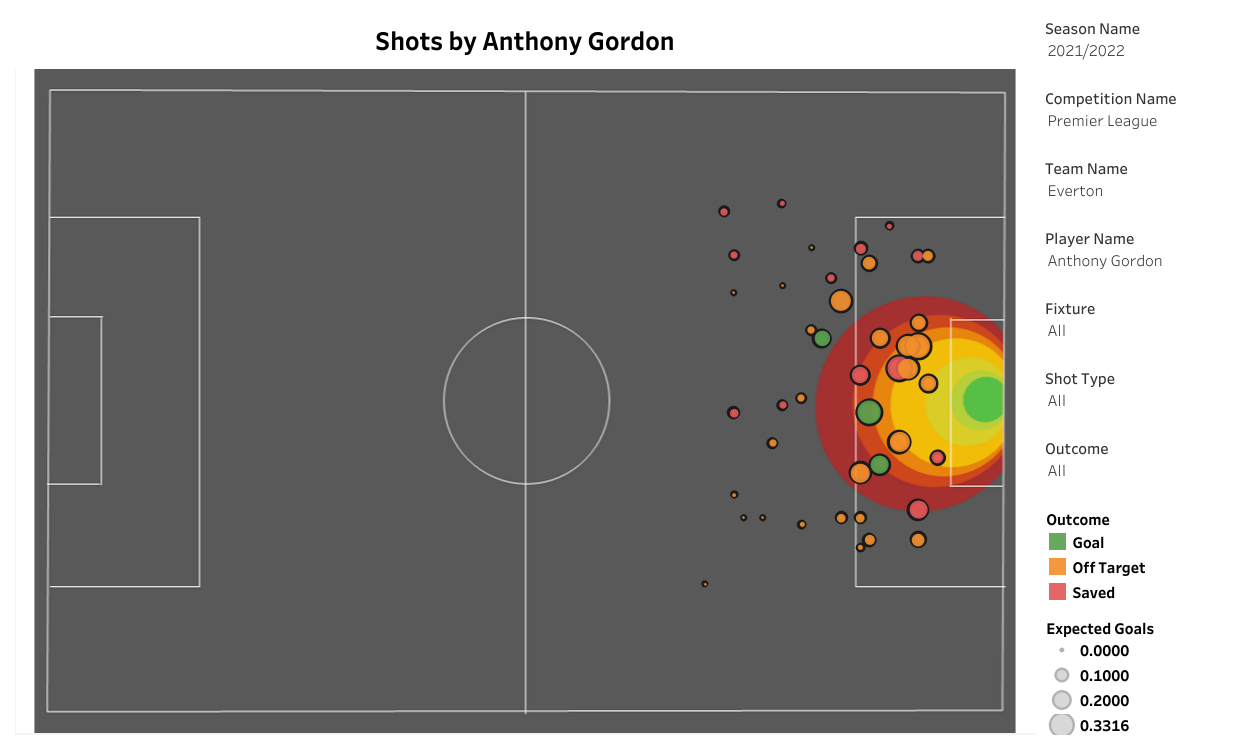 As given in the above shot map, Gordon scored three goals, one of which came from outside the box. However, he missed quite a few big chances for the Toffees, as seen by the number of fairly big orange circles. Gordon attempted 44 shots, meaning he needed 11 shots to score one goal on average.

Anthony Gordon may have been one of the very few bright sparks in the Everton side that horribly underperformed under Rafael Benitez and Frank Lampard. Having survived the drop, however, the Toffees will demand a very high fee for the English youngster, given that he could play a more important role if Richarlison does leave Goodison Park.