West Ham United finished the last season in 7th place and qualified for the UEFA Europa Conference League this season. Ahead of the start of the season, they have signed Nayef Aguerd from Stade Rennais and Flynn Downes from Swansea City. However, they are yet to sign a forward or at least one player who can play in advanced areas of the pitch. Despite being linked with several names, none of them arrived at the London Stadium. According to recent reports, the East London club expressed interest in bringing in Liverpool’s Alex Oxlade-Chamberlain. 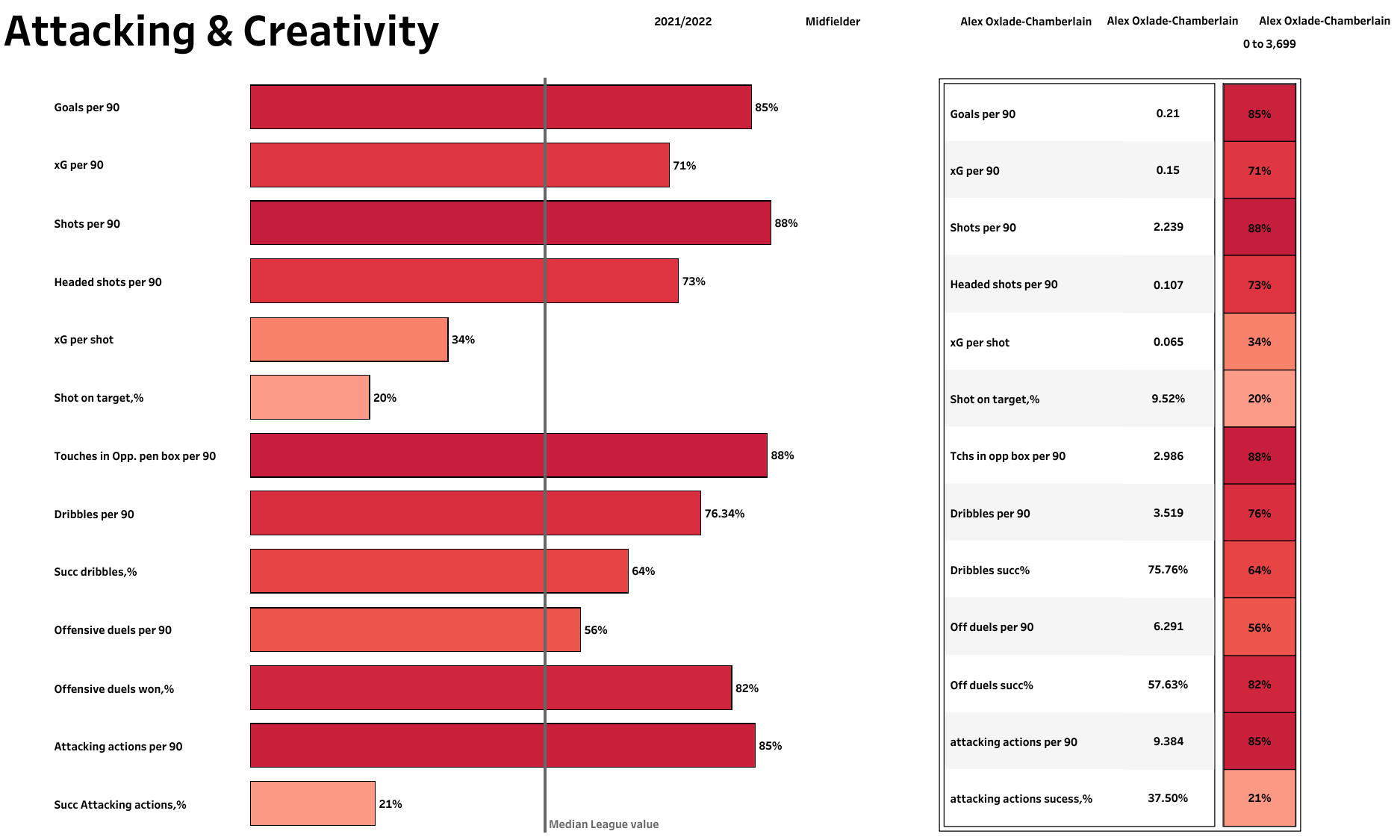 Oxlade-Chamberlain featured for Liverpool in 29 matches across all competitions. This included 17 in the Premier League, but he lasted only 787 minutes. During this time, he scored twice and assisted once, involving himself in a goal every 262 minutes. He slightly outperformed his xG output of 0.15 per 90. The former Arsenal man took 2.24 shots per 90, putting him in the top 12% among midfielders. He shot an atrocious 9.52% of his shots on target despite registering nearly three touches in the opponents’ penalty box per 90. He attempted over 3.5 dribbles per 90 with a 75.76% success rate. He was involved in more than nine attacking actions per 90. 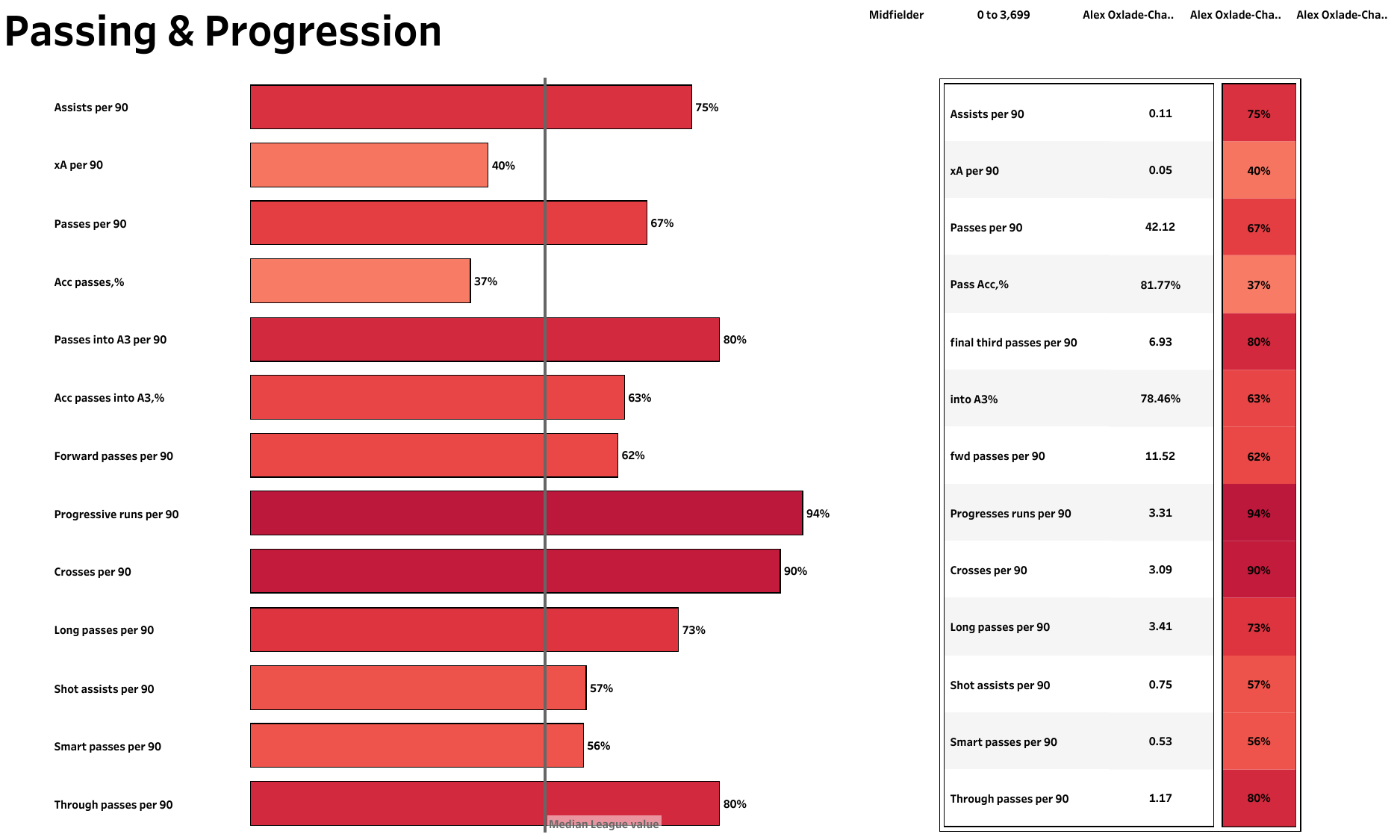 Oxlade-Chamberlain registered one assist as he more than doubled his xA output. He attempted just over 42 passes per 90 with an accuracy of just a shade below 82%. He tried to pass the ball into the final third nearly seven times per 90 minutes and did so at a 78.46% success rate. With 3.31 progressive runs per 90, the Englishman was ranked in the 94th percentile for this category among midfielders. He also delivered over three crosses per 90, placing him in the upper decile. And with 1.17 through balls per 90, he was comfortably within the upper quintile. 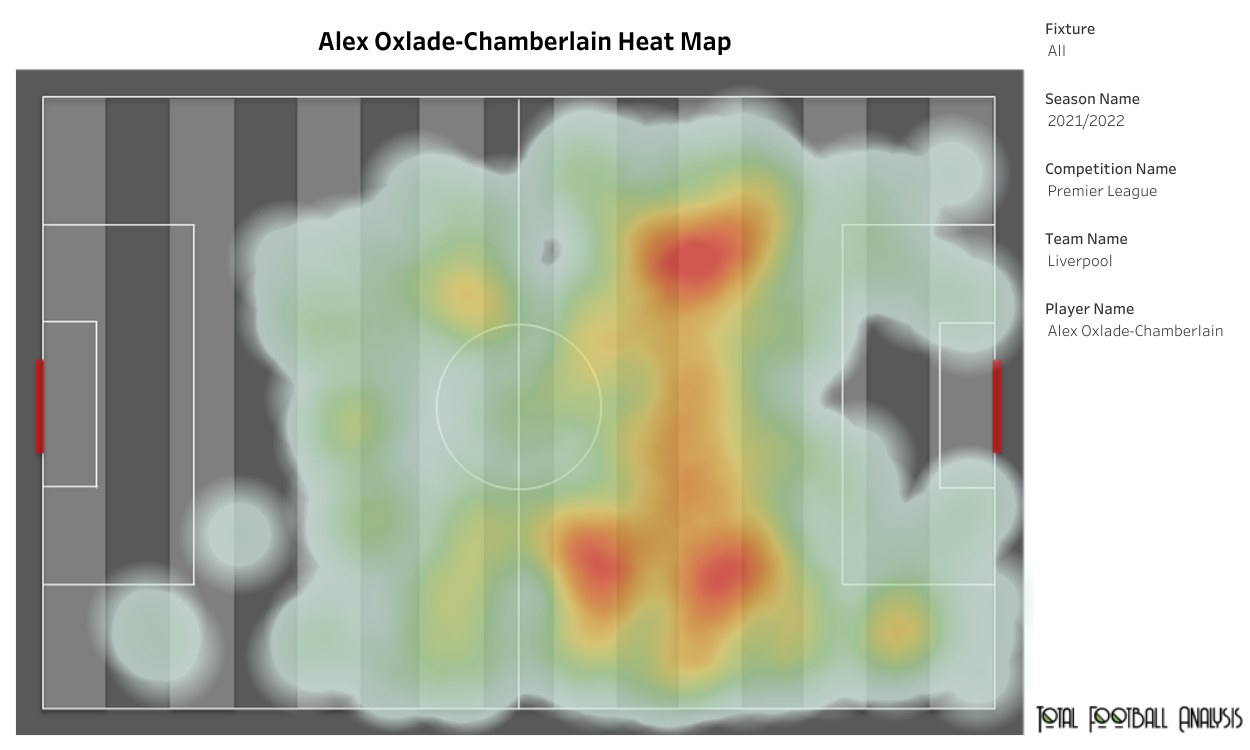 Despite being listed as a central midfielder, Oxlade-Chamberlain was very versatile as he played far higher up the pitch and occasionally on the flanks. This could also be due to Jurgen Klopp’s Gegenpressing system as Liverpool spent far more time in the attacking third against the majority of the teams. In his limited game-time, he completed 5.17 progressive passes per 90, 4.6 balls into the final third per 90, 1.84 passes into the penalty area per 90, 1.03 key passes per 90, 7.47 progressive carries per 90 and 3.79 carries into the final third per 90. Additionally, he received 6.21 progressive passes per 90. Defensively, he completed 7.24 successful pressures per 90, 2.87 tackles & interceptions per 90 and 1.26 blocks per 90.

Alex Oxlade-Chamberlain has slipped further down the pecking order last season in the Liverpool midfield as the likes of Jordan Henderson, Fabinho, Thiago, Naby Keita, and even Curtis Jones got more minutes than him. With his contract expiring in 12 months’ time, West Ham can acquire the former Arsenal player for a cheaper fee, if they are interested.