The upcoming summer would likely see Everton dive deep into the transfer market for a squad overhaul. The Toffees need reinforcements in multiple areas of the pitch, as they continue their battle for survival in the Premier League. It has been reported that Everton have made contact for the availability of Juventus midfielder Adrien Rabiot. Since he arrived in Turin on a free transfer in 2019, Rabiot has struggled with consistency and has failed to convince multiple managers. Although he has been afforded plenty of chances by Allegri this season, it is believed that the Juventus hierarchy considers him surplus to requirements.

With Juventus reportedly planning an overhaul of the squad themselves, Rabiot could be willing to switch clubs. Everton have been interested in signing the Frenchman in the previous season as well, however, a deal could not materialize. The 26-year-old is under contract with Juventus till the end of next season, and he could be available at a bargain price this summer.

Although there have been a lot of criticisms of the Frenchman this season, Juventus manager, Max Allegri, has regularly deployed Rabiot in his midfield. So far, the midfielder has made 36 appearances across all competitions. He remains a key part of his international side, with Didier Deschamps deploying him in rotation in the midfield pivot.

Let’s take a look at some stats to gauge if Rabiot could fit in Everton’s midfield. 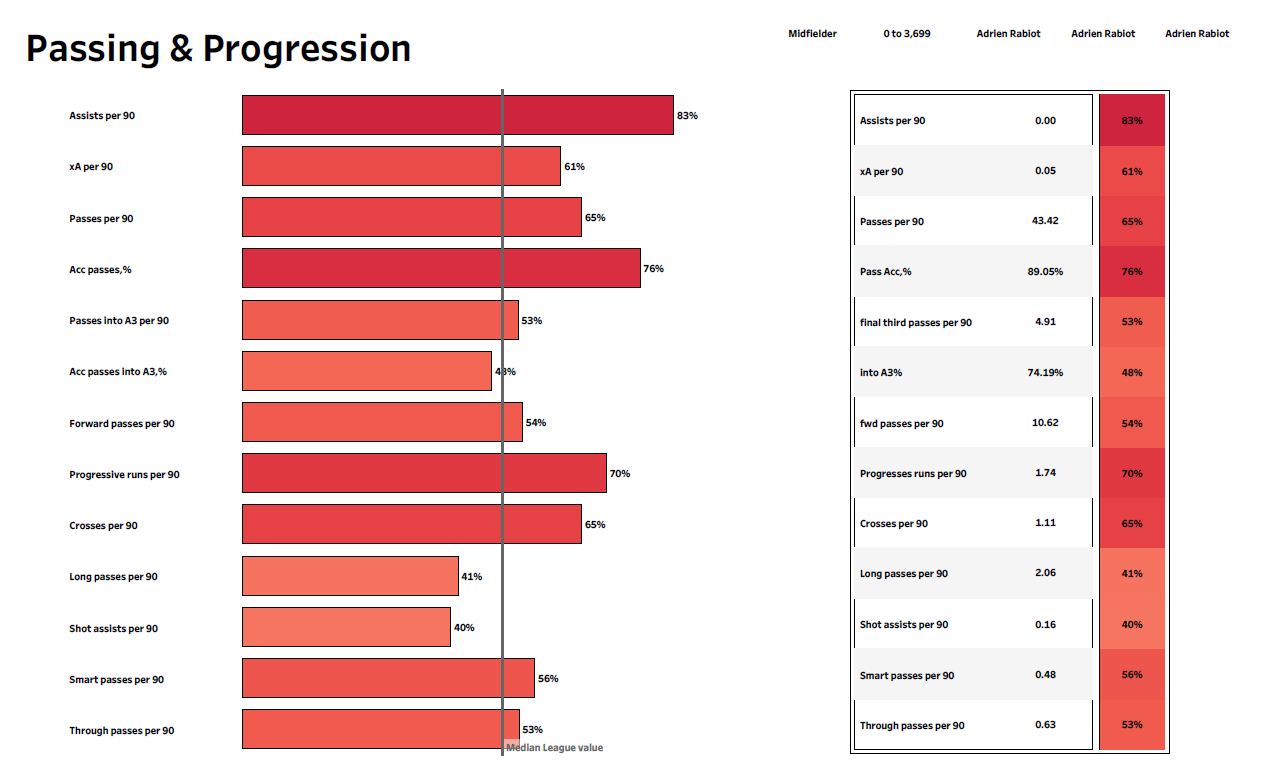 In the above viz, we can see Rabiot’s passing & progression stats in the Champions League this season. The majority of his stats surpass the league median, with his most notable stats being passing accuracy, progressive runs per 90, and crosses per 90. The Frenchman is adept at making penetrative runs off the ball and can receive line-breaking passes. He has demonstrated his ability to protect the ball under pressure. Despite his ability to protect the ball in tight areas, Rabiot, on occasions, losses possession due to his poor body positioning and awareness. The Frenchman possesses defensive qualities that aid him when he is deployed in a deep-lying role. His strength makes him adept at moving opponents off the ball and winning back possession. In addition, he can disrupt the opponent’s rhythm of attacks or progressive play.

The above viz displays the locations of the pitch where Rabiot has delivered his passes. We can see that his span of passing is large, with the midfielder making passes all over the pitch. The Frenchman is adept at carrying the ball forward from the midfield. His ball-playing capabilities allow him to receive and advance possession into the opponent’s half. Some of the 26-year-old’s passes into and near the opposition box carry a high expected threat.

This season Rabiot has been deployed as a left-midfielder in Allegri’s 4-4-2 setup. During possession, Rabiot moves infield, creating space for the left-back to overlap. While his effectiveness in the final third has been questioned, Rabiot is capable of providing a link between the defense and the attack. He is adept both as a single pivot and a double-pivot in the midfield. The above viz highlights his areas of activity on the pitch. We can see Rabiot’s presence in the opponent’s half on the left wing.

Rabiot is capable in box-to-box or a deep-lying role. The Toffees are currently lacking depth in their midfield, and the Frenchman could be a decent option. However, Rabiot’s salary demands could be a decisive factor in getting the deal done.