Manchester United will look to return to winning ways when they host Tottenham Hotspur in the English Premier League. Both teams sit in the top-five positions and are contending for the league title. This is a crucial fixture for both teams in their search for silverware.

Manchester United will play back-to-back games at home. They are coming after playing a goalless draw against Newcastle United. The Red Devils have won five, drawn one, and lost three matches this season. Erik ten Hag’s men have a negative goal difference this season. They have scored 13 goals with an average xG rate of 1.35. The defence has conceded 15 goals with an average xGA rate of 1.89. Manchester United have earned victories over Liverpool and Arsenal. This is the fourth biggest team they will face.

Tottenham Hotspur have a better record than their opponents. Tottenham have won seven, drawn two and lost only one game this season. They have scored 22 goals with an average xG rate of 1.86. The defence has conceded ten goals and averages 1.21 xGA per match. Spurs are on a two-match winning streak and will look to make it three wins in three matches.

How have the teams performed 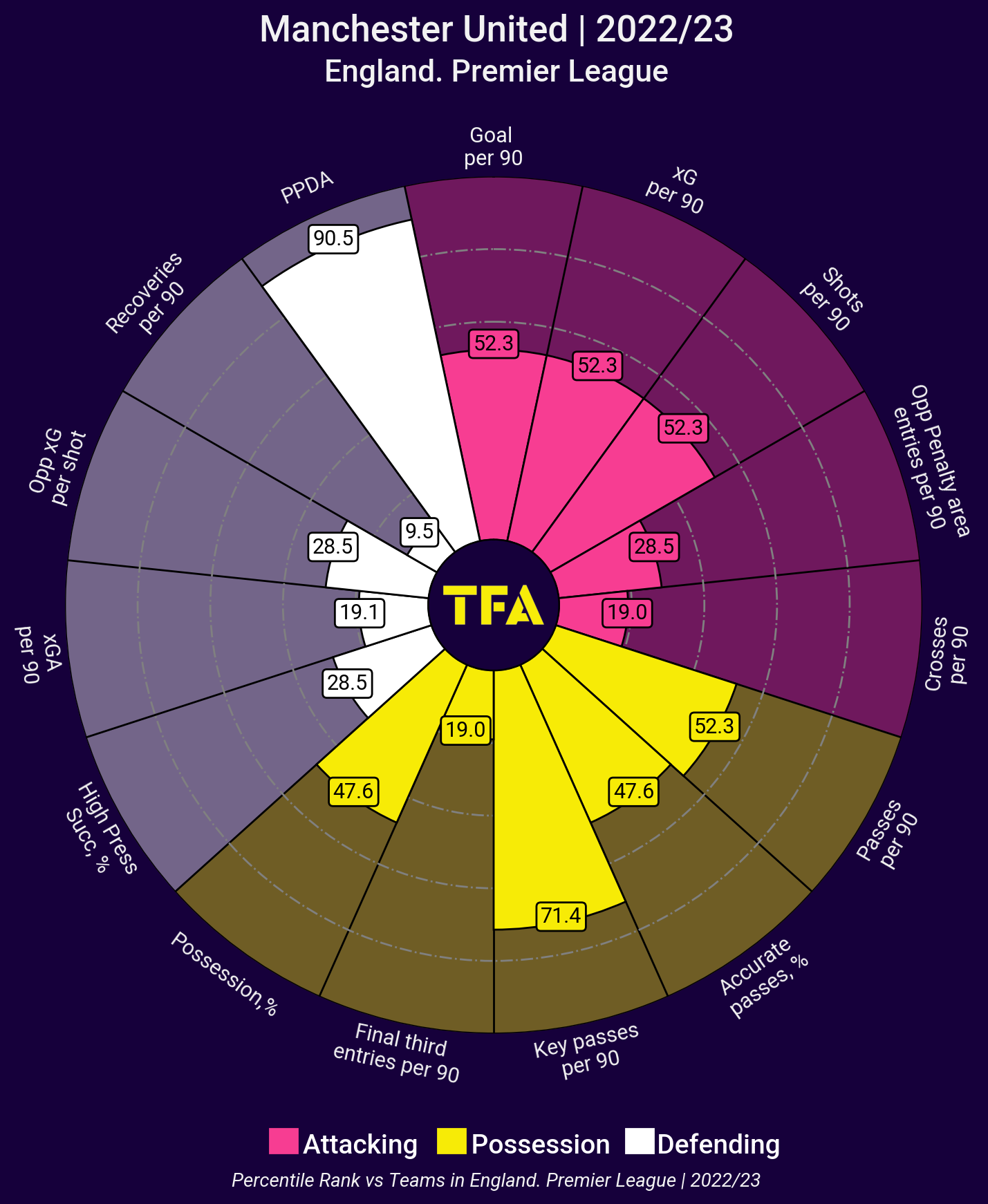 The Red Devils haven’t played fancy football but have managed to get a result in their favour in most of the matches. The team is settling under Erik ten Hag and have shown signs of improvement. The above viz shows the percentile rank of the home team in comparison to the other English Premier League teams. We can observe that Manchester United are ranked low in the attacking department. Defensively, they are improving game by game. The team conceded four goals against Brentford and six against Manchester City. This has affected their goal difference. Manchester United are not a high-pressing side. 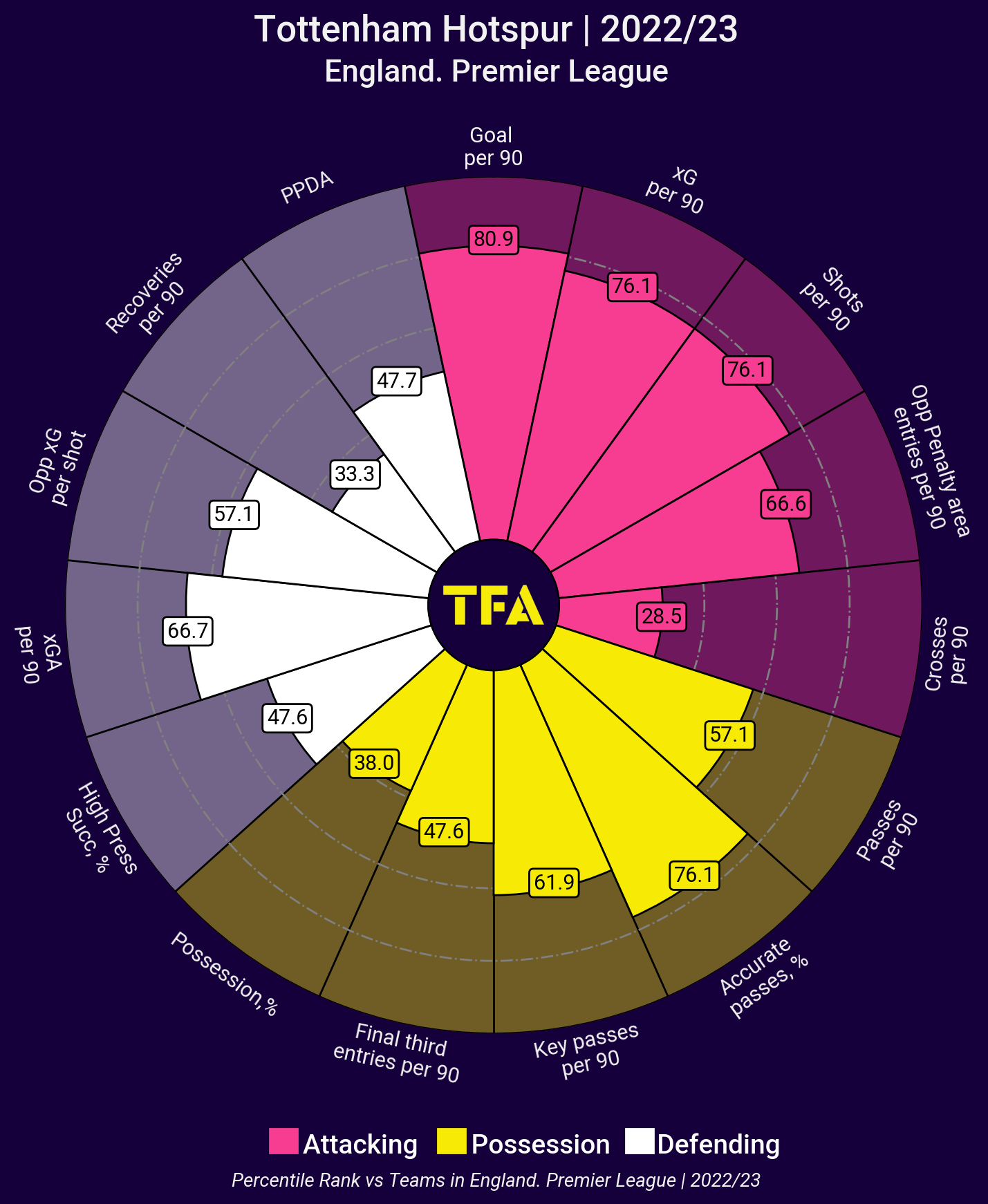 Tottenham Hotspur have improved a lot under Antonio Conte this season. They have become a high-goal-scoring team and their percentile rank is a bit high in the attacking department. Spurs like to sit back and hit the opponents on counterattacks. They have a good pace in their attack and the players have converted most of their chances. Spurs look like the more attacking team in this match. 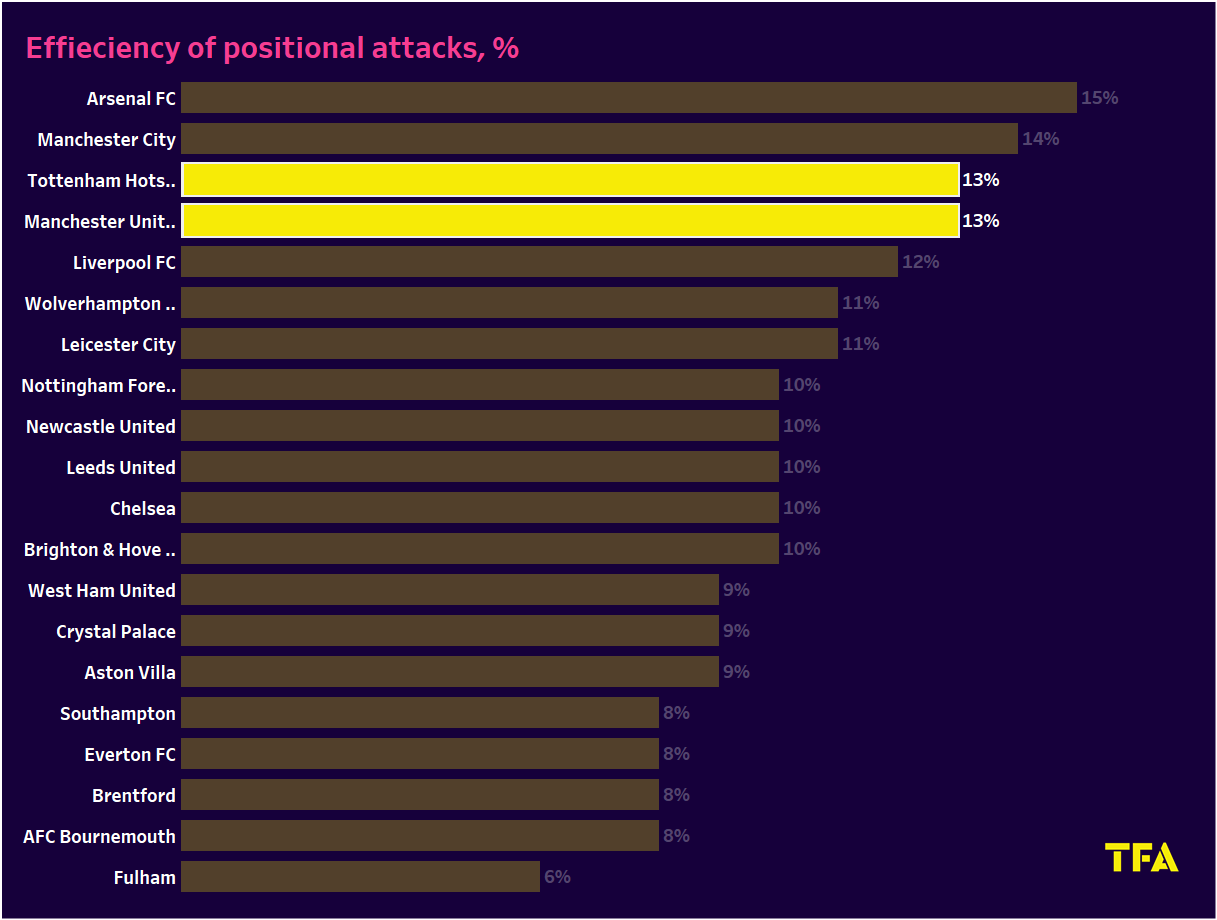 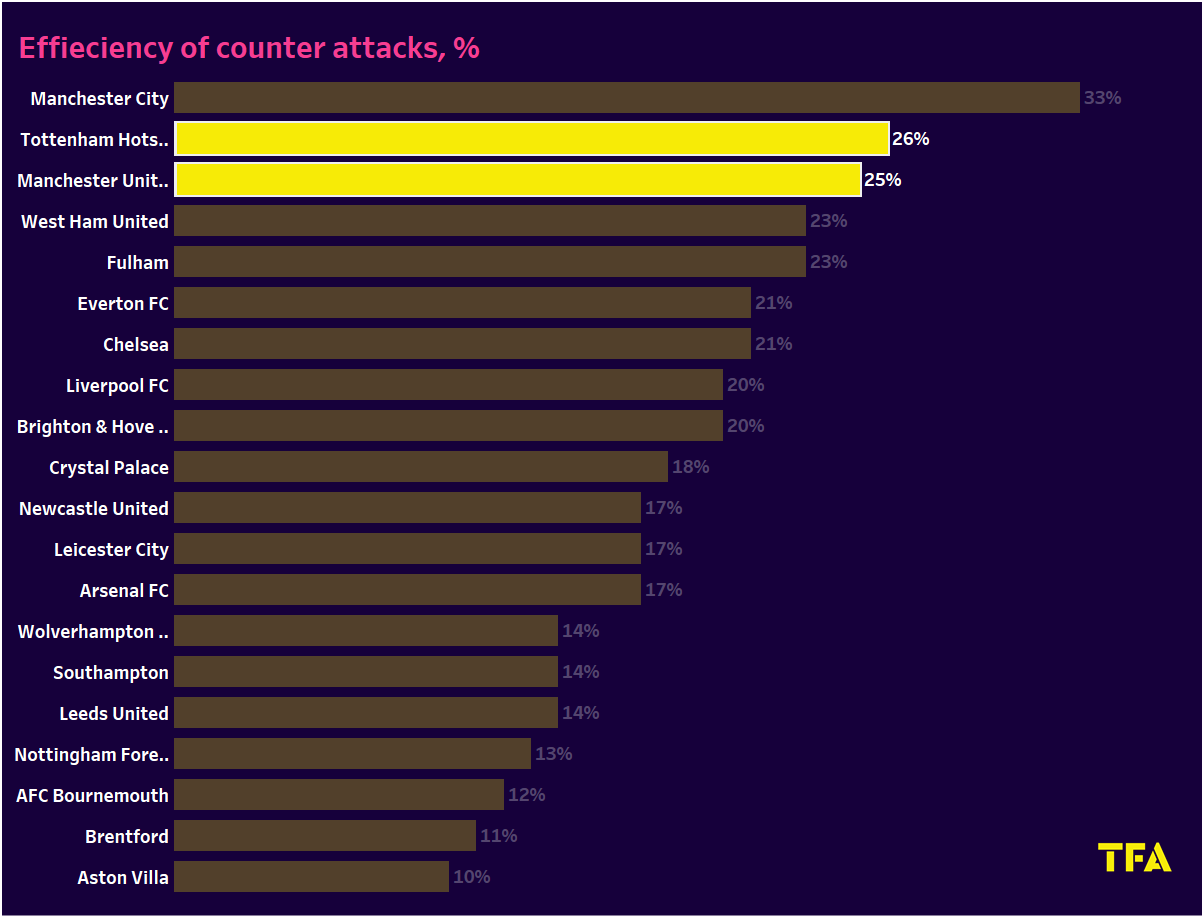 One of the reasons behind some early success for both teams is their efficiency in attack. Manchester United averages 25.9 positional attacks and 2.33 counterattacks per match. They take 12.1 shots per match and have an accuracy rate of 34.8%. The Red Devils are ranked at the top in attacking efficiency in the league. They will have to be more clinical against this Spurs lineup.

The visitors also have a similar record. They average 24.6 positional attacks and 3.3 counterattacks. The shot average is 13.2 per match and the accuracy rate is 45.5%. Both teams can hit each other on the counterattacks. A high efficiency rate makes them more dangerous in an attack. 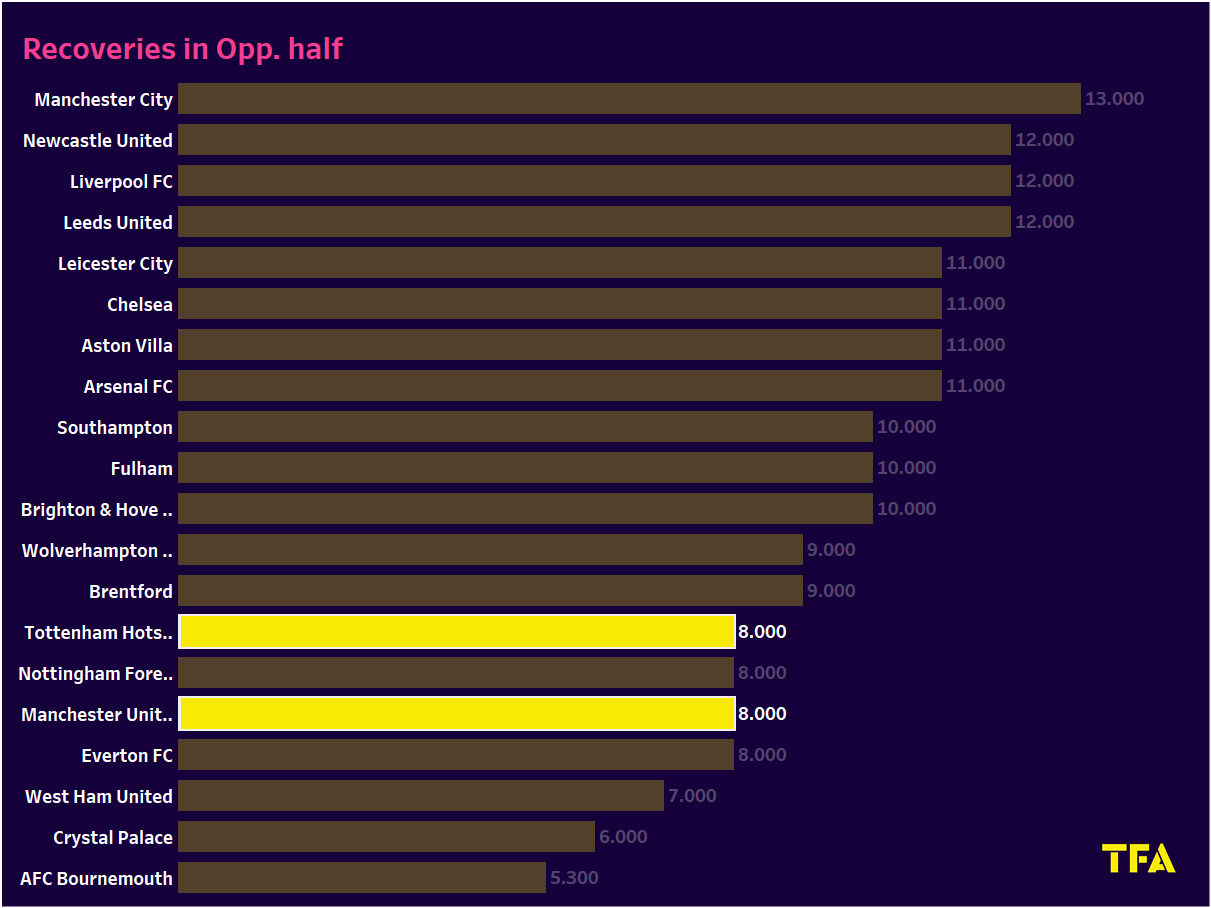 Marcus Rashford is likely to lead the line for the home team. He has scored three goals and hasn’t scored since Arsenal’s match. Rashford likes to score against the big teams. He scored a brace against Arsenal and one goal against Liverpool. Marcus Rashford’s pace allows him to break the opposition’s defence on the counterattack. He will look to take advantage of this in the match. 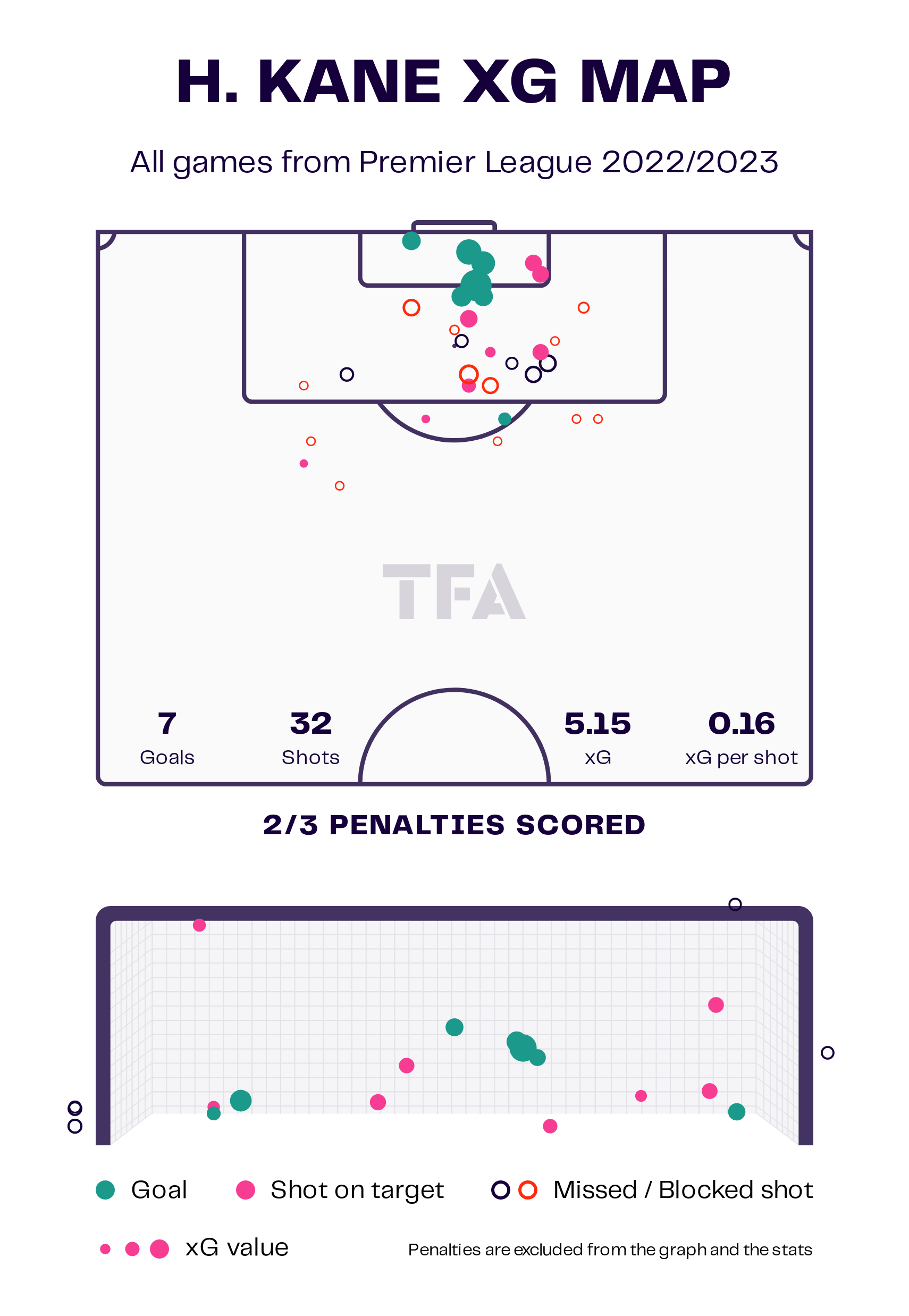 Harry Kane has always been a big-match player for Spurs. The English striker has scored nine goals in the league this season and will be looking to get into double figures in this match. The above viz shows that Harry Kane has scored most of the goals from in and around the 6-yard box. Manchester United’s defence will have to remain tight and can’t afford to give him space inside these dangerous areas. He will be the greatest threat to the visitors.

Scott McTominay will return to the team after missing the weekend’s game. However, they will still be without the likes of Anthony Martial and Harry Maguire.

Richarlison might miss the match after leaving the pitch injured against Everton over the weekend. Dejan Kulusevski is also out with an injury.

This will be the biggest match of the weekend as two of the teams fighting for a top-four position go head-to-head at Old Trafford. Manchester United will have the home advantage, but it won’t be easy for them to beat Antonio Conte’s Spurs. Both teams will need a bit of magic in the attack and hope that their strikers get on the scoresheet.