Bottom-placed Norwich City will host fourth-placed Tottenham Hotspur at Carrow Road on the final matchday of the 2021-22 Premier League season. The reverse fixture saw Spurs win 3-0 at the Tottenham Hotspur stadium back in December 2021, thanks to goals from Lucas Moura, Davinson Sanchez and Son Heung-Min. Coming into this match, Norwich held Wolves to a 1-1 draw away at the Molineux, and Tottenham won 1-0 against Burnley at home. 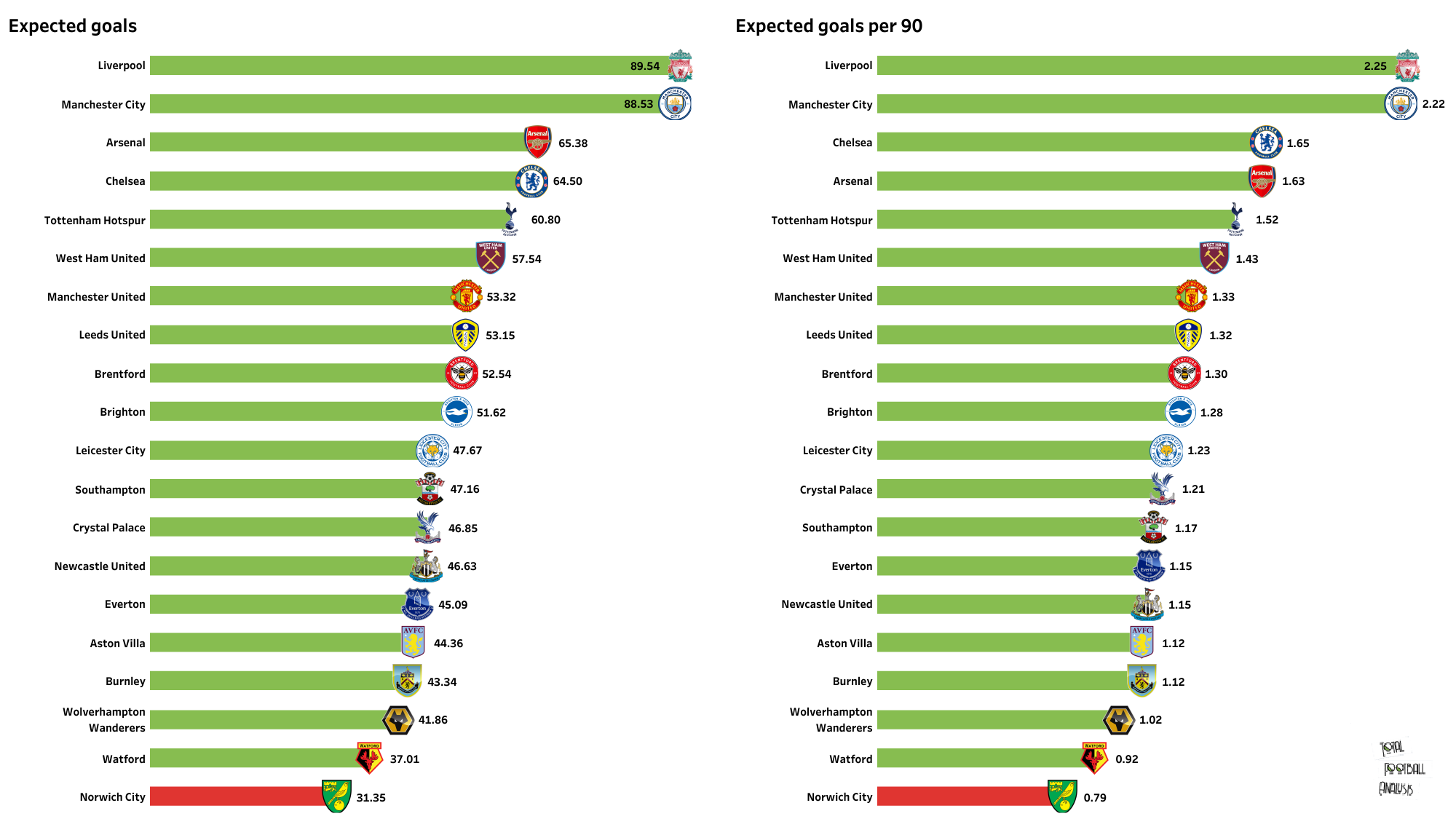 Norwich City have already been relegated and come into the final game after holding Wolverhampton Wanderers to a 1-1 draw. Teemu Pukki scored and gave the Canaries the lead before Rayan Ait Nouri equalized in the second half for the Wolves. Norwich have won and drawn just five and seven games, respectively, losing the other 25 matches, and their goal difference is -56. The Canaries rank bottom in xG, with 31, and even then, they have underachieved on this, with just 23 strikes to their name. 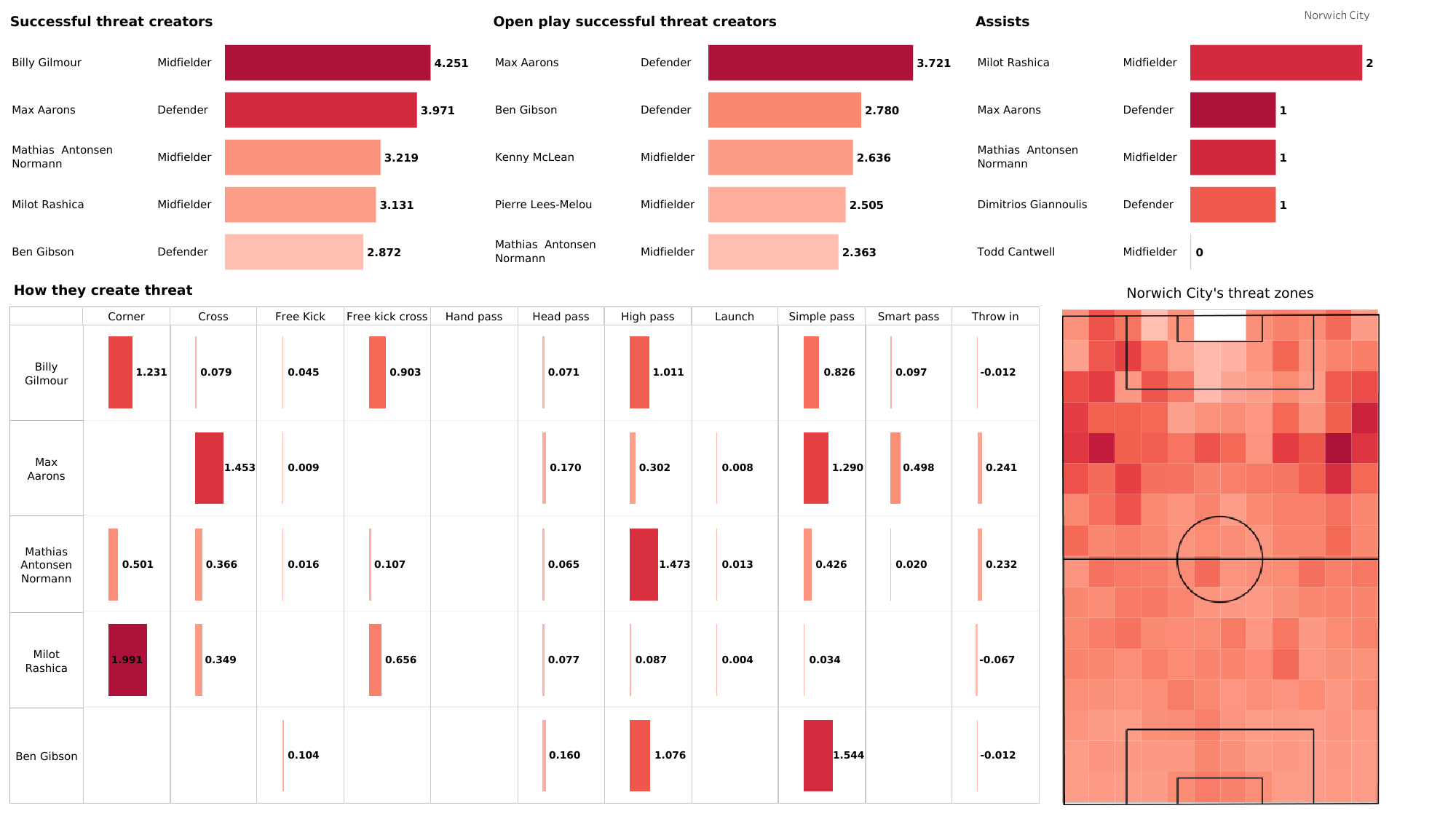 The Scotsman Billy Gilmour, on loan from Chelsea, is Norwich City’s most successful threat creator in the Premier League this season. However, most of his threat has come from corners and free-kicks. From open play, it is the right-back Max Aarons who has generated the most threat for the Canaries. The Finnish striker, Teemu Pukki, is the team’s leading assist maker, with three to his name. 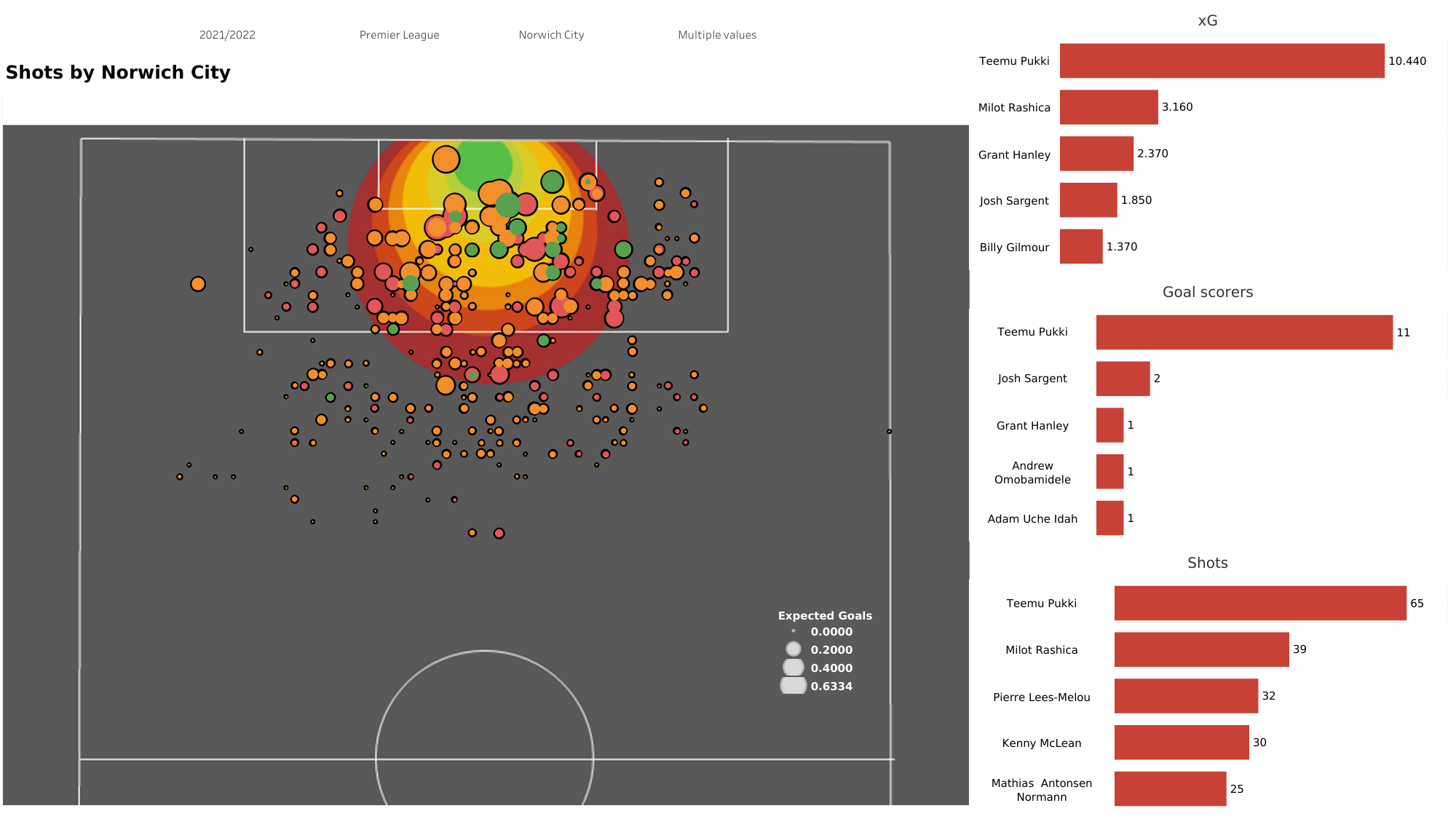 Seen in the above visual is Norwich City’s shot map in this season of the Premier League, excluding the penalties. Teemu Pukki has scored 11 goals for the Canaries, but the second-best goalscorer, Josh Sargent, has only two strikes to his name. In fact, when taking total goal involvement (goals + assists) into consideration, one man (Teemu Pukki) accounts for nearly 61% of the goals scored by the entire team. 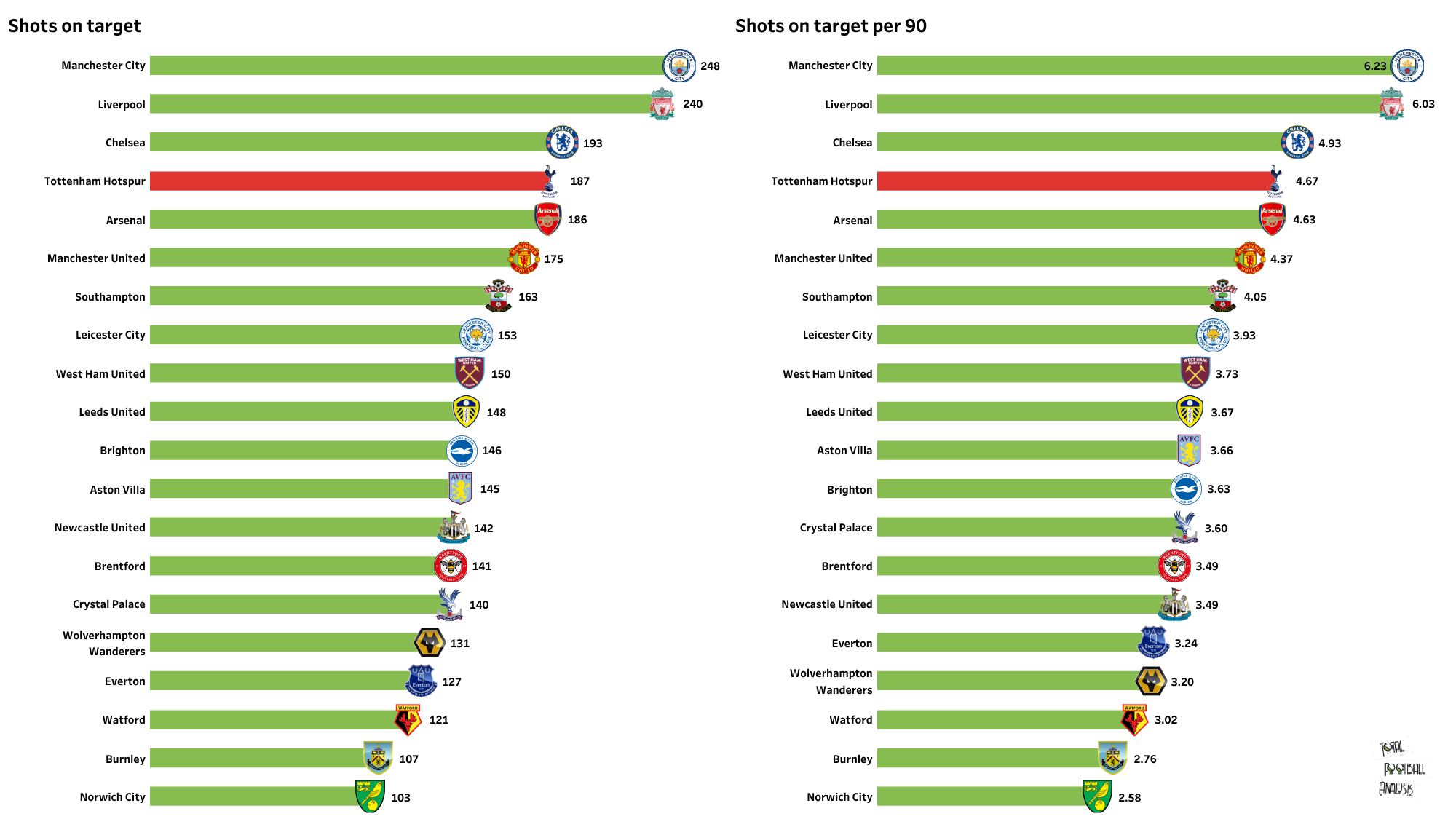 Tottenham Hotspur head into this encounter after winning 1-0 against Burnley at home, thanks to a penalty from Harry Kane in the first-half stoppage time. This win combined with Arsenal’s 0-2 loss at St. James’ Park to Newcastle United means Tottenham’s fate for Champions League qualification is in their hands. Spurs’ record stands at 21 wins, five draws and 11 losses with a goal difference of +24. This season, Tottenham have taken 187 shots on target, which ranks fourth and an average of 4.67 shots per game. 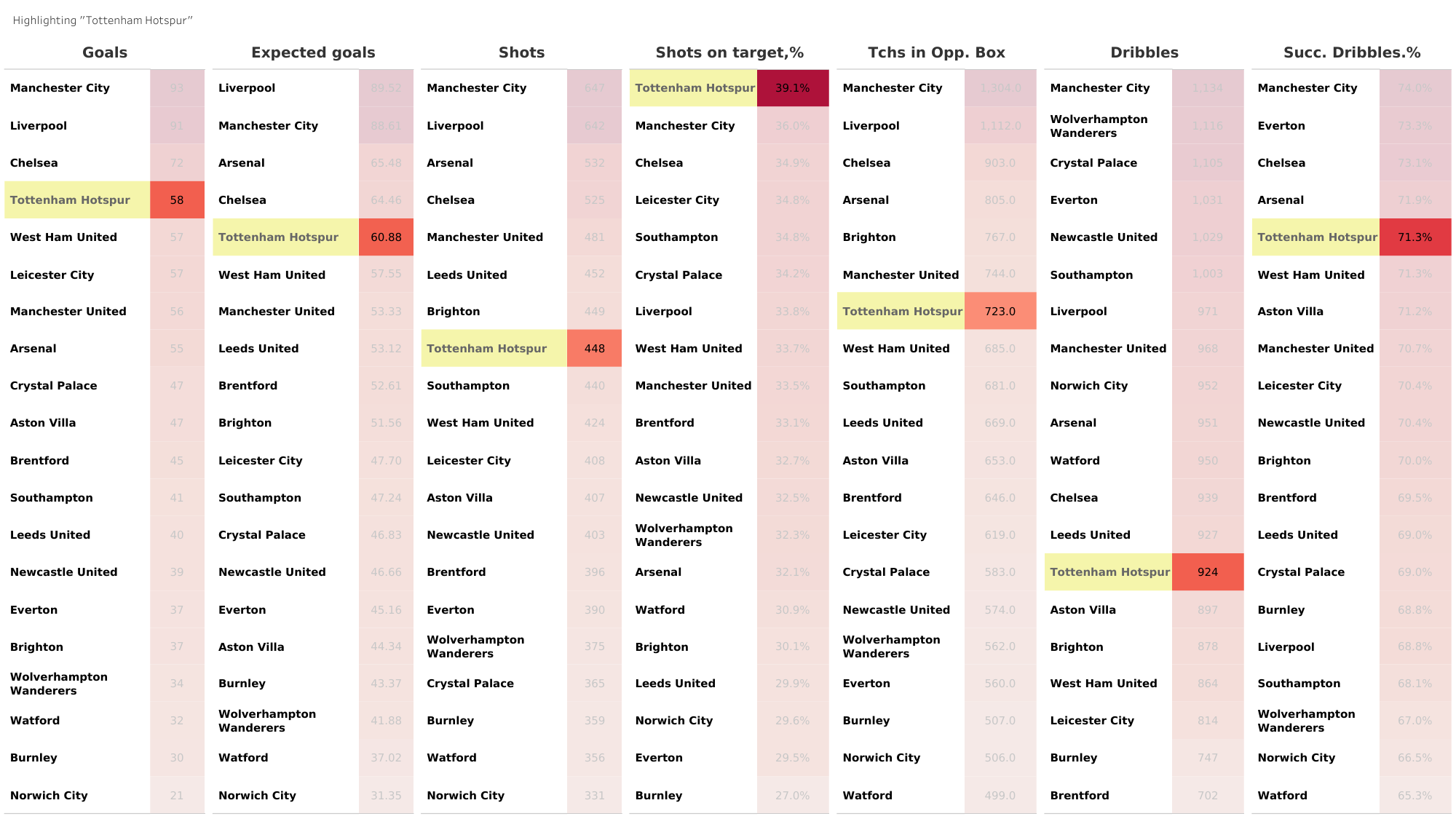 Displayed above are the attacking performances of Tottenham Hotspur in the Premier League this campaign. Spurs’ shooting accuracy is the highest this season, with 39.1% of their shots hitting the target. This is partly or mainly due to Son Heung-Min’s performances this season, with the Korean, and not Harry Kane, being the team’s leading goalscorer. Spurs also rank in the top five for dribble success rate.

Tottenham know that a win will seal the qualification for the 2022-23 UEFA Champions League and will go into this game fully focused. Even a draw might suffice for Spurs. But should they lose and Arsenal win, Spurs will be condemned to Europa League football next season.

The post Norwich City vs Tottenham Hotspur Preview: Shots on target, xG and more – what do the stats say? appeared first on Football analysis, news, betting and opinion from Spurs.