Leicester City will look to extend their unbeaten run to four games when they face Newcastle United at St. James’ Park in the English Premier League. The Foxes will be high on confidence after making a comeback in their recent UEFA Conference League match and advancing to the semi-final stage of the competition. The previous meeting between the two teams ended in a 4-0 result in favour of Leicester City. However, a lot of things have changed at the Newcastle United camp since then, and this could turn into an interesting tie.

Newcastle United continued to move up the English Premier League table under Eddie Howe after a 1-0 victory over Wolves in the previous round. The Magpies have now won eight, drawn ten and lost 13 games this season. They have scored past the opposition keeper 34 times, with an xG rate of 39.33. In return, their defence has been a bit leaky and conceded 54 goals with an xGA rate of 51.22. 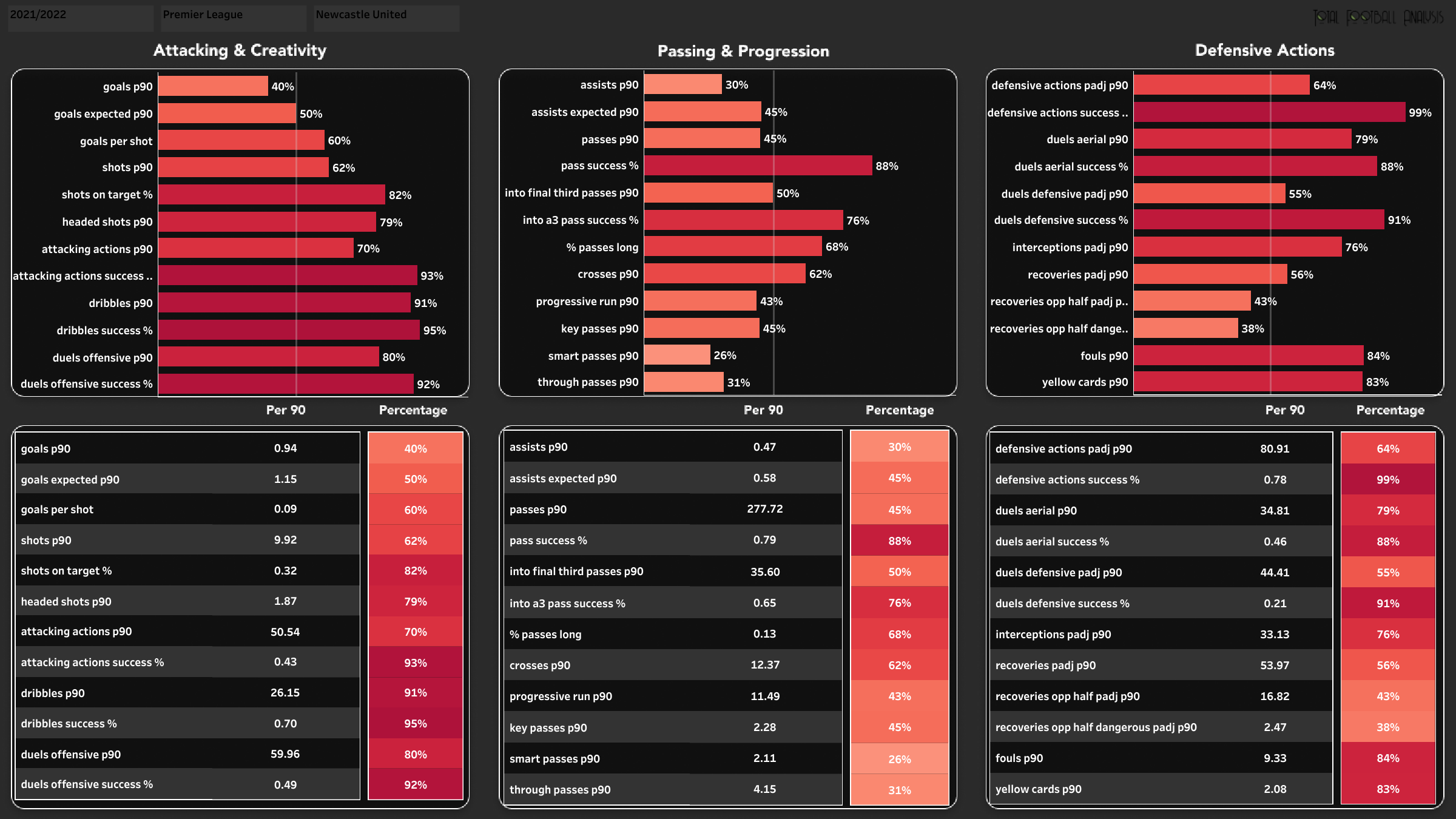 When looking at the above chart, the general rule is that the longer the bar, the better the performance—you can see the league average in the middle and the % is the percentile rank the player is in. By looking at the attacking and creativity charts, we can observe that Newcastle United struggled to score as well as create xG in the match. They do, however, have a high percentile rank when it comes to dribbles, offensive duels, and attacking action success rate. The main concern with the Magpies is their passing on the field, and they have a low percentile rank in almost every stat. Defensively, Newcastle United players are strong in the air but have made fewer recoveries inside the opposition half.

Callum Wilson and Kieran Trippier are still recovering from injuries and will remain out of contention for this game. Ryan Fraser got injured in the previous game and remains doubtful. There is some positive news as Joe Willock could make an early return to the squad.

Leicester City have played the fewest matches in the league and are climbing up the English Premier League table. Brendan Rodgers’ men have won 11, lost 11, and drawn seven games this season. They have netted 45 goals and conceded 48 in return. The xG and xGA rates of the Foxes are 37.9 and 59.31, respectively. They have the second-highest xGA rate in the league. 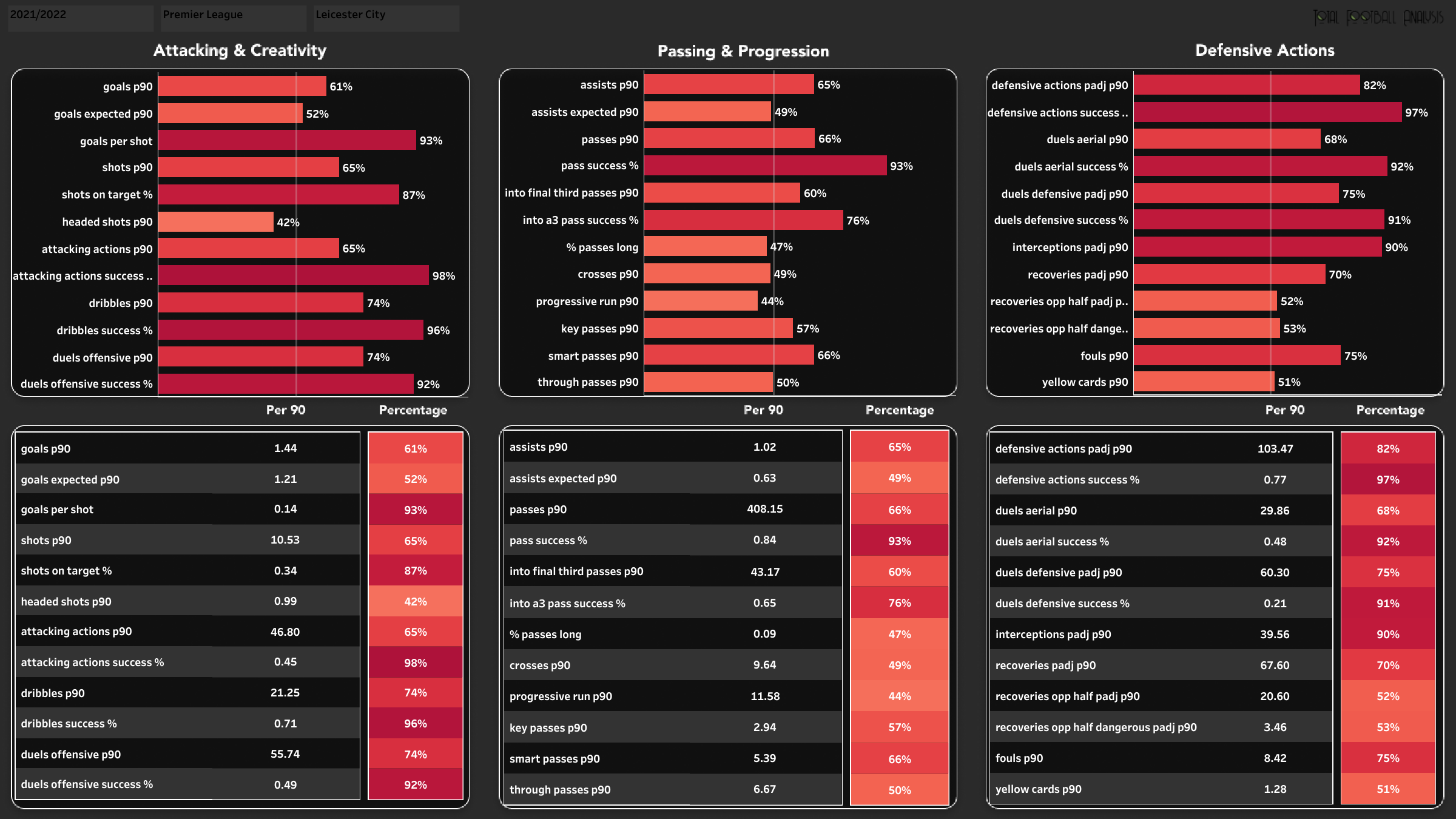 The Foxes have better-attacking stats than their opponents and have a high percentile rank in comparison to the other teams. They average more than ten shots per 90 minutes, with a shot accuracy rate of 34%. However, Brendan Rodgers’ men have the same problem as their opponents and have struggled to pass the ball. Leicester City are the lowest ball-crossers in the league. Notably, they are ranked above average for attempting passes into the final third, key passes and smart passes. Defensively, the team has performed above average and has a high interception rate among other teams in the league.

There are no fresh injury concerns for the Foxes, but the manager could make some changes from their 2-1 victory over PSV Eindhoven.

Leicester City will be high on confidence and look for back-to-back wins. Both teams have played well since the start of this calendar year and will hope for a strong finish to this season.