Chelsea travel to Old Trafford to take on Manchester United in the English Premier League. The Blues will be high on confidence after scoring a late goal that earned them three points against West Ham United. Manchester United, on the other hand, are struggling and have lost back-to-back games. They are falling short on points in the race for the top-four positions. These two teams settled for a 1-1 draw when they met last time in the league.

The home team has played 34 games, winning 15 and losing ten of them. They’ve won nine of the 17 games they’ve played at home while losing four. This season, the Red Devils have scored 53 goals with an xG rate of 50.09. In exchange, they’ve given up 51 goals for an xGA rate of 52.92. They have only scored five goals in their last five games. The above viz shows that Manchester United have the third-best match tempo in the league and are only ranked after Liverpool and Chelsea in the list. 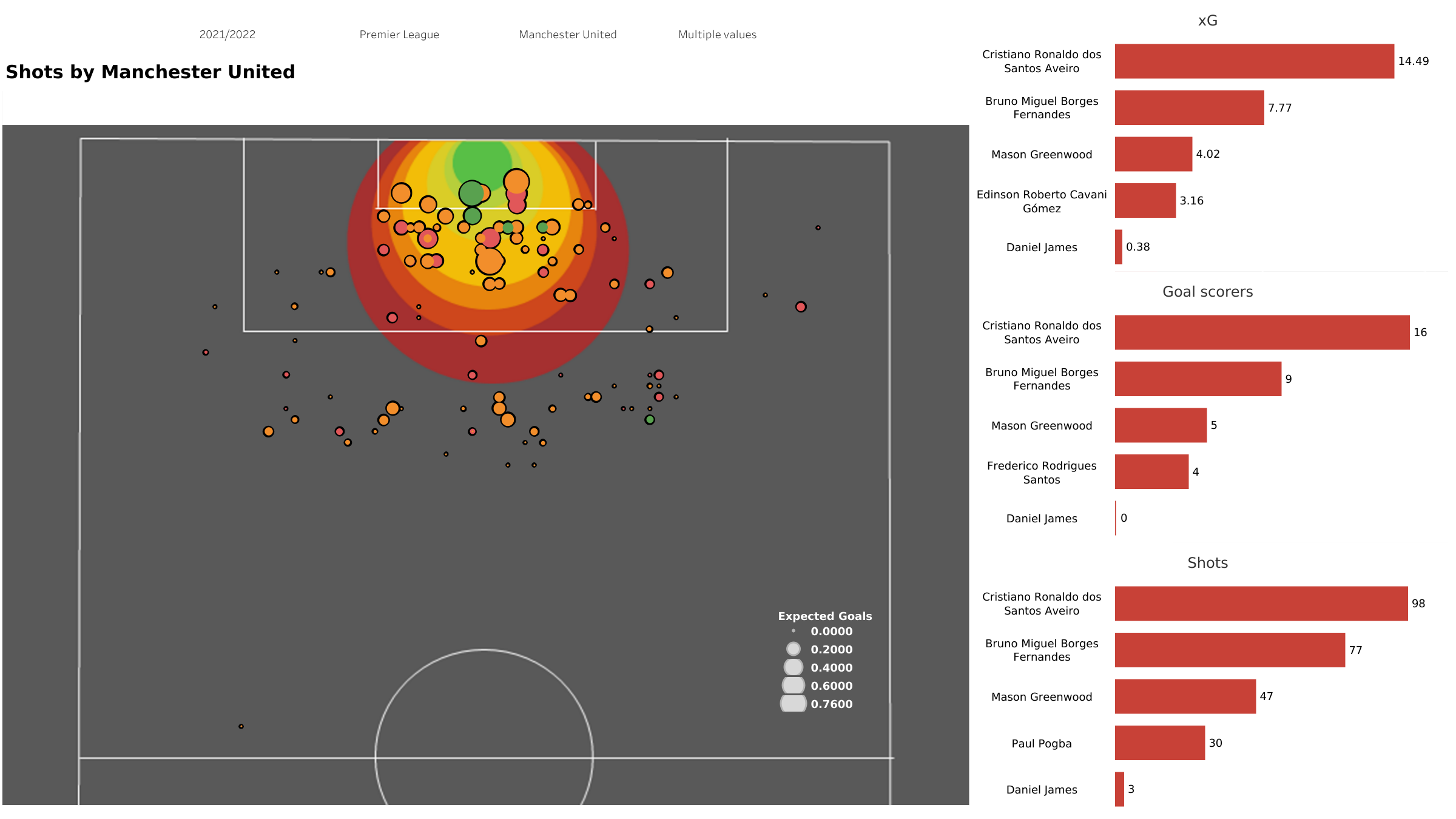 This season, Manchester United have tried 452 shots, averaging 12.2 attempts per 90 minutes. Manchester United’s players have hit the target 162 times and have an average of over four shots on target per 90 minutes. In total, 273 shots were tried from inside the opponent’s penalty box, with 114 of them finding the target. The home team has struggled to score goals from set-pieces, and this can be observed from the above viz. Manchester United have scored five goals from corners and free-kicks, and the last goal was the hat-trick goal scored by Cristiano Ronaldo via a direct free-kick.

For this match, Manchester United will be without Luke Shaw, Edinson Cavani, Fred, and Paul Pogba. Raphael Varane was recalled to the starting lineup against Arsenal and is expected to keep his place. He and Harry Maguire, who was on the bench against Arsenal, might create a defensive partnership.

This season, Chelsea have won 19, drawn eight, and lost five games. They’ve won three and lost two of their previous five games. The team of Thomas Tuchel has the league’s second-best away record. Chelsea have won 11 of their 16 games played away from home. They have 36 out of a possible 48 points. In total, the Blues have scored 67 goals and conceded 27. The team’s xG rate is 56.97, while the xGA rate is 30.7, which is the second-lowest. The above viz shows that Chelsea players have attempted 1,974 passes into the opposition’s final third. Of these 1,974 passes, 797 were successful. 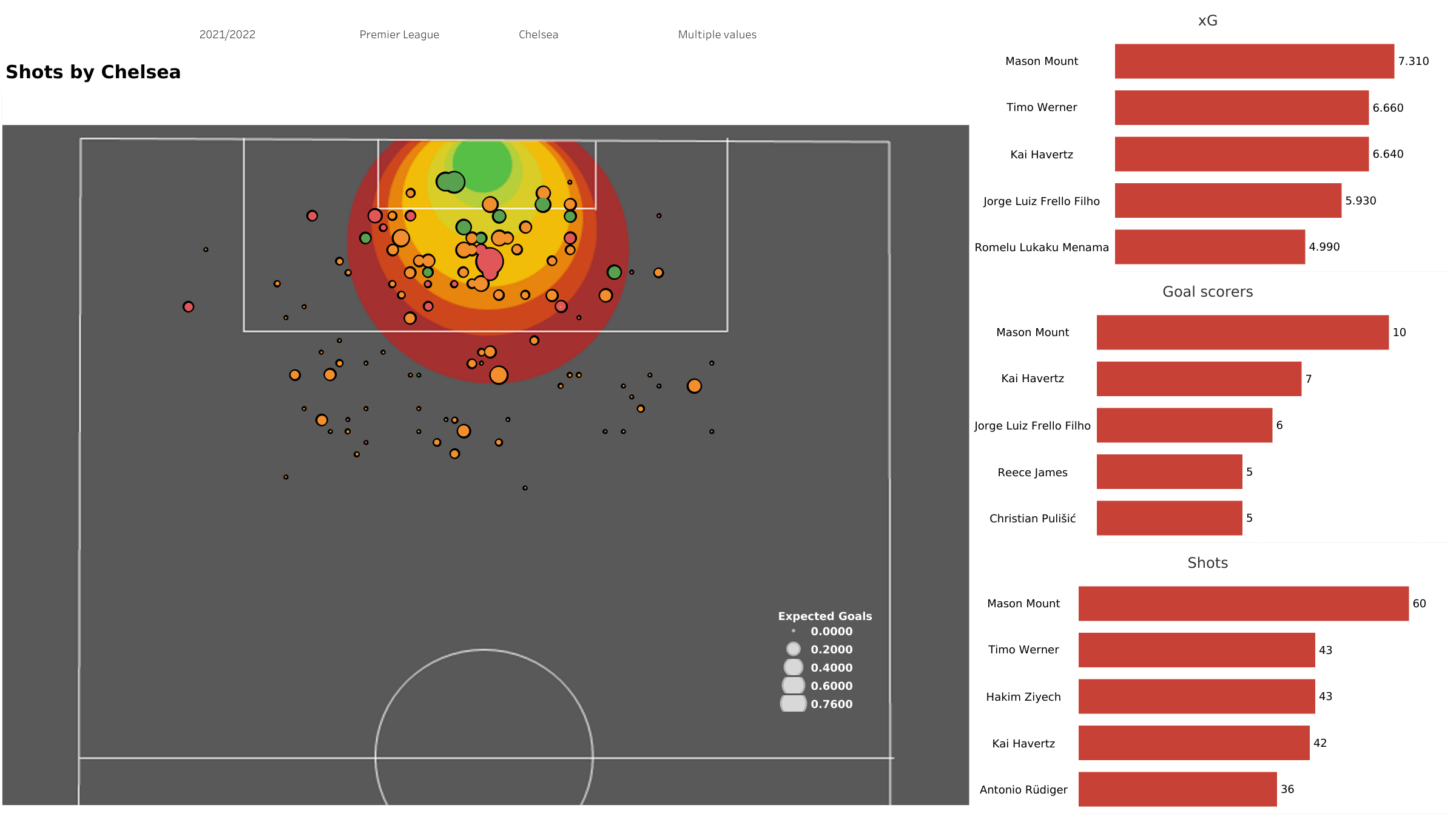 Chelsea have tried 457 shots this season, with 172 of them finding the target. The Blues take around 13 shots per 90 minutes on average, with 4.95 of them finding the target. A total of 284 shots from inside the opposition’s penalty box have been tried, with 126 of them hitting the target. Chelsea players have scored quite a few more goals from set-pieces than their opponents. Their defenders are dangerous in the air during corners and free-kicks. They create a lot of chances going forward.

Callum Hudson-Odoi, Ben Chilwell, and Mateo Kovacic will all miss the match due to injuries. After missing the previous game due to injury, Antonio Rudiger, Andreas Christensen, and Reece James could return to the starting lineup.

Chelsea go as the favourites for this game due to their impressive away record. They will look to continue their winning momentum against a struggling Manchester United side. Ralf Rangnick’s men are in desperate need of three points if they want to keep any chance of their UEFA Champions League qualification alive.

The post Manchester United vs Chelsea Preview: Match tempo, passes into final third, xG and more – what do the stats say? appeared first on Football analysis, news, betting and opinion from Chelsea.