Liverpool will look to open their account in the UEFA Champions League 2022/23 when they face Ajax at Anfield. Liverpool lost their opening game against Napoli 4-1 and are third in Group-A. Ajax leads the group on goal difference and will aim to continue their 100% record in the elite tournament.

Liverpool had to face a defeat in their first match away at Napoli. Jurgen Klopp’s men were unable to find their rhythm in the match and committed a few mistakes that cost them the match.

Ajax earned an easy 4-0 win at home against Rangers in their Group A encounter. The Dutch club dominated against the Scottish club and will be eyeing knockout stage qualification.

We look at some of the stats that could predict the outcome of the match. 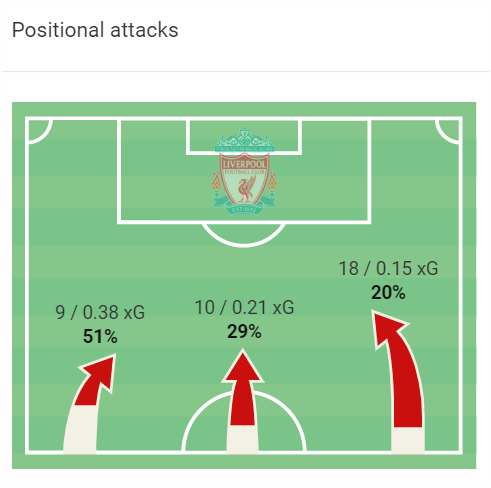 Liverpool had 60.36% possession in the last match and created 37 positional attacks. The Reds attempted eight shots from these attacks and most of the attacks came from the right side. Trent Alexander-Arnold likes to make attacking runs from the right side and give support to Mohamed Salah. Liverpool managed 15 shots, with a 46.67% shot accuracy rate. Luis Diaz is a threat from the left side and is capable of winning the match for his team. 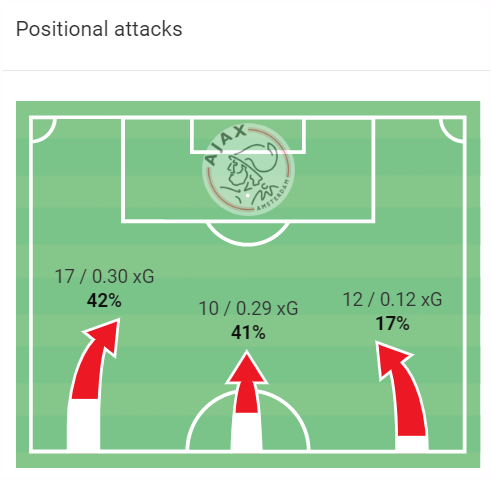 Ajax showed total dominance against Rangers and ended the match with 72.2% of the ball possession. They were able to create 39 positional attacks and attempted ten shots from these matches. Most of the attacks were created from the left side. Ajax players had 16 shots attempted and managed to hit the target nine times. Ajax will look to exploit Liverpool’s shaky defence and score a goal or two.

“Battle of the defences” 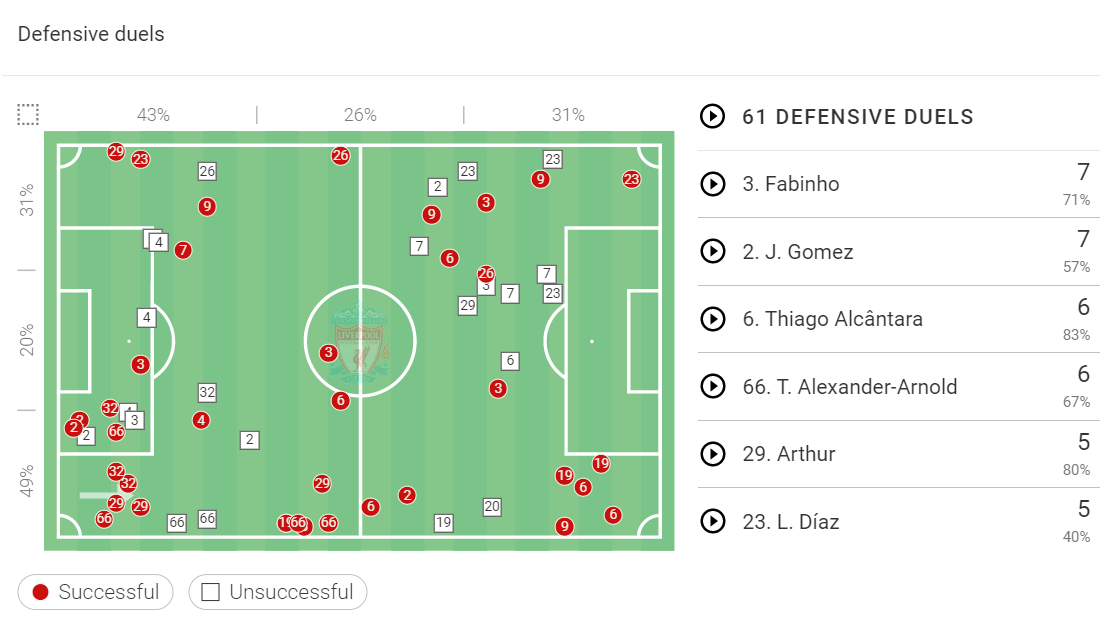 Liverpool contested 168 duels in the last match and won 81. They won 38 defensive duels and most of them came on the right side. They need to defend well against Ajax’s attacks and defend the goal. 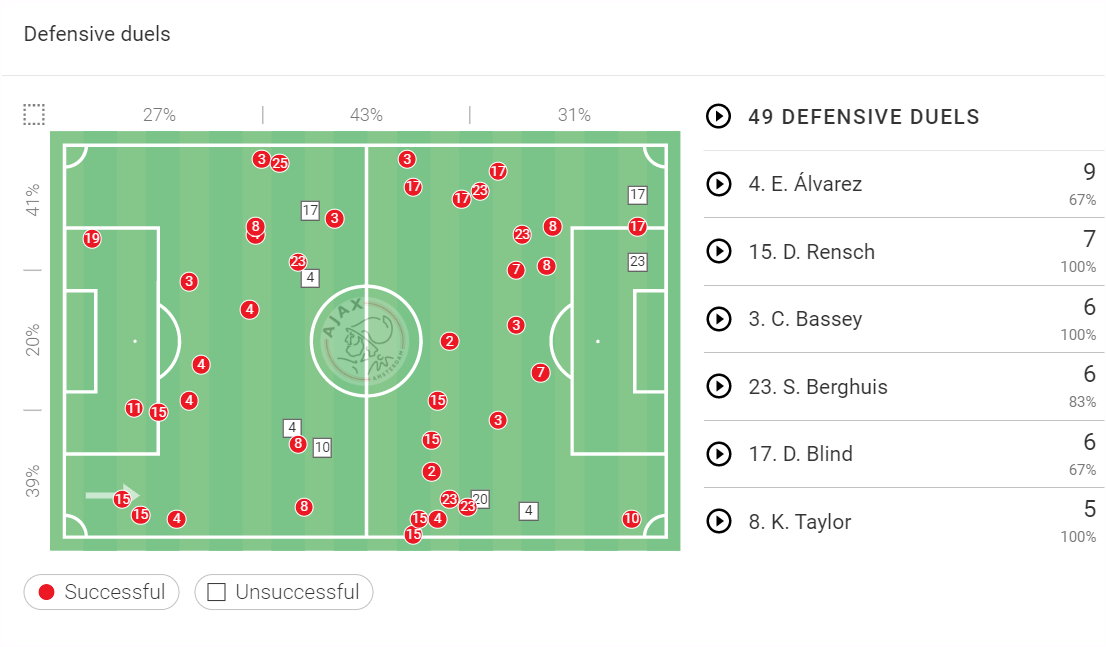 Ajax contested 169 duels and won 85. These included 41 defensive duel wins and will be a tough team to beat for Liverpool. Ajax have an in-form team and they need to give the same defensive performance against an attacking side. 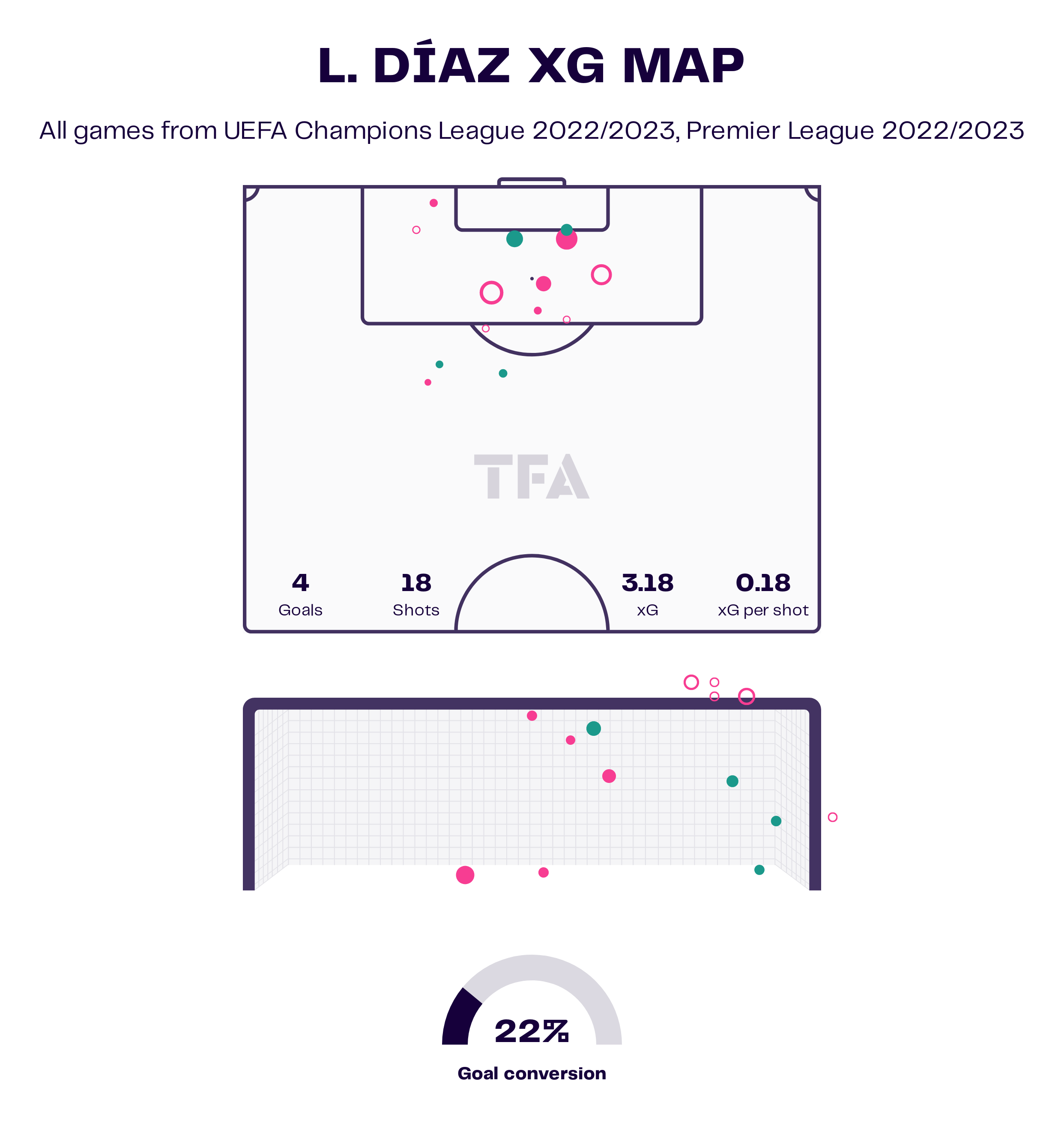 Luis Diaz will play a key role for Liverpool in this match. He has scored four goals in seven games and will look to add more goals to his tally. The left forward averages two shots per match and has a high xG rate. He will be a key figure in Liverpool’s attack. 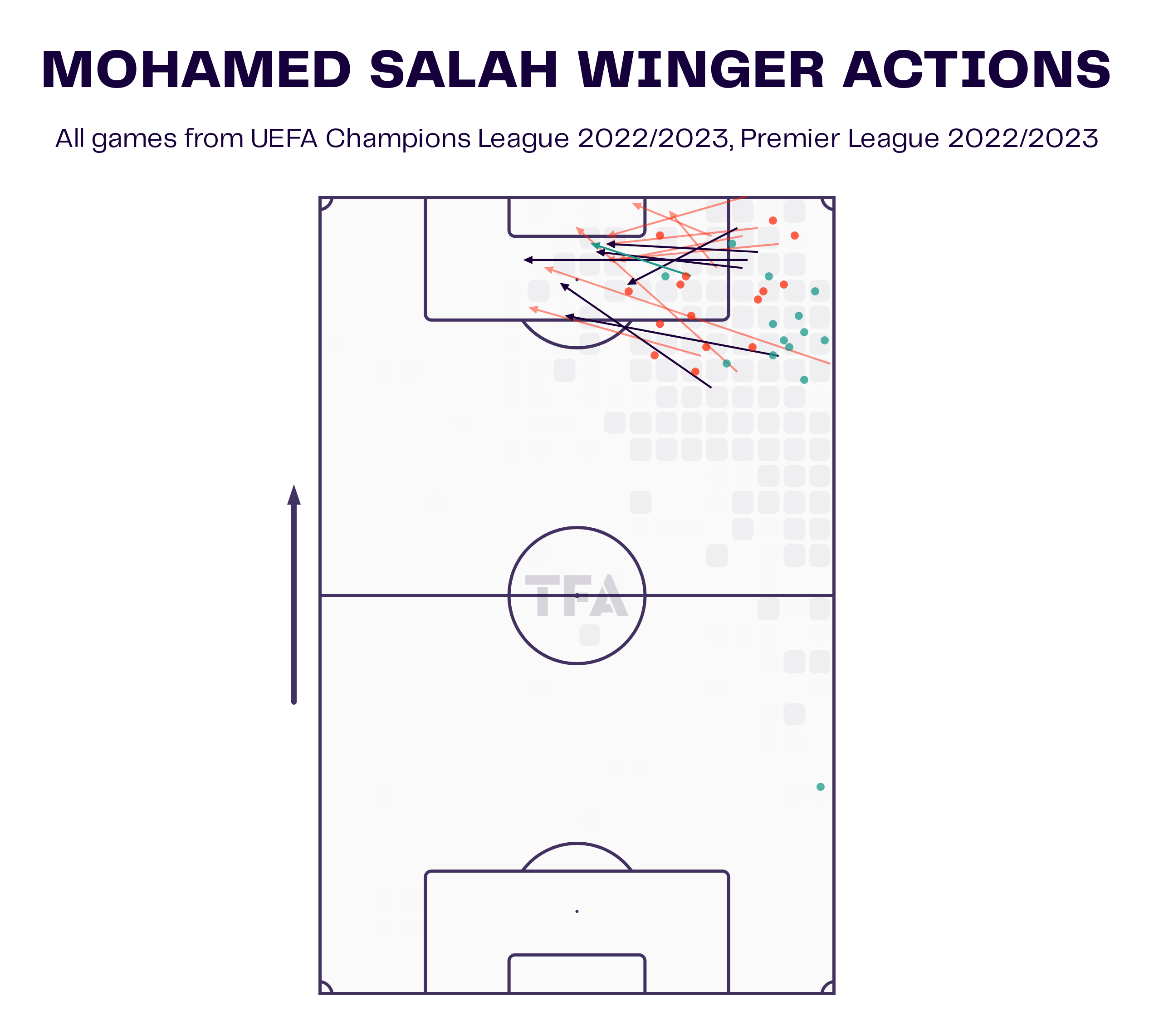 Another key player for Liverpool will be Mohamed Salah. The Egyptian is yet to show consistency this season but will play a key role in this match. He has scored two goals. Salah likes to dribble past opponents and deliver crosses into the penalty box. The manager will expect him to contribute more in this match. In the above viz, the green dot shows the successful dribble and the black arrows show the crosses that were successfully delivered. The green arrow shows an assist. We can observe that Salah has created a lot of chances from the right side and can chip in with a few assists. 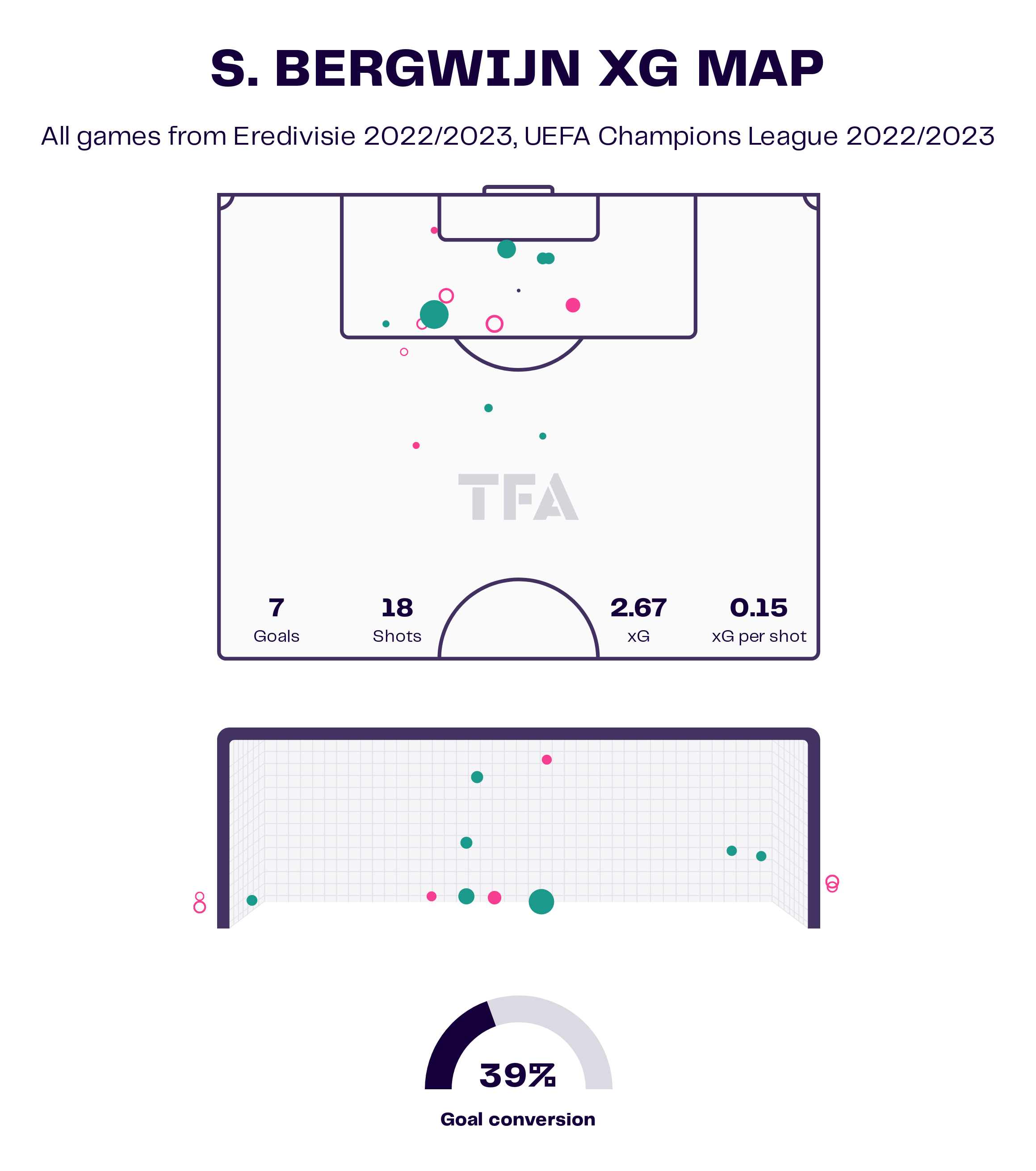 Ajax’s Steven Begwijn will be a key figure in their attacks. He has scored seven goals this season in seven appearances, and this also includes a UEFA Champions League goal. The winger operates on the left side and will look to beat Liverpool players with his skills and pace.

Jurgen Klopp will be delighted to have Thiago Alcantara back in the squad. Fabio Carvalho is also fit and he has a high chance of coming off the bench. Joel Matip is also expected to start ahead of Joe Gomez. Andy Robertson is ruled out of the match and will be a big miss for the German manager.

There are no new injury concerns in Ajax camp. Owen Winjdal has returned from injury and is likely to remain on the bench.

Liverpool will look to capitalize on home advantage and earn their first win of the UEFA Champions League 2022/23 campaign. It won’t be easy for them to beat this Ajax squad who are high on confidence and have a 100% record in all competitions all this season. This could turn out to be a high-scoring game.

The post Liverpool vs Ajax Preview: 3 key trends to watch out for according to the stats appeared first on Football analysis, news, betting and opinion from Liverpool.