Drawing up your tactics is perhaps the most intimidating task in Football Manager, especially for those just getting into the game. With numerous roles and instructions to choose from, it’s hard to know where to even begin. That is, however, just on the surface. With a closer look, as we will take in this article, building your tactics is an engaging, experimental, and never-ending process.

We all have our own ideal style of play, a result of the numerous influences we consume every day. In the beginning, the key is to identify this philosophy and use it as a guiding light in the process of building your tactics. Rather than blindly selecting roles and instructions, adhering to your philosophy allows for a direction and most importantly, an identity.

The issue is you don’t start from scratch, but rather with a team and its own players. While over the seasons we can mould the squad to our ideal plans, we must make sacrifices in the beginning. Finding a balance between your own ideals and your current options is consequently very important, as, for example, you can’t have overlapping fullbacks with defensive players.

This article builds on our initial squad assessment of Chelsea in FM23, which was published last week. Ahead of Football Manager 2023’s release date, we will look at various tasks and guides for the Blues. These guides can also be used as templates and adopted for a save of your liking. More specifically, this article aims to provide an initial tactical guide to Chelsea in FM23, looking at the best possible roles, instructions, and structures for the Blues.

In real life, Chelsea are going through a period of change. In Thomas Tuchel’s last few matches, especially due to the new signings, there was a lot of inconsistency in both the formation and the starting eleven. Now with Graham Potter, it is still unknown what Chelsea will look like under the former Brighton manager.

Chelsea’s squad is best characterised by its balanced and dynamic profile. There are no clear-cut starters, with most players in the squad being able to perform at a very high level. As far as positions, the players at Stamford Bridge are very versatile. As a consequence, the tactics must follow a similar style.

While we will certainly make full use of the three tactical slots, we will have an initial default structure. The famous 3-4-3, which recently led the Blues to a UEFA Champions League trophy, will be our initial formation. 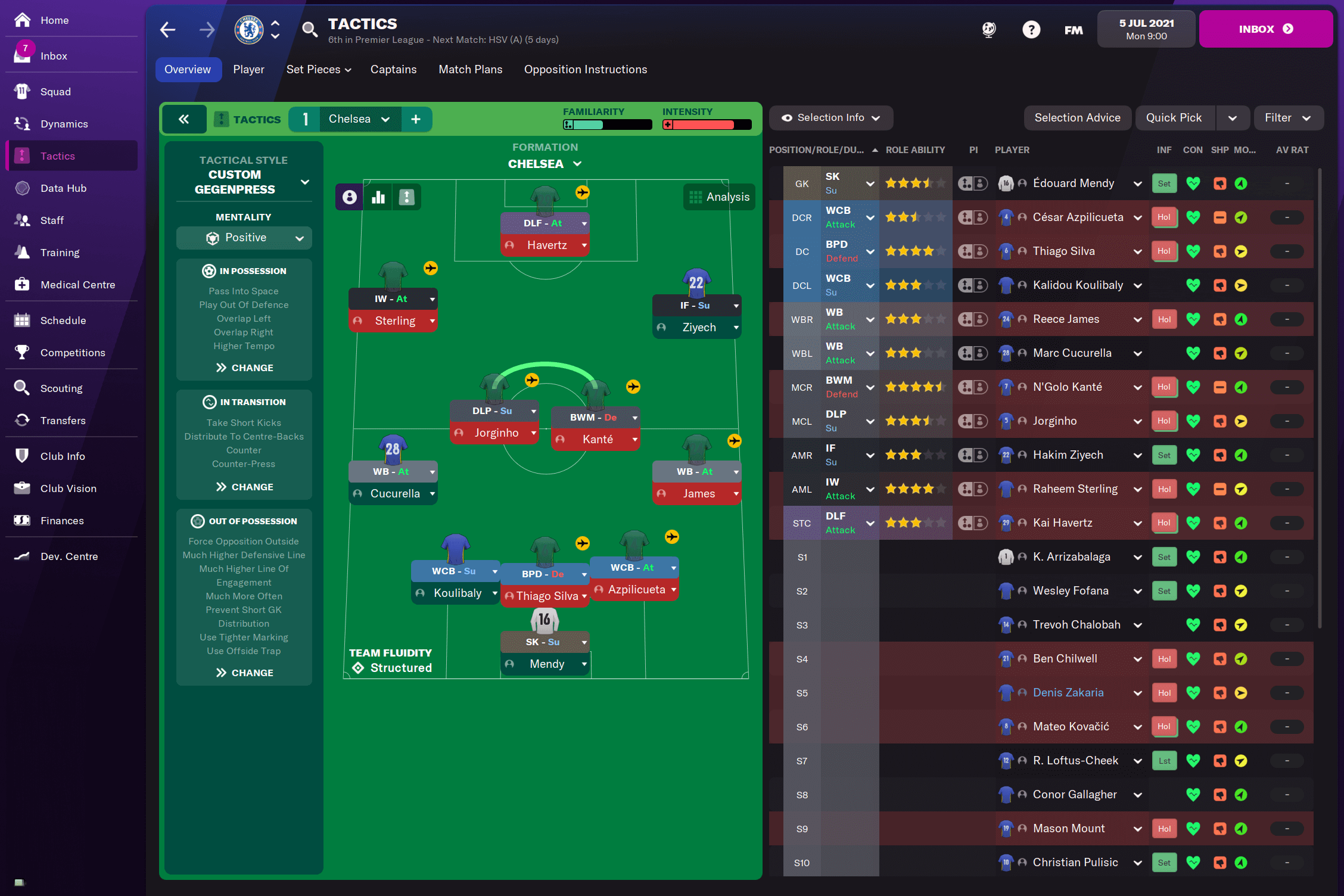 Obviously, as the season goes on, adjustments to the structure and line-up will be made here and there. Nonetheless, we will begin with this starting eleven. Édouard Mendy is in goal with the famous sweeper-keeper role on support. For the centre-backs, I’ve gone with Cesar Azpilicueta, Thiago Silva, and Kalidou Koulibaly. Thiago Silva is in the central position with a ball-playing defender role. On his sides, Koulibaly and Azpilicueta are the wide centre-backs. Since Azpi is originally a fullback, he is on an attacking duty while Koulibaly is on support. To complete the backline, Reece James and Marc Cucurella are the wing-backs.

In the midfield, Jorginho and N’Golo Kanté form perhaps the most balanced duo in world football. Kanté is the destroyer while Jorginho is the creator. Ahead of them, Hakim Ziyech is an inside forward on the right while Raheem Sterling is an inverted winger on the left. Finally, Kai Havertz is a deep-lying forward up top, a role that maximises his creative interactions with his teammates.

Overall, the aim is to find balance. In each section of the pitch and as a whole, the collective must be balanced in its duties and roles. While the duties balance the players’ behaviour, the roles allow you to ensure your desired player distribution throughout the pitch.

While the 3-4-3 is our default formation, depending on availability and situations, there are numerous other structures we will use. In the last section of this article, we will go through these variations more in-depth.

While the formations were quite complex and dynamic, the instructions in possession are simpler. As far as mentality, we have gone with positive. With Chelsea, you will be good enough to dominate the majority of your matches, and in this mentality, you will be able to do so in a more controlled manner.

The attacking width is set to fairly wide in an effort to maximise the playing area and get the most out of the wing-backs. With such a creative and talented squad, it is best to limit the instructions and maximise the freedom. The passing directness is left at default, so it will be according to the mentality. The tempo, on the other hand, is set slightly higher. Finally, the team is instructed to play out of defence and look for overlapping opportunities in the final third. 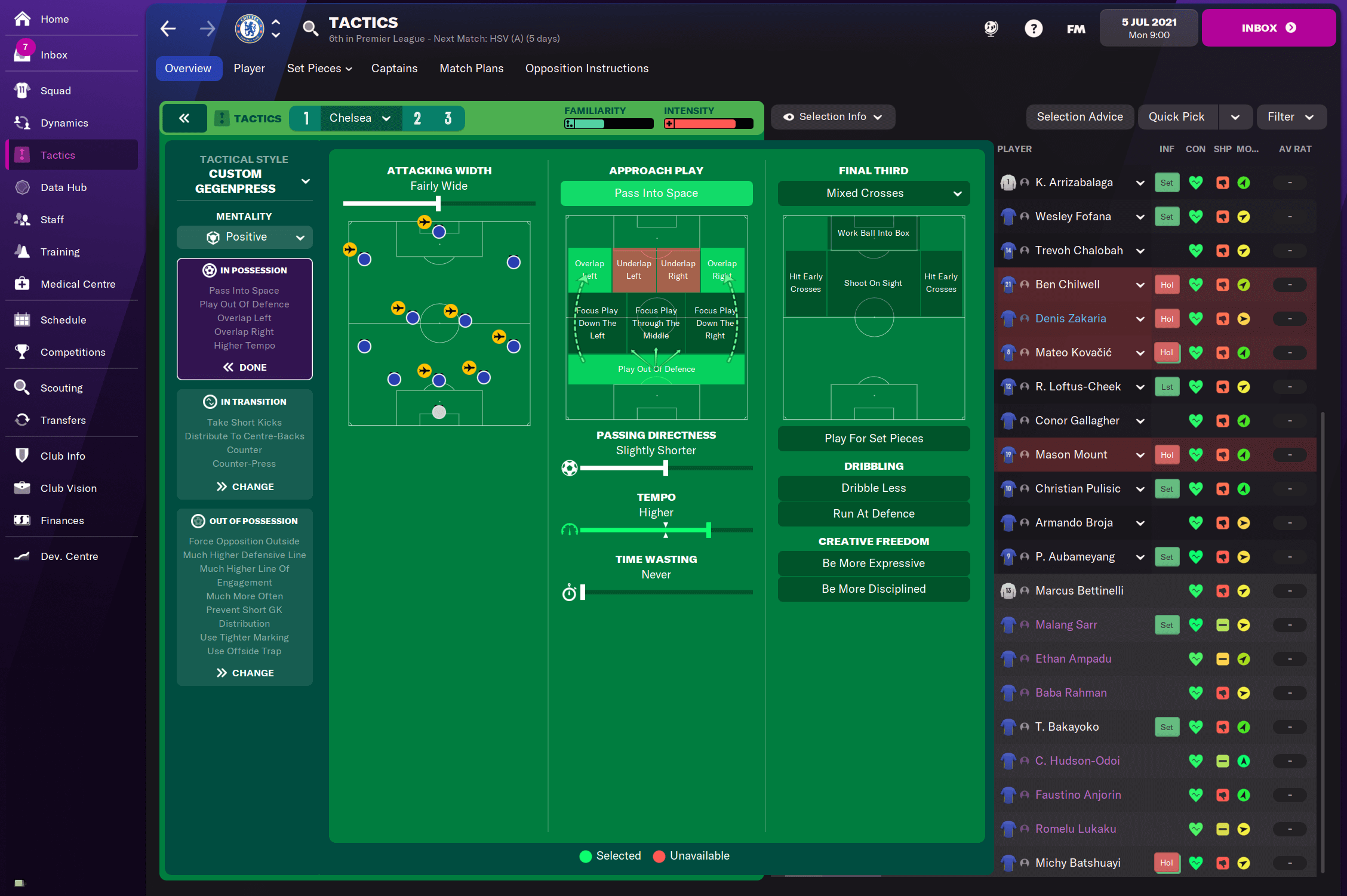 Overall, the instructions in possession are very simple. There will be instances, however, depending on opposition and match scenario, where these will obviously change. At any rate, these instructions set us up with a simple and dominant system to build from. With this Chelsea side, the key is being dynamic. This squad is perfectly built for variations and an adaptable play style.

When looking at transitions, both offensively and defensively, the instructions are fairly straightforward. For Chelsea, counter-pressing is non-negotiable. Going forward, launching counterattacks after regaining possession is also the best option.

As far as distribution, I have kept it simple. This part is entirely up to you, but with three centre-backs, it is best to begin build-up through them. Similarly, the goalkeeper is instructed to take short kicks and initiate a controlled build-up. 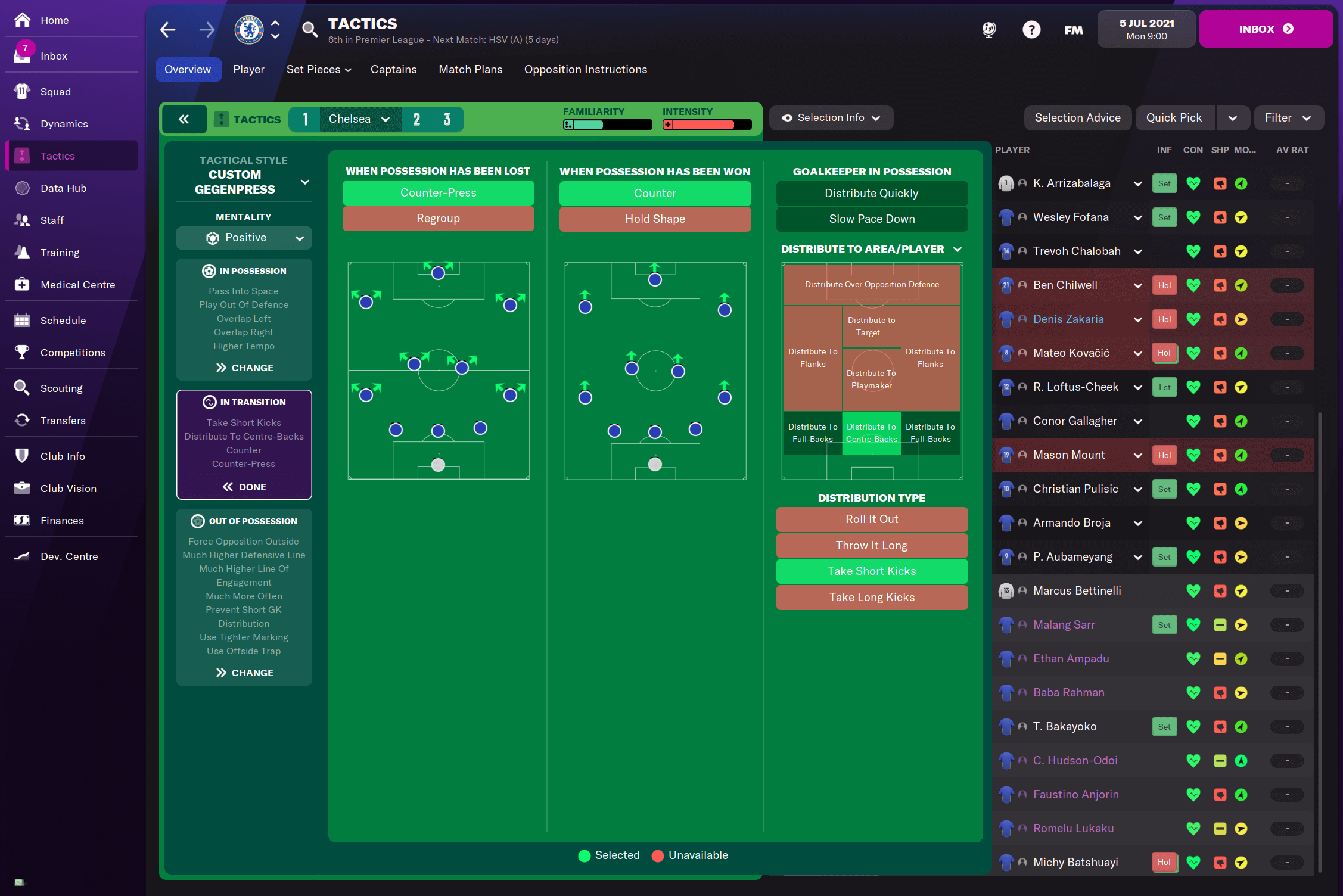 There is not much room to change around in these phases of play but selecting these instructions will ensure the dominance expected at a club like Chelsea. Allowing the goalkeeper freedom to choose the distribution area and type may result in more vertical and risky balls. While there is a time for this, from the start, it is better to instruct a controlled build-up.

The final instructions are regarding the team’s behaviour out of possession. In this phase of play, it is important to maintain consistency with the mentality and philosophy adopted in other phases.

We begin with a high block, where the defensive line and the line of engagement are both set much higher. The offside trap is a controversial topic in FM, and at the end of the day, it is entirely up to you. Finally, the defensive width is set to force the opposition outside. In this shape, we have two wide players. Consequently, we want to force the opposition to the wide areas and use the touchline as an extra defender.

While that takes care of the structure of the defensive organisation, we must also instruct its behaviour. Tighter marking is selected alongside the instruction to prevent short goalkeeper distribution. Additionally, the pressing is set to much more often. The tackling is best to leave open, but there will be a time and place for either option. 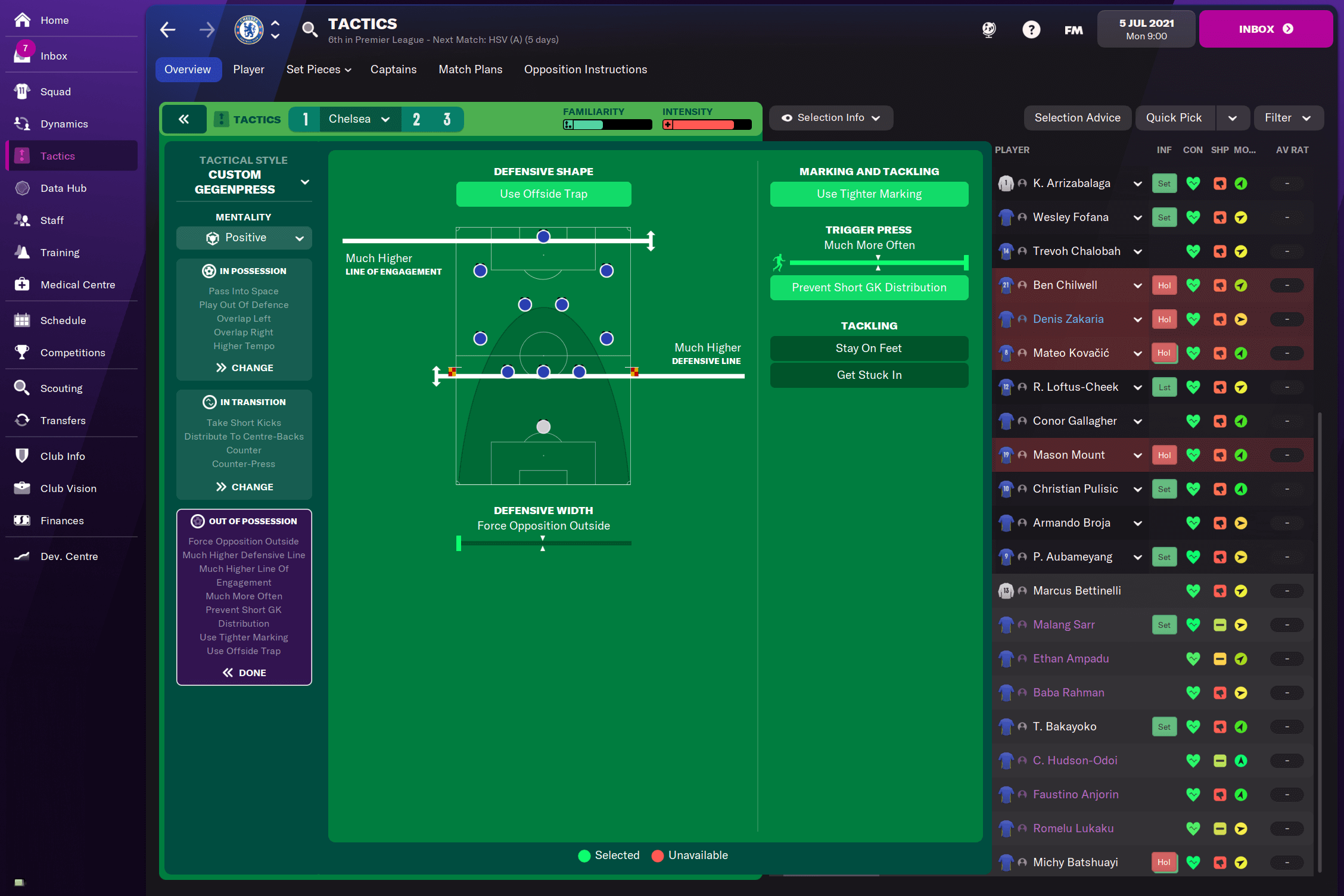 As previously stated, the key to this Chelsea squad is being dynamic. While the instructions can be preserved, for the most part, it is important to keep the structure flexible. Especially in the attack, the players are far from similar, with very distinct characteristics and tendencies. Additionally, maintaining a constant rotation of structure and systems keeps the game from picking up your system and being able to predict it. If a similar tactical system is maintained for too long, the AI begins to pick up on it. Considering these factors, we will adopt some tactical variations.

It is important to remind that these are far from standard. As we begin our Chelsea FM23 save later this year, our tactical systems will be constantly adapted and tweaked. As for any tactical system, it is a touch-and-go situation.

The first variation follows our three-at-the-back structure. As a matter of fact, our whole backline and midfield duo is maintained. The attack, however, is completely different. This variation aims to maximise the creativity of players like Mason Mount and Hakim Ziyech, making them the centre-piece of this attack. Ahead of them, there is a striker partnership between Havertz and Pierre-Emerick Aubameyang. Similar to the other formation, the German centre-forward is set as a deep-lying forward on support duty. On his side, Auba is a traditional advanced forward. 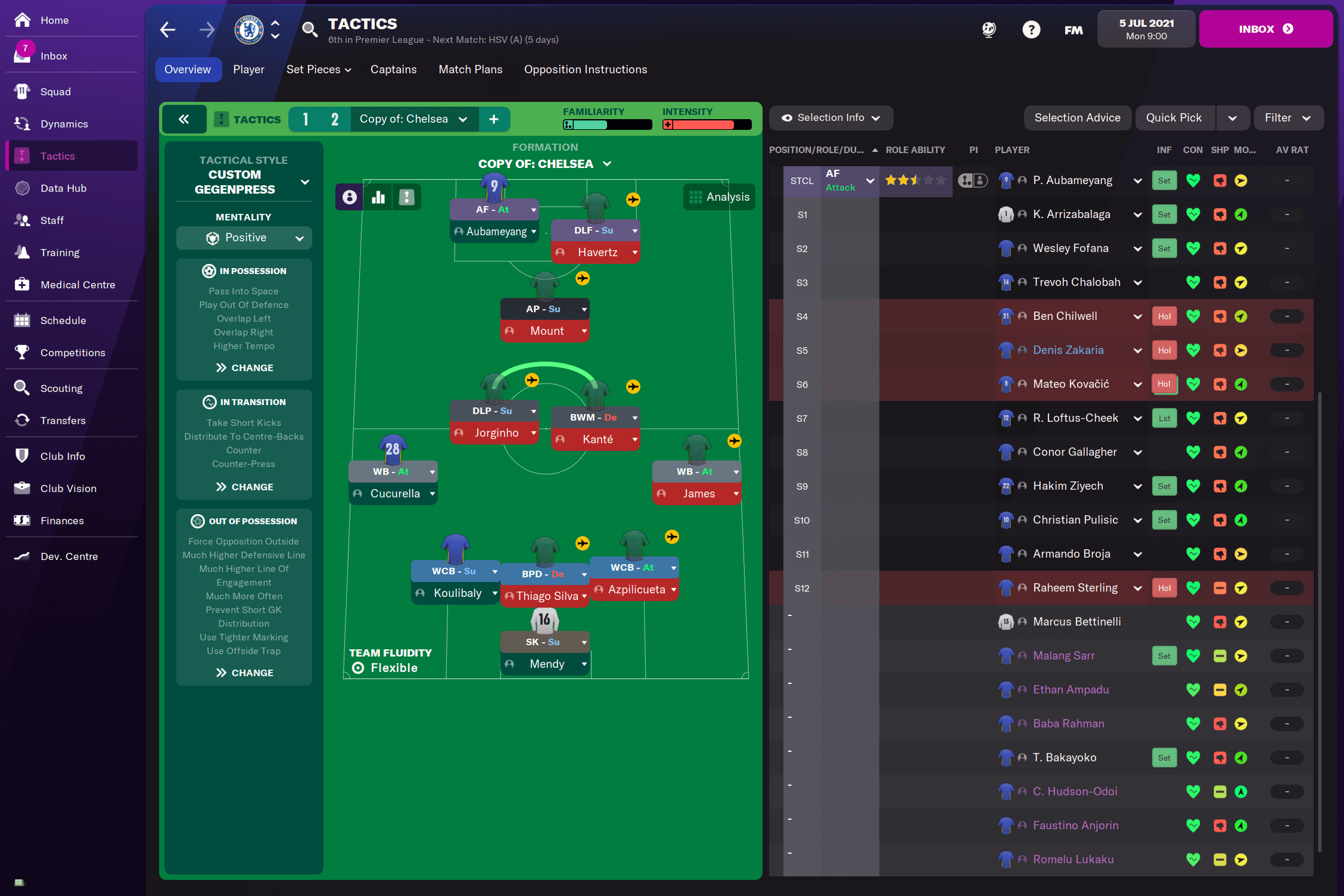 Our second variation maintains a striker partnership but modifies the midfield. With a total of six midfield players, – seven if you include Mount – this formation aims to make use of this depth in the middle of the park. This 3-5-2 has a midfield trio with Jorginho sitting behind Kanté and Mateo Kovačić. While Jorginho is set as a deep-lying playmaker on defend duty, Kanté and Kovačić are central midfielders. Kovačić is more attacking while Kanté is instructed to support. These roles and duties ensure maximum balance in the middle of the park. 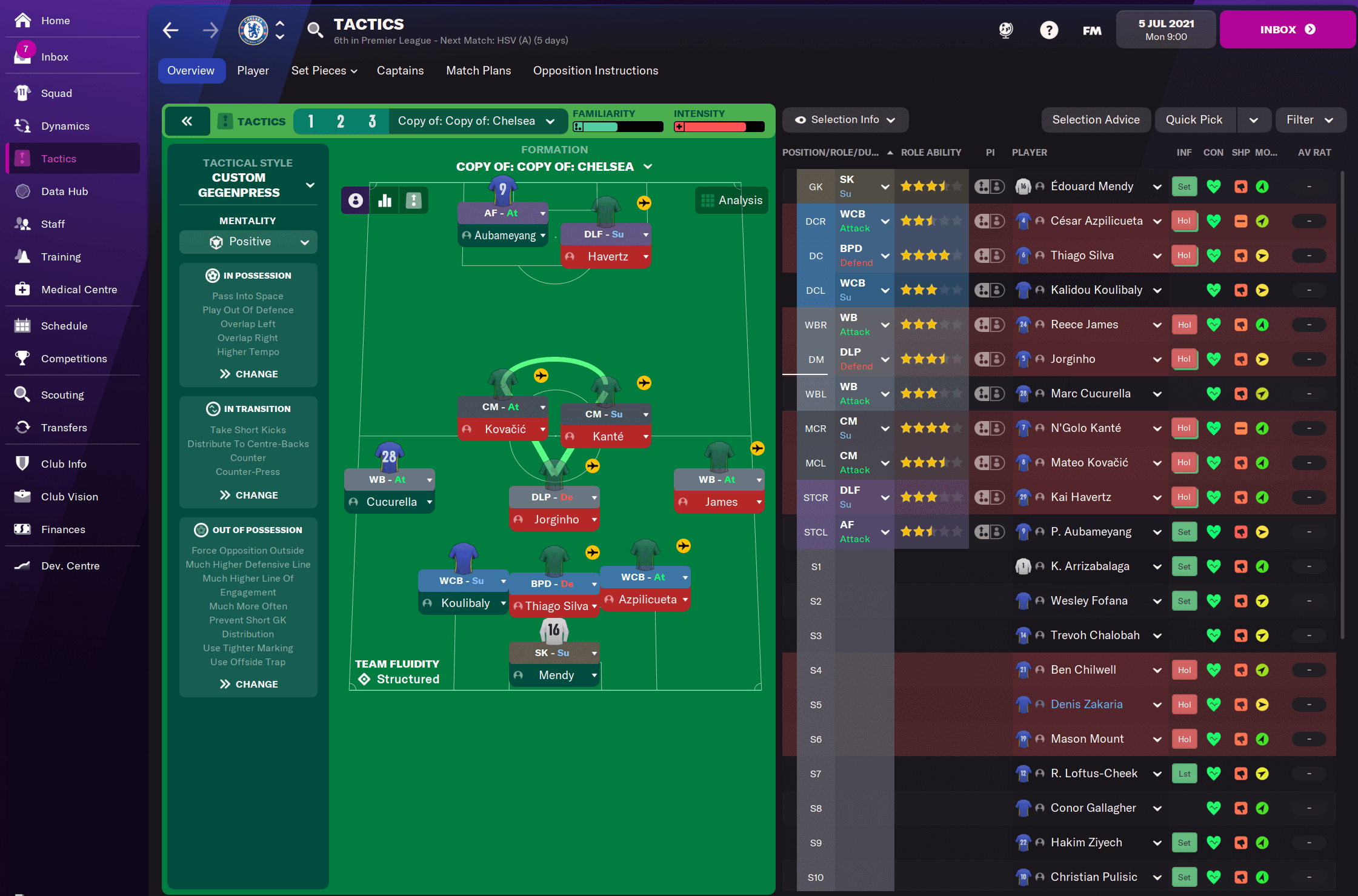 This final variation sees us go to a back four. For the most part, the players and roles are a combination of the default formation and second variation. The front three are the same as our default system, and the midfield is the same as our second variation. The backline, however, turns into a back four. The fullbacks are the same, with Cucurella and James both as full-backs on attacking duty. For the centre-backs, you can choose any from Azpi, Thiago Silva, and Koulibaly. 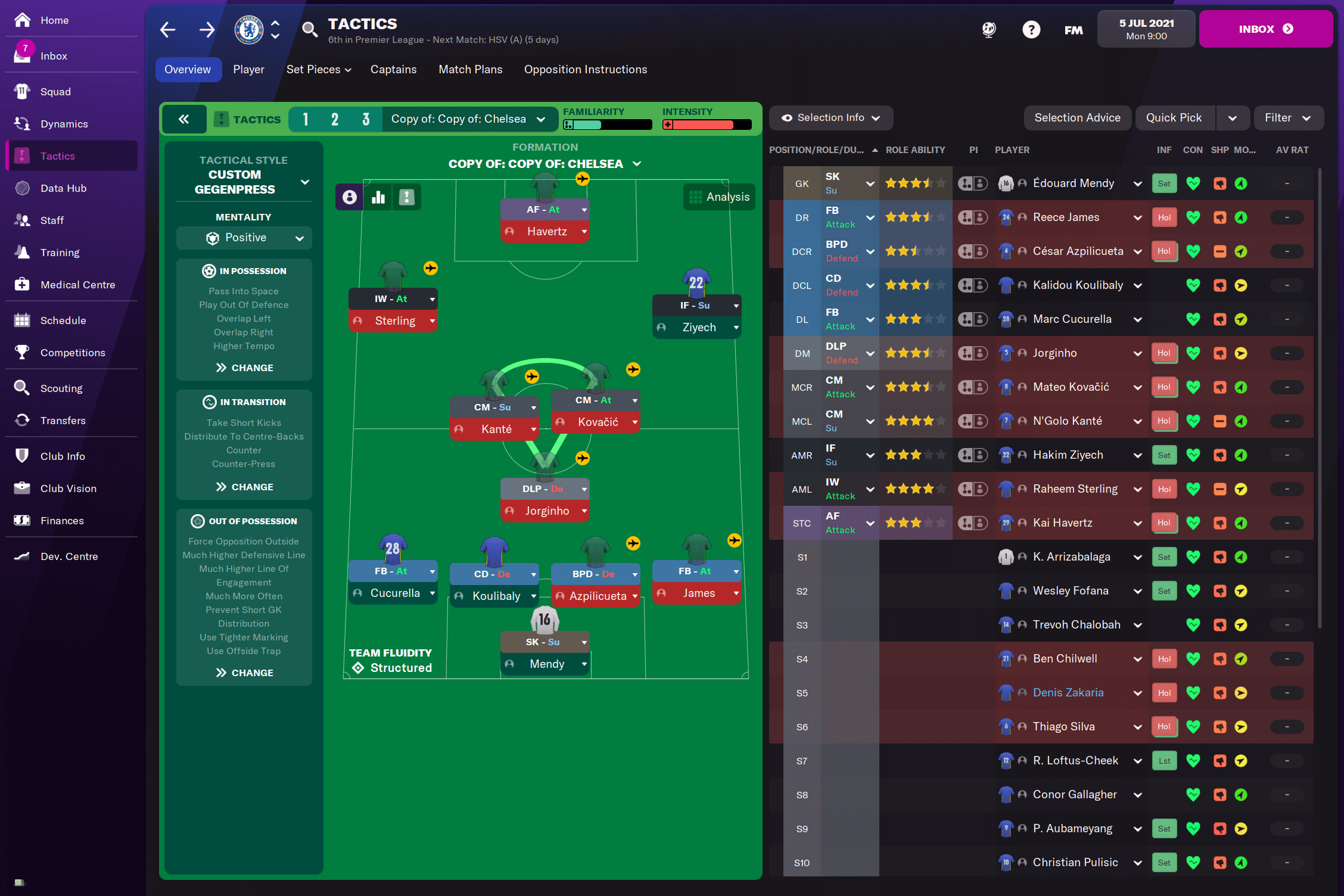 In summary, there are many variations to choose from. The overall purpose of these variations is to get the best out of the Blues’ squad and maintain a healthy tactical rotation. The first system is more of a default one to build from, while the others are more specific.

Tactics are a complex task to take care of in FM, but when done with a guiding philosophy in mind, they can be fairly simple. The main key is to maintain balance and consistency. In this article, as we look forward to the release of FM23, we have looked at the best tactics for Chelsea. With many variations, we created an adaptable and dynamic tactical setup.

The post Football Manager 2023: The best tactics for Chelsea in FM23 appeared first on Football analysis, news, betting and opinion from Chelsea.