First things first, I’d like to offer my apologies for the awful pun.

Right so, last time out we looked here at the similarities between mine and Mikel Arteta’s transfer philosophy and the different categories of players that we look at when deciding upon which of our transfer targets to sign. If you read that last one, you might as well skip on ahead, but for the rest of you, I’ll do a quick recap.

Category A – Low-money gambles that you’re pretty much guaranteed to make a profit on. Unlikely to come in and start straight away, they’re usually either young and need some more first-team experience out on loan or will come in as a rotation option and have to earn their place.

Category B – Players that have been playing well at a lower level and have earnt their move and their chance to prove their worth at a higher level. These players will usually have been signed with the intention of making an immediate impact in the first team, and due to the selling clubs’ reluctance to let him go (as one of their best players) commands a considerable fee.

Category C – Players that are playing for clubs at a higher level than Arsenal but struggling to properly establish themselves in their star-studded lineup. Still young enough to improve, they may command a big fee, but their quality is usually more assured and they’re less of a gamble than those in Category B. In Arsenal’s case, we’ll be looking at players who play for clubs who would expect to get to the latter round of the Champions League, the likes of Real Madrid, Barcelona, Juventus etc. 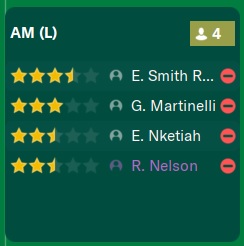 Whilst last time out we identified some potential targets for that defensive midfield role due to Partey and Xhaka approaching an age that I’d begin to look at cashing in for them before they lose their resale value, it’s a completely different kettle of fish in this time around when looking at the options out on the left wing. On paper, Martinelli and Smith Rowe provide two quality, young options that offer different qualities depending on what you’re asking for from your wingers. 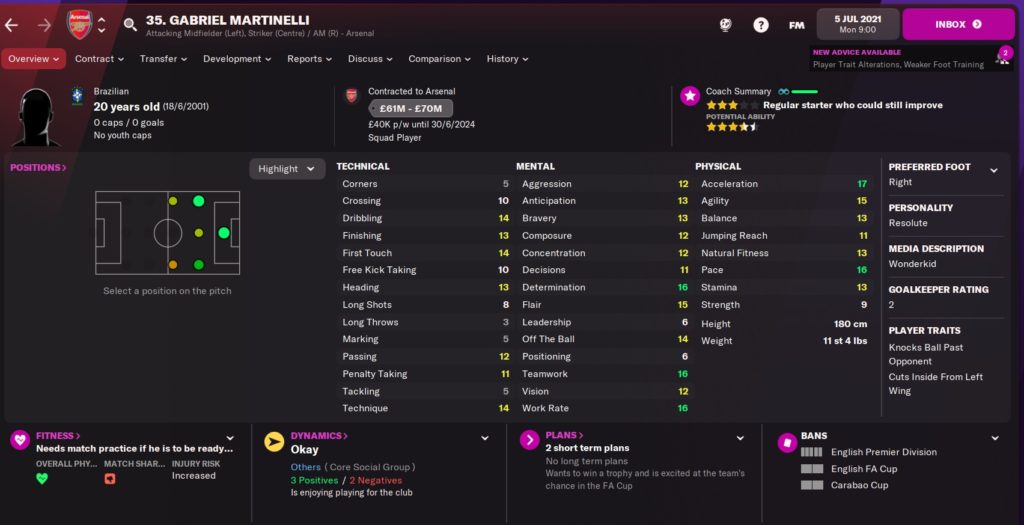 In Martinelli you have a speedy, attacking goal threat provided you can bump up his finishing (13) and composure (12) a little bit, although I’m predicting they’ll be given a boost in FM23 anyway. Right footed, I think he’ll prove to be a very good option cutting inside onto his stronger foot in the mold of a modern inside forward. 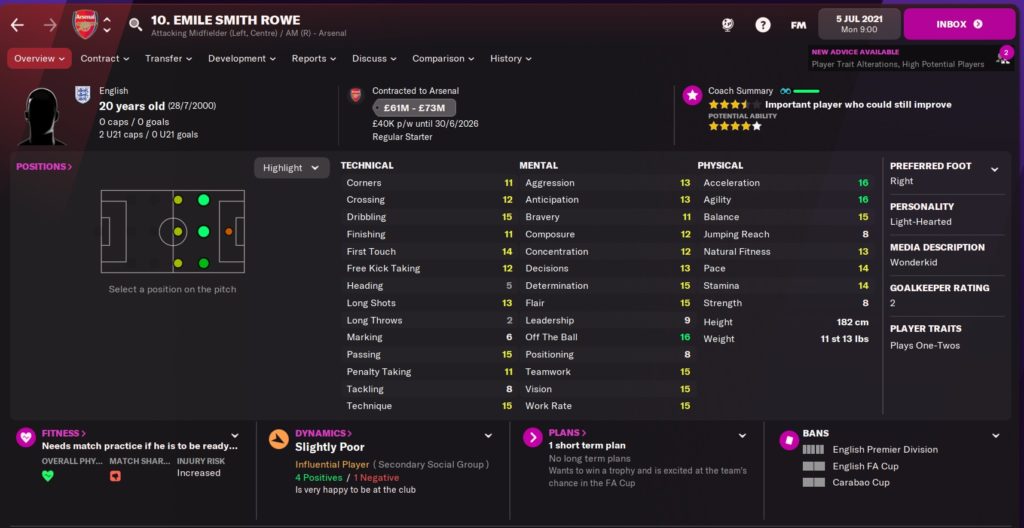 The other main alternative here, Emile Smith-Rowe, is another excellent option, more adept to drifting inside into little pockets of space and using his playmaking abilities to create opportunities for his teammates in the style of an advanced playmaker. While there is no doubt that he can play this role, as a natural out on that left flank, I personally see his future lying more centrally.

As for the other two options listed here, I see Eddie Nketiah as being much more suited to playing up top as backup to Gabriel Jesus, whilst I don’t think Reiss Nelson will be up to being much more than backup throughout the first season should you choose to rotate Smith-Rowe and Martinelli. Being homegrown, he could be an asset should he be given a CA and PA boost on the new iteration, which he could potentially be given due to his good form out on loan at Feyenoord last season, but it is last chance saloon for the winger. 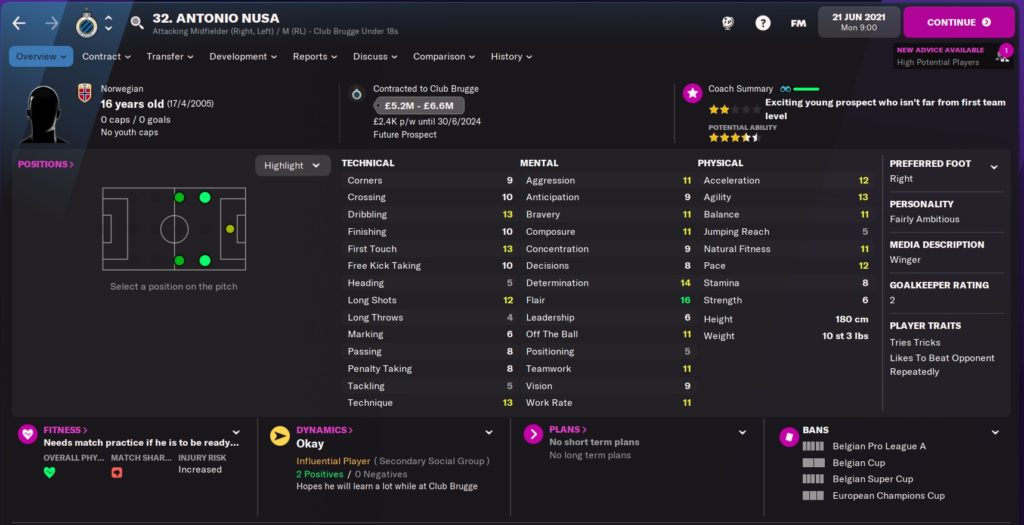 Until the new game is released, we can only guess at and dream of the new wonderkids that will turn up and dazzle us all as we pick them up for pennies and guide and nurture them into world beaters. One such player is Antonio Nusa, a 17-year-old winger that Club Brugge snapped up from Stabaek in Norway, who scored on his Champions League debut for the club against Porto. Almost guaranteed an upgrade given how quickly he’s adapted to more first-team football, Nusa was already a good option on FM22. Able to pick up for less than £8million, his dribbling (13) and first touch (13) can help to compliment his flair (16) and if you can work on his pace (12), acceleration (12) and finishing (10) then you could have an excellent inside forward on your hands. 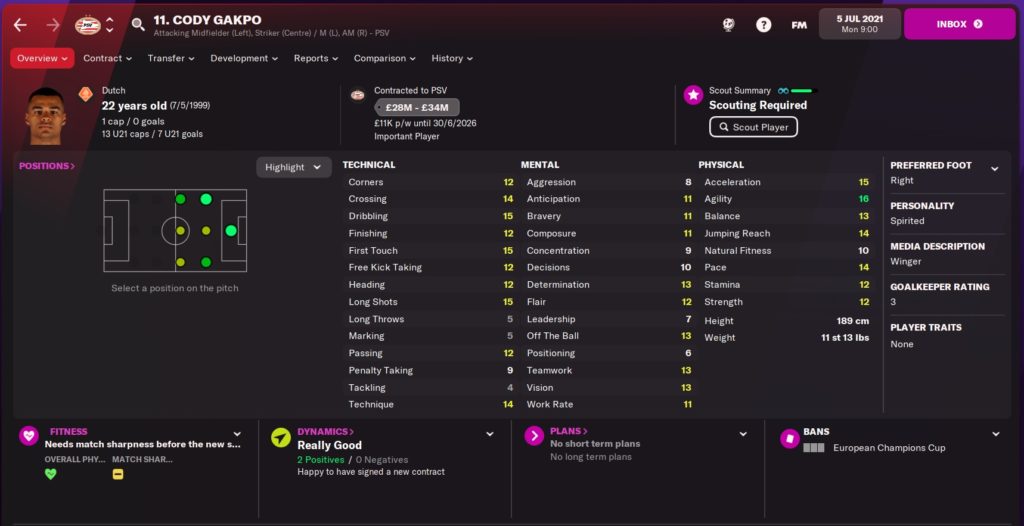 After a deadline day deal taking the Dutch winger to Leeds failed due to the manner in which the proposed deal was structured, the quality of clubs with which the 23-year-old is being linked has stepped up a notch, which may leave the Yorkshire club ruing what could have been. Now linked with a January move to the Emirates (and Old Trafford) in real life, he could prove to be a very shrewd signing virtually as well.

Likely to be given a boost on the new game, an increase to his dribbling (15), first touch (15) and finishing (12) all seem deserved, although his 8 goals in his first 8 games of the season may have come too late to make an impact on his attributes. Should his physical stats improve a little, and his composure (11), then you’ll have an excellent inside forward on your hands, even if it might be ideal for his goalscoring attributes to improve a little. Listed as being available for between £28million and £34million, if it’s a similar price bracket on the new game then you could potentially snap up a bargain. 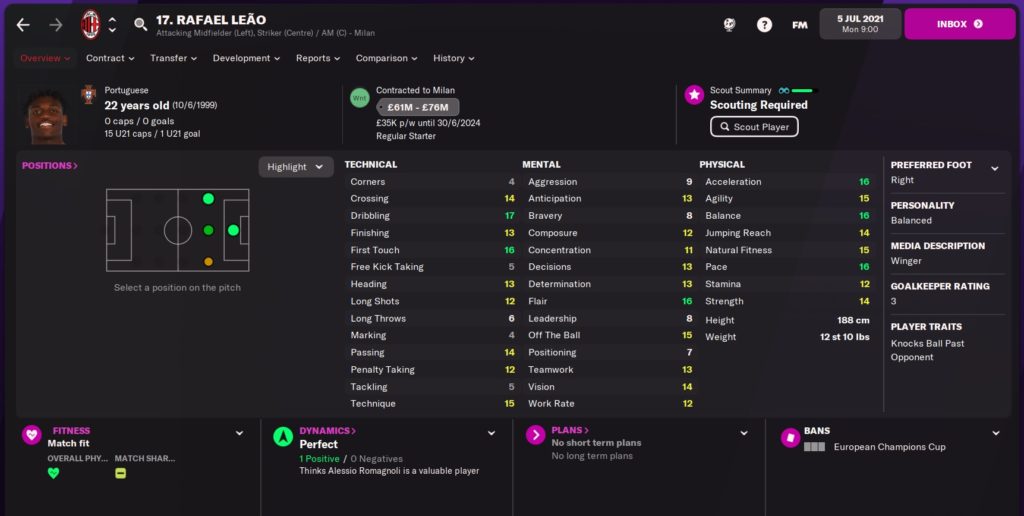 Having been voted Serie A’s MVP last time out, as he helped lead I Rossoneri end an 11-year league title draught, one thing is for certain – Rafael Leao will not come cheap. Listed as being available for £61million to £76million, it’s highly likely that they will be asking for there or thereabouts this time out as well, if not more. However, still just 23, time is on your side, and Leao’s contract has just two years left on it. Whilst it is of course possible that he will choose to extend it, should you be willing to play the long game and unsettle the Portuguese winger (who can also do a job up top if required), then you might be able to sign him for a cut price fee in the summer of ’23, or snap him up on a pre-contract in the January if you can persevere with Martinelli and Smith-Rowe until then (which is hardly an awful proposition).

Looking at his attributes, which I wouldn’t be surprised to see improve given the season he’s just had, Leao’s key strengths are his physical stats (Pace, Acceleration and Balance (16) and Agility (15)), and his dribbling (17) and flair (16). He is also capable of picking out a pass (14). Whilst they are good, in order to really become an elite-level inside forward, Leao could do with his finishing (13) and composure (12) improving slightly in order to become truly clinical, his sheer pace will see him given plenty of opportunities, even if he doesn’t take quite as many of them as you’d wish! 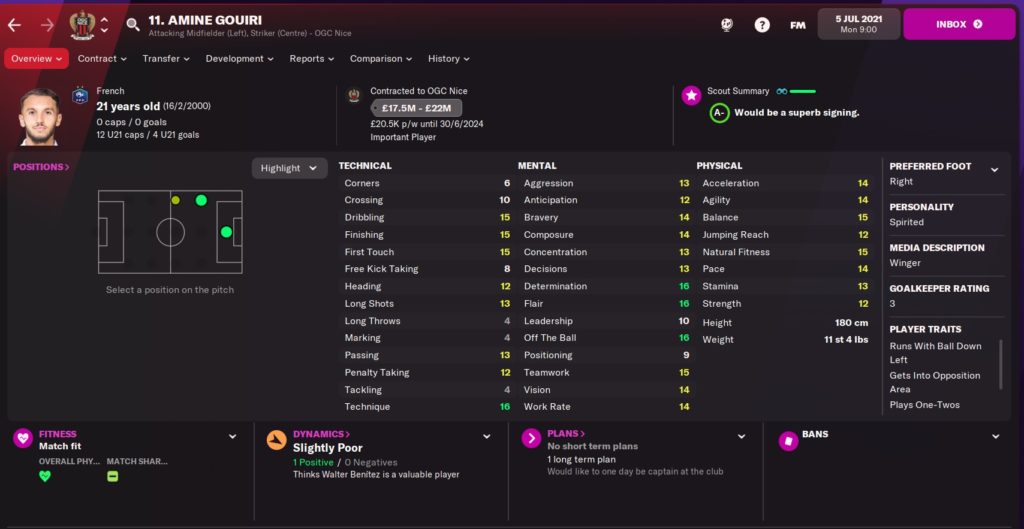 Again, another right-footed, speedy inside forward, which is my preference (as you’ll have noticed previously by my inclination to shift Smith Rowe inside). A player I never managed to sign in FM22 due to him being just out of my budget, despite a long-term interest, his attributes are pretty much perfect for that inside forward role. With very solid dibbling (15), finishing (15), first touch (15) and technique (16), his technical attributes are spot on. His composure (14), off-the-ball (16) acceleration (14) and pace (14) all have the potential to improve given his age (22), which would turn pretty much all of his key attributes green (which I am a sucker for). A high determination is also a positive, as is his predicted transfer fee of just £17.5million to £22million.

Or rather, his predicted transfer fee WOULD have been a positive, had he not very selfishly upped sticks and transferred from Nice to Rennes in the summer, for a figure of around £25million. Signing a new 5-year-deal, it may prove to be pretty difficult to tempt Rennes to part with their new signing, who was also linked with Real Madrid, for a realistic fee – but should you be able to, he should prove to be an excellent signing if his attributes aren’t too dissimilar from last time round. 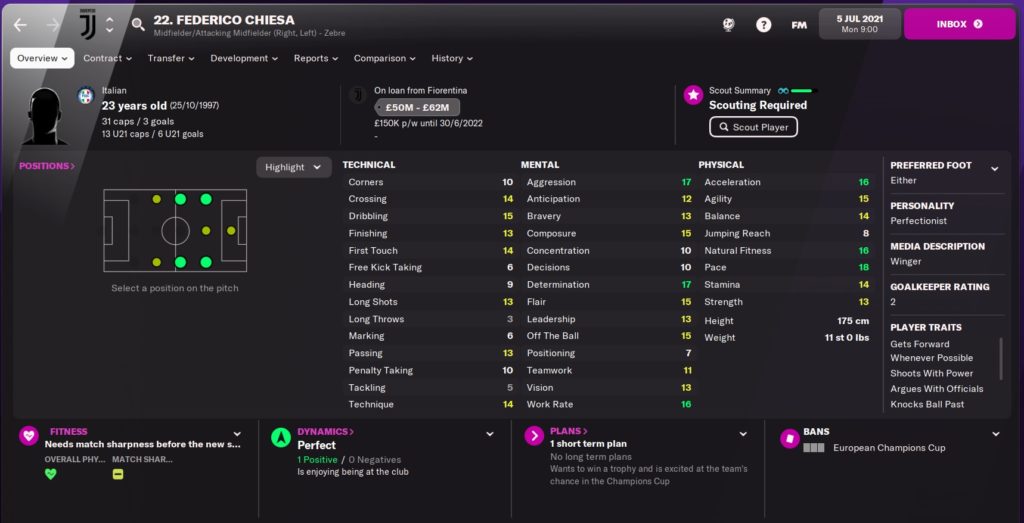 As said previously, Category C is one of the more difficult to predict on account of each save game being completely different. Whilst Juventus may opt to drop Chiesa and let him rot, never again seeing the light of day on one save, on another he may well eclipse Del Piero as the biggest legend to grace the streets of Turin.

That being said, he’s one that I would keep an eye out for being rapid (Pace (18) and Acceleration (16)), able to play on both wings and liable to become unhappy and demand a move given Juventus’ wealth of options, potentially allowing you to pick him up for a cut-price fee. A good dribbler (15), his real strengths are that he’s a grafter and will work up and down that wing all day for you with his determination (17), aggression (17), work rate (16) and natural fitness (16). 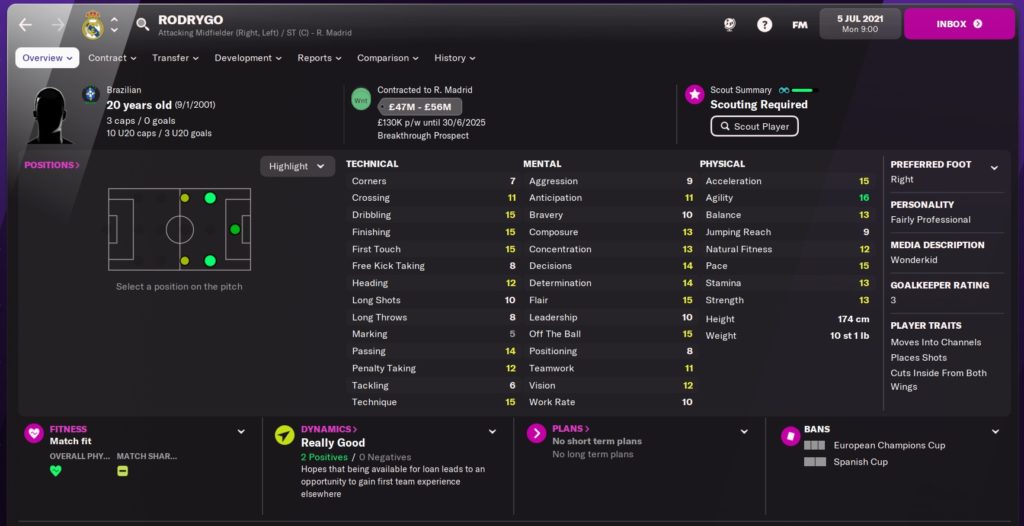 Whilst I’d keep an eye on all of the big Champions League clubs, and the players in their squads becoming unsettled due to a lack of playing time, Real Madrid has to be the best to poach players from. Given their Galactico philosophy, any potentially world-class youngster could easily see their playing time cut short due to yet another £50million signing.

Given the options that Real Madrid currently have in those wide areas, the likes of Vinicius Junior, Eden Hazard, Marco Asensio and Lucas Vazquez, as well as Federico Valverde being able to operate out on the right flank, Rodrygo is far from being guaranteed the playing time a youngster of his calibre deserves. Easy to forget that he is still just 21, despite his Champions League heroics last season and his excellent start to this season in real life, we’ve all played Footy Manager for long enough to know that this doesn’t translate seamlessly across to the game, where Carlo Ancelotti may just decide to blow £140million on Leroy Sane or somebody of that ilk.

Whilst Rodrygo is a natural on either flank, due to his ‘cuts inside from both wings’ player trait, and the fact he’s right-footed, I’d definitely see him as more of a left winger, one with a similar playing style, although higher ceiling, to Martinelli. In terms of his technical attributes, his dribbling (15), finishing (15), first touch (15) and passing (14) are all very good, and still likely to improve, which could result in an elite-level player. Whilst he doesn’t quite have the pace of Chiesa, he’s certainly no slouch, with his pace (15) and acceleration (15) arguably worthy of an upgrade in the new iteration of the game.