So, last time out I took a little look at the squad and how I expect it to shape up in the new iteration of Football Manager 2023. One thing I always try and incorporate into my saves is the philosophy of signing younger players for below their true transfer value, before selling them for bigger money later on when I have unearthed my new gem to take their place. Like a sort of Ajax on steroids, making a profit whilst improving my side, and competing for the biggest honours on the game.

Looking at Arteta’s signings over the past two years, they fall almost exclusively into three categories. First of all, we have Category A, which consists of low-money gambles that you’re almost guaranteed to make a profit on. Those players that are unlikely to make an immediate impact and will just be rotation options, if they stay around the first team squad, and may be given their chance to impress out on loan for a season or two. The likes of Marquinhos, Tavares, Lokonga and Trusty all fall into this bracket.

In Category B are those players who have been signed with the intention of having an immediate impact on the first team, and therefore command a bigger fee. These players will have been playing at a side with an inferior reputation to Arsenal looking to make that step up, whether that be within England or abroad. Fabio Vieira, Ben White, Aaron Ramsdale and Takehiro Tomiyasu all fit in this category.

Finally, we have Category C, a category that many FM players will be more than familiar with. The likes of Gabriel Jesus, Oleksandr Zinchenko and Martin Odegaard were all signed as promising youngsters by superclubs before either falling out of favour, not seizing their opportunities or not quite managing to break into a star-studded side filled with players of a higher reputation. Still young, whilst they may have considerable transfer fees, they don’t present as much of a risk as their quality is undisputed, they just need to be given the opportunity to thrive which usually comes with a move. Even if they don’t quite manage to fulfil expectations, chances are a profit will still be able to be made on them.

So, looking at Arsenal’s squad for the upcoming season, they are currently a well-balanced unit with plenty of quality all over the park. I personally wouldn’t look at overhauling the squad massively in the first window, as I prefer to have a season of relatively little personnel change before making decisions on who is of the required quality. That being said, there are a couple of areas that jump out at me as needing a little bit of TLC.

As a creature of habit, chances are I’ll play a variation of a tactic that has three players in the middle of the park. This could be any of the following (taking into account just the basic shape rather than the player roles): 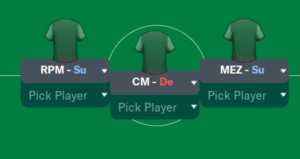 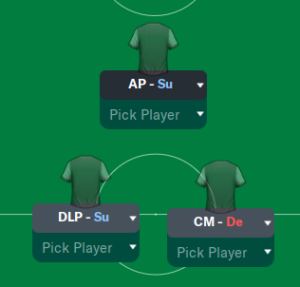 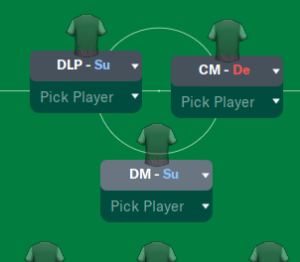 Regardless of which midfield base I decide on (which can usually change on any given day), I prefer one of my midfielders to play more defensively minded, either operating as a destroyer (who is still capable on the ball if possible), or as a deep-lying playmaker (though still more than capable of throwing in a tackle). The player most suited to this role in the current squad is Thomas Partey who I’ll be looking to flog ASAP. Personal feelings aside, he has hit 28 years old, which is when I tend to start looking at cashing in on players before they begin to decline. Obviously, there are exceptions to this, and it is more of a guideline for me than a rule, but I do like to keep my squads young and fresh. 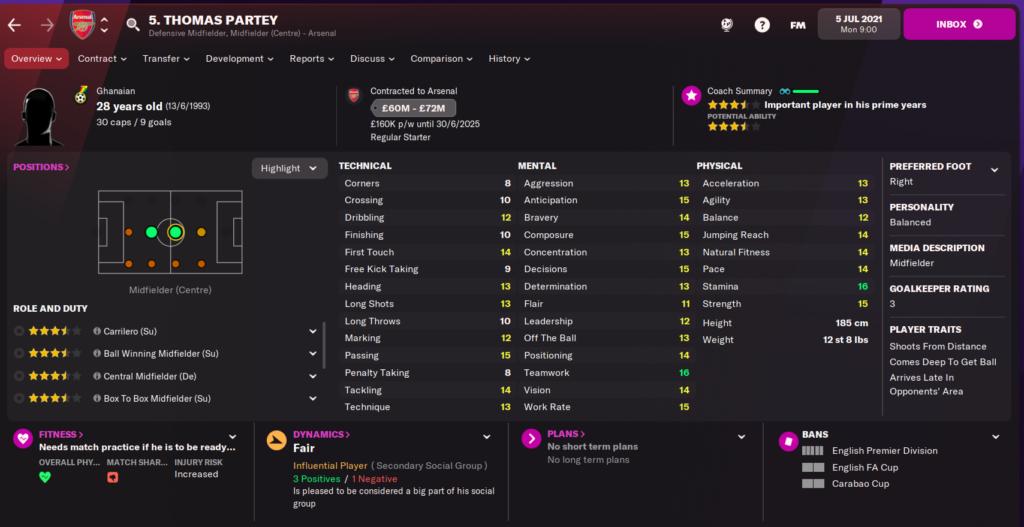 Looking at Partey’s attributes on FM22, they’re very solid without being spectacular. Best suited for either a BWM or Central Midfielder (Def) role, his high Teamwork (16) and Stamina (16) are perfect. Whilst he is lacking slightly in technical attributes (I’m a sucker for a green), his Tackling (14), Passing (15) and First Touch (14) are all key, whilst I would prefer slightly higher Marking (12) if I was to be picky. His mental attributes are all very solid.

If you do decide to keep hold of Partey for another year or three, it might be worth a gamble on one of those Category A players that we mentioned previously and give them time to grow into a first-team player. 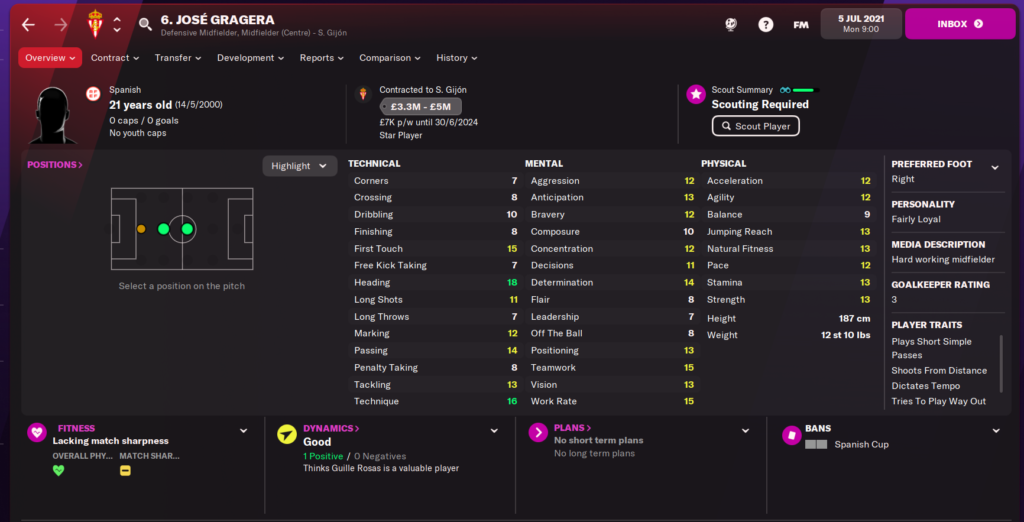 A player that has progressed through the Sporting Gijon ranks to seize the number 6 shirt, become a star player and feature for the Spanish U21 side. Whilst he may be lacking in some areas, he would be a gamble that you’re almost guaranteed to make a profit on should he fail to establish himself in your side if you’re still able to snap him up for between £3million and £5million.

His physical stats look a little on the low side for what you would need for a regular starter at Arsenal, whilst his mental stats are solid if unspectacular. With the right guidance however, Gragera still has the potential to improve, and if those tackling and passing attributes increase a couple you could have a real player on your hands. 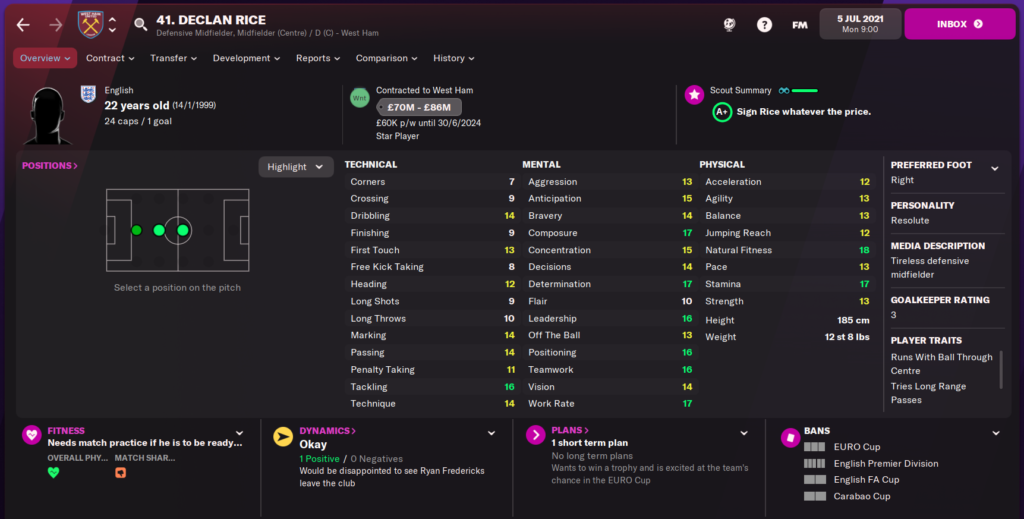 Another player that has risen through the ranks is one that needs no introduction, Declan Rice has been linked with a move away from West Ham for the last couple of years, usually to Chelsea, but as of yet one has failed to materialise. Still only 23, he fits in well with the philosophy of signing younger players, and could sit at the base of your midfield for the next decade. One potential stumbling block would be the fee, predicted at the beginning of FM22 to be between £70million and £86million, and is likely to have risen even higher for FM23. I wouldn’t be surprised if his attributed are given a little boost to go with it though, which would make him one of THE best midfielders on the game.

Excellent mental attributes, extremely solid physicals (particularly the Stamina and Natural Fitness that are key) on top of being an excellent tackler, if you can coach an extra skill point or two out of his passing and marking then you have pretty much the perfect defensive midfielder. 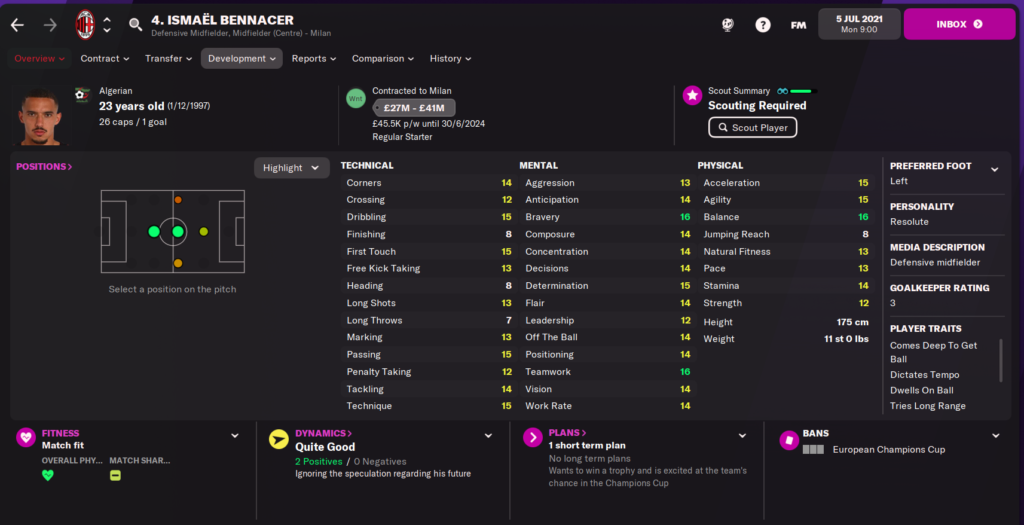 A slightly more affordable option is AC Milan’s Ismael Bennacer, who is equally adept at playing as a defensive midfielder or a little bit further forward. Something of a romantic signing, many Gunners would love to ‘bring him back home’, to the club that signed him back in 2015 before allowing him to sign for Empoli for just £1.5million two years later. Whilst he may not be allowed to return to North London for quite that cheap, a predicted fee of between £27million and £41million sounds more than reasonable for one of Europe’s top talents. Again, a very good all-rounder, with solid Mental attributes, good Physicals and tidy Technicals, if you could just coach a little boost out of him, he could be a very good option in a number of different roles. Again, it is very likely that he will have been given a boost for FM23 following an excellent season as AC Milan won Serie A. 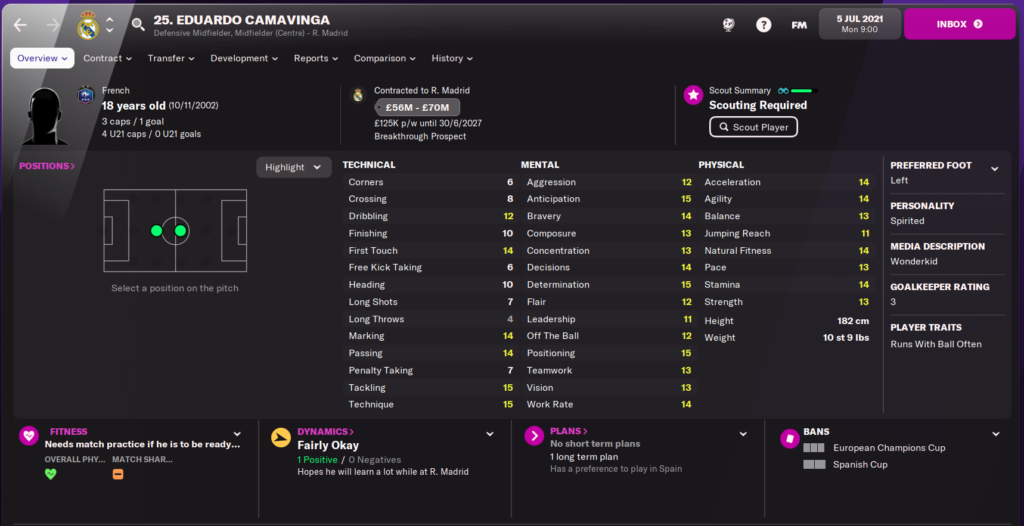 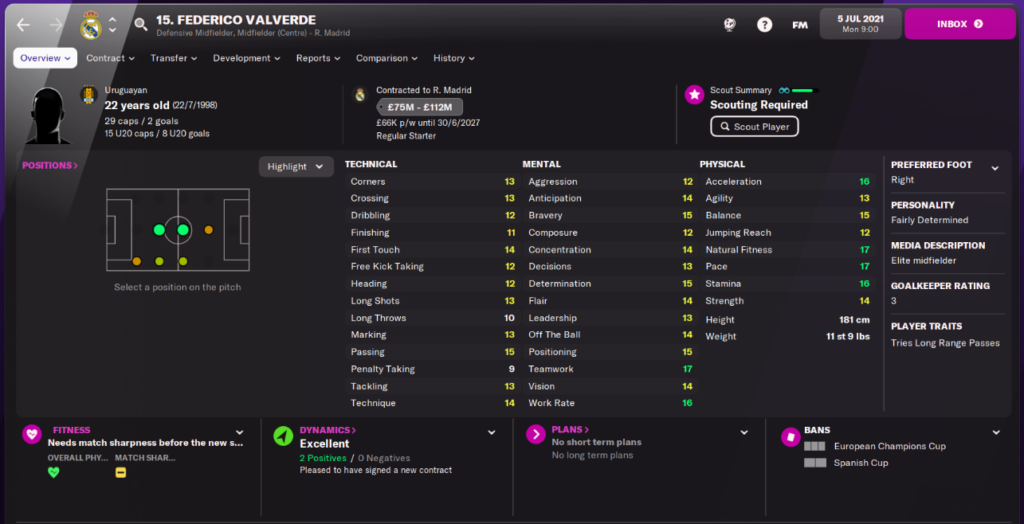 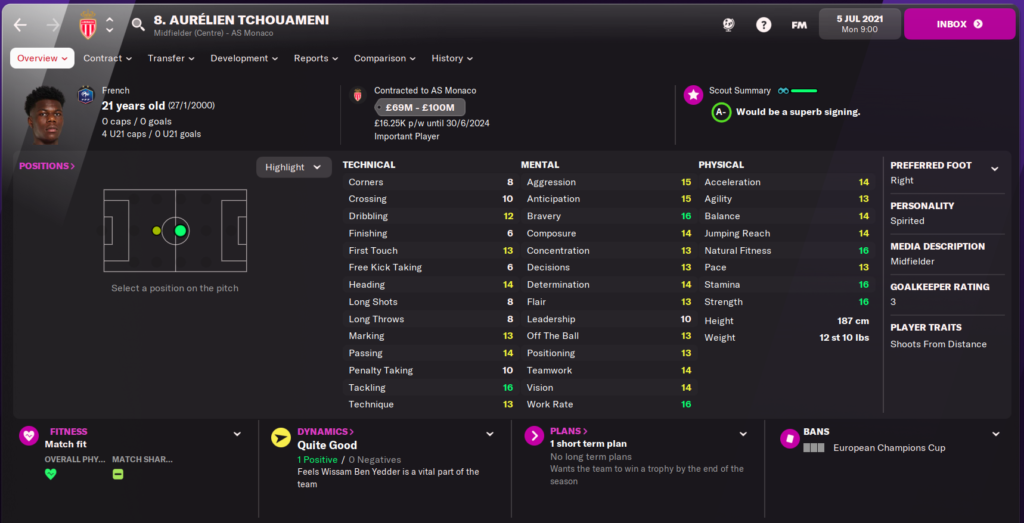 A harder category to predict as each game is different, but it might definitely be worth keeping tabs on Real Madrid’s three amigos. Whilst they have effectively built a midfield three that can dominate Europe for the next decade in real life, chances are that in the game one of them will end up unhappy over a lack of playing time in a midfield that also still has Luka Modric, Toni Kroos and, no sniggering at the back, Dani Ceballos fighting for a place in. All three should be provided with an attribute boost when FM 23 is released, and all three would walk into the Arsenal midfield should the opportunity arise. Basically, always keep your eyes peeled and keep up to date with the goings on at the European super clubs.

Whilst defensive midfield isn’t an immediate priority if you’re looking to keep Thomas Partey on board, given that he is approaching his thirties it will be a position that you will probably be looking to fill over the next few years. Of course, it all depends on your system which type of player you wish to sign, but there are a few out there that will excel in a range of them should you be willing to part with the transfer fee in order to snap them up. Make sure that you consider carefully whether you require a destroyer or a playmaker to best suit your system, and always keep an eye out for any players that become unsettled at bigger clubs that may prove to be the missing piece of the jigsaw.