Should He Stay Or Should He Go?

Looking at Arsenal’s outgoing transfers over the past couple of seasons, it looks as though they have been operating as a club with a long-term strategy for the first time since Arsene Wenger left back in 2018. Even though, on paper, they may have lost money by not recuperating much in terms of transfer fees for their older, more reputable players (the likes of Ozil, Lacazette, Aubameyang), just getting them off the wage bill will prove to be a blessing and give them more financial freedom looking towards the future.

Looking generally at the outgoings, they all seem to fall into one of two categories (yes, I know – if you’ve read my previous articles you’ll know that I love sorting things into categories), either ‘surplus to requirements’ or ‘old as fuck’.

Looking at the likes of Matteo Guendouzi, Lucas Torreira, Hector Bellerin and Joe Willock, it could be argued that they could all have a role to play in this Arsenal squad, even just in terms of rotation, Arteta has clearly decided that he has better options available to him and so to cash in.

Whilst this may not seem like a big deal, what it does tell us is that Arsenal haven’t lost any players that they haven’t chose to let leave. Gone are the days of the likes of Man City coming in to poach away their best players (or, perhaps more likely, they haven’t had any players of interest to bigger and better clubs), but regardless – the players remaining at the club are those that Arteta actually wants there. 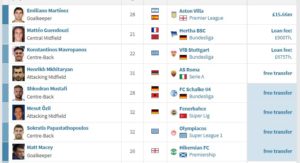 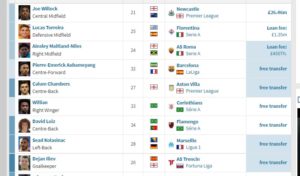 Right then, here is the part where I go through the squad picking it apart and highlighting all the players that I’d cash in on. There’s just one issue – Arsenal’s squad is actually rather good. Arteta has done a great job of getting rid of any deadwood as he’s overhauled the squad since arriving at the Emirates dugout, giving me a difficult article to write! 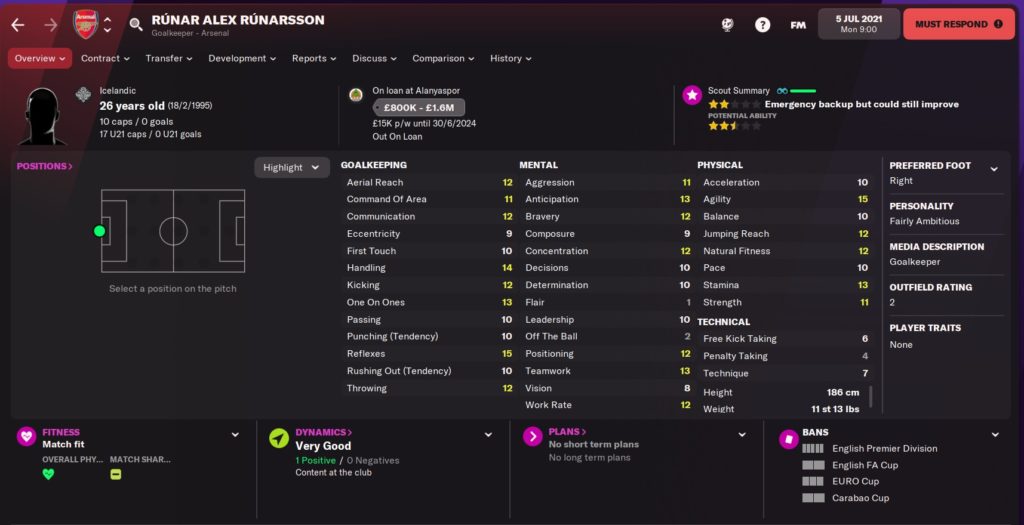 The only glaringly obvious keeper to get rid of here is Runarsson. 26 years old, not home grown, out on loan, never gonna get a game… I’d cash in and either sign a promising HG youngster or promote somebody from the U23’s.

Whilst he isn’t awful, he isn’t great either, and certainly isn’t good enough to get a consistent run of games for a top half Prem side. Once his loan in Turkey is up, I’d have a little look at how much you can get for him, and if you make a profit on his £2.2million transfer fee I’d snap their hands off.

Looking at the defenders in the squad, I think there are a few that we can safely say will be remaining in and around the squad for the foreseeable future – barring any ginormous offers you might decide to cash in on. In this list I’d include Saliba (who I think will be one of, if not THE, best young centre backs on the game), Tomiyasu, Gabriel, White, Tierney and Zinchenko.

This leaves us with Tavares, Maitland-Niles, Holding, Mari and Cedric from the current first team squad. 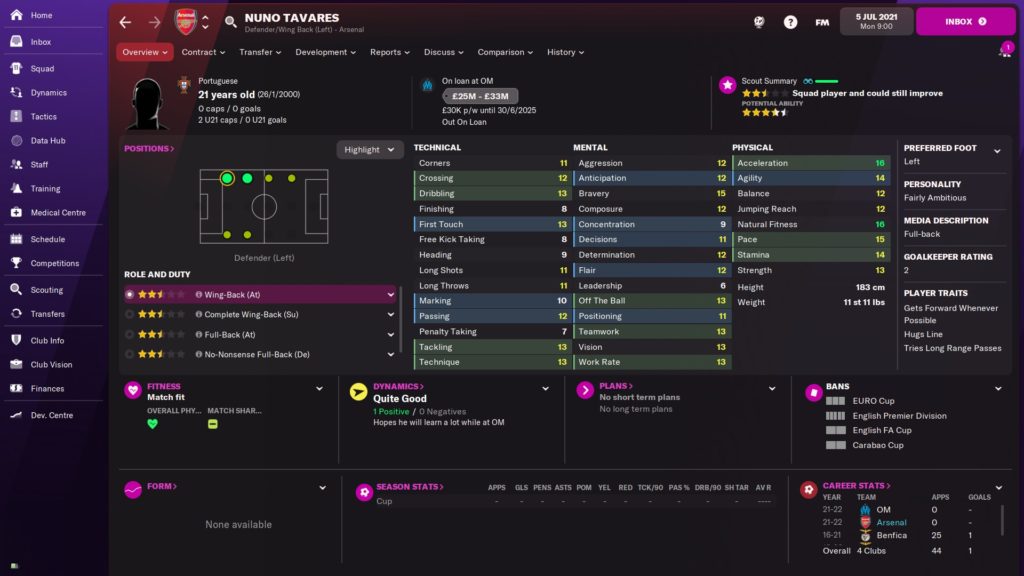 Whilst we don’t know exactly how good Tavares’ attributes are going to be in the new game, I think it’s fair to say that during his debut season at Arsenal he didn’t exactly cover himself in glory. That being said, he looks a rejuvenated player so far during his loan spell out at Marseille, which might have come just a little too late to impact his data which I presume will have already been submitted by the time he scored on his debut against Reims.

His physical attributes are all great, particularly his Natural Fitness, Pace and Acceleration, perfect for motoring up and down that left flank. Even his mental attributes are decent enough to be fair to him, with his Teamwork and Work Rate above average, but his Positioning does let him down somewhat and he is prone to lapses in Concentration.

Average technical attributes, with his Marking particularly letting him down, mean that I don’t see Tavares ever developing into anything other than a backup full back. I’d see how he fares during his loan spell at Marseille before probably cashing in on him – particularly if he’s valued at anywhere around the £30mil mark that the screenshot suggests. 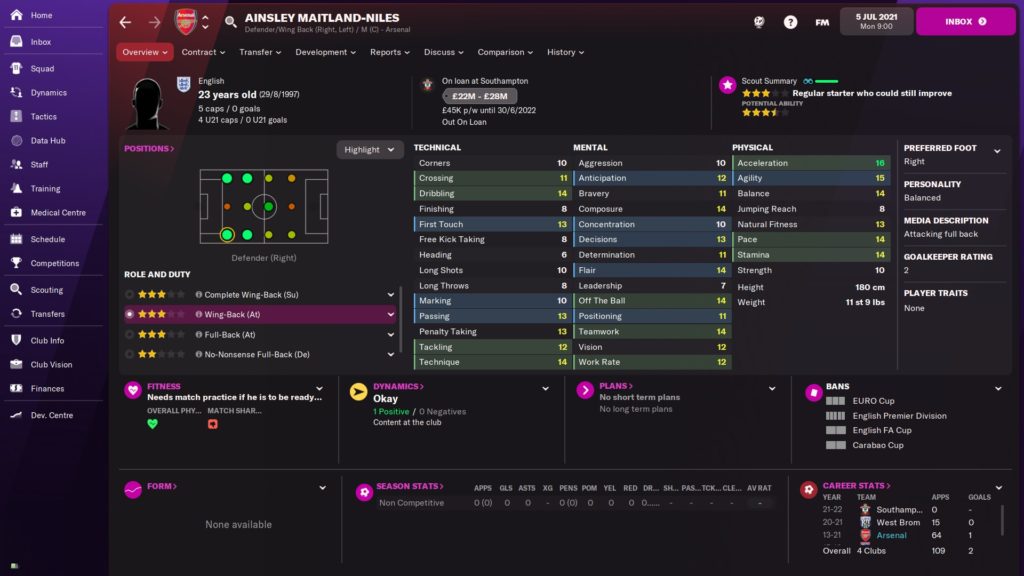 Maitland-Niles has five England caps? When on earth did that happen. A pretty similar player to Tavares on the opposite flank, Maitland-Niles has good solid physicals, bar his Strength being a little on the low side (as is his Jumping Reach, but that isn’t too important if he’s playing full back). Mentally, he has a couple of decent attributes, such as Off The Ball, Teamwork and Flair, but that 11 for Positioning and 10 for Concentration means that I’d struggle to trust him to do a job there consistently.

In terms of technicals, he is decent enough on the ball and can keep hold of it, with a good dribbling ability, but again his marking just lets him down. All in all, given his versatility and the fact he’s Homegrown at the club, I’d probably keep him around for a season or two after he returns from his loan spell at Southampton and see how he does. 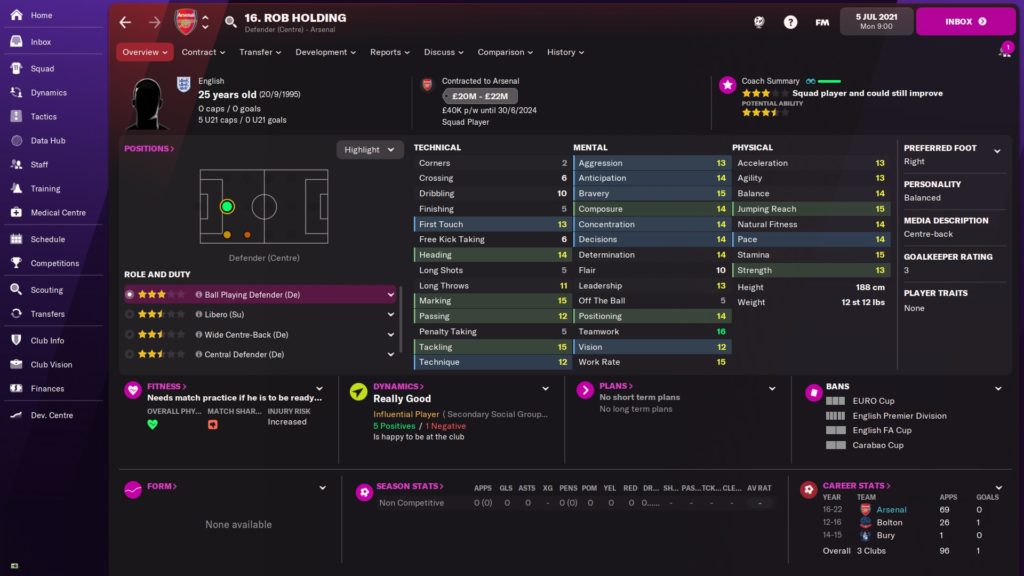 Now aged 27, Rob Holding never quite made the step up that Arsenal fans would have hoped when they signed him from Bolton. Having been little more than backup for the majority of his time at the Emirates, he’s only managed to feature in more than 15 Premier League games in one season, back in 20/21, which was his big chance to secure a starting berth for the season after. Having failed to do so, he’ll now inevitably spend another season at Arsenal before following Callum Chambers to Villa, or signing for Everton. You heard it here first.

In the game however, his attributes are very solid, and he’d definitely be one I’d keep around for the foreseeable future due to his Homegrown status and his relatively low wages. Capable of playing as a Ball Playing Defender, not many of his key attributes are below 14 across the board. Very dependable, as long as he is happy to be little more than a rotation option, he’s one I’d hold onto. 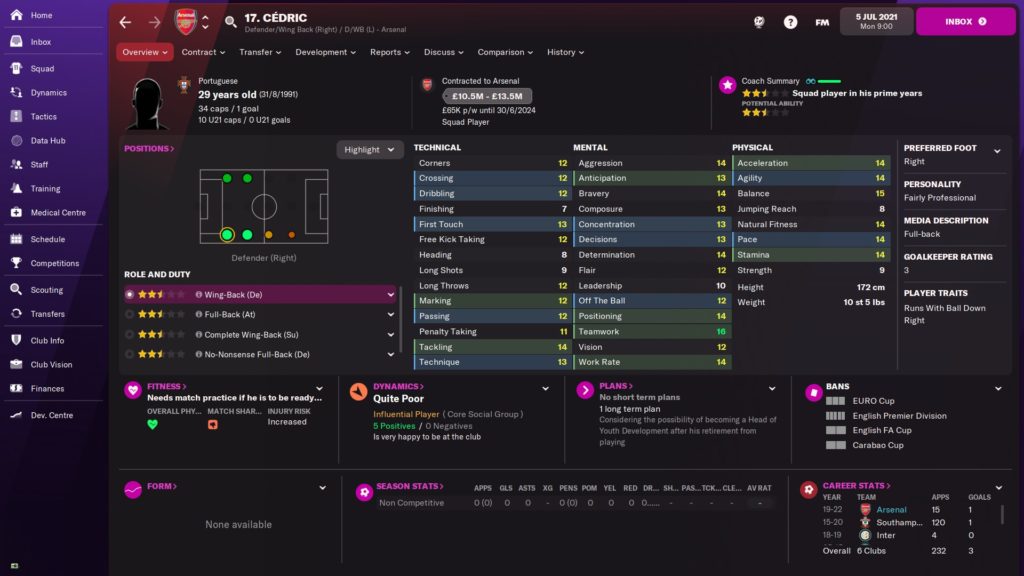 Right, so, I’ll hold my hands up here. I’d already started typing up how I’d get rid ASAP before I clicked onto him to get a screenshot. And he isn’t actually as bad as I had in my head. A pretty solid backup actually. He’s never going to earn himself a starting role, but he isn’t actually that bad and is a better all-round full back than Maitland-Niles.

However, you have Tomiyasu and Ben White who can play there, he’s old, on a fair amount of money (65k) for a player who’s never gonna get a game, so if you can get around the £10.5-£13.5million that the game predicts then yeah, I’d cash in. 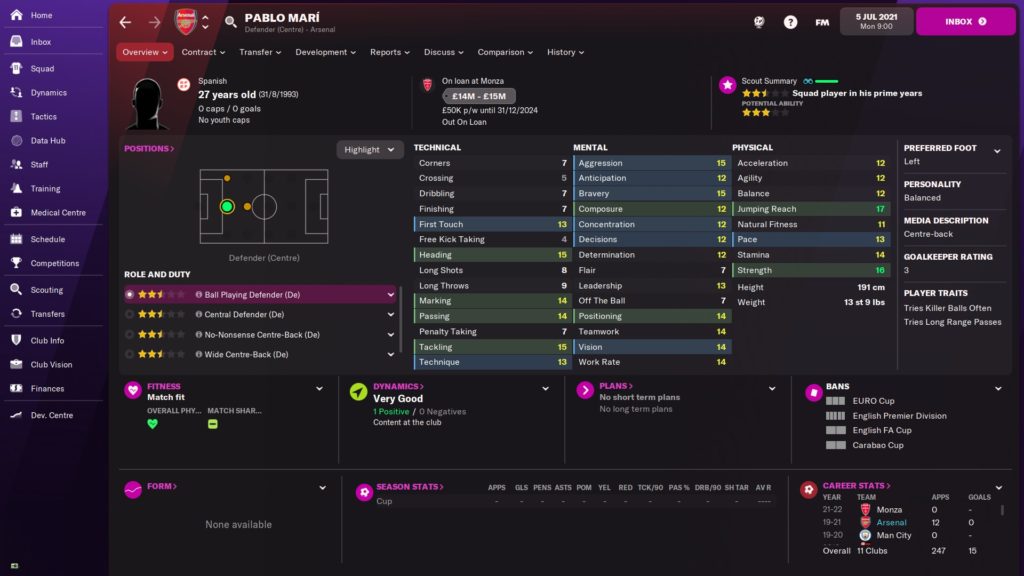 Another pleasant surprise, Pablo Mari is also pretty decent. Excellent in the air, as you’d expect, but he could also provide decent backup as a Ball Playing Defender as well. The only issue, really, is his age (29 at the time of writing), and the fact he’s out on a season long loan – so will be 30 by the time he returns. Due to this, I’d keep Holding around and cash in on Mari. Hopefully he has a good season out at Monza, and you can make a profit on the £9.75million that the Gunners spent on him.

All in all, I think that Ramsdale and Turner are good enough keepers to be your No. 1 and No. 2 for the next season or two, and I’d be looking to get rid of Runarsson and bringing in a Homegrown 3rd choice keeper to help meet the squad registration rulings.

In terms of defenders, with the idea of using a back four, I’d be happy with Tierney as my starting left back, with both Zinchenko and Tomiyasu being capable of filling in there if needed, even though they might be mostly used elsewhere. This means getting rid of Tavares when he returns from his loan spell at Marseille, particularly if you can get a decent amount of money for him.

On the right flank, I think Tomiyasu would be first choice, although it could potentially be Ben White depending on how suited to the position his attributes make him for the role, but he’s been doing a pretty decent job in real life. I’d cash in on Cedric due to his age, and potentially Maitland-Niles as well, but he could prove to be a useful squad member due to his versatility and Homegrown status. It might be worth retraining Rob Holding to operate there should you wish to release Maitland-Niles.

At centre back, any combination of Saliba/Gabriel/White should be good enough for your first season or two, at which point I suspect you might have to look to bring in a really top-level defender to partner Saliba. I’d keep hold of Holding for as long as he wants to stick around as backup, meaning Pablo Mari would take a trip onto the transfer list.

The post Football Manager 2023 Arsenal FC Defensive Edition: Should He Stay Or Should He Go? appeared first on Football analysis, news, betting and opinion from Arsenal.