As we get closer to the release of Football Manager 2023, it is time to have a look at how some of the biggest clubs in the world will look in the game. From those big clubs, Chelsea is perhaps one of the most interesting saves to take on. In real life, the Blues are going through a turbulent time. After a poor start to the 2022/23 season, Thomas Tuchel was replaced by English manager Graham Potter. Although Tuchel brought trophies to Stamford Bridge, this success was not sustained. In FM23, the objective is to take Chelsea back to the top of world football with consistent success, nationally and internationally.

Before beginning a new save with Chelsea, or with any team for that matter, it is key to conduct an initial squad assessment. This assessment will dictate your next steps, whether that is laying out your transfer strategy or drawing up your tactical plans. This article will do just that – provide a complete and thorough analysis of Chelsea’s squad heading into FM23.

In order to maximise the relevancy of this analysis, we will be using FMInside’s latest transfer and squad updates for FM22. This will not only allow us to examine the ins and outs of Chelsea’s squad in the actual game but also consider the latest updates. In addition to transfers, FMInside’s update includes the latest contracts and staff additions (with the exception of Tuchel’s recent sacking).

In this context, this article will provide a detailed insight into Chelsea’s squad, considering factors such as team dynamics, age profile, contract lengths, youth prospects, and quality. Obviously, players’ ratings and attributes along with PA/CA (Potential Ability and Current Ability) will be different in Football Manager 2023, so it is important to keep that in mind.

It is important to understand the culture and objectives of a new club before embarking on a new save. Similarly, we will consider the board’s expectations before beginning our Chelsea squad assessment, as the board’s demands will dictate our short and long-term planning.

It is important to note that at the beginning of FM22, Chelsea were still under their previous owners. Consequently, it is unclear to what extent this will change Chelsea’s culture and objectives in FM23. Nonetheless, the overall objectives should not be expected to change much, especially for a club of Chelsea’s stature.

As of now, the culture at Stamford Bridge is quite general. As with all big clubs, the board expects you to play attacking and entertaining football. While this is primarily a concern for the tactical side of things, it is still important to consider it when assessing the squad and its characteristics. 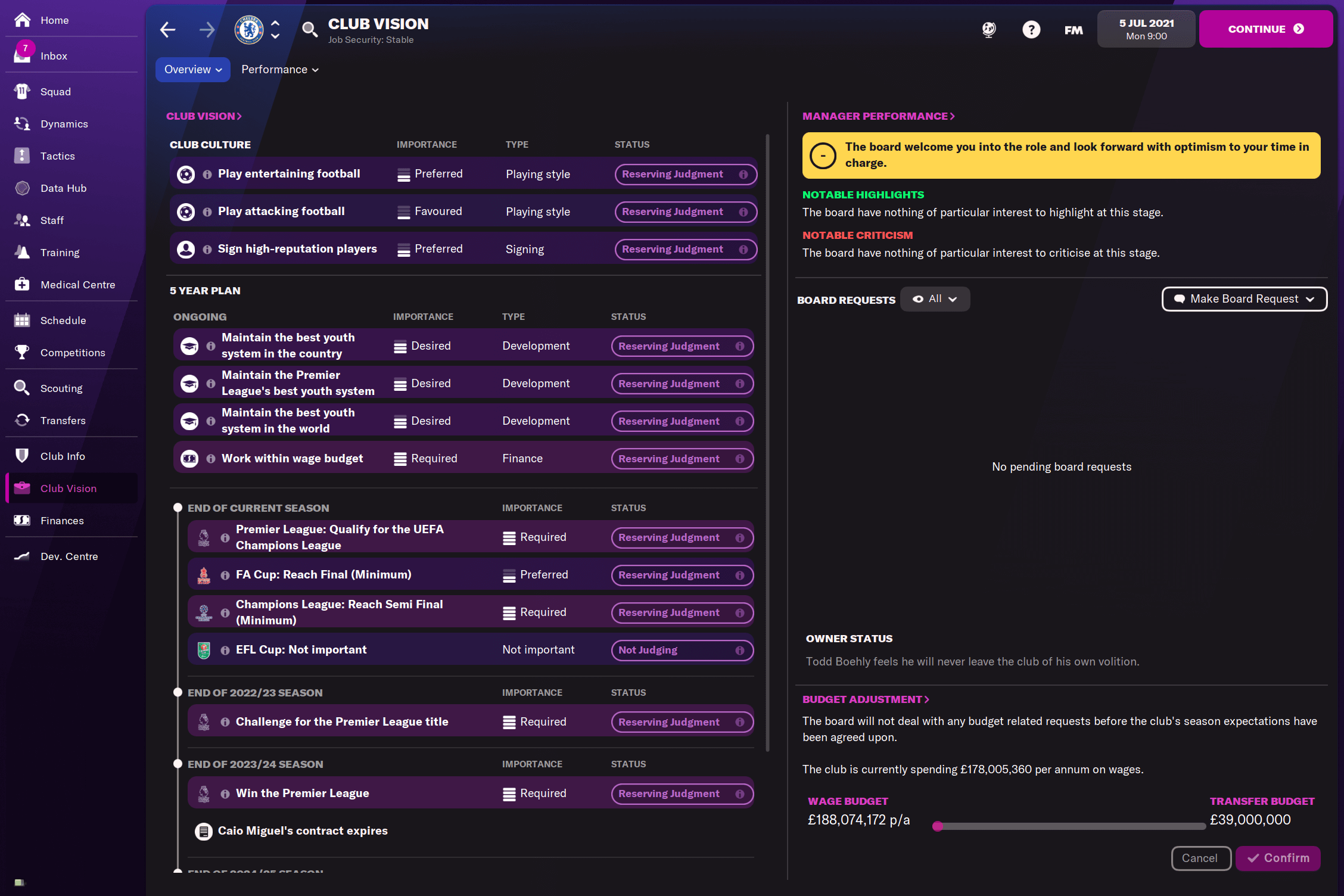 The balance expected regarding the squad’s age profile is very interesting. While the board does not specifically ask you to develop players using the club’s youth system, ensuring the academy’s reputation as the best in the world is important. There are many factors behind the academy’s reputation, but ensuring its graduates go on to the elite of world football is one of the most significant. In addition to youth importance, signing high-reputation players is also preferred. Consequently, there must be a healthy age balance between high-reputation players in their prime and rising academy talents.

As far as objectives, the demands are high but not surprising. Nationally, finishing in the top-four of the Premier League is required while reaching the final of the FA Cup is preferred. Internationally, however, the expectations are high as you are required to reach the Semi Final of the difficult Champions League. In future years, the board wants to challenge and win the Premier League.

With all these factors in mind, we are now able to accurately assess the squad. The club’s culture and objectives will be at the forefront, directing our perspective when examining the players’ profiles and characteristics.

Before going through each section of the squad, there are some general characteristics worth considering. By clicking on the Squad section and selecting Comparison under the Analyst Report tab, we are able to examine various statistical averages about the squad in comparison to the rest of the Premier League. Although we will later use this to observe each of the team’s four positional sectors, we can also use it to gain general knowledge about the players and their characteristics.

The graph below looks at the Blues’ technical averages in comparison to the rest of the Premier League. As expected, Chelsea rank above average in most categories, especially defensive ones. However, for categories significant in the final third, such as crossing, dribbling, and finishing, the Blues are barely above average. 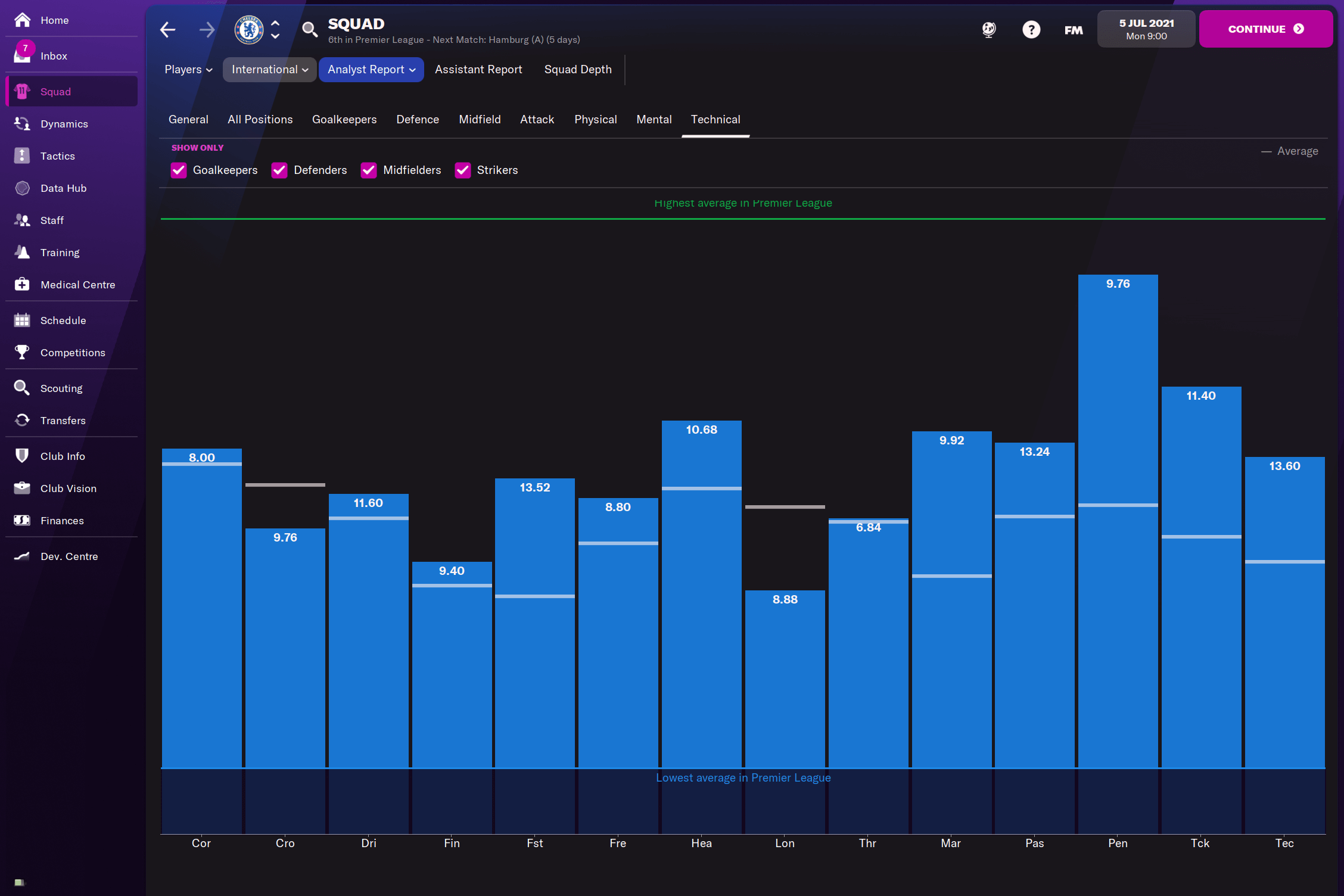 While the squad underwhelms technically, it looks incredible mentally. Chelsea is well-above average in all categories, including four where they lead the league. This high level of mental attributes will see your players perform well under complex tactical systems, an important trait at a club like Chelsea. Additionally, traits like leadership and determination will prove important in integrating and developing youth players. 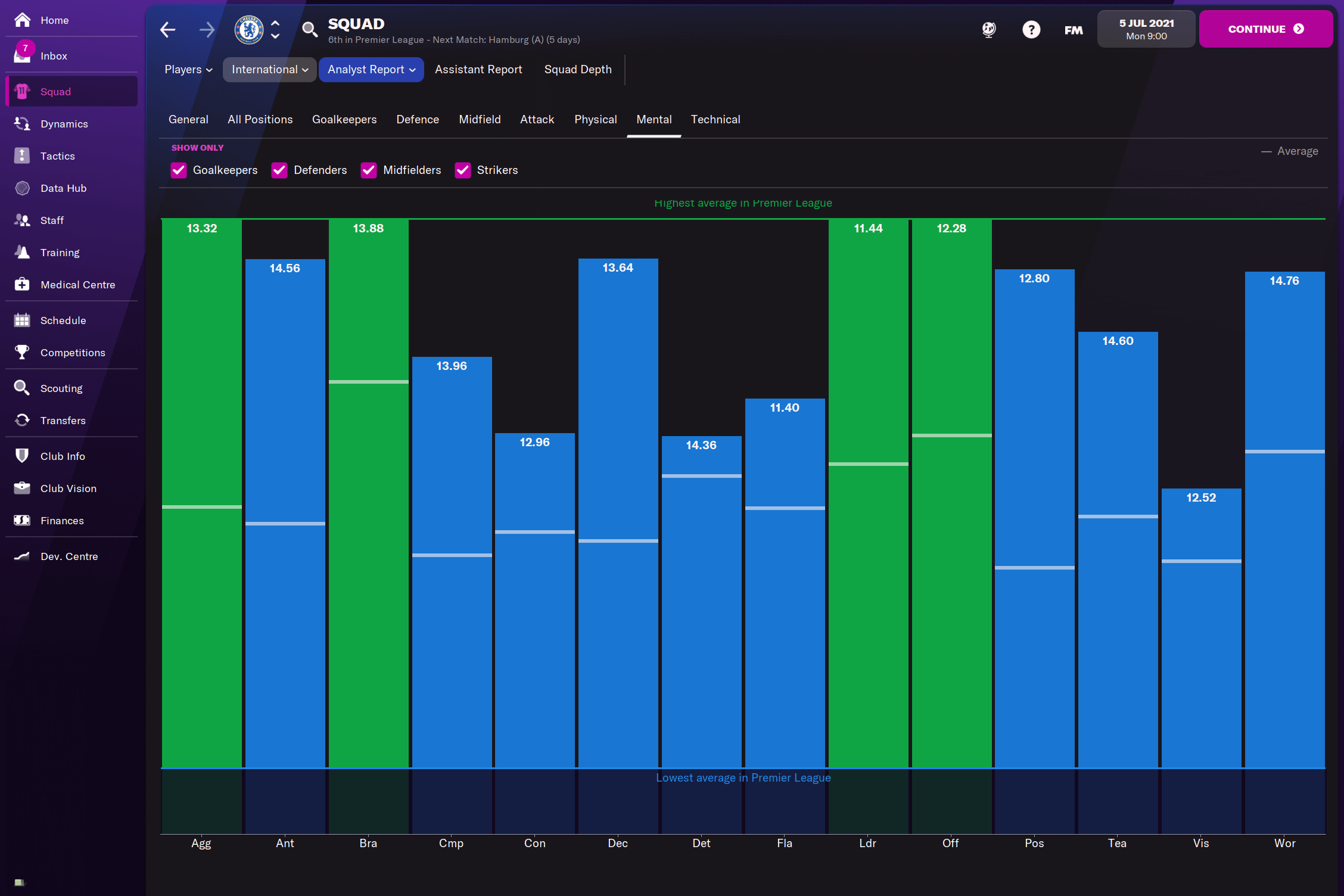 Finally, there is much to be happy about physically. Again, the team ranks well-above average in most categories. For Chelsea, an intense and physically demanding tactical setup, at least defensively, is certainly expected. This should be no problem as the squad generally possesses all the required attributes. 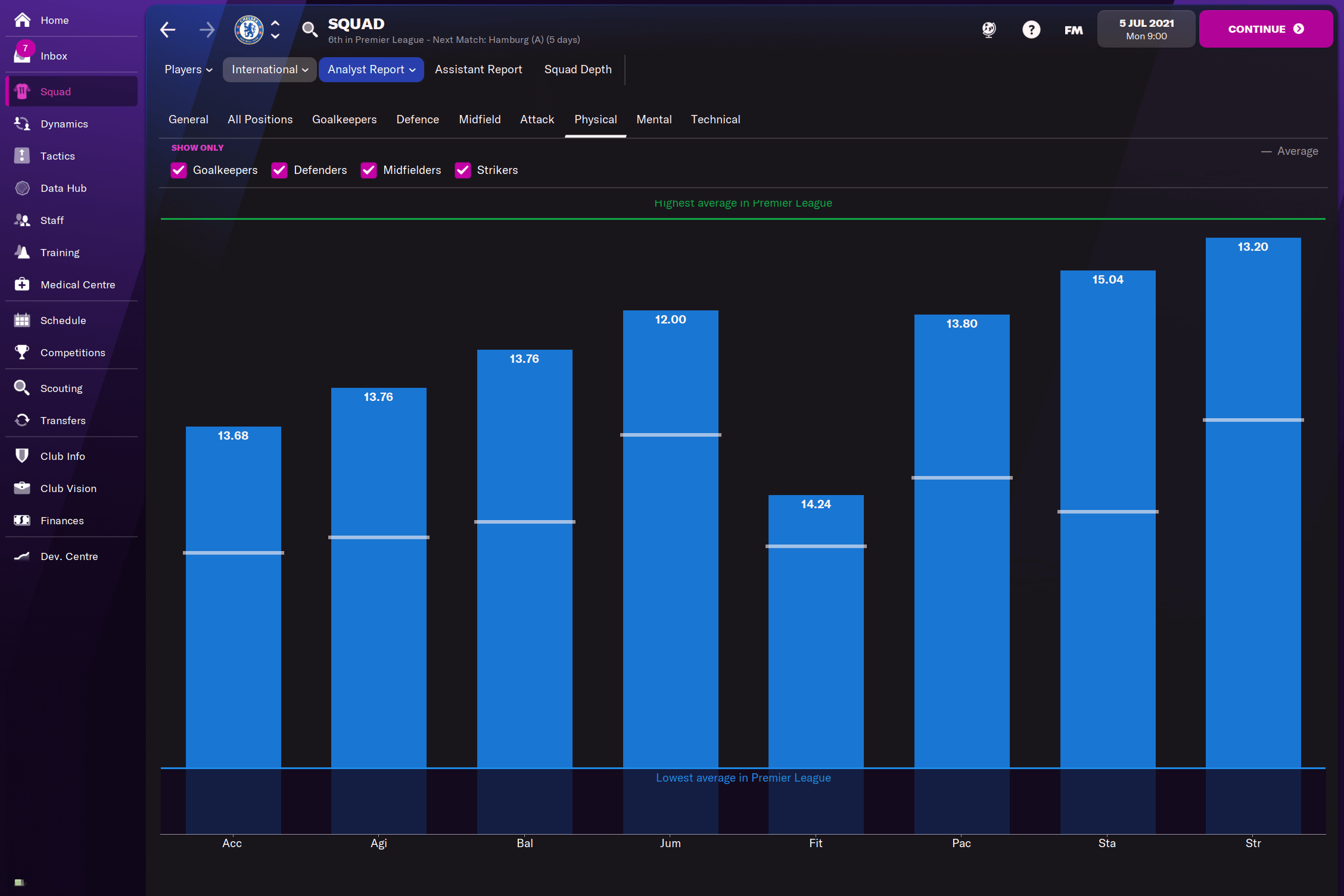 As in real life, Football Manager is a complex game where multiple factors combine to influence a team’s performance. Examining these aspects individually is helpful to gain a detailed understanding of your squad’s general profile. However, it is important to consider how they all interact when looking ahead to squad management and tactical plans.

After understanding the general characteristics of the squad, we are now able to look at each section individually. In addition to examining the depth at each position, it is important to consider the general profile of the players as well as how the future looks. To begin with, we will look at Chelsea’s goalkeeper situation.

Considering the prime years for keepers are slightly different, there is not much to worry about at Stamford Bridge. Marcus Bettinelli and Édouard Mendy will both be 30 years old at the start of FM23, and Kepa Arrizabalaga will be a few months from turning 28. With Kepa and Mendy both having contracts until 2025, there is not much to worry about immediately. On the other hand, Bettinelli’s contract expires at the end of the first season. Consequently, there is a choice to be made.

For a third option, Bettinelli serves his purpose very well. However, there are no promising goalkeepers coming through the academy. Whether you wish to keep or release him is up to you but acquiring a young and promising keeper over the next few seasons is extremely important. While there is no immediate action required, it is important to start looking ahead to life after Mendy. 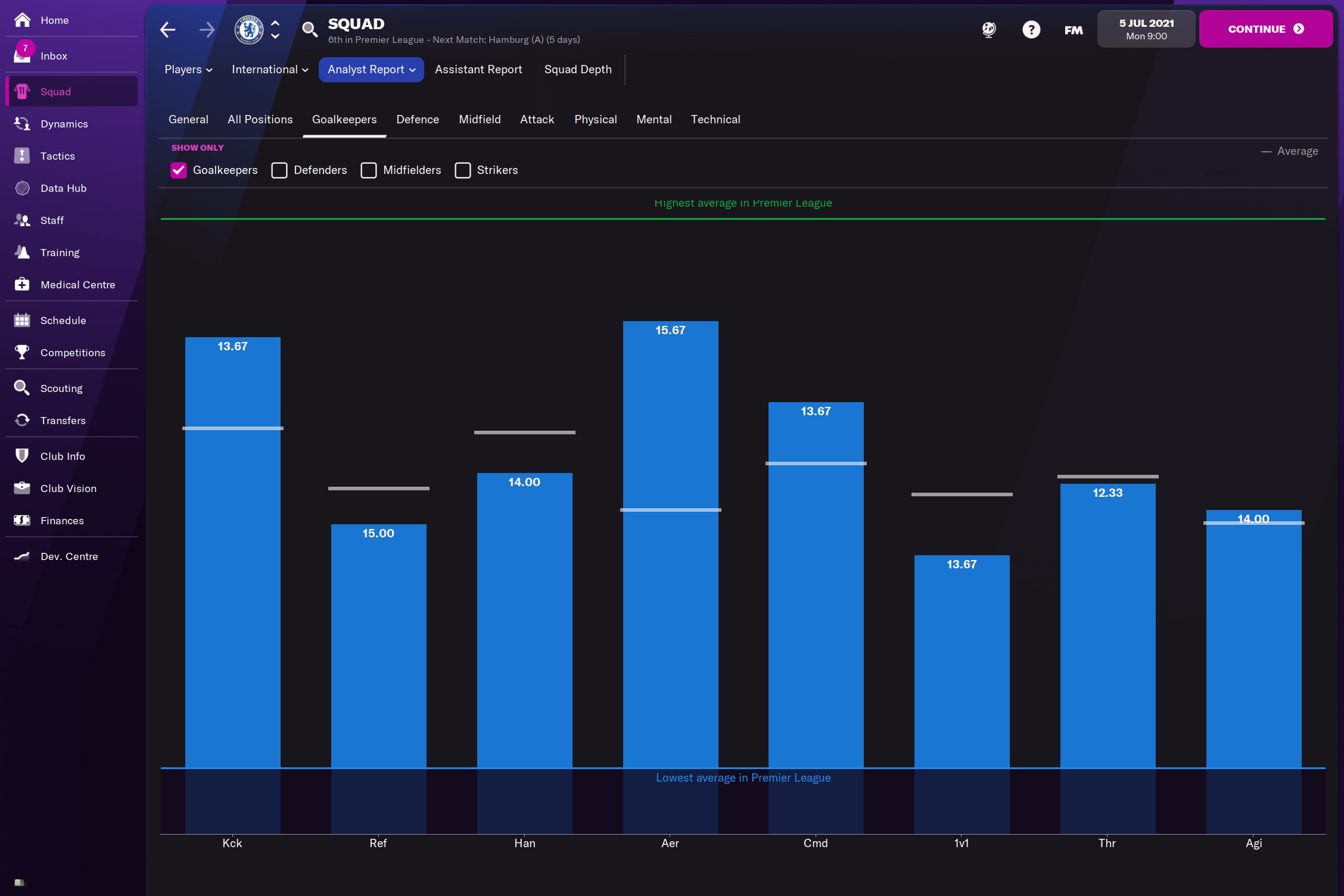 When looking at the goalkeepers’ attributes, there are no alarming issues. Together, the three players rank near average in every category. Individually, Mendy is one of the best goalkeepers in the Premier League, and should he stay healthy, these averages will not mean much.

On paper, Chelsea have some of the best defenders in the Premier League. As seen in the graph below, the Blues’ defenders rank well-above average in nearly every category, even leading the league in three. The only issue is their aerial vulnerability. When looking at defenders, Chelsea have the lowest average height in the league at 181cm. As seen below, they also rank below average in jumping.

Aside from this, the Blues’ defence is near the top of the league in traditional defending attributes such as tackling, marking, positioning, and strength. Quality is certainly not an issue, at least in the immediate future. Additionally, players like Wesley Fofana and Marc Cucurella should be expected to receive an upgrade in current ability, boosting these averages even higher. 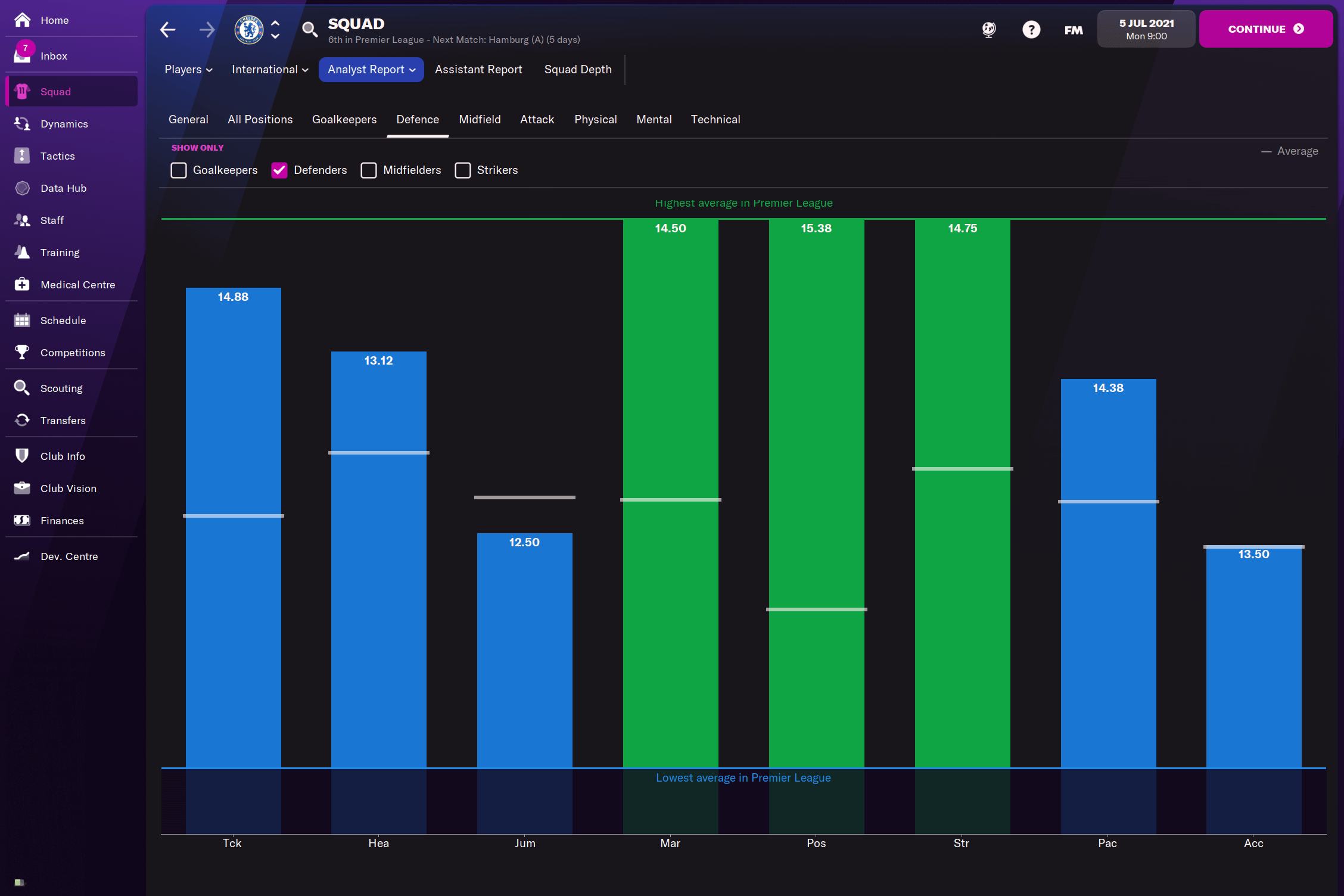 Quality may not be an issue, but the same cannot be said about depth. The Blues had a tumultuous transfer window, with a few issues failing to be addressed. Perhaps the most alarming one is the depth at centre-back. Naturally, there are four options. If you choose to play three at the back, which may be the optimal choice given the lack of wingers, this may be an issue. While Reece James and Cesar Azpilicueta can play there, that is not ideal. Addressing this either in the first or second window may be a good idea.

In the wide areas, there is both depth and quality. On the left, new signing Marc Cucurella will be there for years to come along with England international Ben Chilwell. Similarly, on the right, club legend Azpilicueta and Reece James are the two options. While a replacement for Azpilicueta may need to be looked at in the future, there are no immediate issues.

In the middle of the park, depth is far from an issue. Jorginho, N’Golo Kanté, Mateo Kovačić, Denis Zakaria, Conor Gallagher, and Ruben Loftus-Cheek are all options. However, there are still other issues to be addressed.

While Jorginho and Kanté are the faces of Chelsea’s midfield, they will be 30 and 31, respectively, at the beginning of the game. Additionally, both of their contracts will expire at the end of the first season. Consequently, a few decisions must be made there.

Age is not an issue for the rest of the midfield, but balance is certainly a big one. As seen in the graph below, the midfield lacks technically. Passing and technique are both underwhelming, highlighting a lack of balance in the midfielders’ profiles. 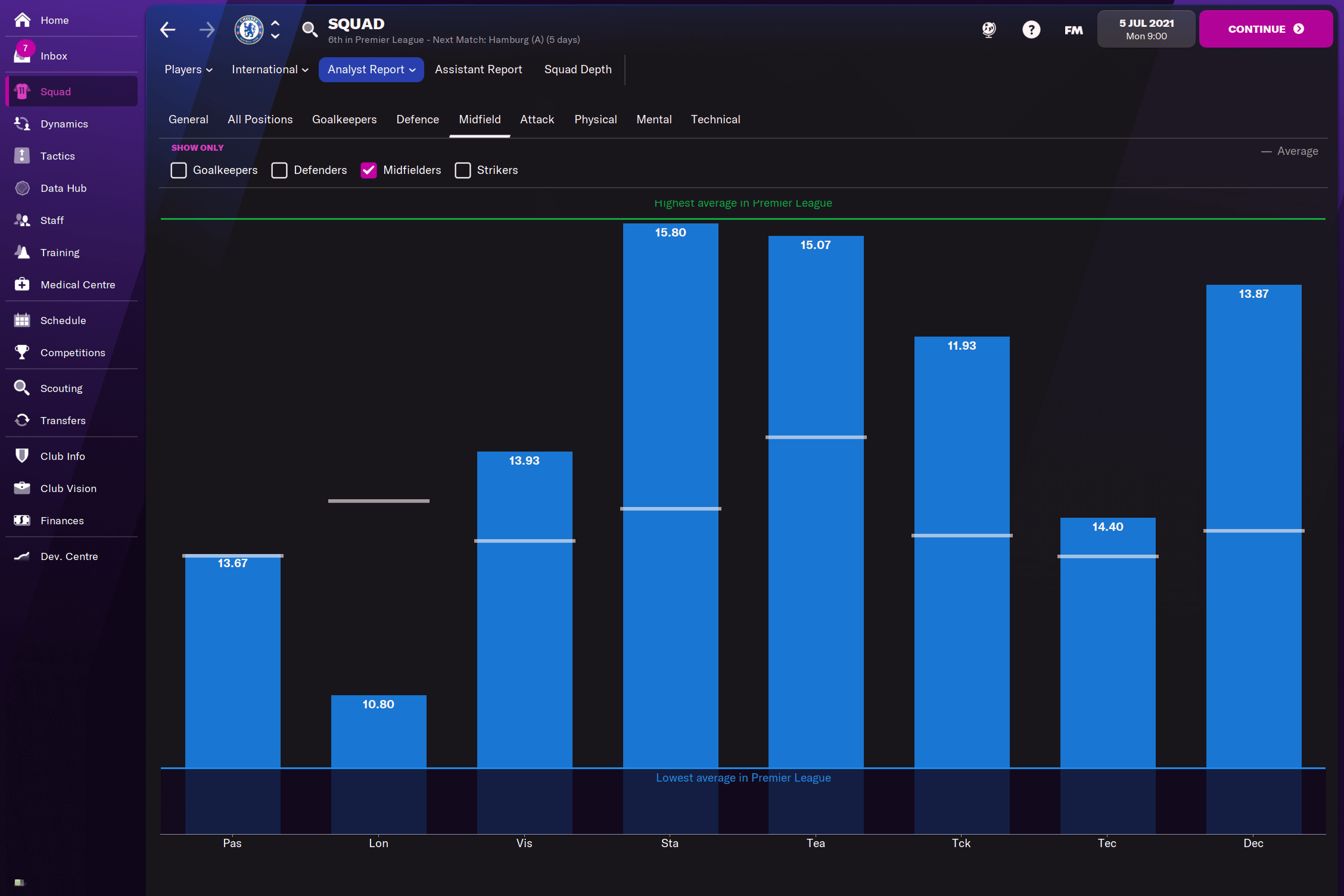 In the first year, Jorginho and Kanté’s contract situations must be figured out. This pressing issue will determine your following actions but at any rate, pursuing more technical midfielders must be a priority. The midfield will certainly be a work in progress for the first few seasons.

For clarity, advanced midfielders have been included in this section rather than in the previous one. Ultimately, your tactical preferences will dictate your strengths and weaknesses in this area. Nonetheless, there are a few issues to be resolved.

As mentioned previously, there is a clear lack of wingers in west London. Raheem Stirling, Christian Pulisic, and Hakim Ziyech are true wingers but that is about it. If you wish to use wingers in your tactics, addressing this lack of depth is necessary. If not, this is not a problem.

Similarly, Chelsea have a problem at the centre-forward position. Naturally, Armando Broja and Pierre-Emerick Aubameyang are the only options. However, Broja does not look quite ready to lead the Blues’ attack and Auba will be 33 at the start of the game. When looking at the graph below, this issue is further emphasised by the concerningly low averages in finishing and long shots. There are many ways to tackle this issue, but regardless, action is undoubtedly required. 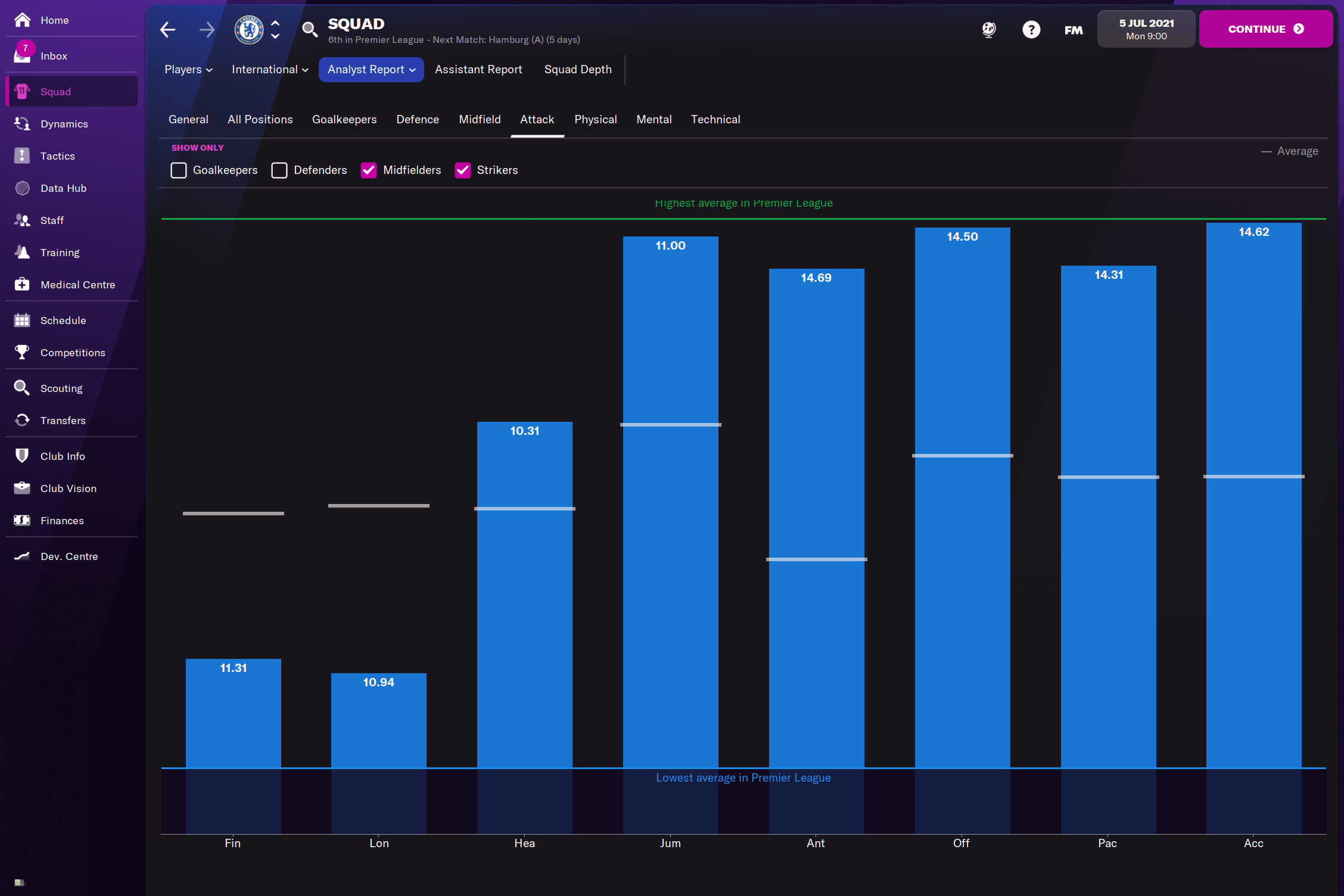 Further back, Mason Mount, Kai Havertz, and Ziyech are all naturals. Additionally, neither age nor contracts are an issue in this section. Overall, the situation in the attack is slightly confusing with a few areas to be addressed. Th centre-forward position must be taken care of, but on the wing, it depends entirely on your tactical system.

Assessing your squad at the beginning of a new save is a long but extremely important task. There are numerous factors to consider but doing this properly will provide you with a clear understanding of what to do in other areas. With Chelsea’s squad, there are a few rough areas to be addressed in the immediate future. Nonetheless, the Blues have an excellent squad to take back to the top.